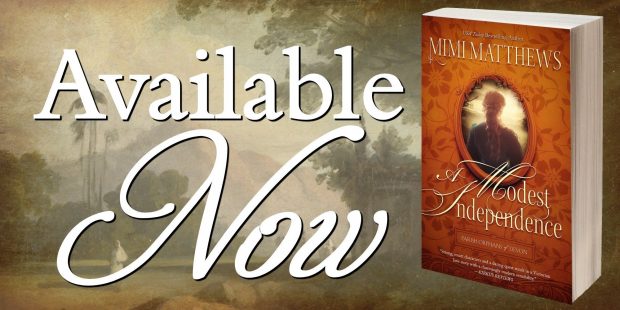 It’s release day for A Modest Independence, Book 2 in my USA Today bestselling Parish Orphans of Devon series! To celebrate, the eBook price is reduced to just $2.99 for the entire week. I’ll also be embarking on a virtual book tour next week, complete with reviews, interviews, and a special giveaway. […]Continue Reading

An 1860 edition of England’s Bedfordshire Mercury reports a “curious scene” from Paris.  An attorney was walking his Italian Greyhound on the Boulevard Beaumarchais when he realized that the delicate little dog had strayed.  Retracing his steps, he found his pet in the arms of a dog thief.  The villain had already removed the dog’s collar and identification tags and was attempting to stifle its cries.  The attorney was, according to the article, “a man of great muscular power” and quickly “mastered the delinquent.”  Once he had the thief within his grasp, he gave him two choices – he could either be consigned to the police or he could kneel down on the street and kiss the little dog.[…]Continue Reading

The Dog’s Nursemaid: An 1840 Case at the French Police Correctionelle

A September 8, 1840 edition of London’s Morning Post reports the “humorous story” of a case that came before a French Police Correctionelle.  The plaintiff in the case, a young nursemaid by the name of Virginie, is described rather flatteringly as “an exceedingly pretty little bonne.”  The defendant in the case, Virginie’s employer, a woman by the name of Madame Duchatenest, is cast in a somewhat harsher light.  Described as “a meagre and parchment-cheeked virgin,” she had been called to answer the charge of having brutally assaulted Virginie with a pair of fireplace pincers.[…]Continue Reading

Art and Inspiration: The Paintings of Auguste Toulmouche

The Love Letter by Auguste Toulmouche, 1863.

Fashionable 19th century Parisian painter Auguste Toulmouche is best known for his depictions of richly clad women set against the backdrop of luxurious interiors.  His paintings have been called “elegant trifles” and the ladies who feature in them have been referred to as “Toulmouche’s delicious dolls.”  One critic even compared the interiors of a Toulmouche painting to daintily decorated jewel boxes.  Unsurprisingly, the 19th century public had a great appetite for these visual treats.  Toulmouche’s paintings were popular, both with the upper and middle classes, and even with post-Civil War Americans.[…]Continue Reading

It is the 80th anniversary of the first Georgette Heyer Regency novel.  In celebration, throughout 2015 The Beau Monde will be posting articles on each of Heyer’s novels. […]Continue Reading