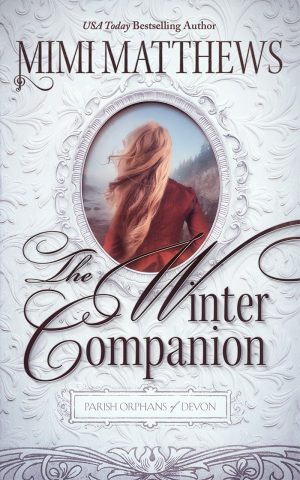 Neville Cross shut and latched the door of the loose box, giving Lady Helena’s bay mare one last pat on her glossy neck. It was warm and snug in the Greyfriar’s Abbey stable. Far warmer than the biting cold weather outside. The rain had stopped for the moment, but the sky remained dark with thunderclouds, the air pregnant with the damp fragrance of wet earth and churning sea.

Carriage wheels clattered in the distance, a faint but familiar sound. Like the Abbey itself, the stone stable block was set high atop the cliffs above the small coastal village of King’s Abbot. The road up was precarious at the best of times. In wet weather, it was positively dangerous. Nevertheless, over the past weeks, the carriage had passed up and down, from the Abbey to the village and back again, with some regularity.

The coachman was delivering guests and supplies for the month-long Christmas celebration. He never returned to the stable until his cargo had been unloaded. The carriage would simply roll by on its way to the Abbey. Neville had become as well acquainted with that passing clatter of wheels and clip-clop of horses’ hooves as he was with the sound of the driving rain.

The carriage didn’t roll on in its usual manner. Instead it slowed to a halt. The door of the carriage opened. A swell of voices followed, unintelligible in the whistling wind. And then the door shut, and the carriage clattered on again.

“Good morning!” a soft, feminine voice called out. “Is anyone here?”

Neville went still. His instincts told him to retreat. To withdraw to the feed room, or to the private rooms he kept above. It was a cowardly impulse, and one with which he regularly did battle. He had no good reason to avoid people. As long as he kept his speech to a minimum, he could manage very well in company.

But dashed if it wasn’t awkward. Especially where ladies were concerned.

He wiped his hands on a cloth, dusted the straw and horsehair from his white linen shirt and dark trousers, and slowly walked out into the aisle.

A young lady stood inside the doorway. A shapeless woolen cloak billowed about her small frame, the hood shielding her face from view. As Neville approached, she pushed it back with one gloved hand.

He stopped where he stood, his mouth suddenly dry.

“I’m looking for Mr. Cross.” Her chocolate brown eyes were large and luminous, with a peculiar sheen to them. “Neville Cross.”

On a good day, the words Neville formed in his mind could be translated into short phrases with minimal difficulty. He’d learned over the years how to keep things from getting muddled. How to say what he intended with the least fuss, even if that meant he must occasionally sound like a child.

Today wasn’t one of those days.

Not when the young lady standing before him had a face that made his heart beat faster.

It was a perfect oval, with a finely molded nose, a damask rosebud of a mouth, and wideset eyes framed by thick, gracefully arching brows that were several shades darker than the flaxen blond of her hair.

His thoughts, which were usually clear, proceeded to tangle themselves into a Gordian knot. With his brain in such a state, his speech didn’t stand a chance.

“Are you Mr. Cross?” She stepped forward, a wash of pale pink tinting the sculpted curve of her cheekbones. “Mrs. Archer said I should speak with you about Bertie.”

He stared down at her, fully aware that he must look as dumbfounded as he felt.

“Oh, I beg your pardon. I should have explained straightaway. This is Bertie.” She opened the front of her cloak, throwing it back over her shoulders to reveal a black pug dog.

A very old pug dog, by the look of it. The little creature was cradled in her left arm, its face and body liberally peppered with gray.

Neville swallowed hard. His voice, when it emerged, was many steps behind the workings of his brain. “I’m Neville.”

He could have groaned aloud in frustration. It wasn’t what he’d meant to say. Not now.

But the young lady appeared unfazed by his inarticulateness. “I’d assumed so.” She extended her hand. “I’m Clara Hartwright, Mrs. Bainbridge’s companion.”

He hesitated an instant before shaking her hand, all the while conscious of how much smaller it was than his own. Every part of her was smaller. Good lord, her head scarcely reached his chest. He felt a veritable goliath looming over her. A clumsy giant who could crush her as easily as breathing. “Mrs. Hartwright.”

“Miss Hartwright,” she corrected. “Mrs. Archer said to speak to you about finding a place for Bertie in the stable. He must be kept warm, you see. And I haven’t yet received permission to keep him in the house.”

Neville reached out to brush his hand over the little dog’s head. Bertie blinked up at him with rheumy eyes. A smile tugged at Neville’s mouth. He was often shy around people, but he understood animals. He’d always had a way with them, long before his childhood accident on the cliffs and the head injury that, even now, affected his speech. It’s why he preferred to work in the stables. Being around dogs and horses settled him. Helped to put his mind at ease. It helped his speech, as well.

“He belongs to Mrs. Bainbridge?”

Miss Hartwright’s blush deepened. “Er, no. He belonged to the previous lady I worked for. She died last month, and poor Bertie isn’t a favorite with her family. They were going to have him destroyed. I couldn’t leave him behind. And I can’t permit him to catch his death out here.”

“Yes, it’s much warmer than being out of doors, but Bertie is accustomed to residing inside the house. He’s spent much of his life on a velvet cushion in front of the fire, and I fear—”

“May I?” Neville reached for the little dog.

“Of course.” Miss Hartwright helped to transfer Bertie into Neville’s arms. “He’s very sweet and gentle. Not spoiled at all. Not like some pugs. He won’t be any trouble to you.”

Neville scratched Bertie under the chin. Bertie didn’t appear to notice. He was more than old. He was positively ancient, content to stare off into the distance and pant. Neville wondered if the little dog had all of his faculties.

Miss Hartwright moved closer. Close enough that he could smell the soft fragrance of orange blossoms that clung to her hair and cloak. “I understand you already have two dogs in residence. Mastiffs, Mrs. Archer said.”

“Are they friendly?” She gazed up at him. “It’s only that Bertie has no way to defend himself. If a bigger dog were to—”

“He’ll be safe here. I promise you.” For once, the words came out strong and sure. They seemed important somehow.

Neville’s chest tightened. Were those tears glistening in her eyes? The very thought sent a jolt of alarm through him.

“I’m being ridiculous, I know,” she said. “But might I see where you mean to put him? It would set my mind at ease.”

He turned toward the feed room. Bertie’s small body was a solid, warm weight in his arms. “This way.”

She followed after him, the wide skirts of her gown rustling over the straw-covered floor. The stable boy hadn’t swept this morning. He was busy up at the house with the rest of the staff.

Neville should be there, too. Lady Helena had asked him specifically. And he’d meant to go. But it was difficult.

It was a month-long Christmas celebration. His three childhood friends would be in residence, along with their respective wives. One of those wives—Mrs. Laura Archer—was expecting her family to join them as well. Her invalid brother, and her widowed aunt, Mrs. Bainbridge.

Neville cast Miss Hartwright a sidelong glance. No one had warned him there would be an unmarried young lady in residence for the month. And they’d certainly said nothing about her being beautiful. Or about her having a dog.

She looked about the feed room. “Where will you put him?”

“Here.” He carried Bertie to a stack of empty feed sacks in the corner. They were nothing like a velvet cushion, but when Neville lowered the pug down onto them, the little dog seemed content enough. He hobbled around in a half-hearted circle before plumping down with a grunt. “See? He likes it here.”

“Do you think so?” Miss Hartwright sounded hopeful. She crouched down beside the feed sacks, her skirts and cloak pooling all about her. “You’re all right now, Bertie.” She stroked a hand over his back, her voice sinking to a whisper. “I’m not abandoning you. I’ll return as soon as I’m able.”

Neville clasped his hands at his back, uncertain what to say or do.

“Would you please give him a dish of water?” she asked. “And I shall try and beg some meat from the cook, but if—”

She looked up at him, her eyes very bright. “Will you?”

Her face lit with gratitude. “Thank you, Mr. Cross. You’re very kind.” She rose and dusted off her skirts. “I must make my way up to the Abbey now.”

He stopped himself from nodding again. It was easier than speaking. It also made him appear some manner of head-bobbing simpleton, or so he feared. But as he struggled over what to say to her, the silence stretched taut between them, on and on, until heat rose in his face. The words simply wouldn’t come. Not the ones he wanted.

Outside, a clap of thunder rent the air. The rain began again, a light fall of it, pattering on the roof.

Miss Hartwright responded by fastening her cloak. “I can’t linger. Mrs. Bainbridge expects me straightaway.” She pulled her hood up over her hair. “Though I hope to be back soon, if all goes well.”

Neville followed her to the doors of the stable. She glanced back at him once over her shoulder before ducking out into the rain.

He made no reply. It was too difficult to muster one. He wasn’t calm or clear-headed enough. And it was her fault, however unintended. She’d flustered him. Rattled him to his core. He could do nothing but watch her stride away through the mud and rain. A small cloaked figure on the cliffs.

He heaved a sigh as he returned to his work. It was going to be a very long holiday.

« Return to The Winter Companion