Excerpt: A Holiday by Gaslight 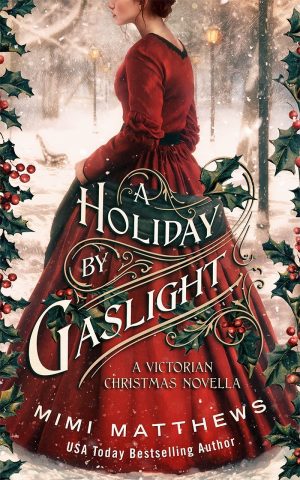 An icy late November breeze rustled the bare branches of the trees along the Serpentine. Hyde Park was practically deserted at this time of morning. And no wonder. It was freezing cold, the gray skies heavy with the scent of impending rain. Sophie Appersett thrust her hands more firmly into the confines of the oversized mink muff she wore suspended from a silken cord round her neck. “So you see, Mr. Sharpe. There’s no reason to continue as we are.”

Edward Sharpe walked at her side in complete silence. His large gloved hands were clasped behind his back, his deep blue eyes fixed straight ahead. His expression was somber. So somber that, when paired with his severe black suit, black topcoat, and black beaver hat, he might easily have been mistaken for a man on his way to a funeral.

No one who saw him now would ever believe he was one of the wealthiest manufactory owners in Greater London. And they certainly wouldn’t credit him as being part owner of not one but two separate railway concerns.

Sophie cast him a sidelong glance. He was a handsome man, if one liked tall, dark males of the serious variety, but he was infuriatingly difficult to read. He never betrayed his feelings with a look or a word. And when it came to conversation, silence was, by far, his favorite subject. During their brief courtship, she’d been obliged to do most of the talking.

In the past two months, she’d come to hate the sound of her own voice. It was always droning on and on, filling up the vast emptiness between them with magpie-like chatter. Forever talking, talking, talking, but never really saying anything.

But she was saying something now. Something she should have said two months ago. “We simply do not suit.”

“No indeed, ma’am.” Mr. Sharpe’s voice was a deep, rich baritone. He had no discernible accent. Quite the opposite. He spoke in the cultured tones of a gentleman. Where he’d learned to do so, she hadn’t the slightest idea. His parents were London shopkeepers. He’d never gone to Eton or Cambridge. Instead, he’d spent his youth delivering packages and stocking the shelves of their store.

And now he was one and thirty. Wealthy, powerful, and—according to her parents—imminently eligible.

“He’s trying to gain entrée into polite society,” Mama had said when she and Papa first broached the subject of an alliance. “It’s why he wants to court you, my dear.”

“And he’ll never flaunt his common origins in your face,” Papa had added. “He’s too ashamed of them. Now he’s made his fortune, he wishes to forget his humble beginnings. And if he can forget them, Sophia, then so can you.”

Sophie didn’t care about Mr. Sharpe’s humble beginnings. Quite the opposite. She’d often wished he would speak of them. She’d been curious about him and desired to know him better. But after two months…

She sighed. “I haven’t told my parents yet. I know they’ll be dreadfully disappointed. They like you very much.”

She shot him a narrow glance. His face was set in lines as immoveable as granite, his broad shoulders taut beneath the expensive fabric of his topcoat. “You needn’t be unpleasant about it. They were no more mercenary than you.”

“Mercenary,” he repeated. “Is that what I’ve been?”

“It’s nothing to be ashamed of. It’s how these things are done. It’s how they’ve always been done. Alliances contrived between wealthy merchant’s daughters and impoverished nobleman. Or—as in our situation—successful men of business and the daughters of impoverished country gentry.” A troubled frown clouded her brow. “I’m sorry it’s all come to nothing for you.”

“Yes, but…honestly, Mr. Sharpe, if you wish to gain admittance into society, you would do better to look higher than the Appersetts of Derbyshire. Find yourself an earl’s daughter. A lady who is accustomed to moving about in society. As for myself, I—”

“Is there someone else?” he asked abruptly.

Sophie’s gaze jerked to his. “What?”

“Is there another man? Someone you prefer?”

“Goodness no. If there were, I’d never have agreed to walk out with you.” She slowed her pace. They’d ventured too far from the entrance to the park. And she couldn’t stay much longer. She had to get back before her absence was remarked. “It’s only that we have nothing at all in common. After two months, surely you must see that.”

He made no reply.

Sophie worried her lower lip between her teeth. How much more was she required to say in order to put an end to their relationship? She had no experience with this sort of thing. No man had ever asked leave to court her before. And, she thought grimly, it was very possible that no man ever would again. “Perhaps I should have said something sooner.”

She looked out across the choppy waters of the Serpentine. “I don’t know. I suppose I thought…” That he would warm to her. That he would come to care for her. Even to love her a little. She’d been ready to love him. It would have taken so little encouragement. A fond glance. A kind word. An affectionate touch. “But it doesn’t matter now, does it? We’ve come to the natural end of things.”

“As you say.” Mr. Sharpe withdrew his gold pocket watch from his waistcoat to look at the time. It was a singularly dismissive gesture.

Sophie stopped. The chill breeze rustled her heavy woolen skirts around her legs. “Am I keeping you from an appointment, sir?”

He stopped as well, turning to face her. His expression remained unreadable, but she detected a slight hardening along the firm line of his jaw. As if he were irritated—or even angry. “You are, Miss Appersett.”

An embarrassed flush crept into her cheeks. Here she was attempting to sever their relationship in the most delicate manner possible, and all he could think about was his next meeting! He didn’t even care. The past two months had been as nothing to him. It was what she’d always suspected, but still…

It hurt. She had so wanted him to like her.

She clenched her fingers within the confines of her muff. “I will not detain you. If all is settled between us—”

“Perfectly. There’s no reason to continue this charade.”

Sophie inwardly winced. A charade? Is that what he thought of their courtship? How utterly lowering. “No reason at all.” She withdrew her hand from her muff and extended it to him. “I wish you well, Mr. Sharpe.”

Mr. Sharpe’s gaze dropped to her outstretched hand. It was encased in a red kid glove, slightly worn at the thumb. After a moment of hesitation, his much larger hand engulfed hers, clasping it just a heartbeat longer than was strictly necessary. “And I you, Miss Appersett,” he said.

And then he let her go.

« Return to A Holiday By Gaslight