The Power of Functional Pockets 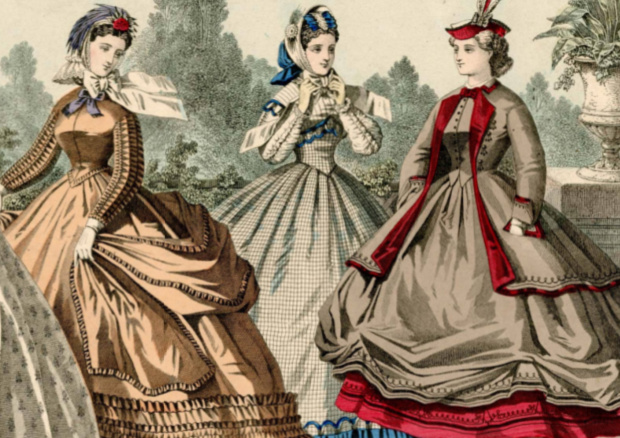 In the mid- to late nineteenth century, functional pockets in women’s clothing were a powerful symbol of women’s burgeoning independence. Unlike their early nineteenth century forebears, whose close-fitting vertical fashions hid few secrets, the full skirts of ladies living in the 1840s provided plenty of room for a pocket or two. These pockets weren’t always fully functional, and many weren’t terribly easy to access, but their presence foreshadowed greater changes to come, not only in terms of fashion, but in terms of female freedom.

Fashion historian C. Willett Cunnington reports that, by 1843, “pockets concealed in the folds of the skirt” had become usual. 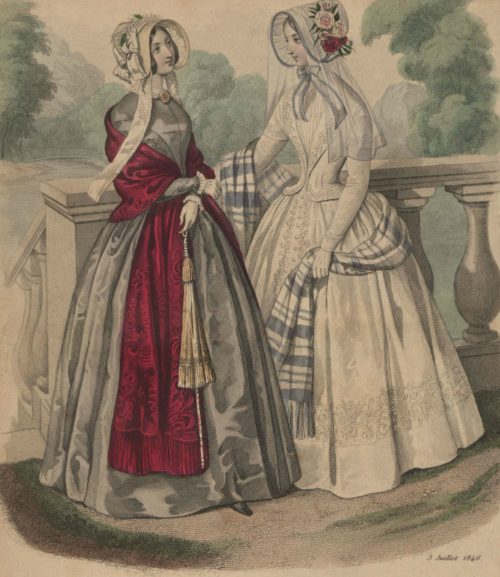 This trend continued into the 1850s and 1860s, with pockets generally set into one or both of the side seams of the skirts of ladies’ day dresses. Many day dresses were also made with a small watch pocket at the waist. As Mary Ellen Snodgrass states in her book World Clothing and Fashion:

“By the 1860s, British and American women gradually accepted pockets in the side seams of day dresses, small watch pockets in skirts, and ticket pockets in the inner sleeves of mantles.”

The importance of these pockets can’t be overstated. Without them, women had no place on their person to carry the necessities of daily life. In order to keep a handkerchief, money, a sewing kit, railway tickets, or anything else they required, they were obliged to carry a small purse known as a reticule. Either that or left to rely on a gentleman to manage their things.

A small pocket in the skirts was enormous progress from the dependence of the past, but it was still far from ideal in terms of size and accessibility. Fortunately, as the 1860s approached and skirts reached their largest circumference of the century, pockets grew larger, too. This made them much more useful and practical. 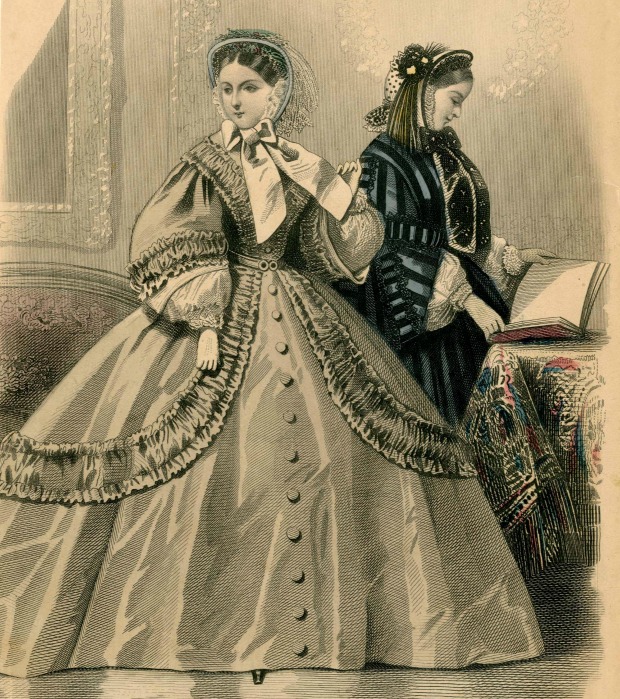 But function, as so often happens, was soon sacrificed to the vagaries of fashion. The voluminous skirts of the 1860s gave way to the close-fitting gowns of the 1870s and 1880s. With the skirts drawn tight across the front and arranged either in folds or pleats at the back or draped over a bustle, there was little room left for functional internal pockets. Instead, many gowns during these years were equipped with ornate external pockets. Placed near the back of the skirts, these pockets—though far out of reach for the wearer—were easily accessible to pickpockets, once again rendering a woman vulnerable. Cunnington explains:

“The outside pocket is now de rigeur both with polonaise and Princess dress, both being too tight to admit of an inside pocket and the polonaise too long to be raised as it used to be at the beginning of the fashion,’ a mode proving a boon to the pickpocket.” 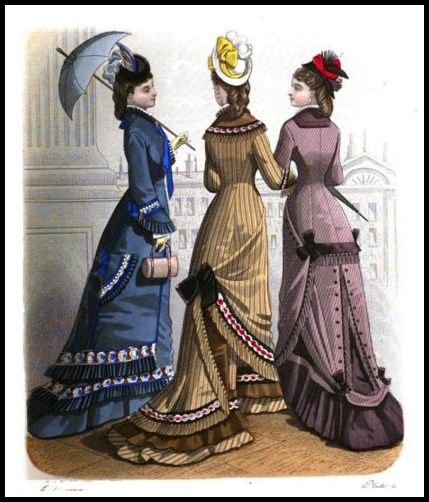 As the years rolled on, women became much more active, both in athletic endeavors and in daily life. It made the limitations of their clothing that much more frustrating. An article in an 1890 edition of American Stationer expresses that frustration in terms of the lack of pockets, stating:

“In respect to pockets women are an acknowledged failure. A man demands and gets pockets in all sorts of handy places—half a dozen in his overcoat, ditto in his coat, ditto in his vest, several more in his trousers… Women, with their voluminous skirts offering places for at least half a dozen good sized pockets, consider themselves in luck if their dressmakers allow them to have one, and that will usually be so completely entangled among pleats, draperies, dress extenders and things, that it is less trouble to do without it than to hunt it up.”

This inequality couldn’t be allowed to stand. It wasn’t only a matter of fashion or feminine politics; it was a matter of basic safety. As Kat Jungnickel explains in Bikes and Bloomers:

“Pockets became critical in the context of active lifestyles in the late nineteenth century and with the introduction of new mobility technologies, such as bicycles. Women were starting to move more and their hands were required to manage machinery.”

With that in mind, pockets became an occasional selling point. For example, describing the latest fashions, an 1891 issue of Good Housekeeping claims that:

“The pockets in the new dress skirts are as serviceable as those in a man’s coat and as eminently practical.”

A hollow boast, considering women’s continued dissatisfaction with the number and quality of pockets sewn into their clothing. This frustration is well expressed in an 1896 publication from the General Federation of Women’s Clubs. Calling fashion “a tyrannous goddess,” the writer laments that:

“All our intelligence and advanced thinking has not diminished the size of one sleeve or provided one accessible pocket.”

That didn’t stop ladies from yearning for functional pockets. Nor did it stop them from making the valid connection between pockets and their own independence. An 1898 issue of Good Health sums up the issue admirably, not only for the nineteenth century, but for all time:

“Plenty of pockets is an absolute necessity… One pocket in the skirt, if it is put where one is not obliged to sit on it, and four or five in the coat, give a woman a feeling of relief and independence in delightful contrast with the helplessness induced by the knowledge that she has no natural place to put her handkerchief, her purse, her watch, her knife, or any other accompaniment of a busy woman’s outfit.”

Want to read more about pockets in nineteenth century women’s fashion? Try my critically-acclaimed Victorian romance The Siren of Sussex! New from Berkley/Penguin Random House, it features (among other things) a talented tailor who fully appreciates the importance of functional pockets in the skirts of day dresses, riding habits, and even ball gowns. Scroll down for more info! 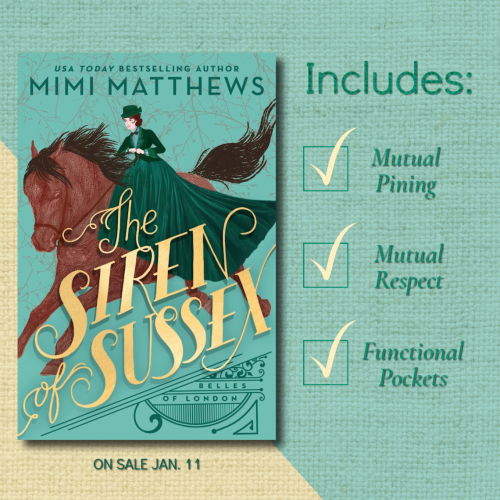