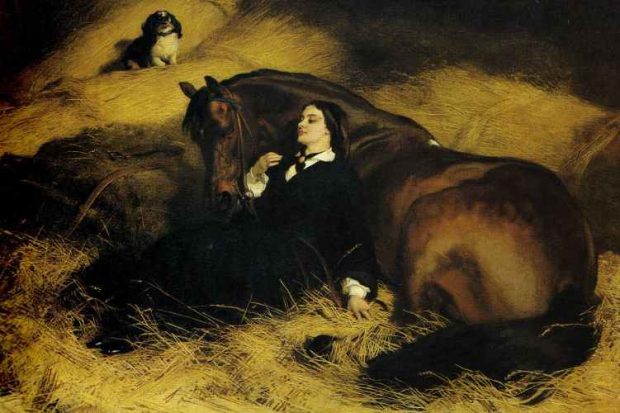 The Shrew Tamed (aka The Pretty Horsebreaker) by Edwin Henry Landseer, 1863

In the course of the London season, during the fashionable hour (from five to seven each evening), the crème of Victorian society could often be seen riding or driving in Hyde Park’s Rotten Row. Titled noblemen and women, wealthy heirs and heiresses, and ladies and gentlemen in town to make a match. But it wasn’t the well-bred young ladies on the marriage mart who drew a crowd. It was a group of fashionably-clad and impeccably-mounted courtesans known as “the Pretty Horsebreakers.” 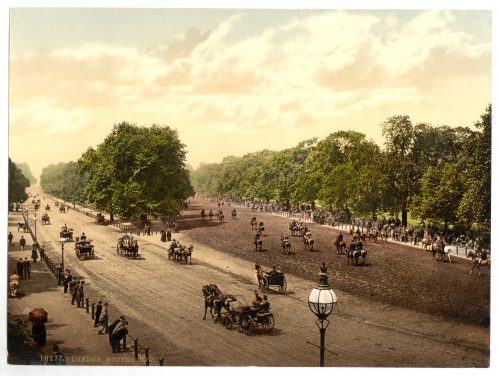 The Pretty Horsebreakers were as skilled in the equestrian arts as they were in the art of seduction. When they appeared in Rotten Row, either alone or in company with others of their kind, they commanded society’s attention—especially that of eligible men. Among the Pretty Horsebreakers, perhaps the best known was Catherine Walters. Newspapers of the day referred to her as “Anonyma” or “Incognita,” but to most of London she was simply known as “Skittles”—a reference to the bowling alley where she worked in her youth. 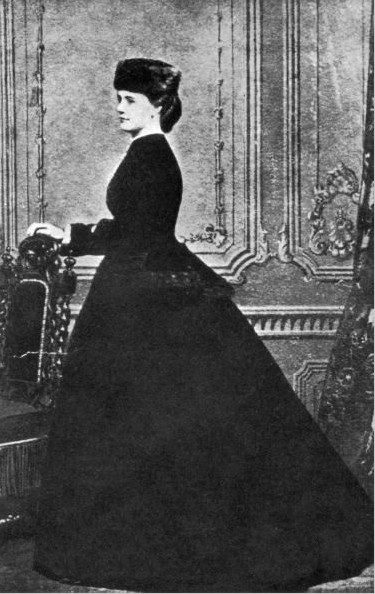 When on horseback, wearing one of her perfectly-cut riding habits, Miss Walters drew every eye. So renowned was her beauty and her horsemanship, she even inspired famed artist Edwin Henry Landseer. His famous painting The Shrew Tamed; or The Pretty Horsebreaker has long been rumored to be of Miss Walters herself. 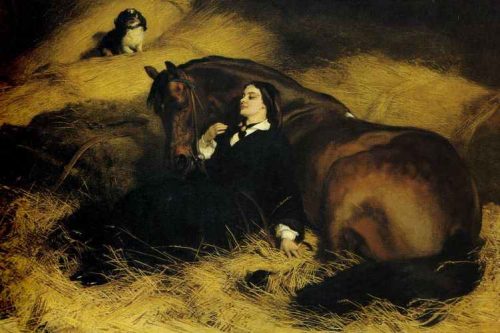 The Shrew Tamed (aka The Pretty Horsebreaker) by Edwin Henry Landseer, 1863

Miss Walters’s myriad charms made her irresistible to young men, even if they could only admire her from afar. The other Pretty Horsebreakers were similarly dazzling, ensnaring the imaginations of those who watched them riding in Rotten Row. Society Mamas lamented that their own daughters had been supplanted in the hearts of marriageable men. Even newspaper articles decried the fact. A satirical 1861 letter in The Times titled “A Belgravian Lament,” and purported to have been written by “seven Belgravian mothers,” comments on the trend in humorous fashion:

“With all pain, and some shame, we declare it, — an openly recognized anti-matrimonial element pervades good society. The just privileges of our daughters are set aside; the ‘heirs’ dance with them, flirt with them, dine with us, shoot our game, drink our claret, but they will not marry. And why? Because what our simple-minded daughters call the ‘pretty horsebreakers’ occupy naughtily and temporarily where we should occupy en permanence.

“Go where we will, the mother’s eye has this social cruel pest intruded upon it; these bad rivals of our children are no longer kept in the background . . . Time was, Sir, when Lawrence, and then Grant, placed on the walls of the Royal Exhibition lovely pictures each season of daughters now first offered to the attention of England’s fashionable world, — pretty advertisements of our pretty, chaste wares. That day seems for ever gone. The picture of the year is ‘Pretty Horsebreaker’ — but too well known—by Sir E. Seaview, R.A.”

How were marriage-minded young ladies to compete with such beauty, such skill, such dynamism? By copying the Pretty Horsebreakers’ style, of course. In efforts to make themselves noticeable to single men, young ladies of the day were often known to “ape” not only the dress and horsemanship of the courtesans but also to mimic their cant phrases and speech.

“Who rides the best horse in the row? Who drives the most rampageous ponies? Whom do all the best girls ape in dress and deportment, and in equipage if they can; aye, and in talk, too? . . . Why, one of our ‘pretty horsebreakers.’” —The Times (London), 1861.

In my new novel The Siren of Sussex, heroine Evelyn Maltravers concocts just such a plan—endeavoring to copy the Pretty Horsebreakers’ style in order to attract the attention of an eligible gentleman. A skilled equestrian herself, all Evelyn requires is a dashing riding habit. She approaches Ahmad Malik, Miss Walters’s personal habit-maker in Conduit Street. Ahmad is a talented tailor and up-and-coming dressmaker who, like Evelyn, is looking to make his mark. Together, the two of them might just make a little history of their own.

The Siren of Sussex is steeped in Victorian history, featuring the Pretty Horsebreakers and other real-life characters from the 1860s. Click through to read an excerpt from the first chapter. And don’t forget to order your copy in ebook, paperback, or audiobook via the links below!

Half-Indian tailor Ahmad Malik has always had a talent for making women beautiful, inching his way toward recognition by designing riding habits for Rotten Row’s infamous Pretty Horsebreakers—but no one compares to Evelyn. Her unbridled spirit enchants him, awakening a depth of feeling he never thought possible.

But pushing boundaries comes at a cost and not everyone is pleased to welcome Evelyn and Ahmad into fashionable society. With obstacles spanning between them, the indomitable pair must decide which hurdles they can jump and what matters most: making their mark or following their hearts?

Praise for The Siren of Sussex

“Readers will delight in this paean to women’s fashion and horseback riding.” —Publishers Weekly, starred review

“Matthews brings the Victorian era to vivid life with meticulously researched details and an impossible romance made believable and memorable.” —Booklist, starred review

“Romance aficionados who love fashion and animals will delight in this tender romance and will be excited to see Evelyn’s friends in future installments.” —Library Journal, starred review