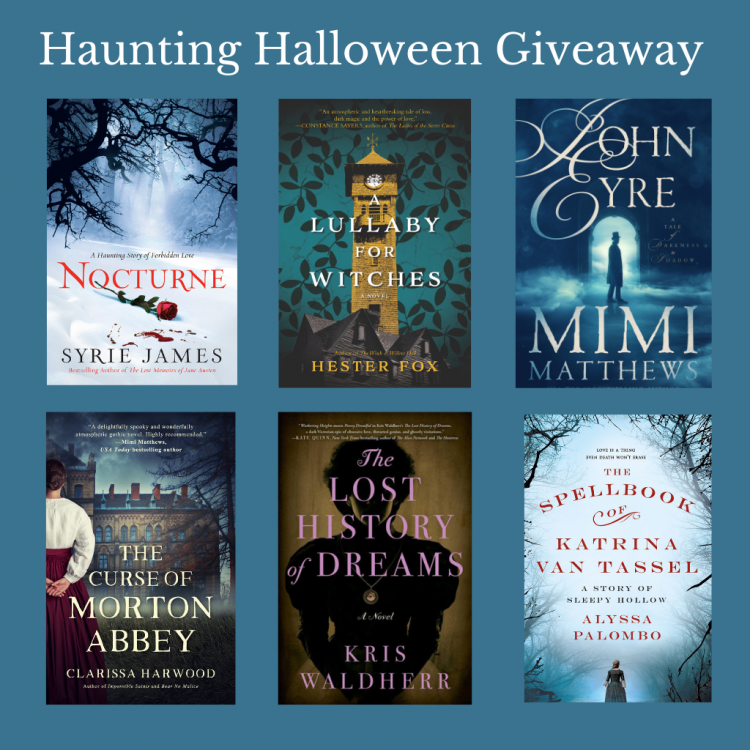 ‘Tis the season for things that go bump in the night! The lucky winner of this Haunting Halloween Giveaway will receive all six of the novels pictured here in paperback format.

Warning: You may stay up all night reading these thrilling and addictive novels!

The Lost History of Dreams is a “sensual, twisting gothic tale…in the tradition of A.S. Byatt’s Possession, Diane Setterfield’s The Thirteenth Tale, and Emily Bronte’s Wuthering Heights” (BookPage). In this reworking of the myth of Orpheus and Eurydice, a post-mortem photographer unearths the dark secrets of a famed poet’s marriage. (Psst! The ebook is currently on sale for $1.99 thru Halloween!)

The Spellbook of Katrina van Tassel. In this feminist retelling of The Legend of Sleepy Hollow, Katrina Van Tassel is instantly drawn to Ichabod Crane when he arrives in the village as the new schoolmaster. They embark on a secret love affair, sneaking into the woods after dark together, praying they don’t catch sight of Sleepy Hollow’s legendary Headless Horseman. Until All Hallow’s Eve, when Ichabod suddenly disappears…

The Curse of Morton Abbey. A young woman solicitor accepts a suspiciously lucrative offer of employment to prepare the sale of a crumbling Yorkshire estate, but when she arrives, the mysterious occupants of the house seem to be trying to drive her away. As she is drawn deeper into the dark secrets of the family, she can’t be certain she’ll escape Morton Abbey with her sanity—or even her life—intact.

John Eyre is a gender-reversed retelling of Jane Eyre (and one other Victorian classic that can’t be revealed without spoiling the story) in which a former schoolmaster encounters mysterious happenings at Thornfield Hall, alternating with Bertha Mason’s earlier travels where she falls under the spell of the increasingly dangerous Mr. Rochester.

A Lullaby For Witches. Two women. A history of witchcraft. And a deep-rooted female power that sings across the centuries. “A Lullaby for Witches weaves a spell of darkness that’s mysterious and magical, and binds it with a knot of deathless love.” —New York Times and USA Today bestselling author Susanna Kearsley

Nocturne is a haunting, deeply romantic tale of forbidden love about a woman who’s snowbound for days with a mysterious stranger. As the sexual tension builds, she discovers that her host is hiding a terrifying secret that threatens her very life. “The kind of book that makes you want to turn off the phone and the television so you can do nothing but read.” —Barnes and Noble Romantic Read of the Week

AND NOW FOR THE GIVEAWAY

Grand Prize: Print copies of all six of the novels pictured and described above.

The Winner Is April K.
Congratulations! We’ll be reaching out to you privately to arrange shipment of your prize.

Previous Post
The Artistry of the Victorian Eyebrow
Read More
Next Post
The Siren of Sussex Audiobook News!
Read More