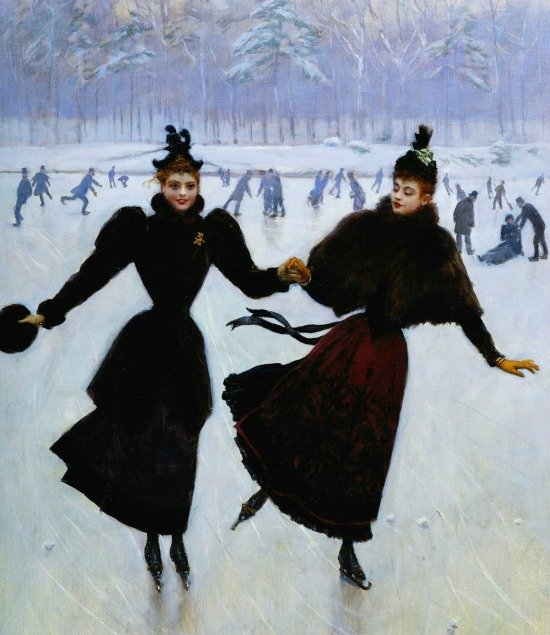 For most mid-nineteenth century ladies, fashionable outdoor sport consisted of little more than horseback riding, or a spirited game of croquet. But with the winter came yet another option for outdoor activity. In her 1877 book The Ladies’ and Gentlemen’s Etiquette, Eliza Duffey states that ice skating “is to winter what croquet is to summer.”

For most mid-nineteenth century ladies, fashionable outdoor sport consisted of little more than horseback riding, or a spirited game of croquet. But with the winter came yet another option for outdoor activity. In her 1877 book The Ladies’ and Gentlemen’s Etiquette, Eliza Duffey states that ice skating “is to winter what croquet is to summer.”

“Skating became quite the rage in Paris in 1860 under the lead of the Emperor and Empress, both of whom excelled in the exercise.”

Skating costumes were fairly similar to those worn for croquet. According to Duffey, both called for “a greater brilliancy in coloring than any other out-of-door costume,” and both were short enough to display “a handsomely fitting but stout boot.”

Like croquet costumes, skating costumes were also quite simple in form. As the 1889 edition of the Ladies’ Home Journal explains:

“First of all, a skating costume needs to be short, and next it should be simple. These requirements reached it may be as pretty as is desired.”

This prettiness was generally manifested in the luxurious fabrics used to create ladies’ skating ensembles. Fashion magazines and journals of the day describe bright-colored woolens, and rich velvets trimmed in furs. According to author John Ruth in his 1878 book Decorum:

“Velvet trimmed with fur, with turban hat of the same, and gloves and boots also fur bordered, combine to make the most elegant skating costume imaginable. But any of the soft, warm, bright-colored woolen fabrics are quite suitable, if not so rich.”

Fur-trimmed velvets remained popular throughout the remainder of the century. In her 1893 book Rules of Etiquette & Home Culture, Mrs. Walter Houghton states:

“An elegant skating costume may be made of velvet, trimmed with fur, with fur bordered gloves and boots. Any of the warm, bright colored wool fabrics, however, are suitable for the dress. If blue or green are worn, they should be relieved with trimmings of dark furs.”

As far as cut, the 1891 edition of The Illustrated American explains that a good skating costume should consist of “a short skirt with fur border, close-fitting, warmly lined jacket of the same material and shade as the skirt, and bordered to match.” The hat and muff of the costume were expected to correspond, with both made “either entirely of fur, or else of the cloth or velvet composing the dress, with a fur border of the same.” 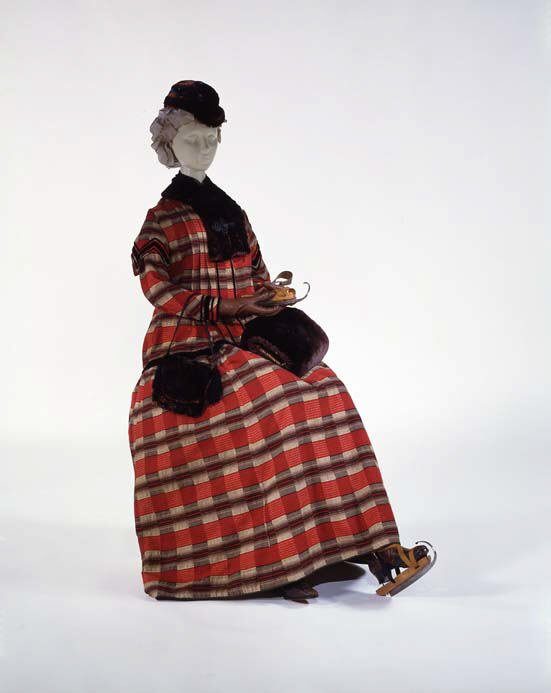 A fur-trimmed skating costume could be extraordinarily expensive. An 1886 issue of Demorests’ Monthly Magazine describes an “especially rich and beautiful” costume made of dark blue velvet trimmed in Russian sable, adding:

“I am almost afraid to say how costly this suit was, but I am assured that the fur alone, exceedingly choice in quality and color, is worth over five thousand dollars.”

For ladies without thousands of dollars to spare, a walking dress could also serve as a skating costume in a pinch. However, ladies were warned to avoid dresses made of silk, a fabric which wasn’t suitable for wear on the ice. Novice skaters were also advised to steer clear of costumes trimmed in white fur. As Duffey explains:

“White furs should only be worn by experienced skaters, for they easily become soiled by the novitiate in tumbles upon the ice.” 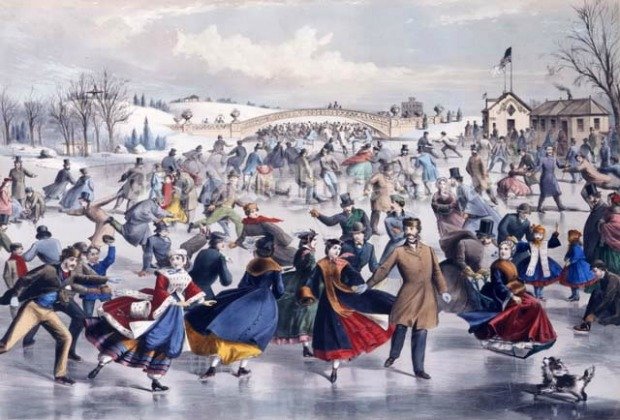 Ice skating could be enormous fun for nineteenth century ladies. And, of course, they needn’t pay any attention to the fashion advice of the day. But for a stylish lady, the cut and fabric of her skating ensemble was as important as that of any other fine gown—perhaps even more so, for as the Ladies’ Home Journal declares:

“Seldom does a girl appear so captivating, nor present such a fascinating picture, as when on the ice.”

Ruth, John A., Decorum: A Practical Treatise on Etiquette and Dress of the Best of American Society. New York: J. A. Ruth, 1878. 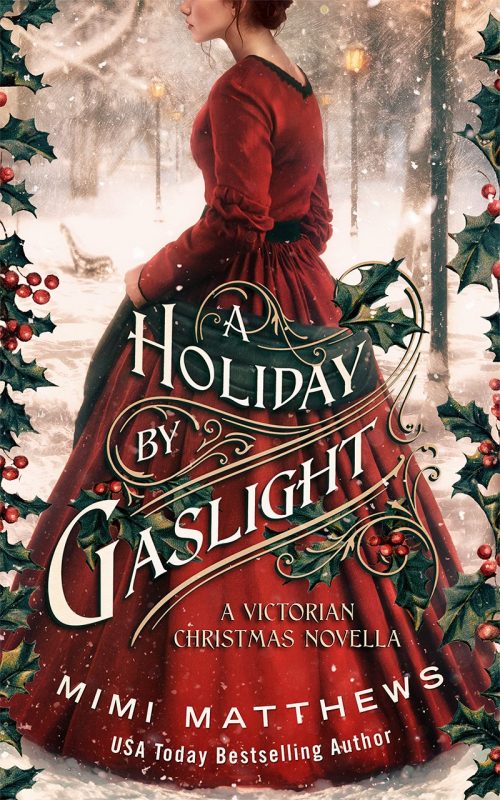 A Holiday By Gaslight
A Victorian Christmas Novella

Praise for A Holiday By Gaslight

“Matthews (The Matrimonial Advertisement) pays homage to Elizabeth Gaskell’s North and South with her admirable portrayal of the Victorian era’s historic advancements in addition to courtship struggles arising from societal castes…Readers will easily fall for Sophie and Ned in their gaslit surroundings.” –Library Journal, starred review

“A warm and captivating Christmas romance which showcases how people from two different worlds can find common ground and genuine love.” –The Romance Reviews, top pick

“A graceful love story…and an authentic presentation of the 1860s that reads with the simplicity and visual gusto of a period movie.” –Readers’ Favorite (2019 Gold Medal for Holiday Fiction)