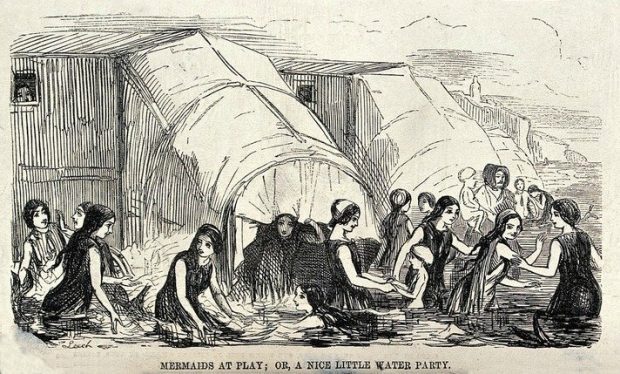 During the Victorian era, ladies visiting the public beach couldn’t simply wade out into the water and enjoy an invigorating swim. To protect their modesty, most ladies on a seaside holiday utilized a bathing machine. Though the name puts one in mind of a mechanized device, a bathing machine was really nothing more than a wooden dressing room set up on two wheels. The interior was usually equipped with both an entry and an exit door, and generally featured benches on either side, and hooks on the walls.

A bather would enter the machine fully clothed, at which point—while the occupant changed into her bathing costume—the machine was hitched to a horse and drawn out into the sea. The bather could then descend through the exit door directly down into the water. To further protect a lady’s privacy, most exit doors were equipped with a canvas awning or umbrella to shield the lady from view until she was submerged beneath the waves. 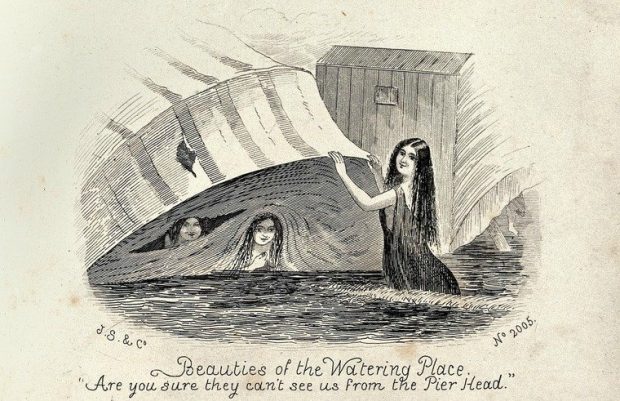 A woman holding up a canopy attached to a bathing machine. Wood engraving.
(Wellcome Images)

The process of changing clothes within a bathing machine was not without difficulty. Victorian cartoons abound of bathers being jostled about as their machine is hauled into the water. The 1865 publication All About Margate and Herne Bay describes the experience of a party of Victorian bathers on holiday:

“We, after a time, find ourselves in possession of a machine with a blue door and a very wet carpet inside, and feel ourselves insulted by having two towels handed to us which are no larger than sheets of blotting-paper. Just as we are about to remonstrate, the jolting box begins to move, and we are sent bumping about from side to side like a weaver’s shuttle. It is worse than riding in a hay-cart, and impresses us with the belief that we are being sifted like cinders.” 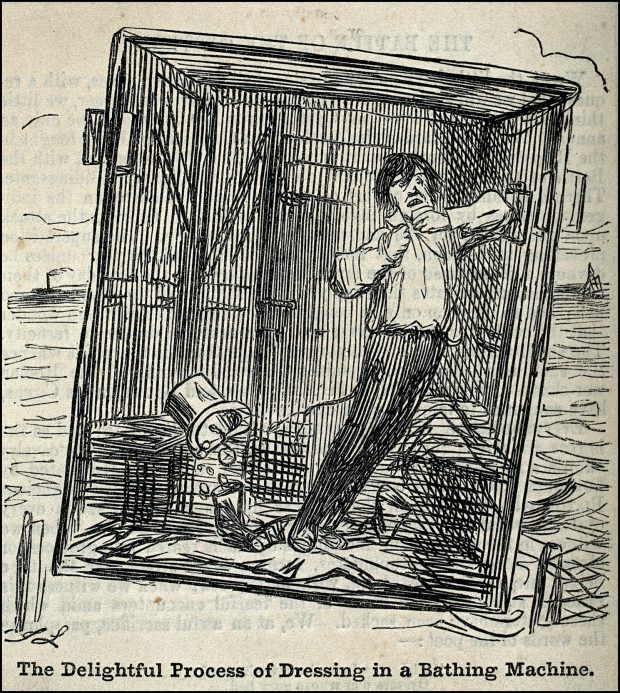 Bathing machines were also known to serve another purpose. During the holiday rush, when visitors to the seaside far outnumbered the available hotel rooms and houses to let, some enterprising bathing machine proprietors took to renting their machines out as rooms for single gentlemen. According to an 1868 edition of Punch:

“Tradition states that on more than one occasion, when the rush for rooms has been excessive, these amphibious vehicles have been let out as sleeping apartments.”

Victorian era bathing machines were available for both sexes. The men’s machines were generally situated on the opposite end of the beach from the women’s, sometimes as much as a quarter of a mile away. This was to prevent men and women from bathing together. Mixed bathing—also known as promiscuous bathing—was prohibited at most public beaches. 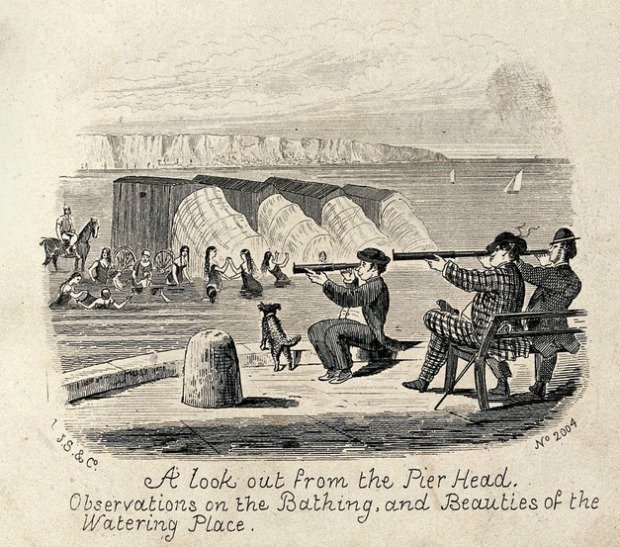 Though bathing machines may seem like an antiquated idea today, I feel they still hold some small appeal. How many of us who are shy or self-conscious in our swimsuits wouldn’t prefer such a manner of getting into the water? Then again, if we were wearing the requisite knee-length woolen tunic and Turkish trousers which made up a mid-Victorian bathing costume, I don’t suppose there would be much to be self-conscious about.

Author’s Note: I’ve had to research a great deal about the Victorian seaside for my USA Today bestselling Parish Orphans of Devon series, but never so much as I’ve done for A Convenient Fiction (Parish Orphans of Devon, Book 3). It should be out in late October. Get ready for bathing costumes, bathing machines, and a trip to Victorian Margate! Until then, if you’d like to learn more about Victorian bathing costumes and summer holidays at the beach, check out these articles from my archives:

A Practical Guide to the Watering and Sea Bathing Places on the Coasts of Kent, Sussex, and Hampshire, including The Isle of Wight, Etc., London: Cradock & Co., 1848.