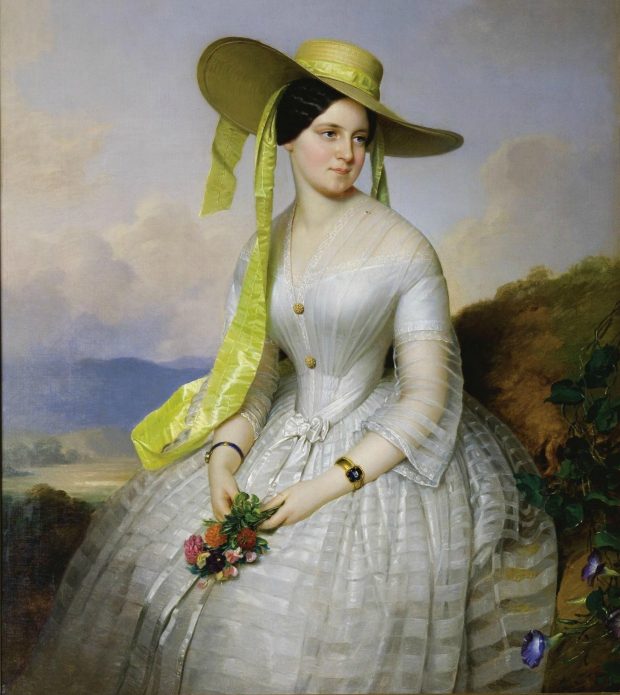 Victorian women didn’t have our knowledge of ultraviolet rays and SPF, but like us, they had a healthy respect for the damage that too much sun could wreak on their complexions. A fair, unblemished countenance was one of the hallmarks of a lady. It helped to distinguish her from the lower classes. To signal that she wasn’t obliged to engage in any outdoor labor.

To that end, Victorian ladies regularly employed parasols and bonnets to shield their faces from the sun. When that wasn’t enough to protect them from sunburn, freckling, and pigmentation, there were a wealth of topical treatments they might try—from the mildest creams to the harshest patent lotions. I’ve included a few of the gentler remedies below for informational purposes only.

One of the gentlest nineteenth century methods for fading freckles was strawberry water. Made from a distillation of strawberries, the 1841 Handbook of the Toilette refers to it as one of the “innocent remedies,” since even if it failed, it could do no harm. As an added bonus, it smelled divine. In his 1881 book Old Doctor Carlin’s Recipes, Dr. William Carlin recommends a liquid distilled from wood strawberries, stating that “the water is very fragrant.”

In her 1854 publication The New Household Receipt-Book, Sarah Josepha Hale provides an equally scrumptious-sounding recipe for fading freckles, consisting of fresh cream, lemon juice, “half a glass of brandy,” and “loaf sugar.”

To gently remove a tan, Dr. Carlin recommended that ladies employ a solution made from elderflowers and boiling water. After the flowers had steeped for 24 hours, the liquid was strained through a muslin cloth and bottled. Dr. Carlin then advised that ladies “wash the face every morning with the decoction.”

Another method for removing a tan was to bathe the face daily in “lemon-juice mixed with glycerine.” Lemon juice was a frequent component of tan-fading remedies. In her 1858 book The Arts of Beauty; Or, Secrets of a Lady’s Toilet with Hints to Gentlemen on the Art of Fascinating, Lola Montez offers her own, more elegant version:

If all else failed, a lady could always try a harsher solution, such as one Dr. Carlin describes, made from shaved soap, salts of tartar, borax, and “1 oz. liquid ammonia.”

There were a variety of topical treatments available for soothing a sunburn—and for preventing a sunburn, too. Mrs. Hale recommended a recipe for a preventative wash, to be applied before going out into the sun. It consisted of borax, camphor, alum, and “half an ounce of sugar-candy” and could take as long as two weeks to make.

For the sunburn itself, an 1848 edition of the London Journal recommends a lotion made from green grapes. The rather involved recipe reads as follows:

“Dip a bunch of green grapes in a basin of water; sprinkle it with powdered alum and salt mixed together; wrap it in paper, and bake it under hot ashes; then express the remaining juice, and wash the face with the liquor.”

A lady could also try bathing her sunburn in cucumber water mixed with gin. An 1894 edition of the Bazaar, Exchange and Mart, and Journal of the Household offers the following recipe:

“Peel and cut up a ripe cucumber, and cover the pieces with cold water. Simmer it very slowly until it comes to the boil. Leave until cold, then strain, and bottle, adding 1oz. of pure spirit or 2oz. of gin to each ½ pint of the liquid.”

If you’re going out into the sun this summer, I wouldn’t advise relying on any of the Victorian era recipes above. A good SPF, frequently reapplied, is better than all of the lemon cream, grape lotion, and strawberry water in the world.

The Bazaar, Exchange and Mart, and Journal of The Household, Vol., L. London: Upcott Gill, 1894.

Montez, Lola.  The Arts of Beauty; Or, Secrets of a Lady’s Toilet with Hints to Gentlemen on the Art of Fascinating.  New York: Dick & Fitzgerald, 1858.