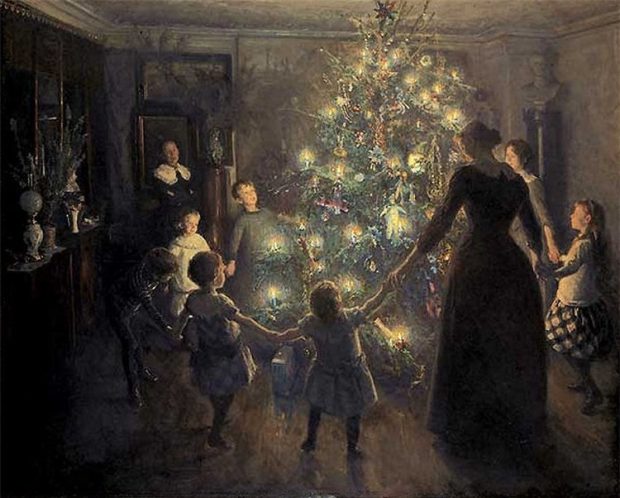 There’s nothing more quintessentially Christmas than a Victorian Christmas, complete with mistletoe, tinsel, and candles on the tree. But there was more to Victorian holiday decorating than tinsel and candles. Just like us, many Victorians had a fondness for glitter and gold.

In my new Victorian Christmas romance A Holiday By Gaslight, there’s a scene in which the guests at a country house party decorate for Christmas by gilding acorns and artificially frosting the tips of holly and ivy leaves with crystals. These Victorian decorating ideas didn’t originate in my fevered authorial brain. They were actual methods used to create glittering, gold-flaked, holiday cheer.

An issue of the Delineator from 1900 declares that “one of the handsomest effects” for the Christmas tree was “having the tips of the green boughs glittering with crystals and reflecting the lights in many brilliant colors.” It goes on to state that:

“One would suppose, at first sight of the glittering display, that some expensive method was necessary to produce the effect, but the process of covering the green twigs with crystals is very cheap and simple.”

At this juncture, I feel it necessary to warn you that you should definitely NOT try this at home. Many recipes the Victorians employed for decorating were highly toxic and not at all safe for use. The information provided below is purely for your historical edification. 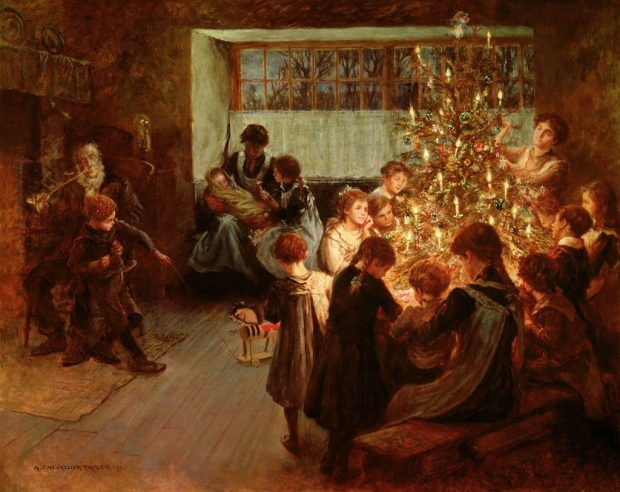 To produce the effect of glittering crystals on Christmas tree branches, the Delineator recommends the application of a solution of alum and boiled water. The recipes reads as follows:

“Put into a bucket a pound or more of alum and pour a gallon of boiling water upon it. Place the tree in such a position that the tips of the boughs may remain in this solution for some hours— perhaps overnight. Repeat the process until as many boughs are tipped with crystals as will make the tree very beautiful; or, if preferred, cut off the twigs, crystallize them and fix them again on the boughs.”

This method of frosting could also be used to create crystals on the leaves of holly and ivy. The 1881 edition of Arthur’s Illustrated Home Magazine describes one method for doing so, writing:

“On one pound of alum, pour a quart of boiling water. Whilst still warm, suspend the leaves in it by a string tied round the stalks; leave them in for twenty-four hours and then hang them up till dry.”

Arthur’s also offers a few more methods for creating snow-like crystals on Christmas tree branches. One was by coating the surface of the branches and leaves with gum solution and then “sprinkling thickly with flour.” Another, used to create an effect that resembled hoar frost, was to drape white cotton wool over the branches and then:

“Drop gum upon the wool, wherever frost would naturally form, and sprinkle coarse Epsom salts over it.”

As an alternative to Epsom salts, a Victorian could purchase “frosted glass, ready crushed.” Or, for an even cheaper solution, Arthur’s advises its readers to:

“…crush with a garden roller, any pieces of glass, such as old bottles, which have been saved up during the summer for this purpose.” 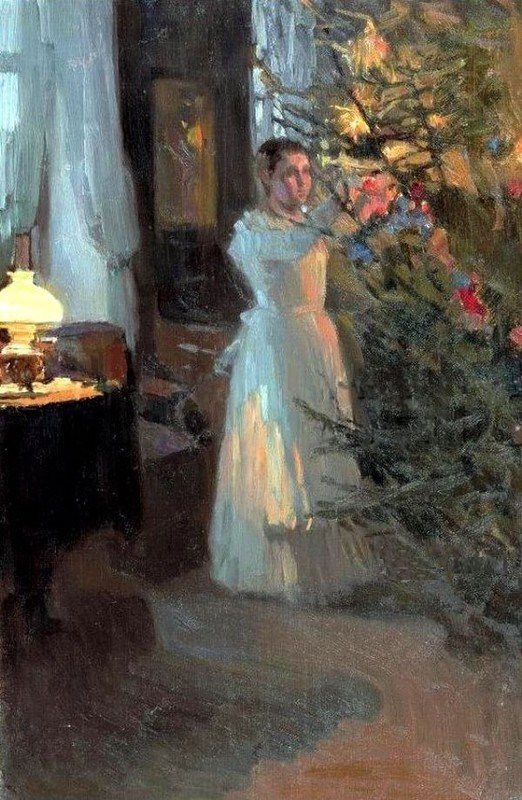 Along with frosted branches, gilded acorns and walnuts were also very popular Victorian Christmas decorations. Golden fruits were very much in style as well. According to the Delineator:

“Golden fruit is popular on frost-tipped Christmas trees and reminds one of the orange-tree bearing the ripened fruit in an early frost or snow-storm.”

Gilding requires far less explanation than frosting. For this, Victorian simply used gold leaf. However, for something like Christmas decorations, there were less expensive methods for gilding fruits and nuts. The Delineator advises its readers to:

“Hammer a long tack into the end of the walnut by which to suspend it after gilding. Using a feather or soft brush, wash the nut with mucilage; then roll it in gold powder until it is well gilded; or, cover it with tin foil in imitation of gold leaf or paint it with gold paint.”