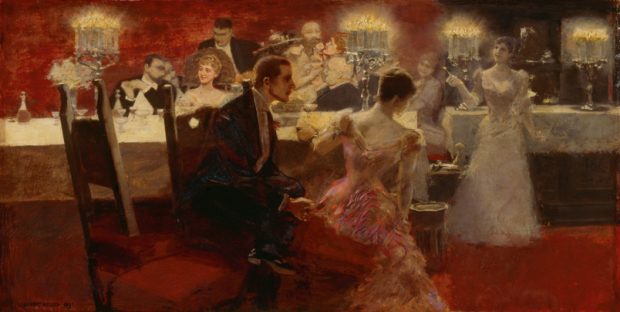 With the holiday season well under way, it seems an appropriate time to review a few of the many Victorian era rules for dining in company. The etiquette of the table hasn’t changed a great deal over the years. Some rules are merely a matter of basic common sense. Nevertheless, we could all do with a refresher now and then. To that end, I’ve gathered ten tips from various Victorian era etiquette books and articles addressing the basics of dining etiquette. I present them to you below.

“At the time of taking refreshment, of course, they must be taken off. No well-educated person would eat in gloves.”

2) Don’t Eat Too Much or Too Little

“Be careful to avoid the extremes of gluttony or over daintiness at table. To eat enormously is disgusting; but if you eat too sparingly, your host may think that you despise his fare.”

The Gentlemen’s Book of Etiquette and Manual of Politeness, 1874.

“It is decidedly vulgar to make a noise, either in taking the food into the mouth, in its mastication, or in swallowing.”

4) Don’t Chew with Your Mouth Open

“Do not fill your mouth so full that you cannot answer if you are addressed; nor open your mouth so wide during the process of chewing that your opposite neighbor may see the semi-chewed viands, which, if she be a delicate lady, might destroy her appetite altogether.”

“Avoid also, that most vulgar habit which prevails among half-bred country people, of abstaining from taking the last piece on a dish. It amounts almost to an insult toward your host, to do any thing which shows that you fear that the vacancy cannot be supplied and that there is likely to be a scarcity.”

6) Don’t Blow Your Nose at the Table

“If the handkerchief must be used, let it be very quietly; in case that is not possible, leave the table for a moment, which may be done in case of a sharp attack of coughing, sneezing, or the like, without asking permission, the cause being manifest.”

“It is a mark of rudeness to pick your teeth at the table, and it should always be avoided. To hold your hand or napkin over your mouth does not avoid the rudeness of the act.”

“For one or two persons to monopolize a conversation which ought to be general is exceedingly rude.”

“No argumentative or in any way unpleasant topic should be broached at the table.”

10) Refrain from Reading at the Table

“Letters, newspapers or books should never be brought to the table; though a very important message may be received and attended to, permission being asked of the hostess.”

There are countless others rules for Victorian dining, including those on what to serve, what to wear, and how to use one’s knives and forks. At some point in future, I’ll go into those in more depth. Until then, I hope the above rules—most of which are still applicable today—have given you a small taste of how Victorian ladies and gentlemen comported themselves at table.

Etiquette for Gentlemen; or Short Rules and Reflections for Conduct in Society. Philadelphia: Lindsay & Blakiston, 1847.

Etiquette for Ladies: A Manual of the Most Approved Rules of Conduct in Polished Society for Married and Unmarried Ladies. Philadelphia: J. & J. L. Gihon, 1843.

Young, John. Our Deportment: Or, the Manners, Conduct, and Dress of the Most Refined Society. Springfield: W. C. King & Co., 1882.