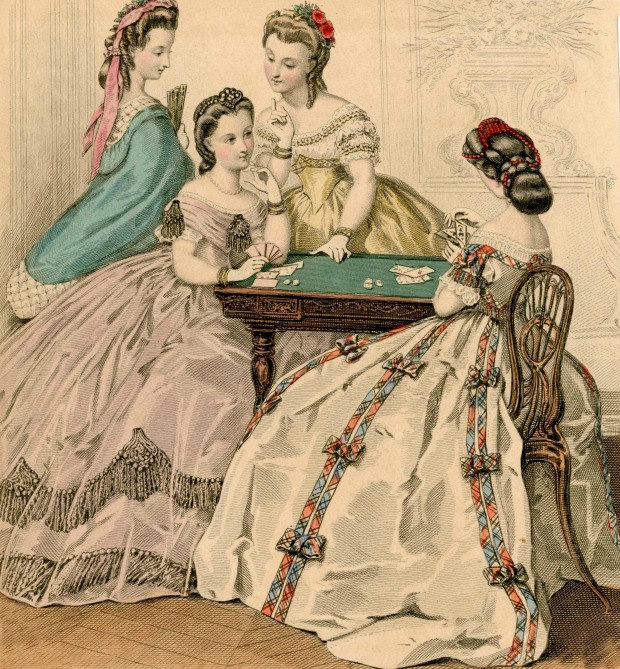 During the 1860s, ladies often wore their hair rolled back at the sides and at the nape of their neck. These rolls were usually created using false hair or “rats.” A rat was a homemade hairpiece made from the hair collected from a lady’s brush each evening. It was used to pad out the rolls and to help them keep their shape. Since it was made from a lady’s own hair, it provided the best match in color and texture.

Some rolled hairstyles of the 1860s were incredibly elaborate. According to the May 1863 edition of Godey’s Lady’s Book:

“Perfect scaffoldings of hair are now built on the head— roll upon roll — puff upon puff.” 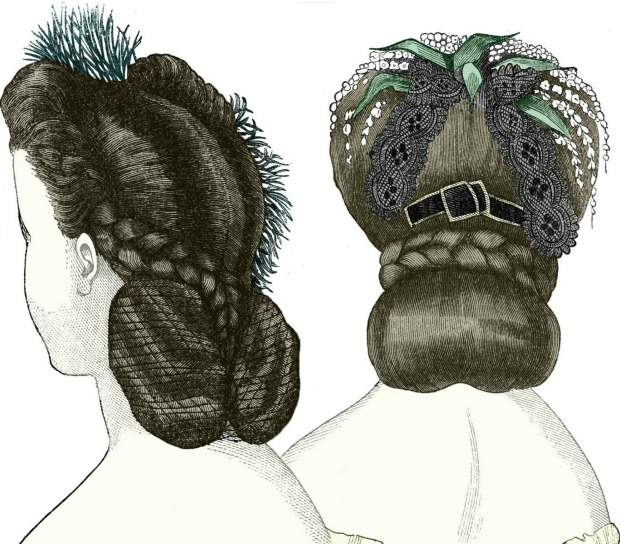 Such coiffures required more than a few rats to pad out their many rolls. Godey’s describes a style which used “two rats, two mice, a cat, and a cataract.” It sounds a little like fashion sarcasm, but in fact, rats, cats, mice, and cataracts were all names for pieces of hair used to pad out various places on one’s head. As Godey’s explains:

“The rats are the long frizetts of curled hair for the side rolls; the mice are the smaller ones above them; the cat is for the roll laid over the top of the head; and the cataract is for the chignon at the back of the head— which is sometimes called waterfall, cataract, and jet d’eau.”

In my newest Victorian romance A Holiday By Gaslight there is a scene in which the heroine uses rats to style her younger sister’s hair into a waterfall of rolls. The style described is based on an actual hairstyle from 1863 (pictured below), in which the hair was rolled at the sides, with three rolls stacked at the back. The whole was then ornamented with fresh flowers and greenery. 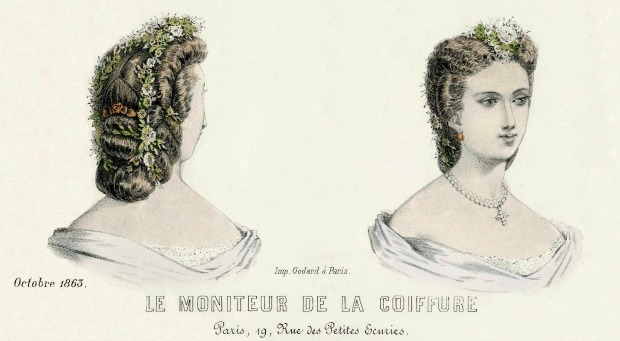 As an alternative to rats (and mice and cats), many ladies of the 1860s employed false hair or pads. These came in various shapes and sizes and, much like rats, could be rolled into a lady’s coiffure to add thickness and to help the roll hold its shape. False hair, pads, and rats were secured into the hair with hair pins. The whole coiffure could then be sprayed with liquid bandoline. Made of clear gum solution, liquid bandoline was the Victorian equivalent of hairspray.

*Author’s Note: A hairstyle known as “Cats, Rats, and Mice” is mentioned in Margaret Mitchell’s 1936 novel Gone With The Wind. I don’t have anything more about that specific style on my blog, but If you’d like to learn more about Victorian hairstyles in general, please see these articles from my archives: