In the Victorian era, Halloween parties were rife with games designed to help young ladies see into their marital futures. These games were generally played at co-ed Halloween celebrations. There were even some which could be played by gentlemen. The bulk of these games, however, were geared toward marriage-minded females. It is therefore not surprising to find descriptions of Halloween parties—or Halloween Teas—that were strictly for women.

The November 5, 1898 edition of the Western Mail describes a Halloween tea held by a young lady by the name of Anna Leighton. Miss Leighton is reported to have invited sixteen of her female friends to “an early candlelight tea.” The guests arrived to find the Leighton’s parlor decorated with autumn leaves, fruits, nuts, and ears of corn. There were jack-o-lanterns arrayed on the mantel and candles burning under crepe paper shades. As the article relates:

“The decorations of the dining-room were unusually pretty, the walls being draped in soft red and yellow, with wreaths and garlands of autumn flowers and leaves gracefully festooned on the wall, and from each corner were suspended Jack-o’-lanterns cut from immense pumpkins.”

Wax candles illuminated the table and, beside every place setting, there was a cluster of red and yellow roses tied with ribbons and accented with a “silver horsehoe stick-pin” that could be taken home as a souvenir. In addition, attached to each set of roses, was a hand-painted card which revealed the respective guest’s fortune. The Western Mail reports that one such card was drawn with four-leaf clovers and read:

“The man you’ll marry is full of pluck;
He has gone to Klondyke and had good luck.” 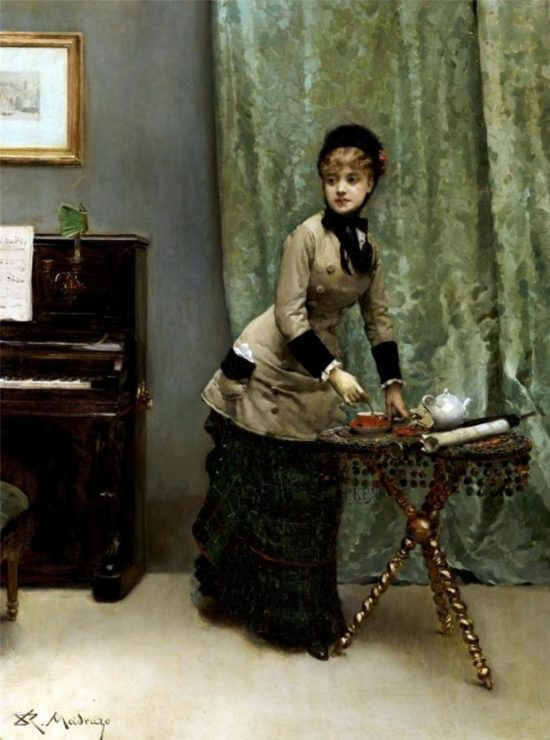 In keeping with the holiday theme, the menu for the Halloween tea consisted primarily of “nuts, fruit, and candy.” The guests were also served “fancy cakes” and ices which contained “either a needle, thimble, dime, or ring.” According to the Western Mail:

“The needle and thimble indicated that the ones who happened to take them would remain spinsters for another year; the dime and ring meant either an engagement or marriage.”

There were other chances for young ladies to divine their romantic futures, many of which revolved around cups of tea. For example, to find out how many years she might have to wait until she married, a young lady balanced a dry spoon on the edge of her teacup. A second spoon was filled with tea and “holding it above the balanced spoon,” she slowly dropped the tea into the first spoon until it overbalanced. Each drop represented a year.

Another tea-related marriage game was said to reveal how soon one’s lover might call. As the Western Mail explains:

“If a tea stalk floats in the cup it is called a lover, and when this is seen maids should stir their tea very rapidly round and round, and then hold the spoon upright in the centre of the cup. If the tea stalk is attached to the spoon and clings to it he will call shortly, and maybe, this very evening; if the tea stalk goes to the side of the cup he will not come, and you will not have a proposal this year.”

After an evening of tea drinking and marriage forecasting, the young ladies at Miss Leighton’s party gathered around a coal fire and roasted marshmallows. They then told ghost stories. The young lady who told the scariest story was awarded a prize consisting of a pair of toy slippers accompanied by a card which read:

“Before retiring to-night,
Place your slippers in the form of a T.
And to-night you, your love will see;
The colour of his hair and the suit he will wear
The night he is wedding to thee.” 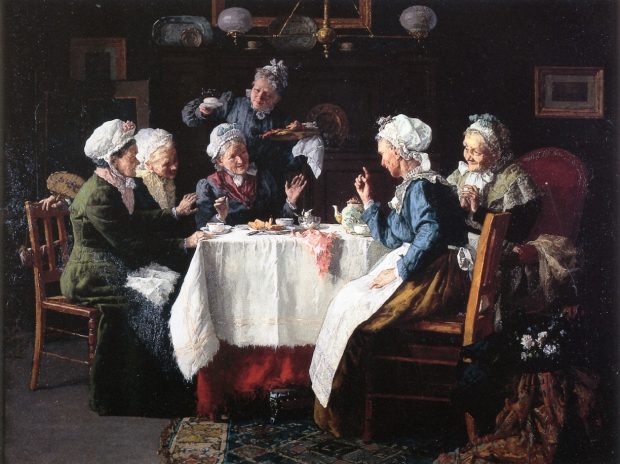 Though I’m not a fan of the endless games of marriage forecasting, I confess that the idea of a Halloween tea party for ladies does sound appealing. I hope some of you might consider reviving the tradition. Who knows? If we all take part, one day Gallowen might even become popular enough to rival Galentine’s Day.

*Author’s Note: If you’d like to learn more about Victorian Halloween parties or Victorian tea parties, please see these articles from my archives:

Beard, Linda. How to Amuse Yourself and Others. New York: Scribner & Sons, 1893.