In December of 1888, the Gloucester Citizen reported on the arrest of a Parisian dog thief. Mind you, this was not a human who dognapped canines. It was, in fact, a dog who regularly absconded with goods from the fashionable shops of Paris. This dog thief is described as “a big Newfoundland.” On the day of his arrest, he entered a large shop located near the Bastille. According to the Gloucester Citizen:

“After having ‘prospected around’ for some time, [he] selected a bundle of shooting jackets, seized them between his teeth, and made off with them.”

The shopkeeper and his assistants fell into an uproar. They immediately cried for the police—and for the help of neighboring shopkeepers and citizens. As the newspaper reports:

“The spectacle presented by the hunt was of the most animated character. Half the staff of the store, accompanied by a hundred or so small boys and several policeman, pursued the canine purloiner until he was brought to bay.” 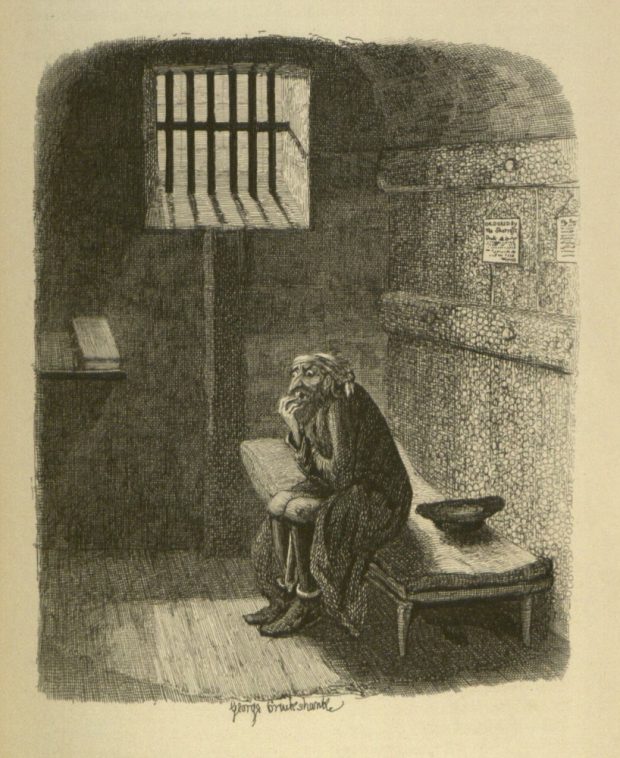 Fagin in His Cell by George Cruikshank, 1838.
Copperplate Engraving,

The bundle of shooting jackets was recovered. As for the dog, he was “marched” to the police station where he was held, pending his removal to the pound. The newspaper surmised he would spend the rest of his life there since, after an investigation, it was discovered that this was not his first offense. He had, apparently, been visiting several other shops in the area “for predatory purposes.” As the newspaper states:

“The conclusion was arrived at that the animal must have been trained to thievery by some of the ‘Fagins’ of the Faubourg St. Antoine.”

The Parisian dog thief of 1888 wasn’t unique among his species. There are other reports of Victorian era dogs trained to steal for their masters—even one featuring another Parisian Newfoundland. A May 1892 edition of the Derbyshire Courier relates the story of ‘a splendid Newfoundland’ in Paris who was called ‘Black.’ Every morning, Black’s owner sent him out to bathe in the river. As the newspaper reports:

“When ‘Black’ had finished his plunge, he always swam up to one of the woodpiles heaped on a barge by the quay, seized a large log, and carried it home to his mistress.”

Black continued stealing from the woodpile everyday for months until, at last, the owner of the woodpile complained. According to the Derbyshire Courier, it was found that “the dog had been trained regularly to the theft.”

Many dogs have a natural propensity for retrieving. Teaching them to go fetch something—even if that something is in a shop or on a neighbor’s property—isn’t as difficult as it may sound. One can only imagine how useful a dog trained to steal would have been for the Victorian criminal classes, or for those in straightened circumstances. It was definitely a way for a canine to earn his keep, although, for law-abiding dogs, I certainly don’t recommend it!