During the late nineteenth century, an afternoon tea was one of the most informal entertainments to which a fashionable lady could invite her friends and acquaintances. The menu was simple, as were the dress requirements, and etiquette only required that a guest stay—at minimum—half an hour. It was an easy method of entertaining and one that soon grew in both popularity and extravagance, leading an 1895 edition of Table Talk to declare that the once inexpensive ritual had evolved into “a party in the daytime…[a] large, gas lighted ball at five o’clock where half of the ladies were in décolleté dresses, the other in fur tippets.”

Some fashionable ladies attended as many as nine teas in a single afternoon, tasting a bit of everything and drinking a great deal more tea than they normally would have. The effects of such overindulgence could be dire. According to Table Talk:

“The sipping of so much tea produces the nervous prostration, the sleeplessness, the nameless misery of our overwrought women.”

While magazines of the day might warn of the dangers of nervous conditions, influenza, headaches, and other tea party-related ailments, these warnings appear to have only applied to the most extreme situations (i.e. drinking gallons of tea while garbed in a low-cut gown). For the average tea-drinking female, an informal afternoon tea party provided the perfect opportunity for a chat with one’s friends—and for a small bite to eat to tide one over until the dinner hour.

No formal invitation was required for an afternoon tea. Instead, a lady simply announced the day and hour of the tea by writing it on the back of her visiting card. If she must send a more personal note round to a friend or acquaintance, it was generally phrased in a casual manner. As an example, the 1900 edition of The New Century Standard Letter-Writer includes a sample of a letter for “Inviting a Lady to an Informal Afternoon Tea.” It reads:

A few of our friends are coming to afternoon tea on Friday next, and we hope to have a little good music. Perhaps you may be able to look in for half an hour: if so, I should be very pleased to see you.

Informal invitations—whether delivered by letter or announced via visiting card—did not require a response. 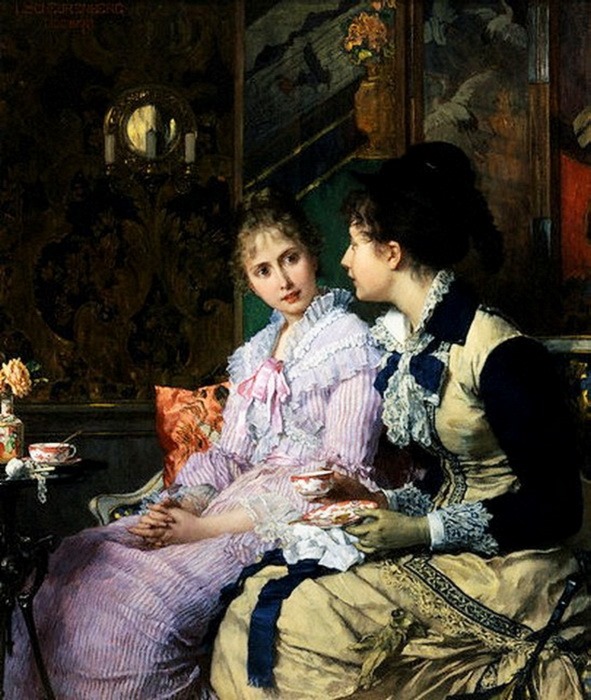 The menu at an informal afternoon tea was fairly simple. A hostess generally offered her guests a choice of hot tea or chocolate. According to Table Talk:

“A large table is spread with a white cloth; at one end is a tea service with a kettle of water boiling over an alcohol lamp, while at the other end is a service for chocolate. There should be flowers on the table and dishes containing bread and butter cut as thin as a shaving.”

Coffee, punch, and lemonade were also sometimes offered at afternoon tea, but alcoholic beverages, such as wine, were never acceptable. As for food, the fare was usually quite light and sweet. In her 1889 book The Home Manual, Mrs. John Logan describes a typical menu for afternoon tea, writing:

“Thin slices of bread and butter, sandwiches, fancy biscuit or cake, tea, coffee, or chocolate, ice-cream, and bouillon are offered. Punch and lemonade—but no wine of any kind—may be added if desired; and also salted almonds, cakes, candies, and other dainty trifles.”

Whatever a lady chose to serve for her afternoon tea—whether sandwiches, cake, fruit, or biscuits—she was advised to make certain that all of her ingredients were of the very best quality.

For an informal afternoon tea, the hostess greeted her guests with a cordial handshake (for more information on Victorian handshaking, see my article HERE). What she did next depended on the size of the party. As Mrs. Logan explains:

“If the number of guests is small, the hostess should walk about the room, talking with her visitors; if large, she should remain near the door, and have the aid of other ladies, who should entertain the guests, ask them to take refreshments, and make introductions when necessary.”

The lady of the house was usually assisted by one or two servants. They were responsible for clearing away soiled cups and plates and for keeping the table clean and fresh. When it came to pouring the tea and chocolate, however, the services of a lady were required. If the hostess was unable to pour, the duty must fall to another lady of the company. 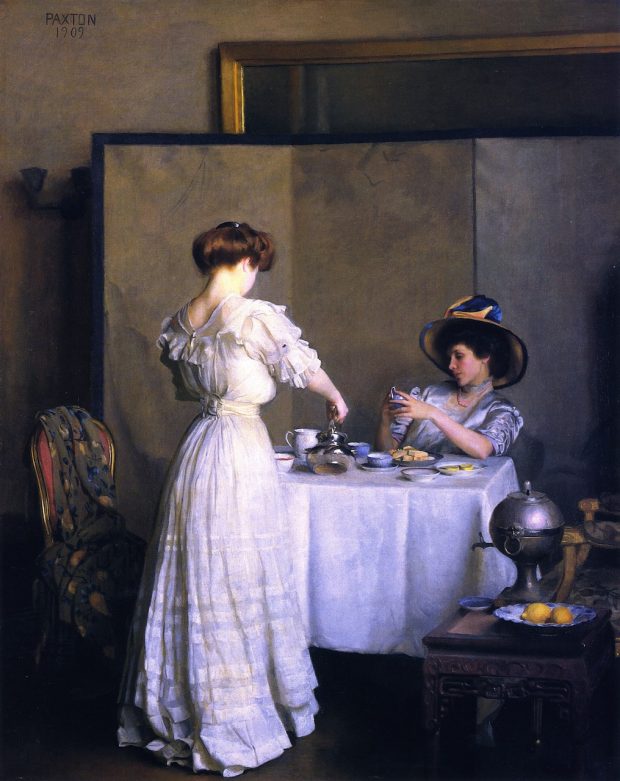 When attending an informal afternoon tea, a lady generally wore an afternoon dress. Afternoon dresses came in a variety of styles, but, for teatime, a style of gown which closed to the throat was preferable to one with a low neckline since, as Table Talk explains:

“Nothing is worse form nowadays than full dress before dinner.” 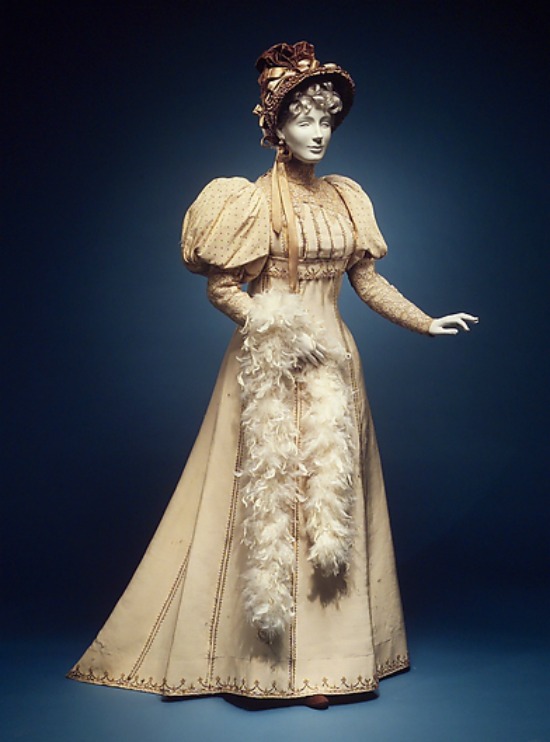 By the late 1870s, some ladies were beginning to don tea gowns. These gowns were loose fitting and fairly unstructured, leading to criticism that they were too much like dressing gowns to be considered proper. However, as the century progressed, tea gowns became much more acceptable, especially for those ladies entertaining female friends at home. 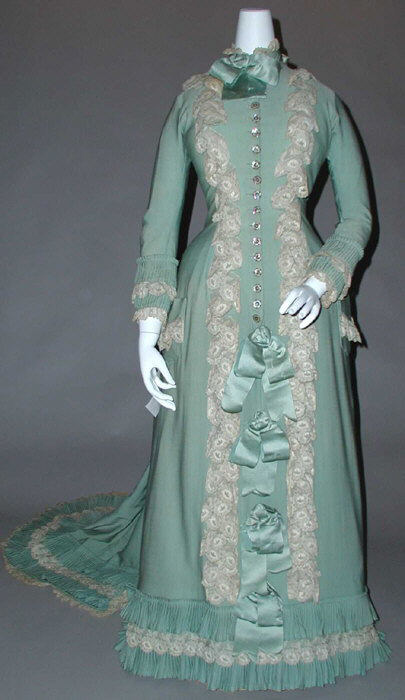 Ladies attending an informal tea were expected to remove their bonnets. This rule applied even to those ladies who were staying the minimum amount of time. As for gloves, a lady could remove them or keep them on, as she preferred.

What About the Gentlemen?

Informal afternoon teas were not strictly segregated by sex. Many women were happy to invite gentlemen acquaintances to their tea parties. As to whether gentlemen enjoyed the ritual, that very much depended on their country of origin (or so popular magazines would have one believe). The 1887 edition of the Ladies’ Home Journal and Practical Housekeeper asserts:

“Gentlemen do not enjoy five o’clock tea so much as ladies in America, but in London one meets all the fashionable world at five o’clock, and it is becoming more common to meet the superior sex at afternoon tea, both in Washington, New York and other large cities.”

An informal afternoon tea was a great way for Victorian era ladies and gentlemen to gather together for tea, sweets, and conversation. I hope the above has given you some idea of how a late nineteenth century hostess might have arranged such an affair. In future, I’ll be writing more on afternoon tea, specifically formal teas and receptions, which often featured music, entertainment, and as many as 100 guests or more. Stay tuned! 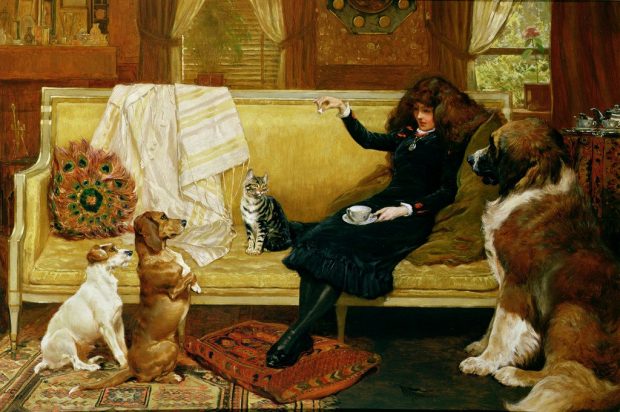