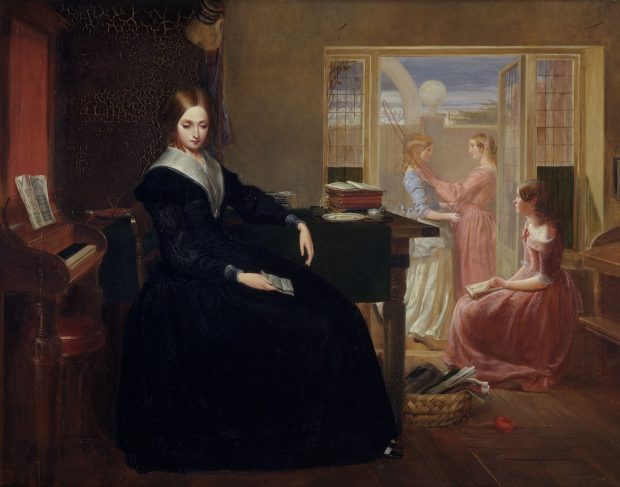 A governess occupied a unique position in a Victorian household. She was neither servant, nor family member. She existed in a sort of in-between world which often left her feeling isolated and alone. To combat this, the young governess was advised to cultivate a tolerance for solitude. Author Susan Ridout addresses this in her somewhat depressing nineteenth century book of advice, Letters to a Young Governess on the Principles of Education and Other Subjects Connected with Her Duties (1840):

“Consider therefore, before you enter a family, how far you are able to support the solitude into which you must be thrown, in such a situation. It is not now a separation merely from friends and relations to which you are called; it is a seclusion from society altogether, at least from any which sympathizes with you.”

Seclusion from society not only left a Victorian governess isolated and alone, it also left her vulnerable to the unwelcome advances of men, both in and out of the household. To that end, Ridout instructs the young governess to be gentle, modest, reserved, and dignified, stating that:

“If there are young men in the family where you reside, remember that your carriage will generally govern theirs; they will not presume, if you are discreet and unpretending.”

On occasion, modesty and dignified reserve did not provide enough of a deterrent to gentlemen who were determined to take liberties with an unprotected female. Cases abound of governesses who were kissed, groped, and otherwise assaulted in the course of their employment. On these unfortunate occasions, there was little incentive for the governess to complain to her employer, since, as Ridout implies, gentlemanly presumptions were generally marked down to some lapse in decorum on the part of the governess. If she brought them to the attention of the mistress or master of the household, she risked being let go without a reference.

Fortunately, the courts were not always as indifferent to the plight of governesses as the rest of society. Below are just a few instances of advances made toward young governesses, some of which were ultimately dealt with in a Victorian court of law.

In some cases, the overtures of a gentleman of the household could lead to a marriage proposal. This happened with enough regularity—both in reality and in popular fiction—that the young governess could be forgiven for dreaming that she might, too, meet a wealthy Mr. Rochester during the course of her employment. In reality, however, the man of the house was usually more of a middle-aged fellow in a marital rut than a single, charismatic hero. 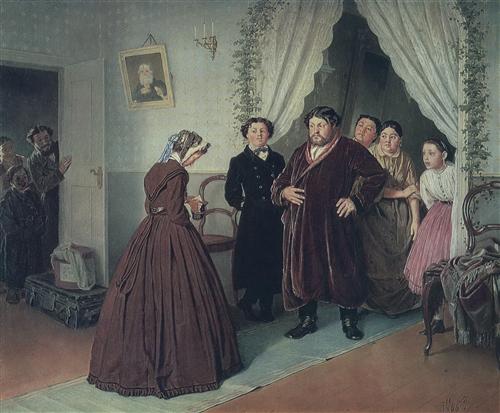 Arrival of a New Governess in a Merchant’s House by Vasily Perov, 1866.

The 18 November 1893 edition of the Yorkshire Gazette reports the case of Mr. Hearn, a wealthy, fifty-four year old father who had engaged Miss Crosswell, a governess, to instruct his daughters on the pianoforte. He subsequently fell in love with Miss Crosswell and made her an offer of marriage. Miss Crosswell eagerly accepted, but when Mr. Hearn’s daughters protested the engagement, he broke it off. Miss Crosswell pleaded with Mr. Hearn to stand by her. When he refused, she promptly sued him for breach of promise. According to the Yorkshire Gazette, the jury awarded her £475, a sum which they considered to be “an approximate pecuniary equivalent to her pain and loss.”

“His wife had occasion to remonstrate concerning his marked attentions to the attractive young lady who had for a considerable period acted as governess in the family.”

When confronted, the governess agreed to find another situation and asked for a leave of absence in order to do so. The husband left the family home at the same time, ostensibly on a business trip. The following day, the pair was spotted “at a junction in England,” after which they were never seen again.

A governess and her male employer in 1901 were not so lucky. The Sheffield Independent states that, after ten years of marriage, Leopold Moulton and his wife, Lucy, hired a governess named Miss Robson to teach their children. Less than two years later, Mr. Moulton and Miss Robson departed the family home, intending to elope together to Australia. The pair was “caught together at Marseilles,” at which point they made a full confession. Mrs. Moulton subsequently sued her husband for divorce on the grounds of cruelty and adultery and was granted a dissolution of marriage.

Far more common than marriage proposals and elopements, were the everyday instances of physical encroachments perpetrated against the vulnerable young governess. If committed by a member of the household, these insults were difficult to defend against. However, if an assault was perpetrated by a man outside of the home, a governess sometimes had recourse in the courts—especially if that assault was witnessed by others. 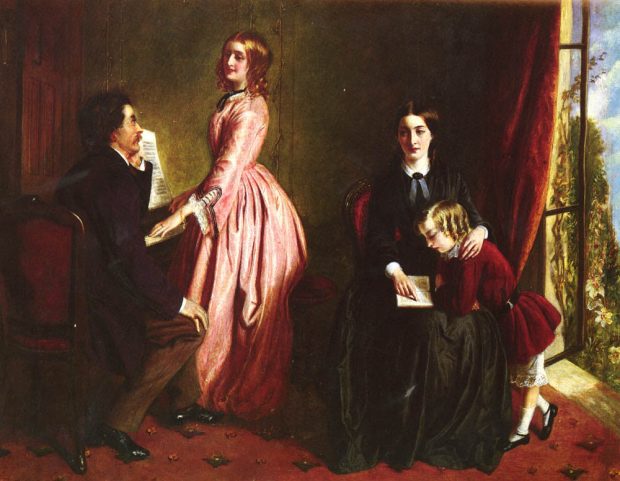 The Governess by Rebecca Solomon, 1851.

In 1874, while out walking in a field with her three young charges, governess Lydia Jackson crossed paths with Mr. John Bickley, a young gentleman of the neighbourhood who was heir to a great fortune. Mr. Bickley was driving by in a cart when he saw Miss Jackson gathering violets. He made disparaging remarks about the children and, when Miss Jackson did not reply, the 20 May 1874 edition of the Norwich Mercury states that Mr. Bickley “did something to his trowsers; and subsequently tying his horse up, he came towards plaintiff in that position.”

Miss Jackson ran. Mr. Bickley followed and soon overtook her, grabbing hold of her jacket. Miss Jackson was able to get free and, along with the children, ran to the cottage of a neighbour. When later confronted in court, Mr. Bickley denied he had ever even seen or spoken to Miss Jackson. He claimed she was either lying or that it was a case of mistaken identity. Fortunately, the children and the neighbour were all able to verify Mr. Bickley’s presence in the field of violets that afternoon. The Norwich Mercury reports that:

“The jury almost immediately returned a verdict for the plaintiff for the full amount claimed, namely £50, the usual costs following. His Honour, addressing the jury, said that if it was any satisfaction to them to know it, he quite concurred in the decision at which they had arrived.”

In a similar case from 1881, a governess by the name of Jane Hutton was out walking when Christopher Henderson, a railway worker, grabbed her by the wrist, pulled her close to him, and attempted to kiss her. Miss Hutton ran away, but, as the Dundee Courier relates:

“He ran after her and overtook her, and again seized hold of her by the wrist and arm, dragged her on to the embankment, pulled her on to his knee, and placed his arm round her waist.”

What happened next is not entirely clear from the reports, but whatever transpired, it was enough to result in Mr. Henderson being sentenced to thirty days’ imprisonment.

Cases of governesses murdered by their employers are not as numerous as those involving assault, but they do exist and are, in my opinion, some of the most tragic. Victorian governesses were often alone in the world, without friends or family to inquire after them if they should happen to disappear. With no one to ask questions, a governess’s murder could go undiscovered for years. For example, in 1843, a governess by the name of Miss Crossland was employed by Mr. and Mrs. Clarke at Firth Wood Farm. The 19 August 1893 edition of the Yorkshire Evening Post reports that:

“Clark became enamoured of her and got rid his wife, to whom he allowed £60 a year, while he retained Miss Crossland as housekeeper.”

Mr. Clarke was a big man who had been known to participate in prize fights. When Miss Crossland later disappeared, the locals assumed she had either “died in giving birth to a child” or met with foul play. 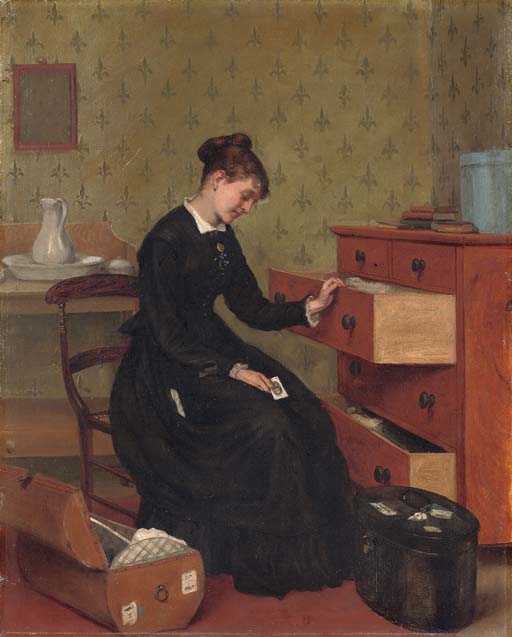 Her ultimate fate was destined to remain a mystery until, forty years later, railway workers excavating a field near Firth Wood found “the remains of a young woman” buried in a shallow grave. The newspaper reports that “the skull was crushed onto the chest, and both jaws were broken, as well as several ribs.” By this point, Mr. Clarke had long since died himself and, though the remains were widely believed to be those of Miss Crossland, the Coroner in the case declined to hold an inquest.

Not every position held by a Victorian governess was fraught with physical danger. There were many families (such as the family the heroine works for in my Victorian romance The Lost Letter) who were genuinely decent and respectable, allowing the governess to go about her duties without fear of being importuned by the gentlemen of the household. With that being said, it is important to remember just how vulnerable a governess was during the nineteenth century and just how precarious her situation could become if an unscrupulous man should decide to embark on a seduction.

**Author’s Note:  This article was originally published in August at the English Historical Fiction Authors Blog.

Ridout, Susan. Letters to a Young Governess on the Principles of Education and Other Subjects Connected with her Duties. London: Edmund Fry, 1840.