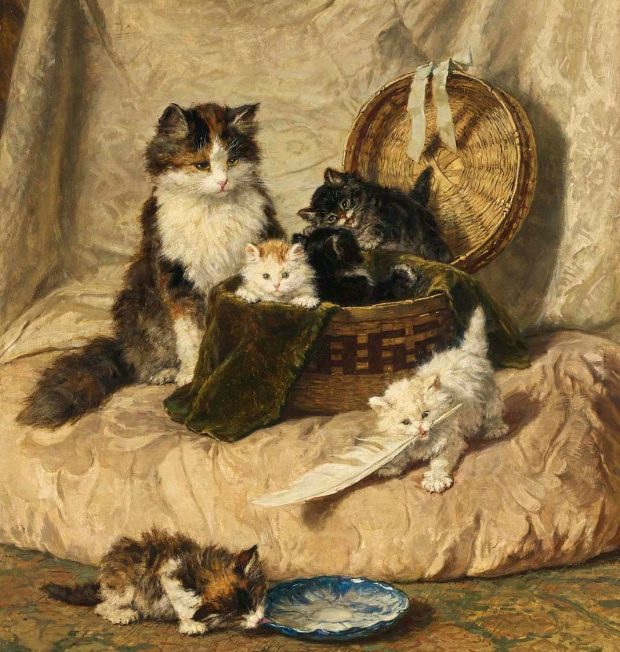 During the mid-1880s, the silhouette of women’s gowns was characterized by the size and shape of the bustle or “dress improver.” Unlike the more moderate-sized dress improvers of the 1870s, the bustle of the 1880s was—at its most extreme—large, protruding, and shelf-like. For fashionable ladies with cats, it provided a convenient ledge on which to strap a satin-lined cat basket.

An 1887 edition of the Derby Daily Telegraph refers to these cat bustle basket contraptions as “living dress improvers.” They were first spotted in France in the spa town of Luchon where a certain stylish, cat-loving lady had devised a way of carrying her Pyrenees cat in a basket atop her bustle so that her hands could remain free while out gathering wildflowers. According to the Derby Daily Telegraph:

“A little basket padded and lined with satin, and decked with ribbons to harmonise with the wearers’ costume, serves as a cradle for the furry pet, and is just large enough when closed to contain his body, with a hole cut to allow the egress of his head. The basket is fitted with strings and tied round the lady’s waist, to whom the slightly additional weight is no inconvenience worn as an extra bustle…”

The cat bustle basket was an instant hit. The 1887 edition of Truth describes it as being “daring, original, and piquant.” It soon found imitators among other fashionable ladies on holiday in France and, as the Derby Daily Telegraph reports:

“In a few days there were not cats enough to be found to meet the demand for living dress improvers.”

The fashion for cat bustle baskets was so popular that, according to Truth, it even “dared to invade the sanctuary at Lourdes with a mountain tom or tabby on the dorsal hump.” Whether or not this fashion ever made its way to London is unclear. However, it’s worth noting that cats were extraordinarily popular as pets in the 1880s. An 1882 edition of the Gentleman’s Magazine states that housecats in London numbered 300,000 (a figure which did not include the legions of “houseless wanderers” roaming the city). To feed these pampered pets, city-dwelling Victorians are reported to have spent £100,000 per year on “purchasing horse-flesh from the cats’ meat men of London.”

With so many cat-loving Londoners, I wouldn’t be surprised if a fashionable lady or two constructed a cat bustle basket of her own to carry around her favourite feline. Unfortunately, I have no images of this ingenious contraption. 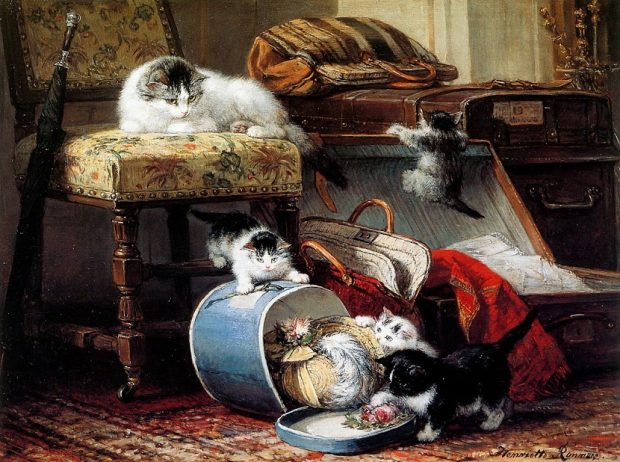 *If you’d like to learn more about the intersection of animals and Victorian fashion, check out these articles from my archives:

You can also find information on cats in the Victorian era in my new book The Pug Who Bit Napoleon: Animal Tales of the 18th and 19th Centuries.

“Our Ladies’ Letter: By One of Themselves.” Derby Daily Telegraph (Derbyshire, England), 26 September 1887. © British Library Board.