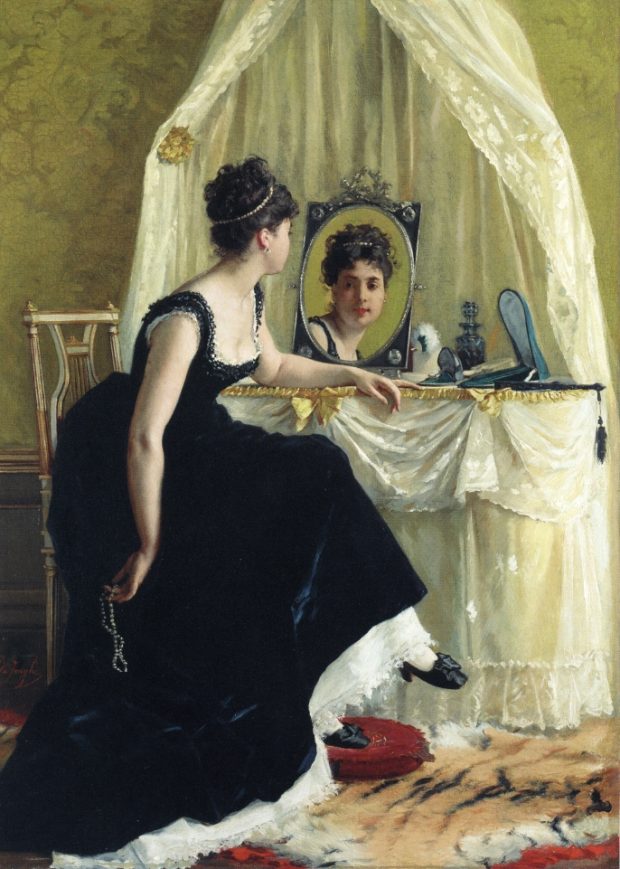 Long before the twentieth century invention of aerosol hairspray, Victorian women were using sticky hair products to fix their wayward locks stiffly into place. Of these, the most popular was a clear gum solution known as bandoline. Liquid bandoline could be purchased at most Victorian perfumers. It could also be made at home from ingredients like quince-seed, rose-water, cologne, and spirits such as rum or brandy. As the 1859 edition of Godey’s Lady’s Book explains:

“In some peculiar temperaments there is great difficulty of keeping the hair in its place on account of its fineness. This is especially provoking when, in the ball-room or dance, the hair becomes disordered from the least exercise; a mucilage prepared by boiling a few quince-seeds in water, till of a glutinous consistence, will in general remedy this defect.”

Along with wax pomatum, bandoline was part of a group of hair products which were referred to as “fixatures.” In his 1857 book The Art of Perfumery, G. W. Septimus Piesse describes how “the little feathers of hair, with which some ladies are troubled” could be made to “lie down smooth” with the aid of wax pomade. However, though hard wax was useful for smoothing down stray hairs, when it came to setting the entire coiffure into place, nothing could take the place of liquid bandoline. 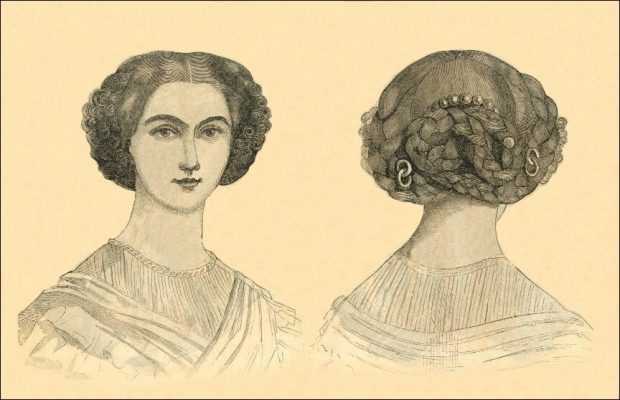 Piesse describes liquid bandoline as being “principally of a gummy nature.” In fact, commercial bandolines were chiefly made using gum tragacanth which was derived from a shrub of the same name. In his 1873 book Instruction and Cautions Respecting the Selections and Use of Perfumes, Arnold James Cooley explains that the resulting “vegetable mucilage” was then “usually combined with a little spirit, to preserve it, and with a little perfume, to render it more agreeable.”

Unfortunately, like other cosmetics of the Victorian era, commercial bandolines and gum solutions were often made with toxic or impure materials which could be harmful to the hair—or even result in it changing color. In his 1900 book The Human Hair, Its Care and Preservation, Joseph R. Stitson states that:

“The prepared bandoline and other gum solutions sold under different names, for the purpose of stiffening the hair and making it hold its shape in a given position, as well as for making it appear thicker, are sometimes injurious, owing to impure materials having been used; cases having been known where the hair has from such causes turned a rusty gray.”

For this reason, it was imperative that ladies purchasing commercial preparations of bandoline first ascertain the ingredients in the product before applying it to their tresses. In most cases, this was sufficient to prevent a hair catastrophe. However, as Stitson goes on to warn his readers, even when made with unobjectionable ingredients, bandoline could still be harmful. He explains:

“As the results obtained by the use of bandoline are due to the fact that the hair is coated, in whole or part, by it with a thin skin of some gum, it follows that the hair is deprived for a time of air and ventilation and is not particularly benefited by such applications.” 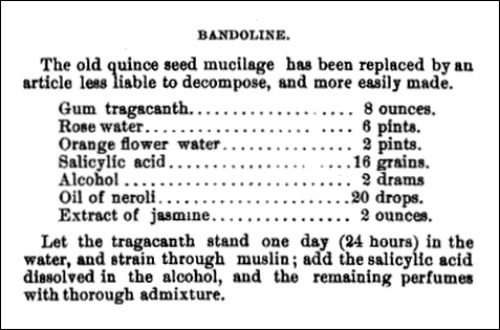 Some ladies opted to make their bandoline at home. As with many cosmetics, this option was often healthier for the hair as it allowed a lady control over the ingredients. When prepared at home, the 1859 edition of Godey’s Lady’s Book reports that:

“Generally bandoline is made by pouring boiling water on quince seeds, allowing the latter to soak in a warm place for a few hours, then squeezing the clear part through muslin, and preserving it.”

To this clear liquid, ladies then added some variety of spice essence to help preserve it. Godey’s advises that “half a drachm of essence of cloves to every half pint of bandoline will answer perfectly.” For ladies who did not care for the odor of cloves, they could instead add “essence of roses, i.e. otto of roses, dissolved in spirits of wine” or “essence of rosemary or of neroli.” Scents like bergamot, lemon, and almond were also quite popular. When combined with bandoline, Cooley reports  that the resulting product was then “named accordingly,” i.e. “Rose Bandoline” or “Orange-Flower Bandoline,” etc.

Bandoline could also be colored at will. Many preparations—both homemade and commercial—contained cochineal which gave the bandoline a red cast. The 1860 edition of Godey’s Lady’s Book reports that some bandolines were tinted with “ammoniacal solution of carmine, i.e. Bloom of Roses.” 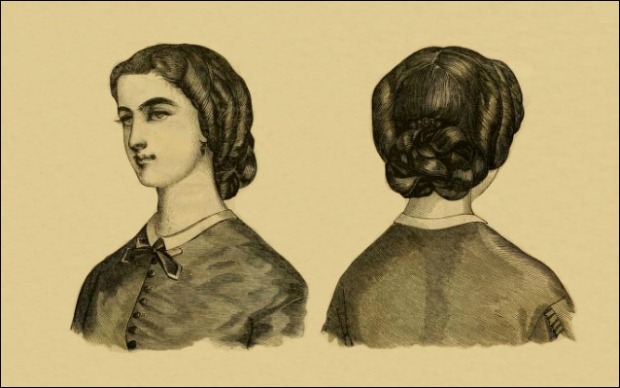 For rolled and plaited hairstyles, bandoline was often applied with a sponge.
Coiffure for a Young Lady, Godey’s Lady’s Book, 1863.

Liquid bandoline was applied to the hair either with a sponge or with the fingers, depending on the style preferred. According to Cooley:

“Bandoline is used by ladies, and by hairdressers, to stiffen and fix the hair in curl or place. It is applied either by moistening the fingers and passing the hair through them, or by means of a small piece of sponge.”

For more elaborate rolled or plaited styles, such as those in the 1860s, a sponge application of bandoline over the finished coiffure would help to hold it in place. While, for ringlets, an application with moistened fingers would help to set and style the curls. Most importantly, when using products like bandoline, ladies were advised to thoroughly wash their hair each week in order to remove the inevitable buildup of gummy residue and accumulated grime. 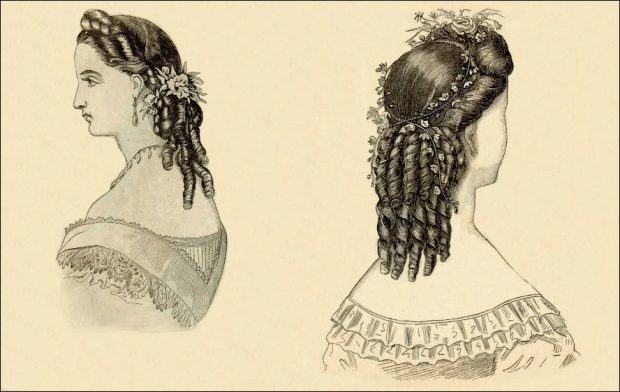 For ringlets and curls, bandoline could be applied with moistened fingers.
Coiffures, Godey’s Lady’s Book, 1865.

By the mid- to late 1870s, the popularity of gum solutions like bandoline was on the decline. As the 1876 edition of Godey’s Lady’s Book reports:

“Bandoline and cosmetics are rarely used; tonics that strengthen the natural growth and cleanse the scalp are resorted to now in preference.”

Though bandoline might have fallen from favor for a brief period, Victorian women would continue to use fixatures throughout the remainder of the century and well into the next. Whether comprised of rum, brandy, sugar water, or wax, these fixatures would help to keep stray hairs in place until the arrival of aerosol hairspray in the 1940s.

Cooley, Arnold James. Instructions and Cautions Respecting the Selection and Use of Perfumes with a Comprehensive Collection of Formulae and Directions for Their Preparation. Philadelphia: J. B. Lippincott & Co., 1873.