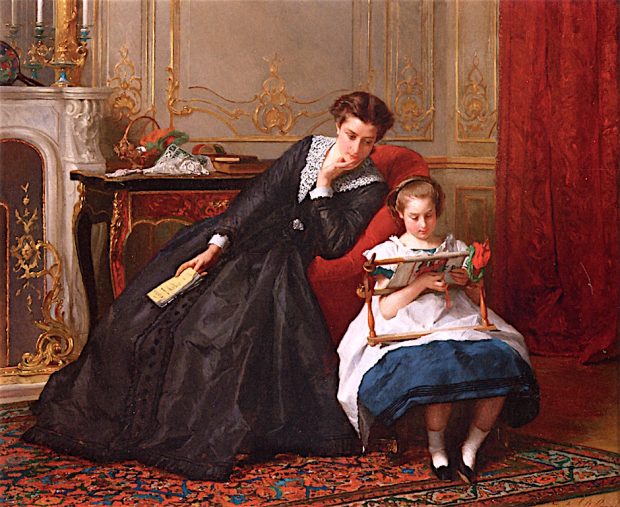 Hair styled with a center parting and plaits.
(An Embroidery Lesson by Gustave Leonard de Jonghe, 1864.)

For balls and other formal events, fashionable women of the early 1860s often arranged their hair in elaborate styles with artificial tufts, pads, and false plaits. On a day-to-day basis, however, Victorian women of more moderate means stuck to more practical styles. These styles included firmly pinned plaits, simple chignons, and rolls bound up in a hair net or secured with a ribbon. In today’s post, we take a brief look at some of these styles, specifically those which feature in my Victorian romance novel The Lost Letter.

At the beginning of my novel, the heroine, Sylvia Stafford, is working as a governess. She has no lady’s maid to assist her with her hair, nor does she have the time in the mornings to arrange her tresses in an intricate style. Instead, Sylvia and others like her would generally roll their hair into a simple chignon worn at the nape of their neck or twist it into a plain coil or intertwined sections of plaits.

The July 1860 edition of Godey’s Lady’s Book describes a simple coiffure comprised of four, intertwined sections of plaits. To create this style, the hair was divided first from “the centre of the forehead to the nape of the neck” and then by “a transverse parting” made from ear to ear. With the hair in four equally divided sections, the two sides of the front were then plaited back from the forehead. The two sides of the back were plaited as well, with the plait beginning “just above the ear.” 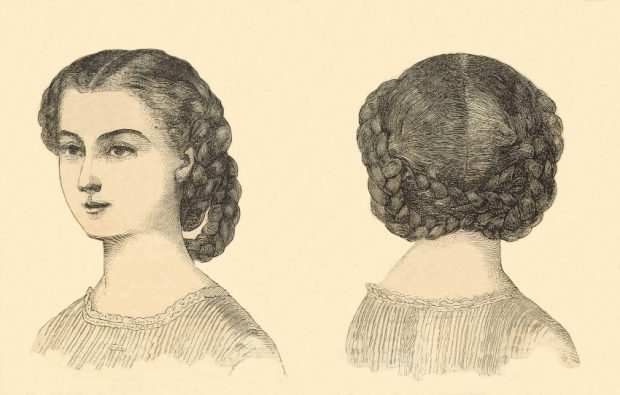 With the four plaits in place, all that was left was to secure them together. As Godey’s explains:

“The plait of back hair on the right hand side is passed across the nape of the neck, and the end fastened by a hair pin, under the root of the plait on the left side. The plait of the left side of the back hair is brought round to the right side, and fastened in the same manner; and thus the two plaits cross each other at the back of the neck. The plaits of the front hair are then brought round to the back of the neck, where the ends are fastened under the crossing of the plaits of back hair.”

A tightly plaited, well-pinned hairstyle could last throughout a busy work day. It not only served to keep one’s hair out of the way, but also to keep it clean and tidy. Plaits were generally unobtrusive, especially when bound close to the head. An employer was less likely to object to them than to clusters of curls or a more fashionable padded roll (styles which might lead a governess or companion to be accused of “putting on airs”). 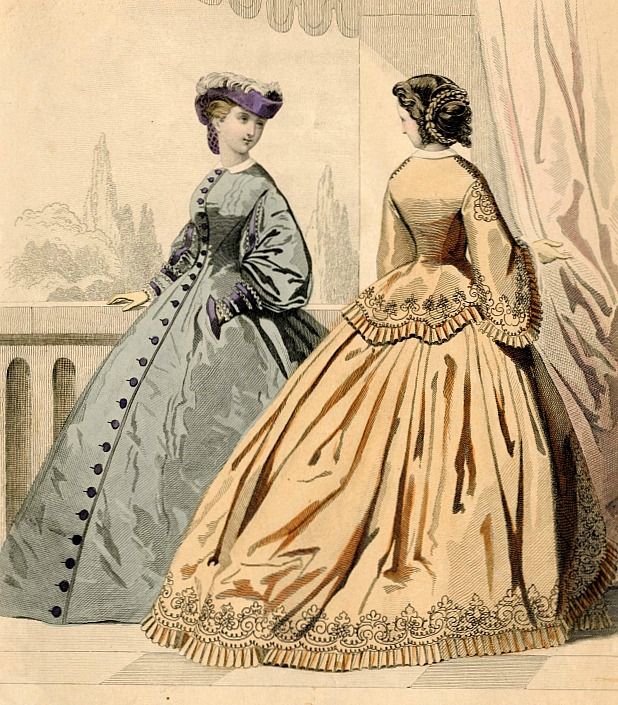 A simple chignon or “bun” was another option for the Victorian lady of more moderate means. All that was needed was a handful of pins. For added security, the bun could be covered with a fine, silk hair net. During the 1860s, “invisible” hair nets were available. Made in the same colours as a lady’s hair, invisible hair nets were a practical, everyday way to keep stray hairs in place without appearing gaudy or ostentatious. They were also quite suitable for keeping the hair out of the way during athletic endeavours. In The Lost Letter, for example, Sylvia wears an invisible hair net when she goes riding. 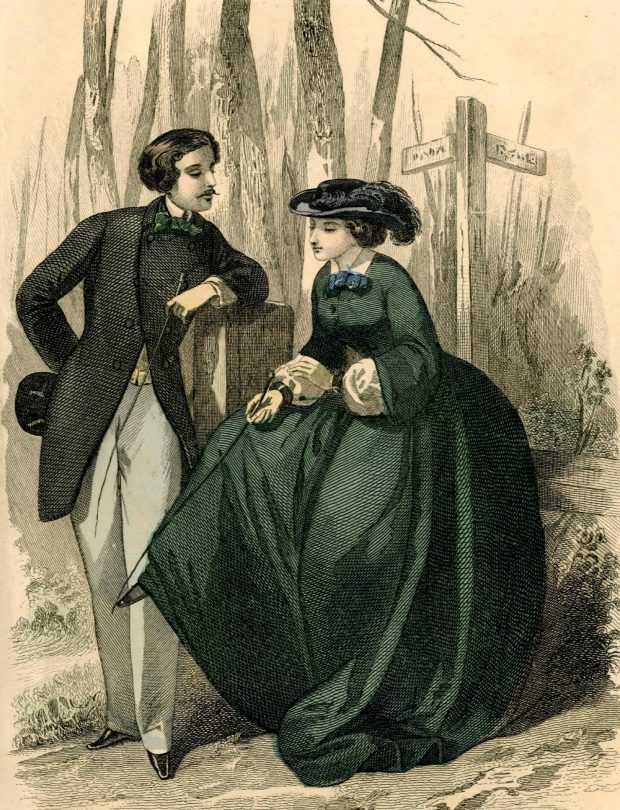 I hope the above has given you some idea of how ladies of the 1860s wore their hair on an everyday basis. For information on more elaborate styles, please see my article on Fashionable Coiffures of 1863.

Previous Post
The Etiquette of the Victorian Handshake: Advice on Opposite Sex Greetings
Read More
Next Post
Victorian Handcuff Bracelets for Engagement and Marriage
Read More