The Etiquette of the Victorian Handshake: Advice on Opposite Sex Greetings

“Among friends the shaking of the hand is the most genuine and cordial expression of good-will.”

The Ladies’ and Gentlemen’s Etiquette, 1877. 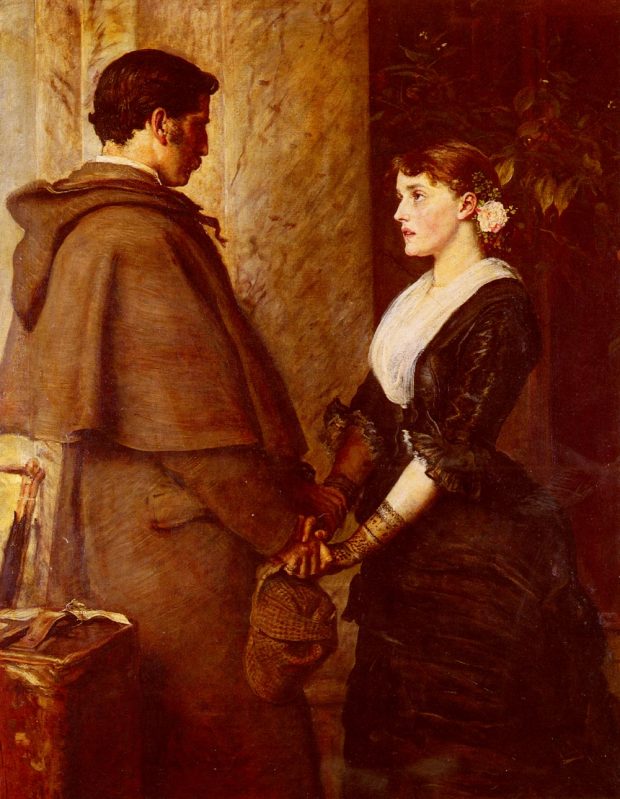 When we think of nineteenth century greetings, many of us naturally picture bows, curtsies, and subtle inclinations of the head. But these were not the only types of gestures with which to greet one’s friends and acquaintances. Fans of Elizabeth Gaskell will know that, in some cases, a handshake was equally appropriate. In her 1855 novel North and South, John Thornton, a northerner, regularly shakes hands with his friends. Southerner Margaret Hale, however, is unfamiliar with the custom. In one of the most memorable scenes from the novel, Gaskell writes:

“When Mr. Thornton rose up to go away, after shaking hands with Mr. and Mrs. Hale, he made an advance to Margaret to wish her good-bye in a similar manner. It was the frank familiar custom of the place; but Margaret was not prepared for it. She simply bowed her farewell; although the instant she saw the hand, half put out, quickly drawn back, she was sorry she had not been aware of the intention.”

Margaret can be forgiven for being unprepared for Mr. Thornton’s frank and familiar greeting. Like much in Victorian society, the handshake was governed by strict rules of etiquette, especially when that handshake was shared by members of the opposite sex. In general, handshakes between men and women could only be initiated by the lady. As author Eliza Duffey explains in her 1877 book The Ladies’ and Gentlemen’s Etiquette: “A man has no right to take a lady’s hand until it is offered. He has even less right to pinch or retain it.” Similar advice can be found in the 1898 publication Manners and Rules of Good Society, which declares that:

An article on “How and When to Shake Hands” from a 1900 issue of The Delineator offers an even more restrictive take on the etiquette of opposite sex handshakes, stating:

“When a man is introduced to a woman she does not shake hands with him unless he is decidedly elderly or distinguished. If he is the husband or brother of the woman presenting him, it is natural to receive him cordially by shaking hands; but it is not good form to do so if he is a mere acquaintance.”

By contrast, all of the above publications agree that, a hostess should extend her hand to every guest, whether that guest be male or female. According to Manners and Rules of Good Society, a lady was also expected to shake hands when introduced to “the relations of her intended husband” or “on being introduced to the friend of an intimate friend.” In addition, if she was conversing with a new acquaintance with whom she had “much in common,” proper etiquette decreed that she should shake their hand upon taking her leave. 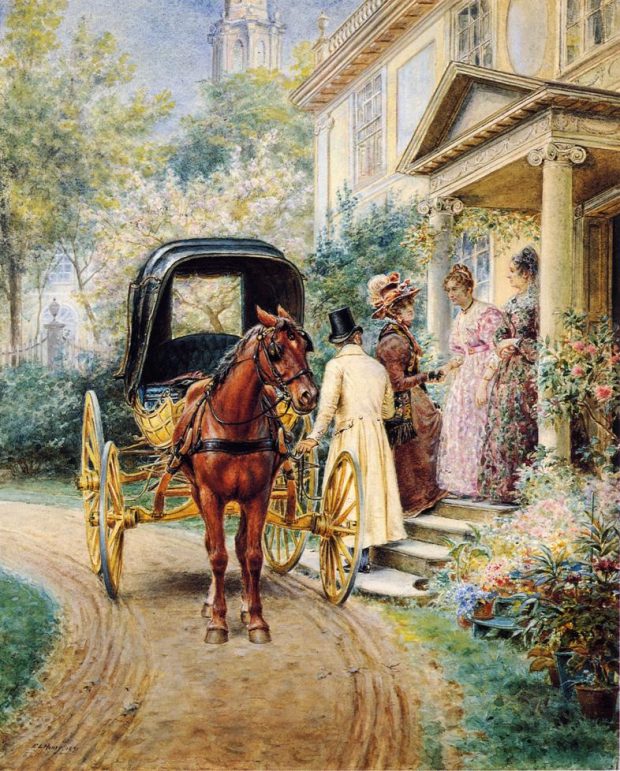 Mrs. Lydig and Her Daughter Greeting Their Guest by Edward Lamson Henry, 1891-1897.

The manner of shaking hands was just as important as deciding whose hand was appropriate to shake. Duffey reports that the right hand was the preferred hand to offer (though she is careful to note that “the French give the left hand, as nearest the heart”). In earlier years, it had been fashionable to raise the arm high when extending the hand. By the end of the century, however, a more moderate style of handshake had come into fashion. As Manners and Rules of Good Society explains:

“The hand, instead of being extended straight out, is now offered on a line or parallel with the chest, a trifle higher than the old-fashioned style, and the fingers of the hand are held and gently shaken, but the palm is not grasped or even touched.”

Despite the above advice, there is actually some dispute about whether a handshake was limited to just the fingers. Duffey warns that “a lady who has only two fingers to give in handshaking had better keep them to herself.” While, the Delineator advises that:

“When shaking hands—or, rather, taking the hand—grasp it firmly, do not take merely the fingers.”

Whether grasping the entire hand or just the fingers, Victorian etiquette seems to agree that the hand should be taken firmly and with a light pressure. After the initial grasp, the hand should be pressed gently and relinquished quietly. Eye contact during this brief exchange was also important. As the Delineator states:

“The friend who takes our hand with a cordial grasp and looks straight into our eyes at the same moment produces a feeling that the owner of the hand has a warm heart.”

Those who shook hands with a hard pressure followed by a violent pumping or shaking action were viewed as being inconsiderate. While, according to the Delineator, those who extended a “limp, weak, lifeless hand” and looked “over one’s shoulder” were not the sort of people on whom one could “depend in an emergency.” 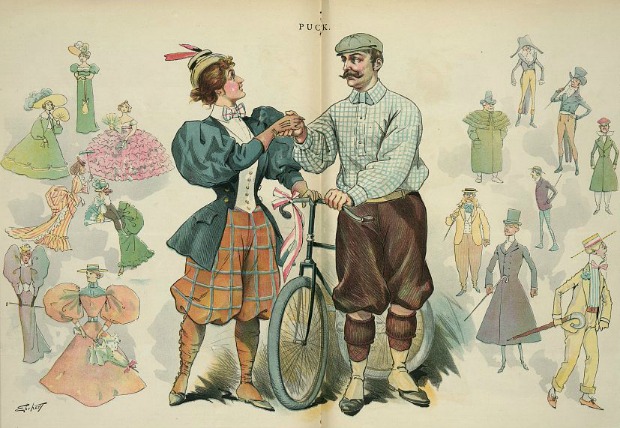 A Man and Woman on Bicycles Shake Hands, Chromolithograph, Puck, 1895.
(Library of Congress)

In shaking hands, strict etiquette required that a gentleman first remove his glove. However, if there was a chance that his hand might be clammy, it was permissible for him to leave his gloves on. Warm, clammy hands were anathema to the Victorians. To that end, multiple etiquette manuals advised readers to make sure that their hand was cool and dry before attempting a handshake. As the 1854 book Hints on Etiquette and the Usages of Society warns:

“Never, indeed, offer your hand unless assured that it is in a presentable state of frigidity; for the touch of a tepid hand chills the warmest feelings.”

In my upcoming Victorian romance novel, The Lost Letter, governess Sylvia Stafford must explain the etiquette of bows and handshakes to her two young charges—the daughters of a Cheapside merchant. I close this article with her example, which provides one of the few exceptions to the rule that a lady must offer her hand first:

Sylvia used a piece of chalk to write a single word on the slate she held in her lap.

She lifted it up for their perusal. “What do you suppose I did?” she countered. “Clara? Cora? How does one greet a gentleman of this rank?”

Cora frowned, staring at the word in consternation.

Sylvia affected to give this some consideration. “I certainly may have done if we had been in a ballroom and were about to dance,” she replied, “but we were in a parlor just like the one you have downstairs. Would you curtsy to an earl there, do you think?”

Sylvia smiled. “That would be quite acceptable, dear, if he were an acquaintance of equal or lesser rank. An earl, however, is a person of superior position. It is his privilege to extend his hand to us.”

Clara made a face. “I do not want to shake his hand.”

“Indeed,” Sylvia said. “He is not likely to offer it. Instead, he will bow to you and in return, you may incline your head, thusly, in a polite bow of your own. This will suffice for any person of superior rank, unless,” she added with a solemn tone, “you should one day meet the Queen.”

Duffey, Eliza Bisbee. The Ladies’ and Gentlemen’s Etiquette: A Complete Manual of the Manners and Dress of American Society. Philadelphia: Porter and Coates, 1877.

Hints on Etiquette and the Usages of Society. London: Longman, Brown, Green, & Longmans, 1854.

Manners and Rules of Good Society: Or, Solecisms to be Avoided. London: Frederick Warne and Co., 1898.

Home  »  Blog  »  The Etiquette of the Victorian Handshake: Advice on Opposite Sex Greetings