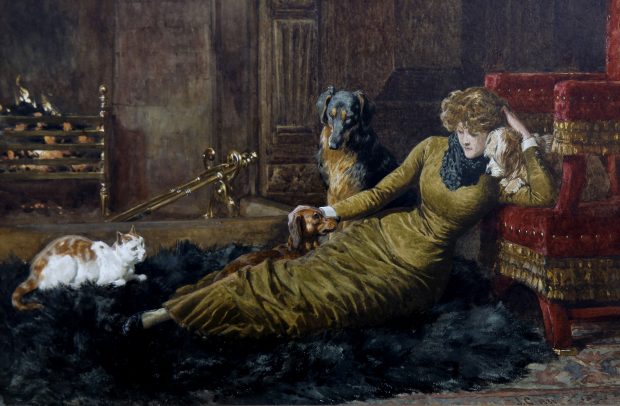 The nineteenth century news is filled with reports of hero pets rescuing their masters and mistresses from various catastrophes. Dogs routed burglars and saved children from drowning, while cats meowed the alarm when the house was on fire or when a family member had stopped breathing in their bed. Both cats and dogs were also known to intervene in cases of spousal abuse. For a battered Victorian wife, this animal intervention could sometimes mean the difference between life and death.

In July of 1867, a man named George Amey was brought before the Marlborough Police Court in London on the charge of brutally assaulting his estranged wife, Isabella. George had long since moved out of the home he shared with his wife and was currently cohabiting with another woman. Isabella, meanwhile, remained in the family home in Tottenham Street with only her cat, Topsy, for companionship.

The last Saturday in August, George came to visit Isabella. The 6 July 1867 edition of the Illustrated Police News reports that, after a few harsh words:

“He knocked her down, jumped on her, and then throwing himself on her, seized her by the throat, and attempted to strangle her.”

George might have killed Isabella if not for Topsy’s sudden—and rather unexpected—intervention. Upon seeing her mistress being ill-used, the faithful cat sprang into action. As the Illustrated Police News relates:

“The wife told the warrant-officer Roskelly that while on the ground and screaming, a favourite cat, named Topsy, suddenly sprang on her husband and fastened her claws in his eyes and her teeth in his face. Her husband could not tear the cat away, and he was obliged to implore her to take the cat from him to save his life.”

George was arrested, charged, and ultimately sentenced to prison for one month. 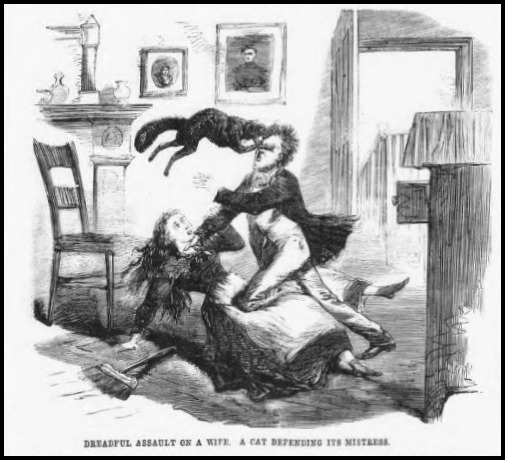 In a somewhat similar case from 1887, a man by the name of Charles Sutton was brought before the Marylebone Police Court on the charge of assaulting his wife, Elizabeth. According to the 10 March 1887 edition of the Shields Daily Gazette, Charles had returned home drunk in the middle of the day. When Elizabeth told him that “his condition was disgraceful,” he responded by striking her in the stomach with his knee. He then threatened her with a knife. At this point, the newspaper reports:

“He was prevented doing anything to her by her retriever dog attacking him.”

Charles Sutton was sentenced to six weeks imprisonment, ordered to pay a fine of £20, and advised to exhibit good conduct for the next six months. 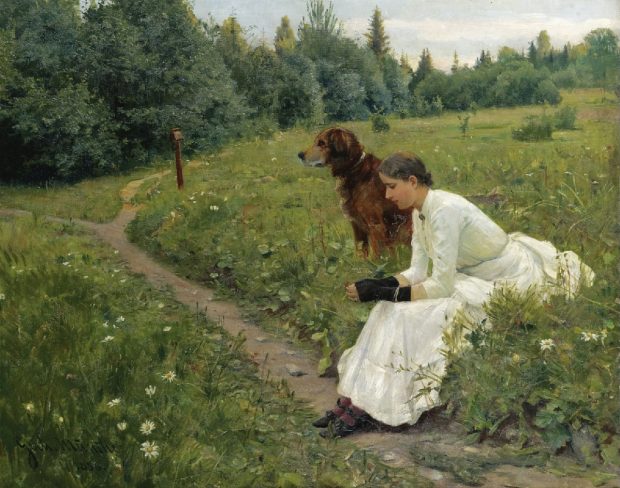 In a much more severe case from 1892, a deranged husband attempted to murder his wife with a knife. The 3 December 1892 edition of the Lisburn Herald and Antrim and Down Advertiser reports the case of a wealthy farmer named Laurence Archer who had been married for over twenty years to his wife, a respectable woman of fifty with whom he had 12 or 13 children. Mr. Archer was a jealous man, prone to erratic behaviour., who had always been suspicious of his wife, even though there was never any reason to doubt her good character.

One evening, after spending the day drinking in the village, he returned home and found his wife preparing his supper. As the newspaper reports:

“She asked him to take his supper, and he asked her why she wouldn’t take hers with him. She replied that she had taken hers with the children when they came from school, and that she was then going out to tie up the cattle. ‘I’ll give you tying up the cattle,’ he said. He caught her by the neck, threw her down on the ground, and pulling out a penknife with a very sharp blade, he commenced to hack away at the woman’s throat.”

Mr. Archer managed to stab his wife several times before his violent attack was interrupted by the appearance of the couple’s eleven-year-old daughter, Lizzie. The child threw herself on her wounded mother, but Mr. Archer was not deterred from his course. He swept his little daughter out of the way” and raised his knife to deliver a death blow to his wife. According to the Lisburn Herald:

“At this point, the child states, a bull-terrier belonging to her father sprang at the man and caught him by the wrist which held the knife just as he was about to make another stab. The pain of the wound which the dog caused him, and the yelling of his children for help, all combined to frighten him, and he rushed out, swung the dog from his arm, and ran towards the River Barrow.”

The next morning, an empty fishing boat was found floating in the river and, on the opposite bank, there were footprints in the mud. All signs pointed to Mr. Archer having successfully made his escape. Whether he ever returned to his wife and thirteen children, I do not know, but I like to think that, if he ever did show his face again, the police—and the bull terrier—were waiting for him. 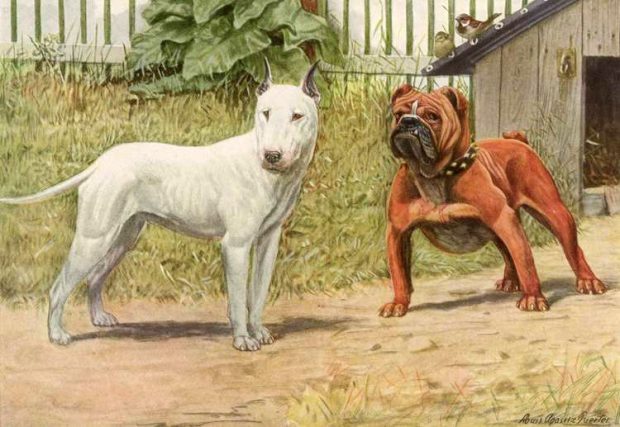