In 1893, a woman by the name of Margaret Gainer was arrested, charged, and ultimately sentenced to thirty days imprisonment for stealing a bottle of violet perfume from a hairdresser’s shop. The hairdresser had seen her take the bottle and slip it into her pocket, but when he gave her the choice of putting the bottle back or facing the consequences, Miss Gainer steadfastly refused to relinquish the violet perfume. Her motivation for the theft—and her subsequent unwillingness to part with her ill-gotten gains—is not entirely clear; however, I suspect it had more than a little to do with the late Victorian violet fad.

Violet was the reigning fragrance of the 1890s. It was used to scent perfumes, toilet water, soaps, cold cream, sachets, and tooth powder. According to one druggist quoted in the 1898 edition of the Spatula:

“The latest novelty is a soft, thick, violet-colored flannel which exhales the most delicious perfume. This flannel costs the neat little sum of $15 a yard. Not less than a quarter of a yard will be cut off. The flannel is cut into small strips and sewed into the linings of sleeves, waists and skirts, and into the crowns of hats and of bonnets. The odor from it is perhaps the most exquisitely delicate to be obtained.”

The druggist goes on to report that, in his particular shop, “We sell more violet, fifty times over, than all the other perfumes together.” Most violet scented perfumes and cosmetics sold in shops in the U.S. and the U.K. were of the artificial variety. Perfumes made of natural violet were much more costly—and difficult—to produce. As the Spatula explains:

“Violet perfume may be extracted from the flowers themselves, but one hundred pounds of violets produce only one ounce of the finest extract.” 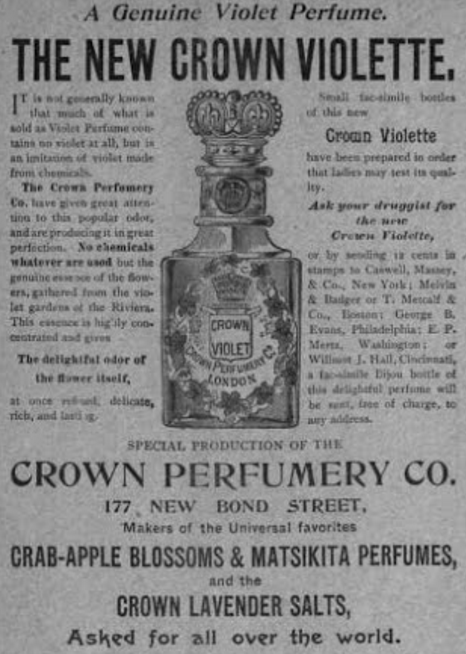 The American Soap Journal and Manufacturing Chemist describes natural violet perfume as being “a delicate, expensive product, which most connoisseurs prefer to any of the artificial combinations.” It had a sweet fragrance which was suitable for women of all ages. It also came in infinite varieties. As the American Soap Journal reports:

The ultra-feminine scent of violets was believed to be particularly appealing to the opposite sex. In an 1895 article on violet perfume published in the American Journal of Pharmacy and the Sciences Supporting Public Health, Henry Kraemer reminds readers of the power of violets, writing:

“The extent of their inﬂuence may be ascertained, possibly, when we recall that the beautiful Countess Eugenie de Montijo draped her gown with violets, ‘caught’ the Emperor Napoleon III and mounted a throne.”

Does any of this provide us with an explanation for why Margaret Gainer pocketed that bottle of violet perfume and refused to give it back? Perhaps, like the Empress Eugenie, she hoped to ensnare a desirable gent. Or perhaps, she merely wanted to smell like a woman of fashion. Was it worth thirty days in prison? I suspect not.

I had to research violet perfume quite a bit when writing my Victorian romance novel, The Lost Letter. It is the preferred fragrance of my heroine, Sylvia Stafford. Now a governess, she can no longer afford violet perfume and, instead, must make do with violet-scented soap. 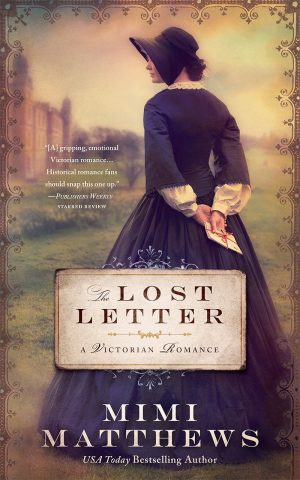 Home  »  Blog  »  The Scent of Violets: Perfume, Cosmetics, and Crime in the Late Victorian Era