A Cure for Melancholy: Victorian Medical Advice on Treating Depression

“Melancholy is a low kind of delirium, with a fever; usually attended with fear, heaviness, and sorrow, without any apparent occasion.”
Beach’s Family Physician, 1861. 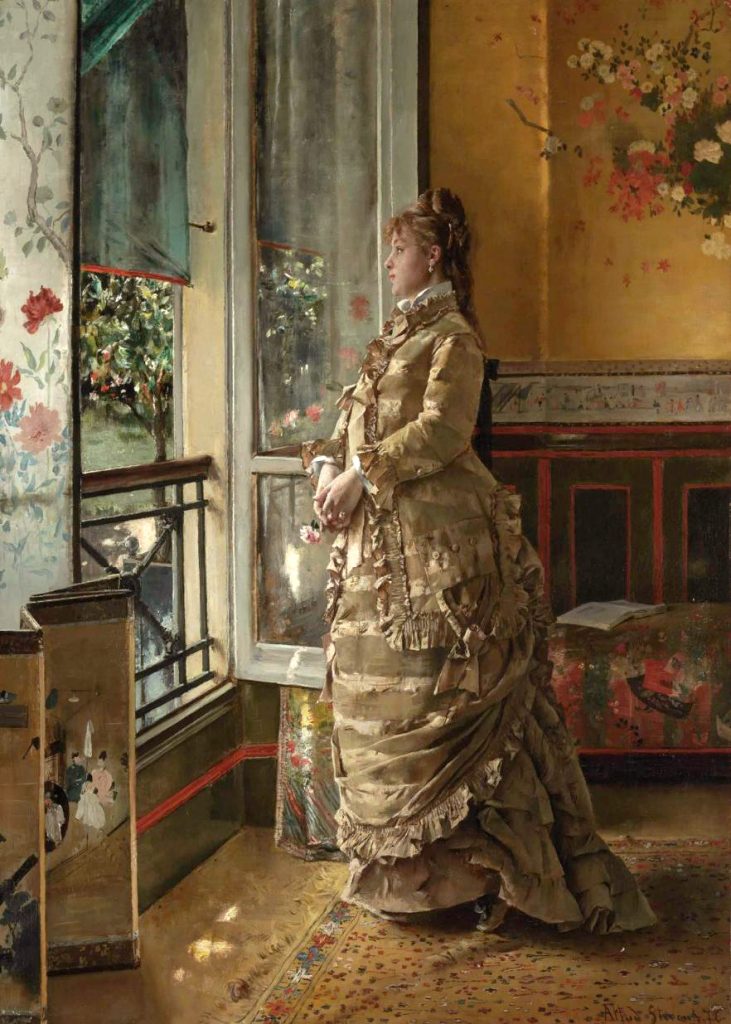 What we recognize today as depression was, in the Victorian era, popularly known as melancholia or melancholy.  Like depression, melancholy ranged in seriousness from mild, temporary bouts of sadness or “low spirits” to longer, more extreme episodes, characterized by insomnia, lack of appetite, and suicidal thoughts.  While symptoms of melancholy were usually easy to recognize, medical opinions often differed on what it was that caused the condition.  As a result, treatment plans for the melancholic patient varied widely.  Below, we look at a few Victorian era medical opinions on the symptoms, causes, and treatments of melancholy.

“A low kind of delirium, with a fever; usually attended with fear, heaviness, and sorrow, without any apparent occasion.”

According to Beach, the patient afflicted with melancholy shunned society and courted solitude, was fearful and low spirited, and indulged in “a certain train of thoughts upon one subject.”  This subject was generally “that which was the cause of his misfortune.”  In an article in the 1850 edition of the People’s Medical Journal, Dr. Thomas Harrison Yeoman seems to agree with this catalogue of symptoms, writing that “the leading characteristics of melancholy are—a love of solitude, gloom, fear, suspicion, and taciturnity.”

Many medical practitioners found it useful to divide melancholy into categories by symptom.  This served to separate the more severe forms of melancholy, such as those accompanied by violent outbursts, mania, or delusions, from the more ordinary forms of melancholy in which the patient was merely reclusive and sad.  In his 1871 book Insanity and its Treatment, Dr. G. Fielding Blandford classifies melancholy as being either acute or subacute.  While Yeoman goes a step further, dividing melancholy into four separate types: 1) Gloomy Melancholy; 2) Restless Melancholy; 3) Mischievous Melancholy; and 4) Self-Complacent Melancholy.  He describes them as follows: 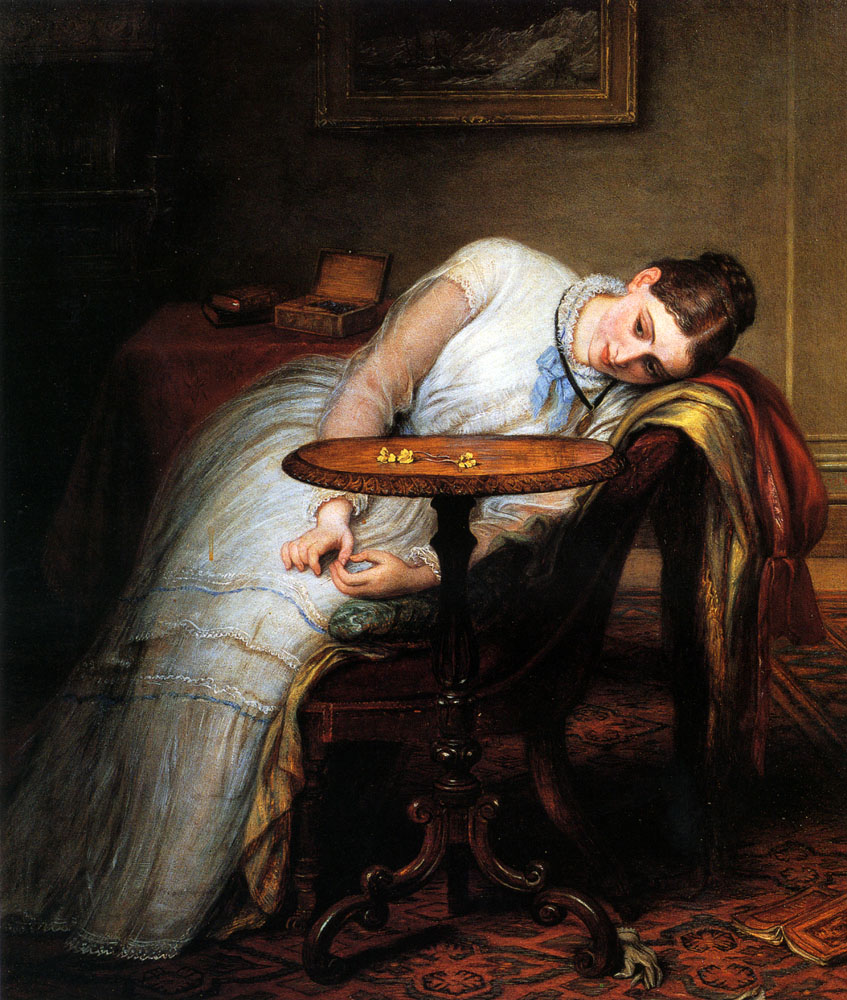 Melancholy was often accompanied by physical symptoms.  Much of these were a direct result of poor diet, lack of activity, and too much time spent closed up indoors.  As Beach explains:

“The face is generally pale; the urine small in quantity, and water; the patient is commonly costive, and the stomach affected with wind; and in some cases so miserable are the feelings, that the unfortunate wretch seeks every opportunity of putting an end to them, by terminating his existence.”

Not all patients were melancholy for the same reasons.  Much like depression today, melancholy could result from a particular situation, such as a death in the family or a professional, financial, or romantic disappointment.  Melancholy could also result from physical illness.  According to Beach, it could be brought on by “dyspepsia, suppressed evacuations, intemperance, and injuries of the cranium.”  In addition, as Beach explains:

“Sometimes it is occasioned by a sedentary life and solitude, and by acute fevers or other diseases.  It is sometimes the effect of excessive venery; and is frequently produced by gloomy and fanatical notions of religion. 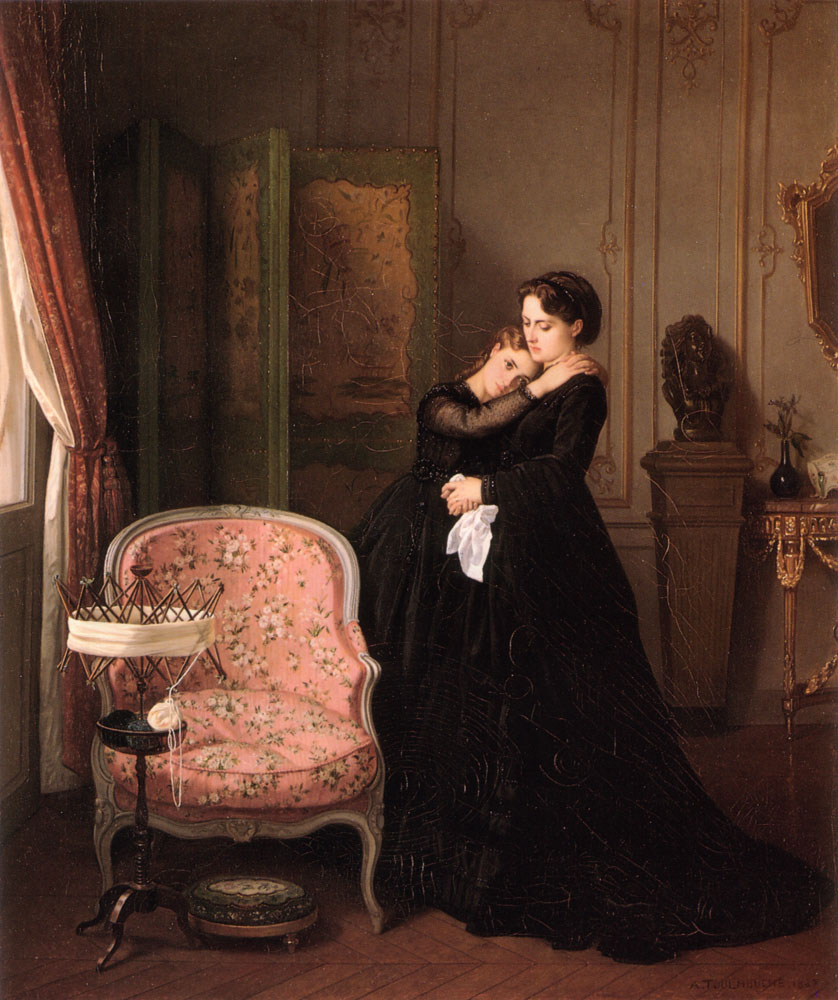 Melancholy could also set in for what appeared to be no reason at all.  Beach states that this sort of melancholy was often the result of “an hereditary disposition” or a “melancholic temperament.”  While in the 1879 book Clinical Medicine, Dr. Austin Flint declares that “when not attributable to an adequate cause, such as the death of relatives or friends, loss of property, position, or character” and when not a symptom of dyspepsia, alcoholism, or other recognizable illness, melancholy should be regarded as “a neuropathic affection” or, in short, a diseased mind.

Unfortunately for Victorian doctors and their melancholy patients, there were no antidepressant drugs available in the nineteenth century.  Instead, doctors generally treated melancholy by recommending specialized diets and regimens of rest and relaxation.  Beach took a more modern approach, declaring that “in the treatment of melancholy, attention must be directed to the mind as well as the body.”  To this end, he advised that the patient should be

“…amused with a variety of scenery; and take freely of exercise in the open air, such as riding, walking, gardening, farming, &c.  He should peruse interesting books, and converse with cheerful friends; and above all, be located amid pleasant scenery, where he can enjoy a water prospect, a country air, and country diet.”

Beach also recommended the shower bath.  He advised his patients to shower often and, afterward, to “rub the whole body well with coarse flannel.”  This was a much less traumatic option than the water therapy offered at some asylums, wherein patients were plunged into cold baths or, as in one case related by Dr. John Bell in his 1859 book A Treatise on Baths, “bound in a cart, stripped, and blindfolded” and then subjected to “a great Fall of Water” from twenty feet above. 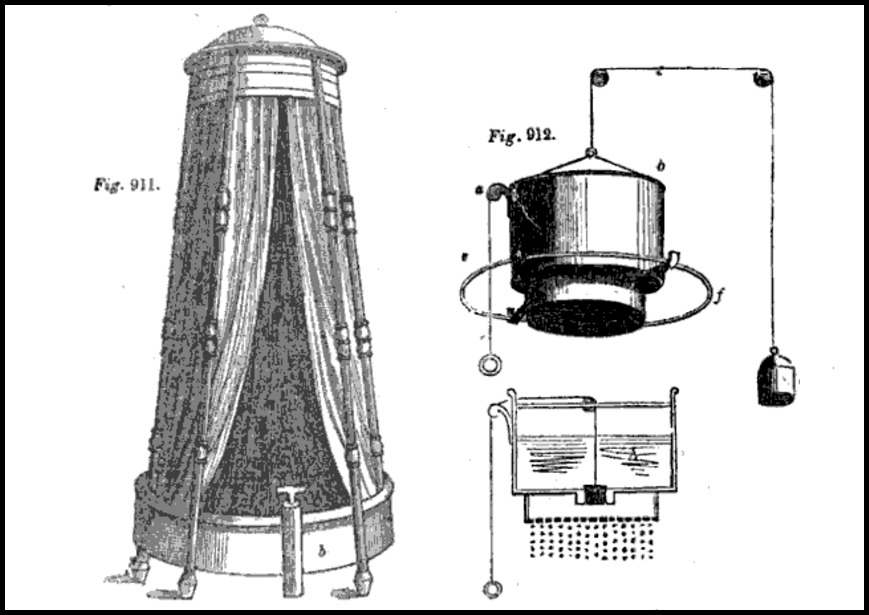 Illustration of a Shower Bath as Usually Sold by Ironmongers.
(Encyclopaedia of Domestic Economy, 1855.)

Some Victorian doctors went further with their treatments, advising their melancholy patients to drink alcohol, to take morphia, or even (if they were single) to get married and start a family.  For example, Blandford recommended a diet which featured alcohol at almost every meal, followed by a dose of chloral or morphia at night to help the melancholic patient sleep.  He writes:

“Before getting out of bed in the morning, rum and milk, or egg and sherry; breakfast of meat, eggs, and café au lait, or cocoa; beef-tea, with a glass of port, at eleven o’clock; and a good dinner or lunch at two, with a couple of glasses of sherry; at four, some more beef-tea, or equivalent; at seven, dinner or supper, with stout or port wine; and at bed-time, stout or ale, with the chloral or morphia.”

Blandford claims that this diet was so successful for the treatment of melancholy that, once the patient was well, if he ever deviated from the diet, he “felt at once a return of the depression and delusions, which vanished again after the reception of food.”

Unlike Blandford, Flint believed that alcohol and opiates should never be given as treatment for melancholy.  He claimed that the treatment of melancholy was “chiefly mental” and that only by engaging the “intellectual and moral faculties” could the patient begin to recover.  In addition to treating one’s mind, he also recommended “invigoration of the body,” stating:

“Hygienic measures are often of much benefit.  Abundant exercise in the open air, with agreeable mental occupations, as in hunting, fishing, boating, etc., and travelling, are not infrequently curative.” 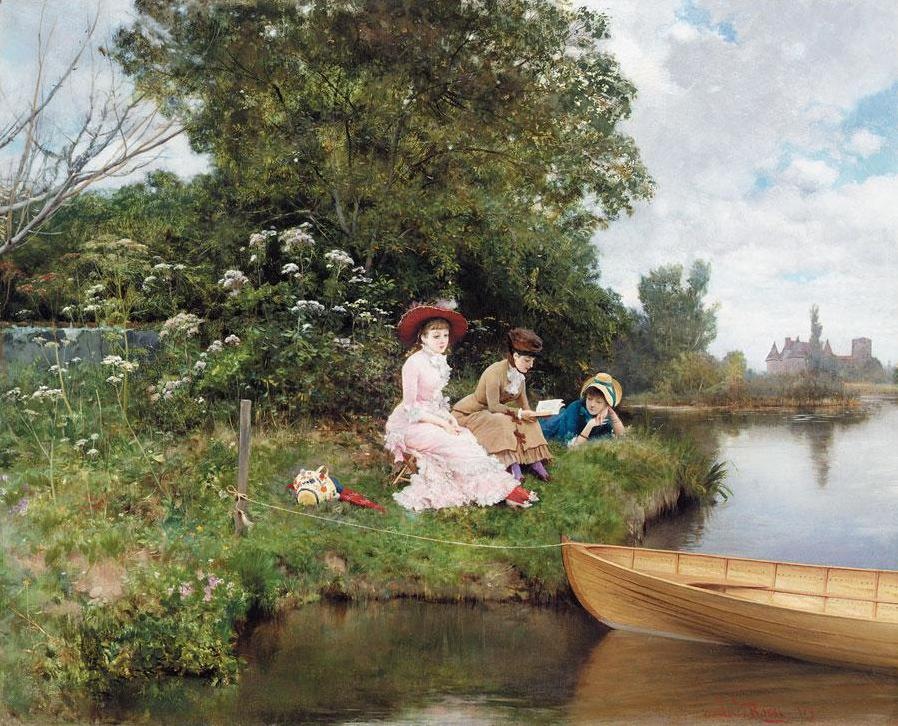 In some cases, Victorian era doctors advised that patients suffering from melancholy be committed to an asylum.  This was mainly to prevent the patient from harming himself since, as Blandford states, “every patient of this kind is to be looked upon as suicidal.”  While wealthier patients could afford to hire attendants to watch over them at home, the poor patient in need of supervision had little choice but to turn to an asylum.  As Blandford advises:

“If a poor man, there is nothing for it but to send him to an asylum.  For he must not be left for a moment where he can do himself harm, or make his escape.”

According to Flint, men were “more subject to melancholy than women.”  He gives little reason for this, only going so far as to concede that melancholy was “not uncommon” in women “at the time of the cessation of the menstrual function.”  Addressing menopause related melancholy, he writes:

“The author has been led to attribute the causation more to a moral than a physical influence.  This event in the life of women has a twofold significance.  It is evidence of advancing years, and it denotes incapacity for bearing children.  Both are often not without considerable moral influence.  Even if a woman be unmarried, and has no expectation of marriage, or, if married, there be no desire for children, the loss of the capability of impregnation in its effect upon the mind, is not unlike the idea of impotency in men who do not expect ever to exercise the sexual function.” 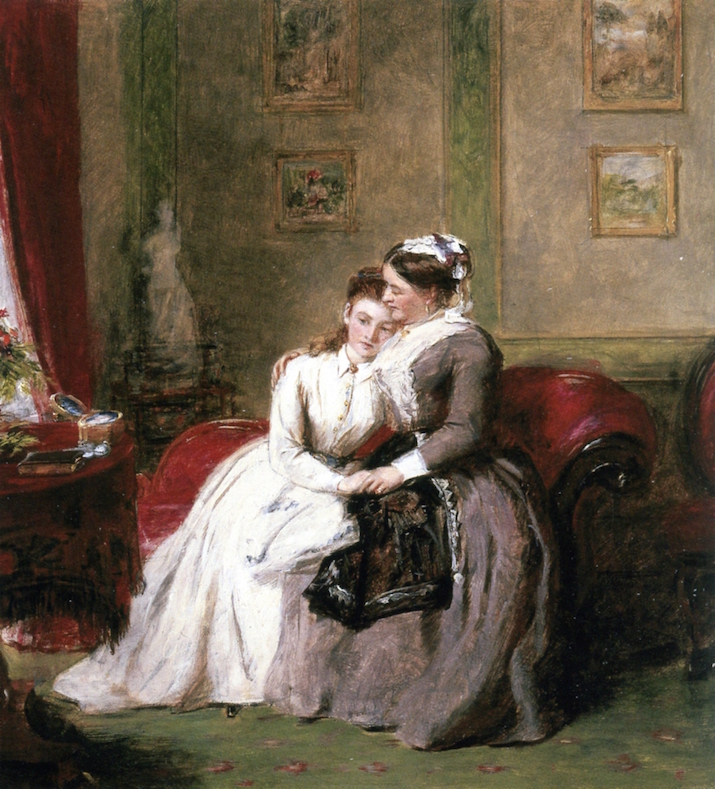 There is much more to be said about the Victorian era diagnosis and treatment of melancholia.  I could easily have gone on to discuss the doctors who specialized in mental diseases (called “alienists”) or the advent of psychiatry and psychoanalysis.  I could have mentioned the contributions of Henry Maudsley, Josef Breuer, and Sigmund Freud.  However, in an article of this size, I thought it better to focus on the basic knowledge and treatments available at the time.  I hope this has given you some insight into how Victorian doctors addressed this unfortunate—and all too common—condition.

Maudsley, Henry.  The Physiology and Pathology of the Mind.  New York: D. Appleton and Company, 1872.