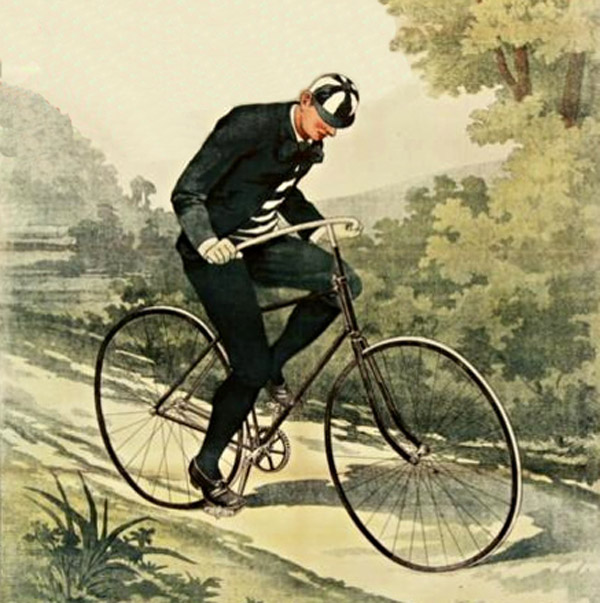 In September of 1896, British newspapers reported the remarkable use of a bicycle in a New Jersey murder case.  The case involved two men who had both emigrated to America from London in the early 1890s.  One of these men was a farmer named Mr. Haggett who settled down with his family on a farm near Somerville.  The other man was a fellow named Mr. Clossen who Haggett employed as a farm laborer.  Sometime in 1896, Haggett caught Clossen stealing.  In consequence, he not only fired him from his job, but also refused to pay him the thirty dollars in wages that Clossen believed he was owed.

Angered over the loss of his job and the withholding of his wages, Clossen mounted his bicycle and pedaled out to Haggett’s farm. He knocked on the front door and asked to see Haggett. When Haggett came to the door, Clossen pulled out a revolver and fired three shots, killing Haggett instantly. According to the 5 September 1896 edition of the Blackburn Standard:

“The murderer then jumped on his bicycle and fled.” 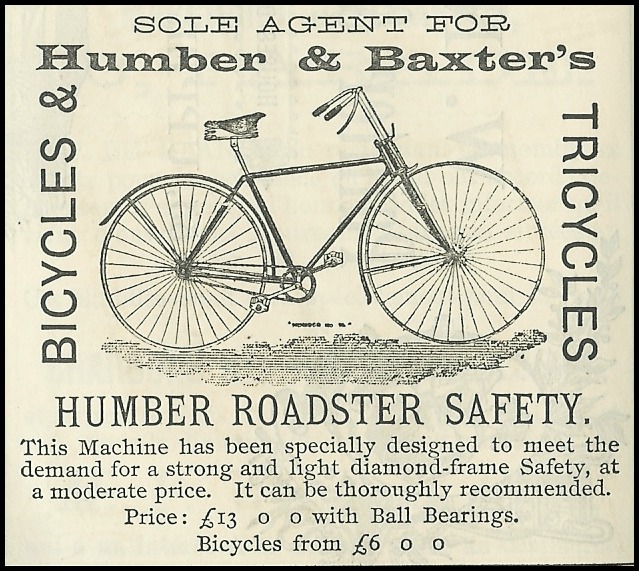 Haggett’s wife was at home and, when she saw what Clossen had done to her husband, she screamed out to some carpenters who were building a house nearby.  The carpenters had pedaled to work on their bicycles and, at Mrs. Haggett’s urging, they hopped back on their bikes and sped off in pursuit of Clossen.  Some men on horseback also joined in the chase, but the bicycles quickly outdistanced them.

Once apprised of the crime, the local Sheriff made straight for his own bicycle.  He is reported to have “mounted his machine, and tore after the murderer.”  By this time, Clossen had over a mile head start on his pursuers.  He pedaled like mad and, as the Blackburn Standard reports:

“The chase lasted for ten miles, and took the party over two high hills before [Sheriff] Moore and the carpenters overtook the fugitive.”

Clossen was arrested and returned to Somerville in the back of a wagon.  There, he was met by a veritable mob of angry farmers who were ready to lynch him for the murder of Haggett.  According to newspaper reports, the sheriff had to “threaten to shoot in order to save the prisoner from them.” 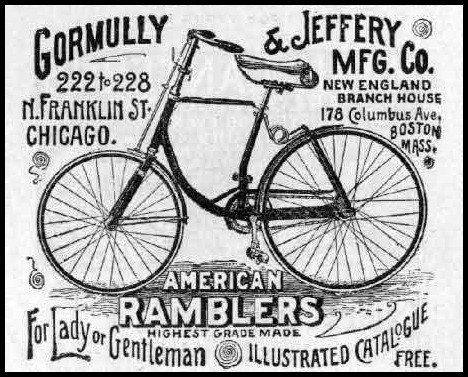 Clossen was not the only Victorian era criminal to have attempted an escape by bicycle.  Bicycles were employed by all sorts of late nineteenth century fugitives—from mischief-makers to murderers—who wished to make a speedy getaway.  In 1896, for example, a warrant was issued for a cashier from the East and West Railway Company who had been embezzling funds from his employers. When the police arrived to arrest him, the cashier fled on his bicycle. The police followed in hot pursuit. When they at last overtook him, the Worcestershire Chronicle reports that the cashier “blew out his brains with a revolver.”

A woman who used a bicycle to escape from the Bethel Lunatic Asylum in 1899 enjoyed greater success than the doomed railway cashier.  The Nottinghamshire Guardian reports that the woman, named Mrs. Attree, had been declared insane after “attempting to kill her infant child by throwing it out of the window of a railway carriage.”  Since that time, she had been detained in the asylum. In September of 1899, she somehow escaped from the premises and, after obtaining a bicycle in a nearby village, she pedaled away and was seen no more. 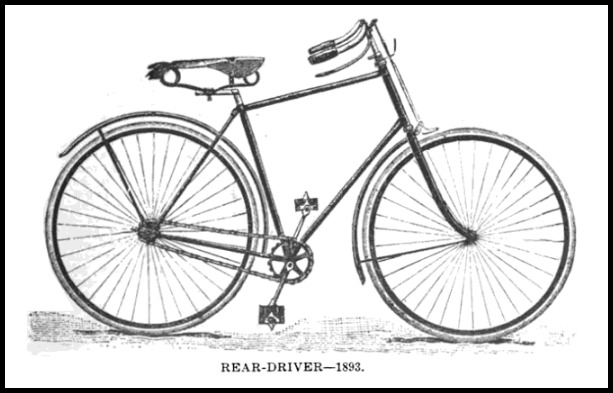 Illustration of a Rear-Driver Bicycle.
The Modern Bicycle, 1896.

Police did not regularly use bicycles themselves until the late nineteenth century.  Before then, bicycles were too heavy and unwieldy to be practical. However, by the 1880s, the safety bicycle had been invented.  Made with two wheels of identical size, the safety bicycle had pneumatic tires, a chain-driven rear wheel, and what is known as a “diamond frame.”  Safety bicycles were much easier for policeman to manage and, as the century came to a close, more and more cities throughout the United States and England were assigning bicycles to their police officers.

This did not mean that criminals and policemen were now evenly matched in a high speed bicycle chase.  Some Victorians went extraordinarily fast on their bicycles, often to the point of danger for all those around them.  These daring folks were popularly known as “scorchers.” I close this article with an 1897 poem from Lyra Cyclus; Or, The Bards and the Bicycle about a bicycle policemen’s hapless pursuit of a scorcher.

THE COPPER AND THE SCORCHER

He was a mounted copper,
Upon an iron steed,
And was laying for the scorcher,
Who rode at lawless speed;
When whizzing ’round the corner,
At a breakneck, lightning pace,
Appeared a reckless rider,
Whereupon the cop gave chase.

“I say there!” cried the bluecoat,
As he humped himself about,
“You’re arrested for fast riding.”
When the scorcher heard the shout
He looked o’er his shoulder,
And he didn’t do a thing
But pedal all the harder
And make the welkin ring.

“I like that,” said the “finest,”
As through the thoroughfare
He started for his victim;
And the crowd that gathered there
Cheered the racer, jeered the copper
And wagered ten to one
On the scorcher as he sped along
On that exciting run.

In and out among the horses
And wagons on the street
They dodged about most artfully,
Doing many a dangerous feat;
But the bluecoat was outdistanced,
He set too slow a pace,
And his anger gave expression
In the wrath upon his face.

At last grown weak and weary,
The copper swore he’d shoot.
And reached back for his pistol,
But the crowd cried, “Don’t, you brute!”
But he aimed it at the scorcher,
If he didn’t, I’m a liar;
“Bang!” and the scorcher tumbled,
For the cop had pierced his tire.
~ 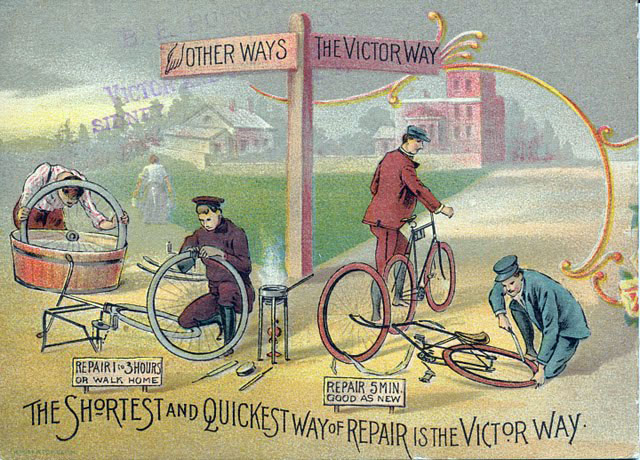 Advertisement for the Victor Bicycle, 1894.

Redmond, Edmond. Lyra Cyclus; Or, The Bards and the Bicycle. Rochester, 1897.