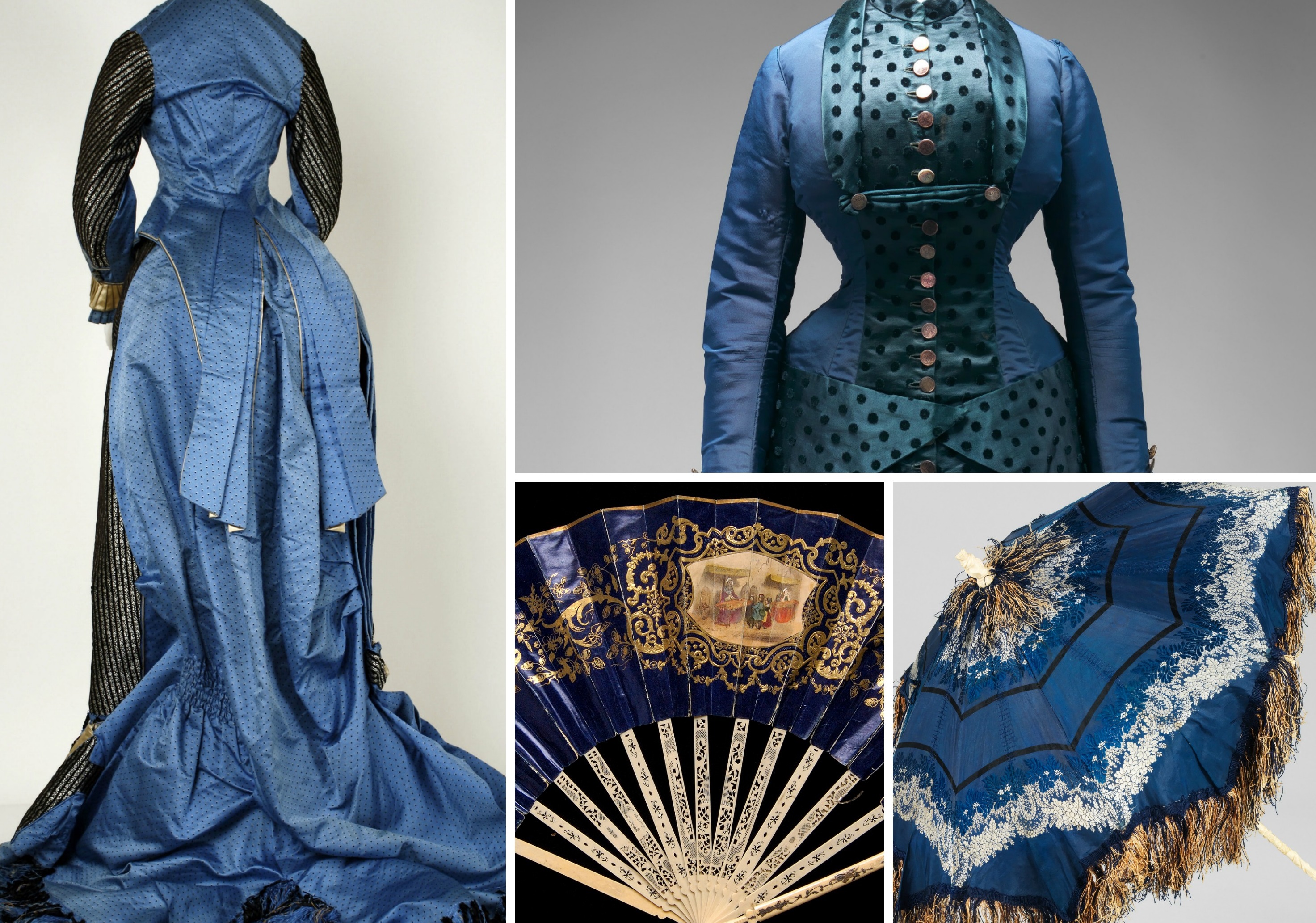 During the nineteenth century, blue was considered a versatile color, as suitable for elegant evening gowns and demure day dresses as it was for fashionable bonnets, slippers, and parasols. In shades ranging from the palest cerulean blue to the deepest navy, it adorned women of every age and every station, harmonizing with a wide range of hair colors and complexions. In today’s article, we look at some of the loveliest examples of the color blue in Victorian fashion.

In his 1870 book Color in Dress, author George Audsley describes blue as “a cold and retiring color…symbolical of divinity, intelligence, sincerity, and tenderness.” It could be worn in any season and, in its deepest and richest shades, was thought to be particularly flattering to ruddy blondes (i.e. those which Audsley describes as having “dark blue or brown eyes and brown hair”). 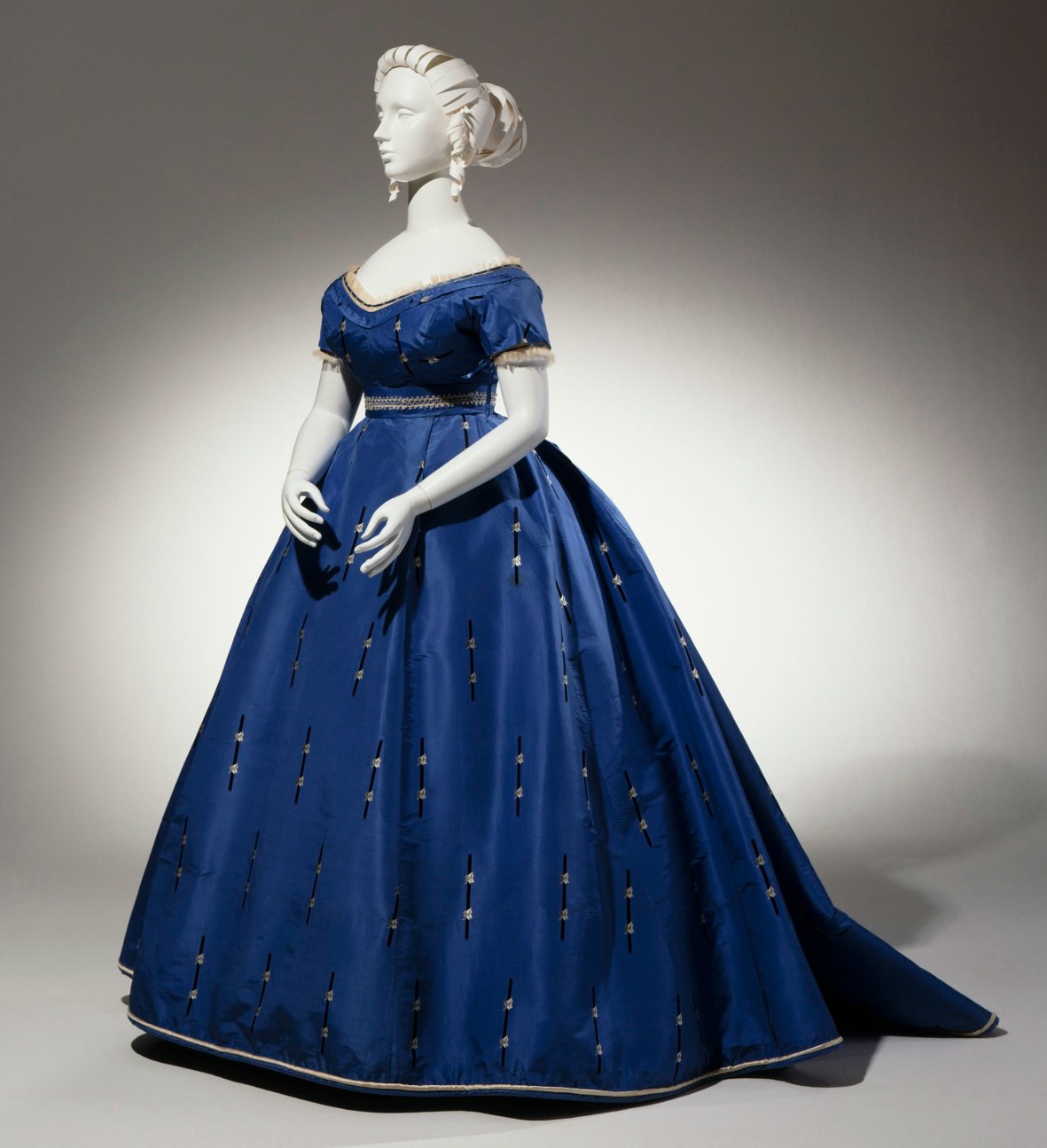 For fair blondes, Audsley advises using lighter shades of blue such as sky blue or turquoise. The reasoning behind this was that light and medium blue were “the perfect contrast of orange,” thus helping to emphasize the “very pleasing” hints of gold and orange in a fair blonde’s hair and complexion. In fact, in her 1872 book Hints on Dress, author Ethel Gale claims that, “of the primitive colors,” these lighter shades of blue were the only ones that a fair blonde could wear—at least, up until the age of fifty, at which point Gale directs the fair blonde to stick to blacks and whites. 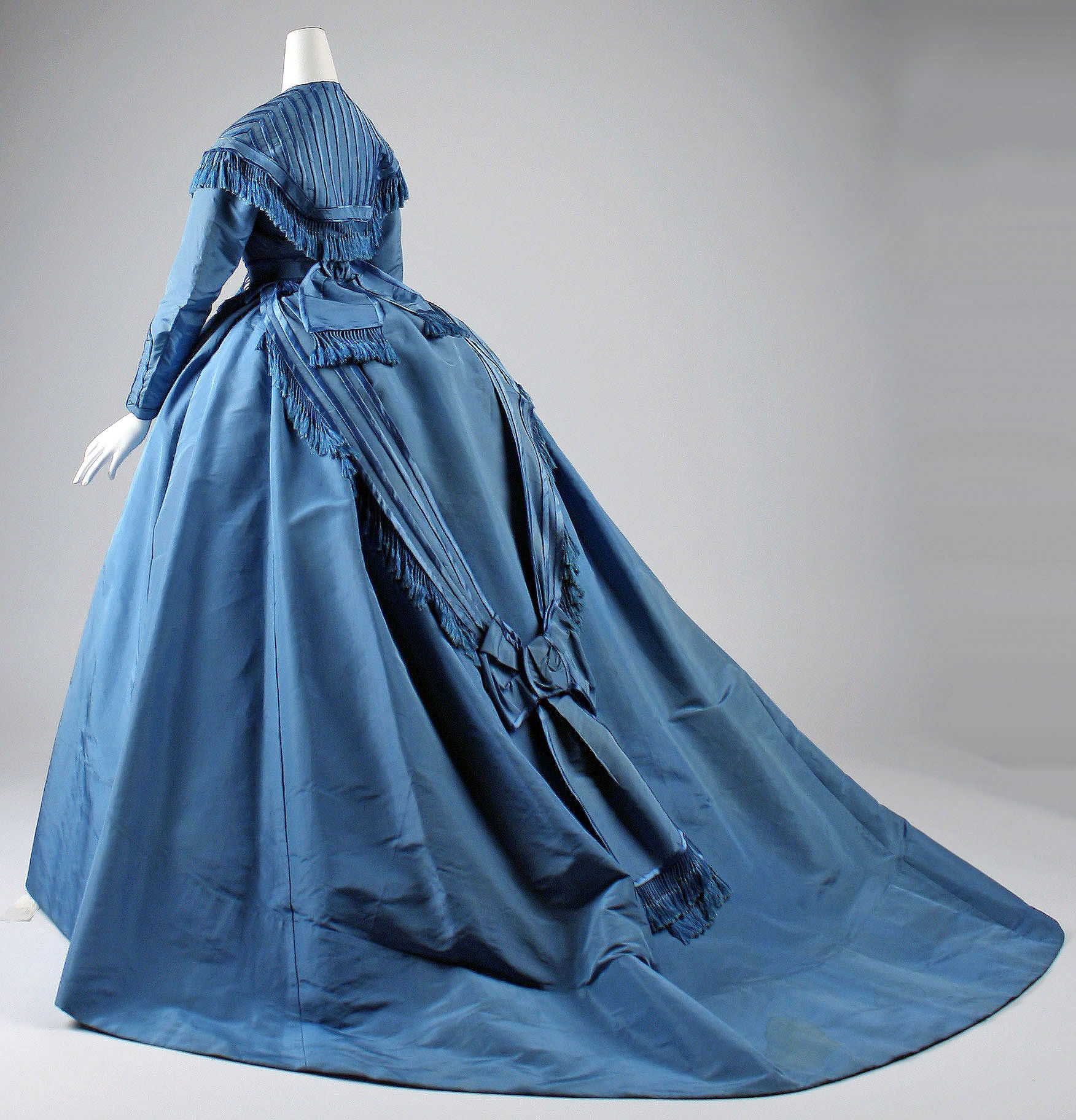 Victorian era opinions differed on whether blue was a flattering color for those with dark brown or black hair. An 1855 edition of Peterson’s Magazine declares that the color blue was completely unsuitable for brunettes. While Gale states that, for vivid brunettes (i.e. those with warm complexions and dark brown or black hair), a “bright and decided” shade of blue was always flattering. 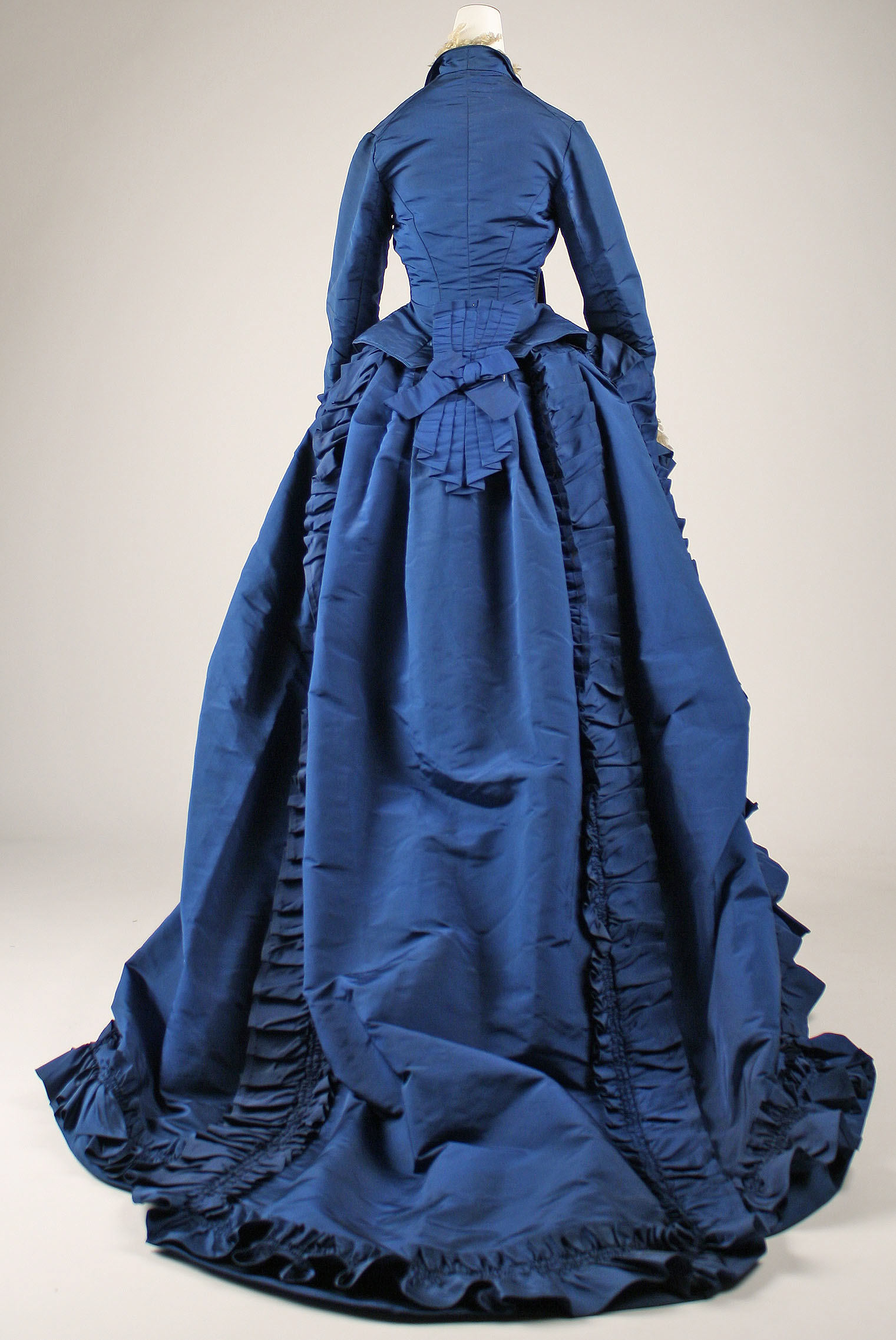 Audsley appears to concur with Gale’s opinion. He directs pale brunettes (i.e. those with fair complexions and dark brown hair) toward the deepest, darkest shades of blue, advising that the nearer the shade was to black, the more suitable it became to a pale brunette’s complexion.

For ladies with red hair, an 1858 edition of Godey’s Lady’s Book reports that “almost all shades of blue are becoming, especially ‘mazarine blue,’ for morning, and a somewhat lighter shade for evening dress.” Mazarine blue is a very deep, rich blue, almost purple in appearance. 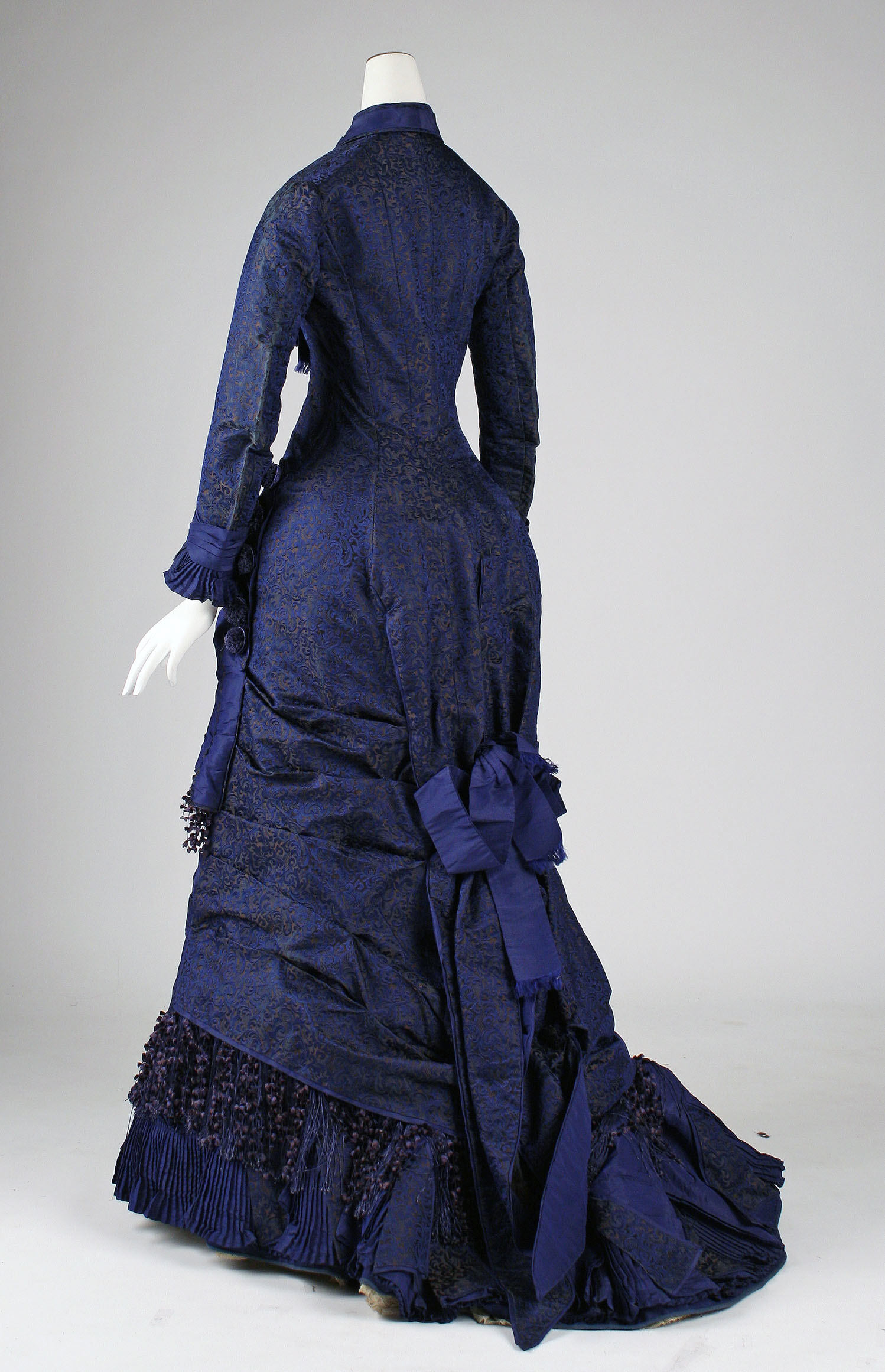 Shades of blue could be worn at any time of day. However, for evening wear, both light and dark blues tended to lose their brilliancy by gaslight. For this reason, Audsley recommends that light blue be combined with white for evening dresses in order to preserve its “proper value” and hue. 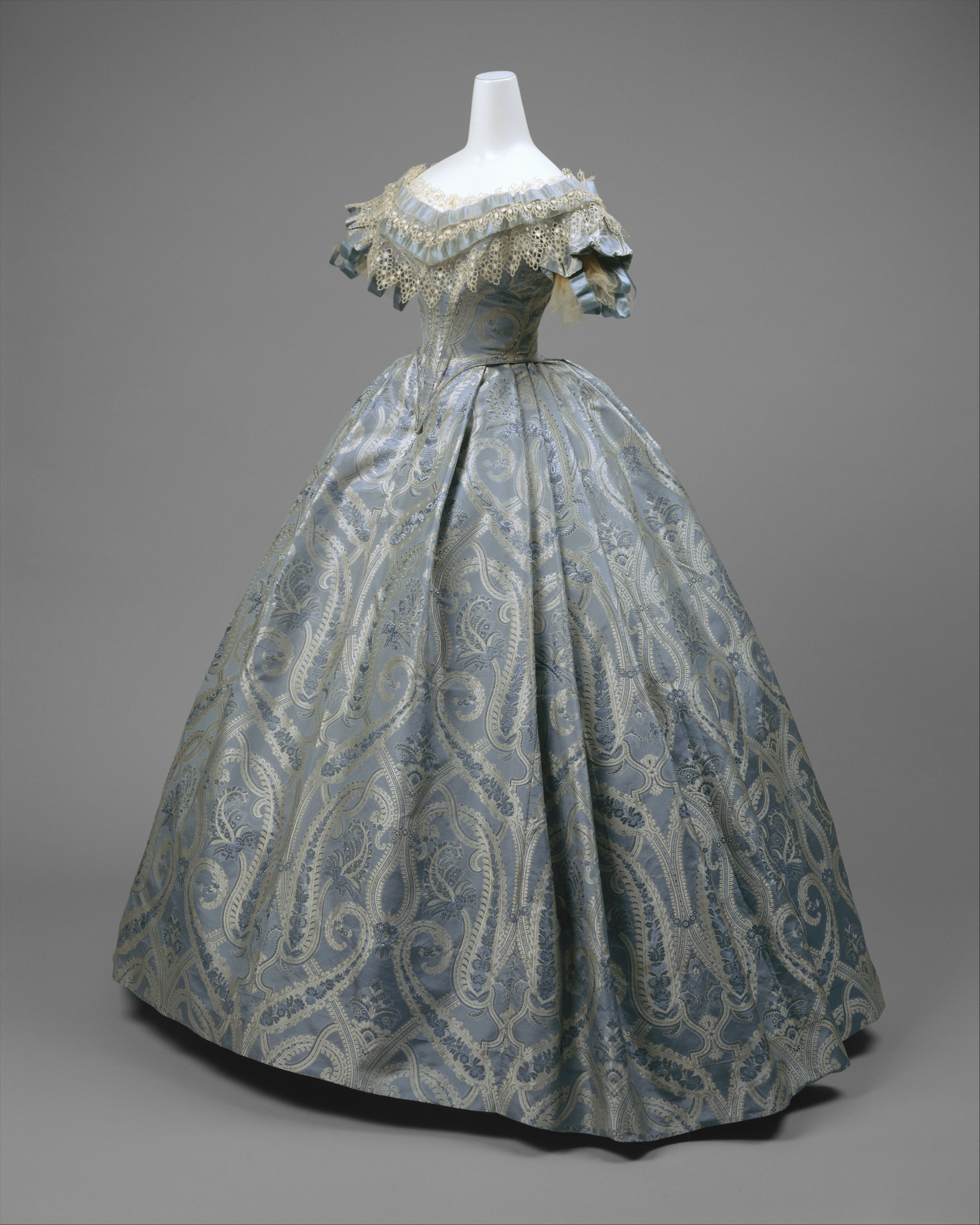 To combat the negative effects of gaslight, evening dresses of darker blue could also be combined with white or another light shade, such as ivory or cream. 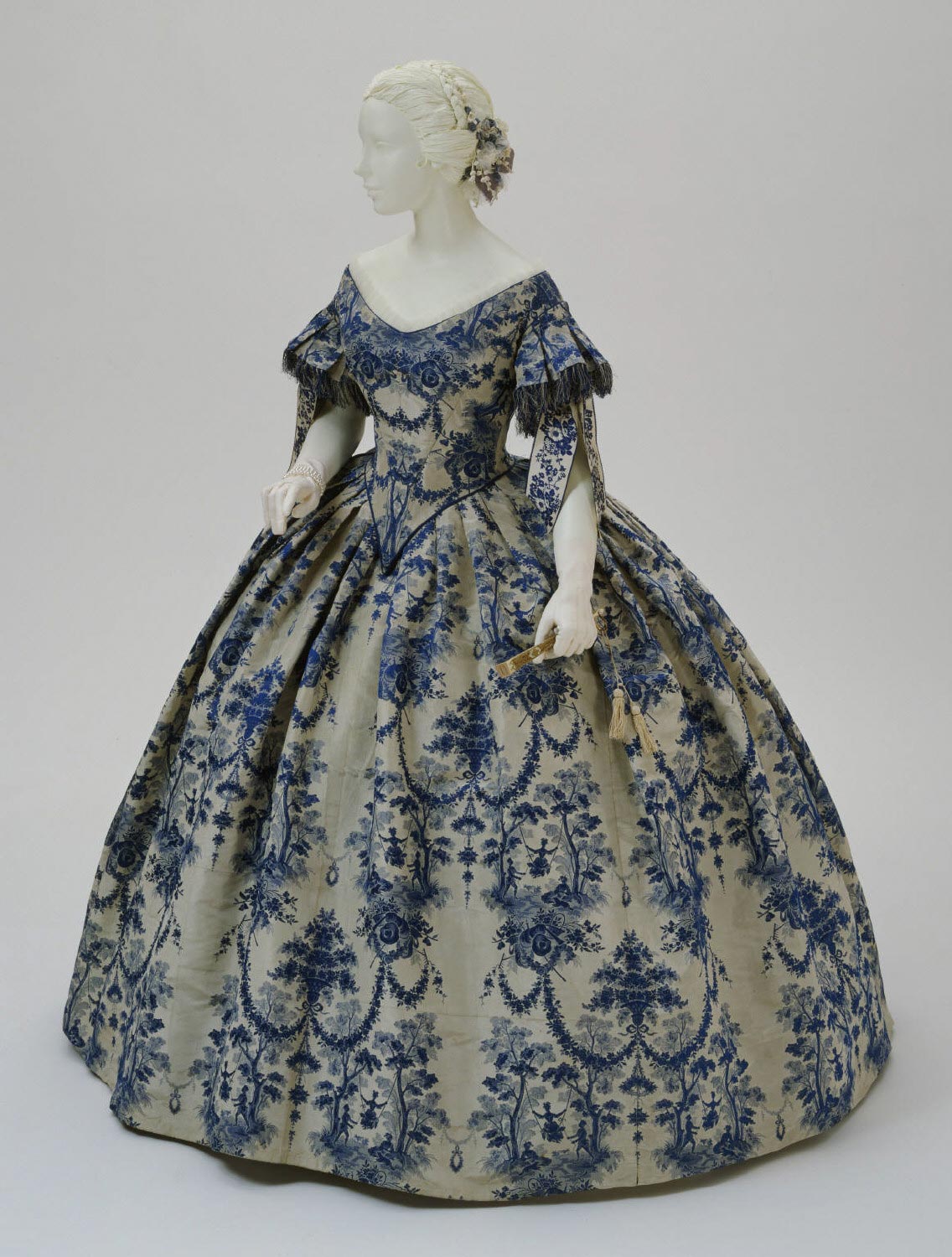 Certain shades were believed to harmonize well with blue. These shades included white, gray, orange, gold, and chocolate. According to Audsley, orange and blue were in “perfect harmony” and blue and gold were in “rich harmony.” 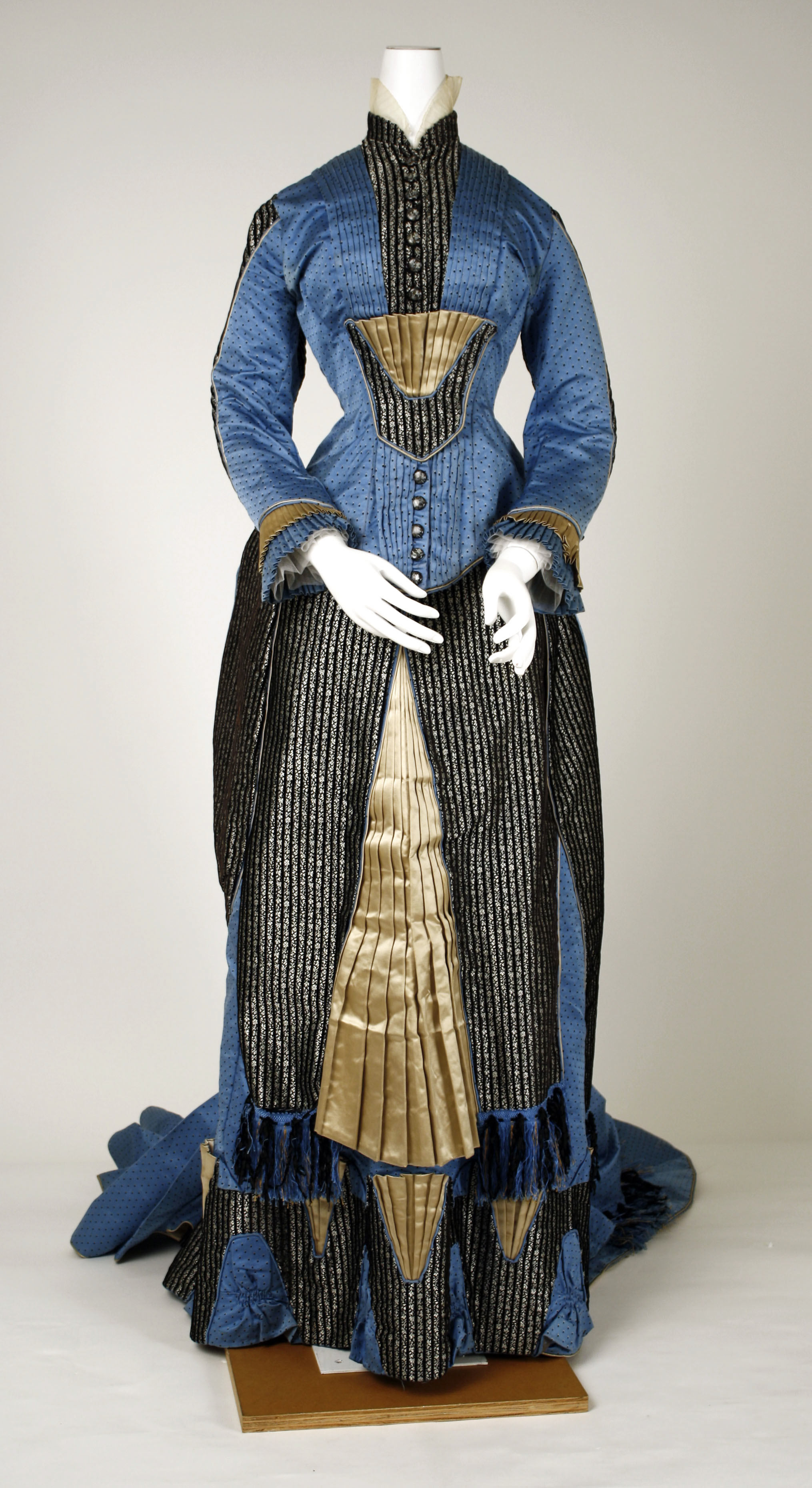 Blue dresses were sometimes accented with a contrasting color. When that contrast color was of a “similar power,” Audsley states that the two would “mutually intensify each other’s brilliancy.” 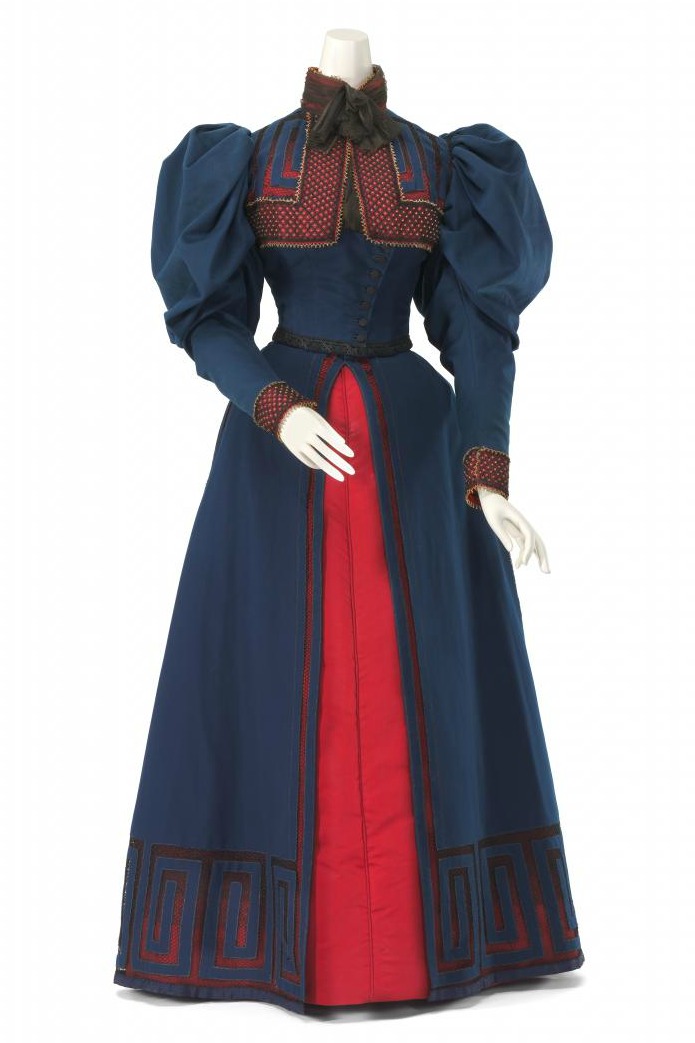 1895 House of Worth Day Dress.
(National Gallery of Victoria)

Some Victorian dresses were made of two or three different shades of blue. This could be quite striking and was a very popular combination throughout the Victorian era, both in day and evening dresses. 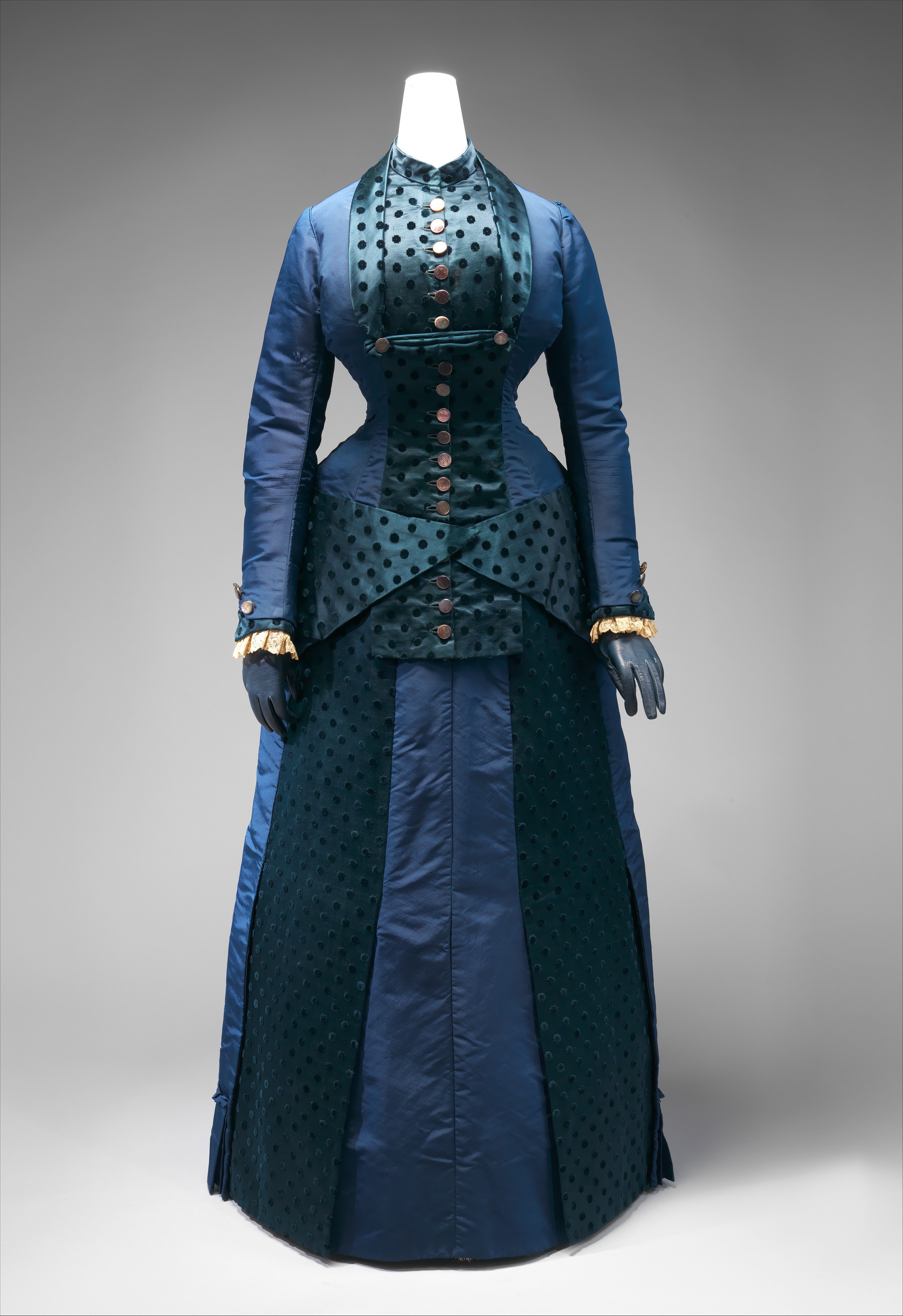 Shades of blue can also be seen in Victorian dresses made of patterned fabric such as plaids or floral prints. In these cases, blue often acts as the base color. 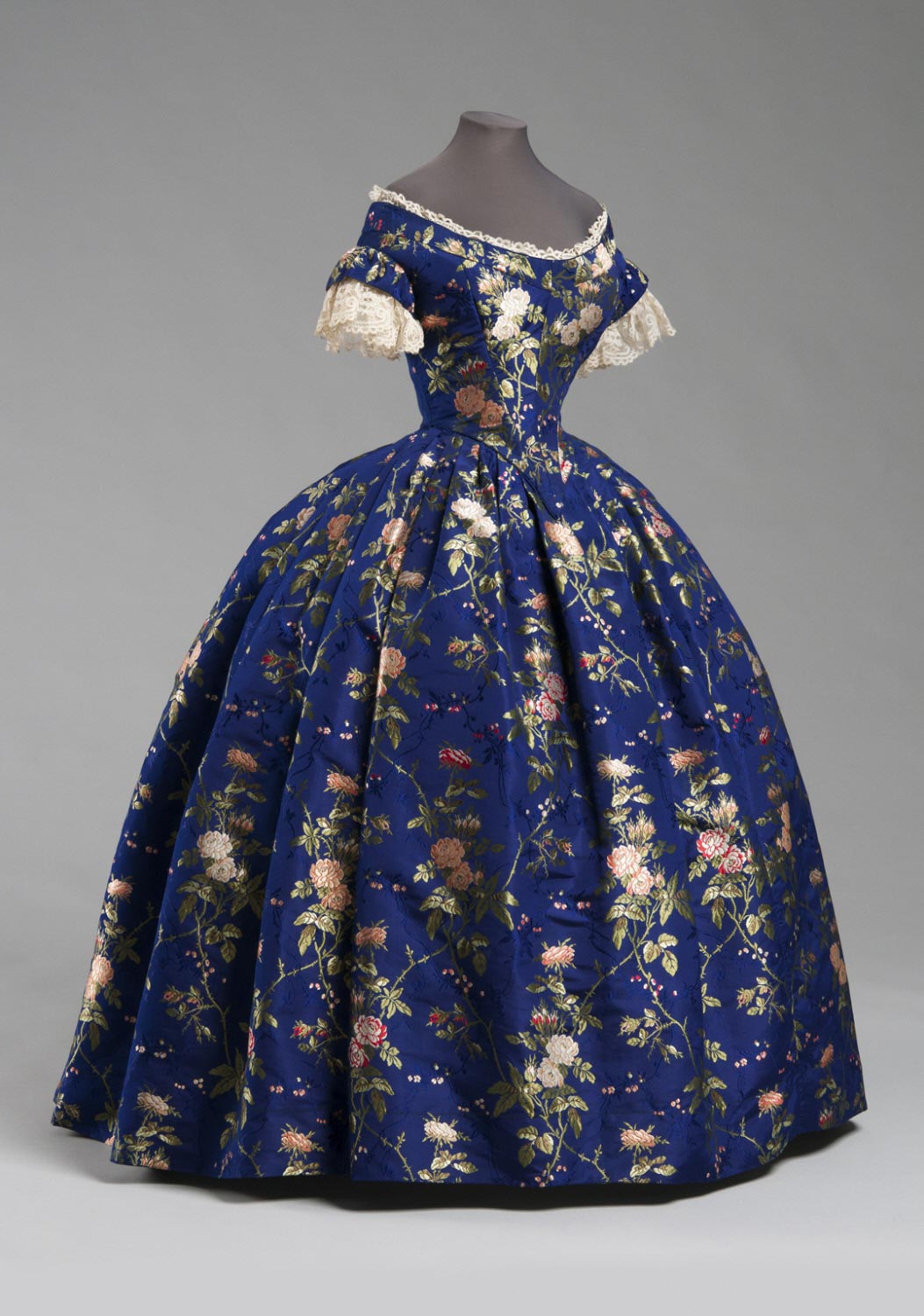 Blue plaid dresses were especially fashionable in the 1850s. Generally more subdued than red or purple plaids, they could be accessorized with blue parasols, bonnets, or gloves. 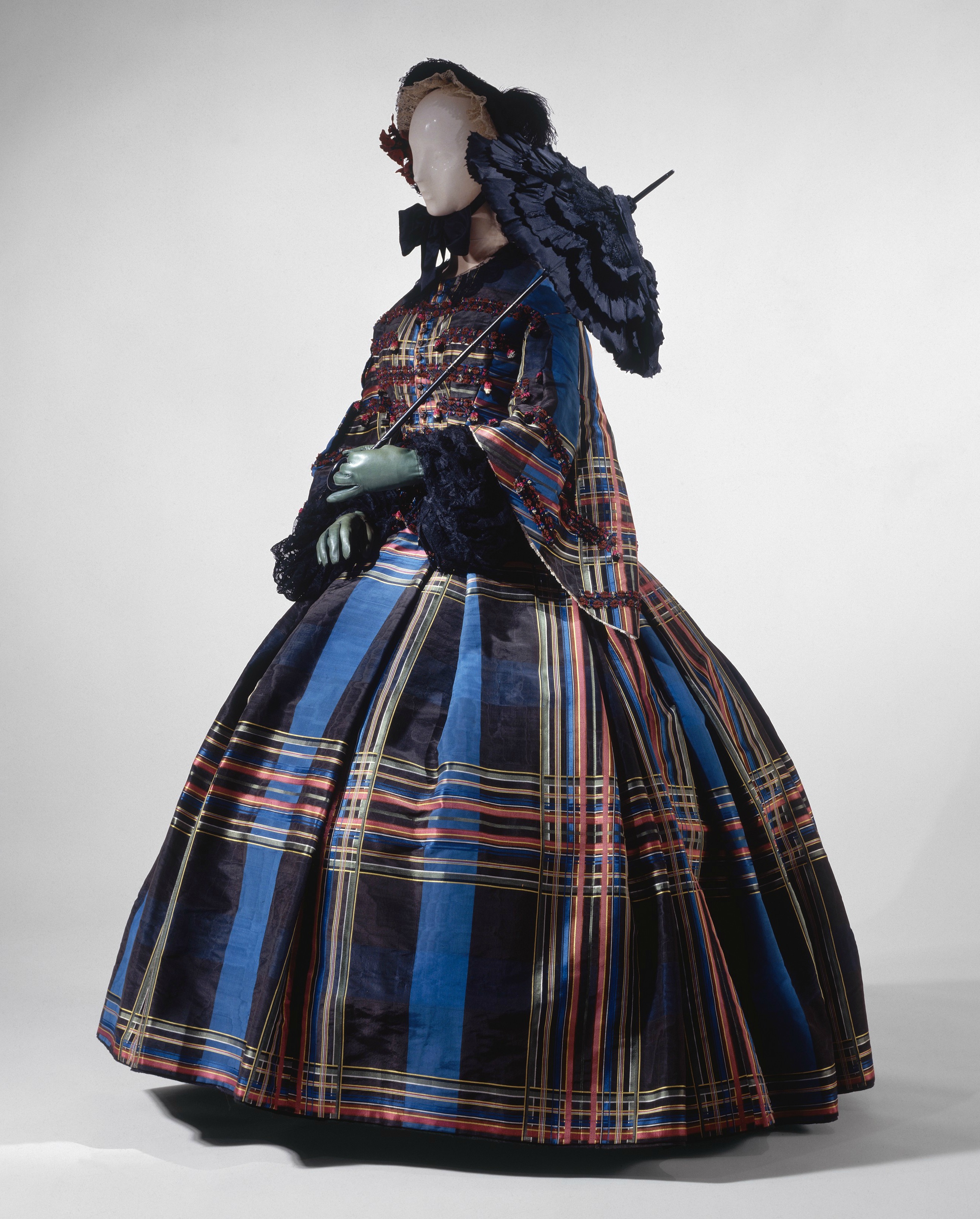 By the late nineteenth century, colorful boots and slippers were all the rage. They could be found in all shades of blue, from the palest to the darkest. For day wear, light blue was well represented, as illustrated by the silk shoes below. 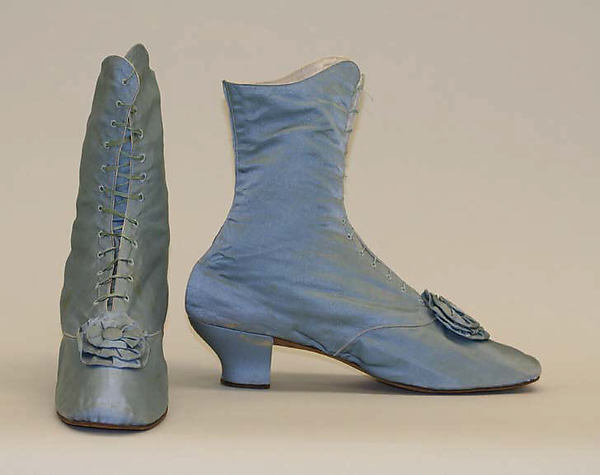 For evening wear, Victorian ladies frequently donned brightly colored slippers or pumps with their gowns. These often featured decorative ribbon, glass beadwork, or embroidery. However, when the color was as vivid as that of the 1885 evening slippers below, no additional embellishment was necessary. 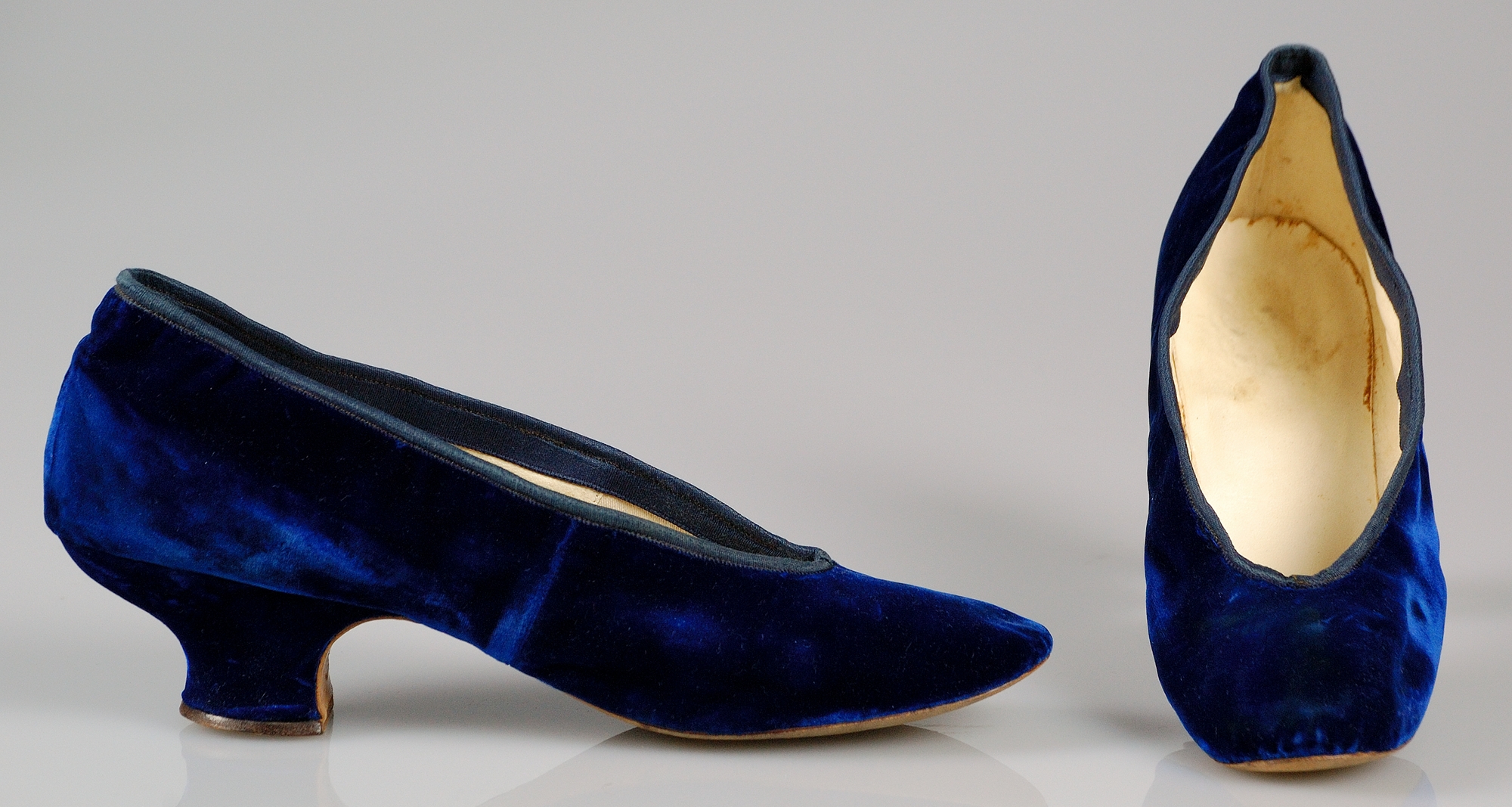 Blue ribbons and flowers were popular trimmings for ladies’ hats and bonnets. Depending on the shade, these bonnets could look quite elegant and sophisticated, even when they were made of straw. 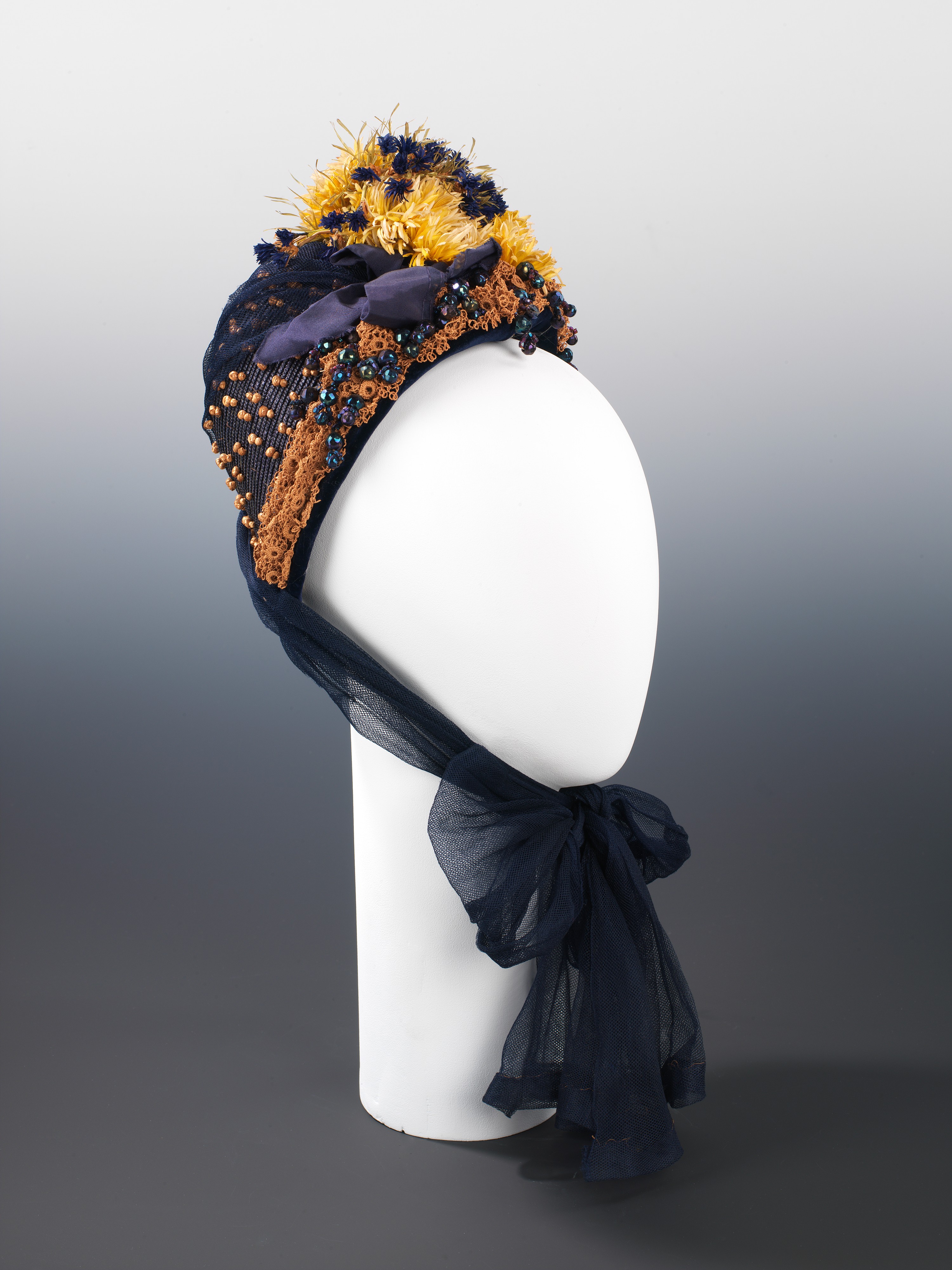 Bonnets of blue silk and velvet were also very fashionable. These were often combined with blue ribbons or dyed blue ostrich feathers. 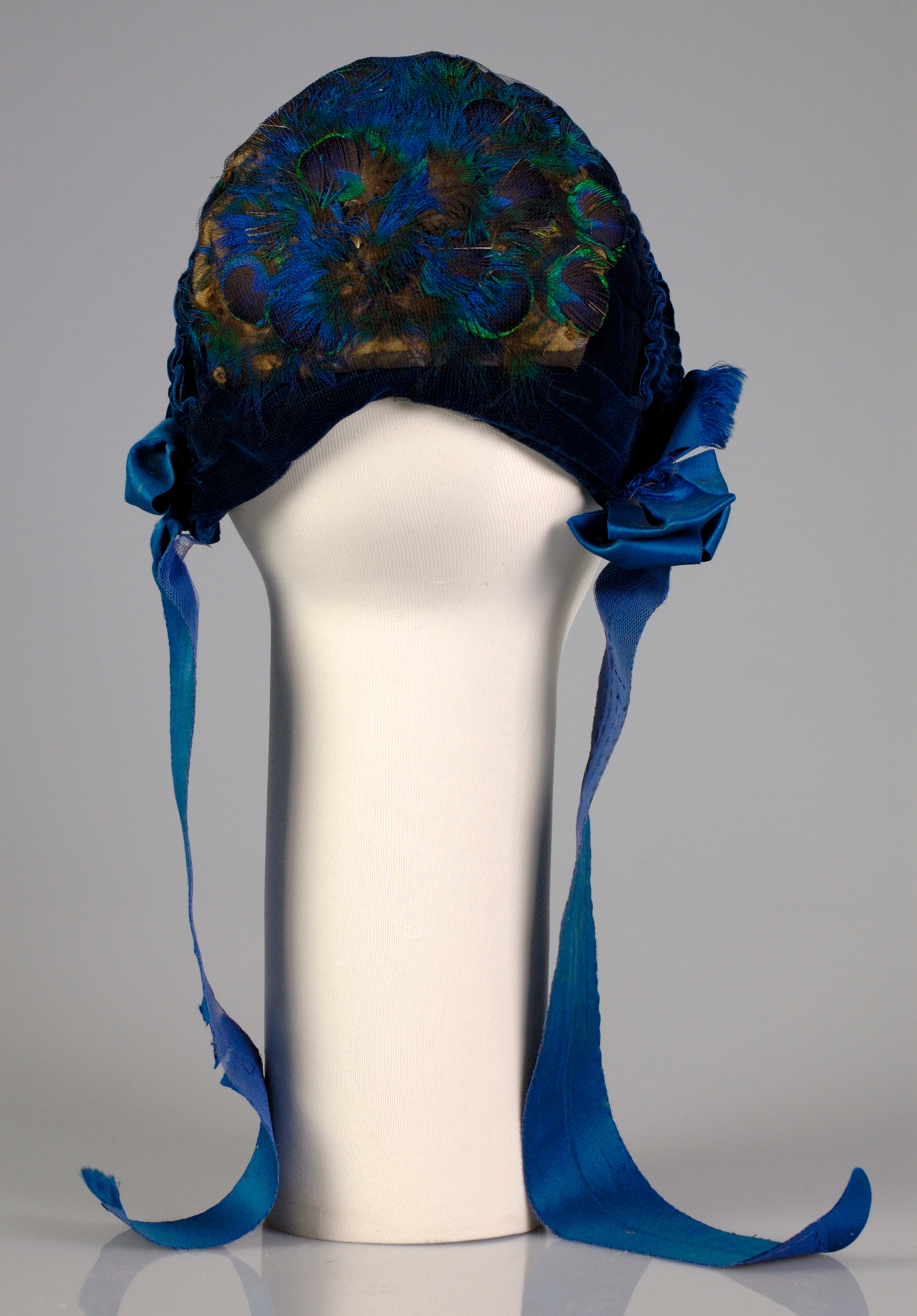 Blue parasols were another fashionable Victorian accessory. They were generally made of silk and came in a range of shades, including pale blue, dark blue, and delicate blue and white prints. 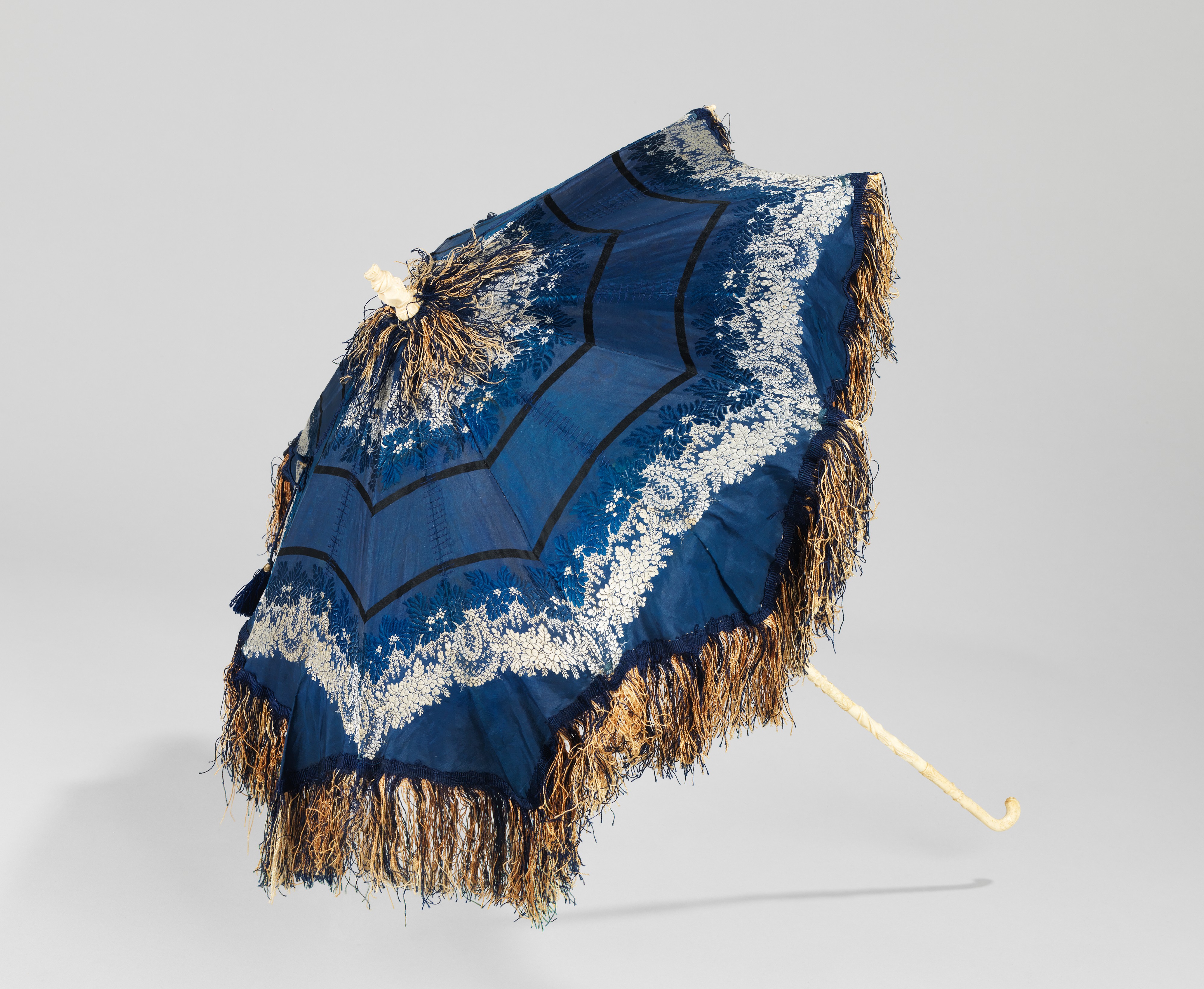 For evening, a blue fan could be a beautiful accessory. Victorian fans came in a variety of sizes and styles. There were painted paper fans, feather fans, and fabric fans spangled with gold and sequins. The below fan from the mid-nineteenth century is made of metallic paper with mother-of-pearl and ivory. 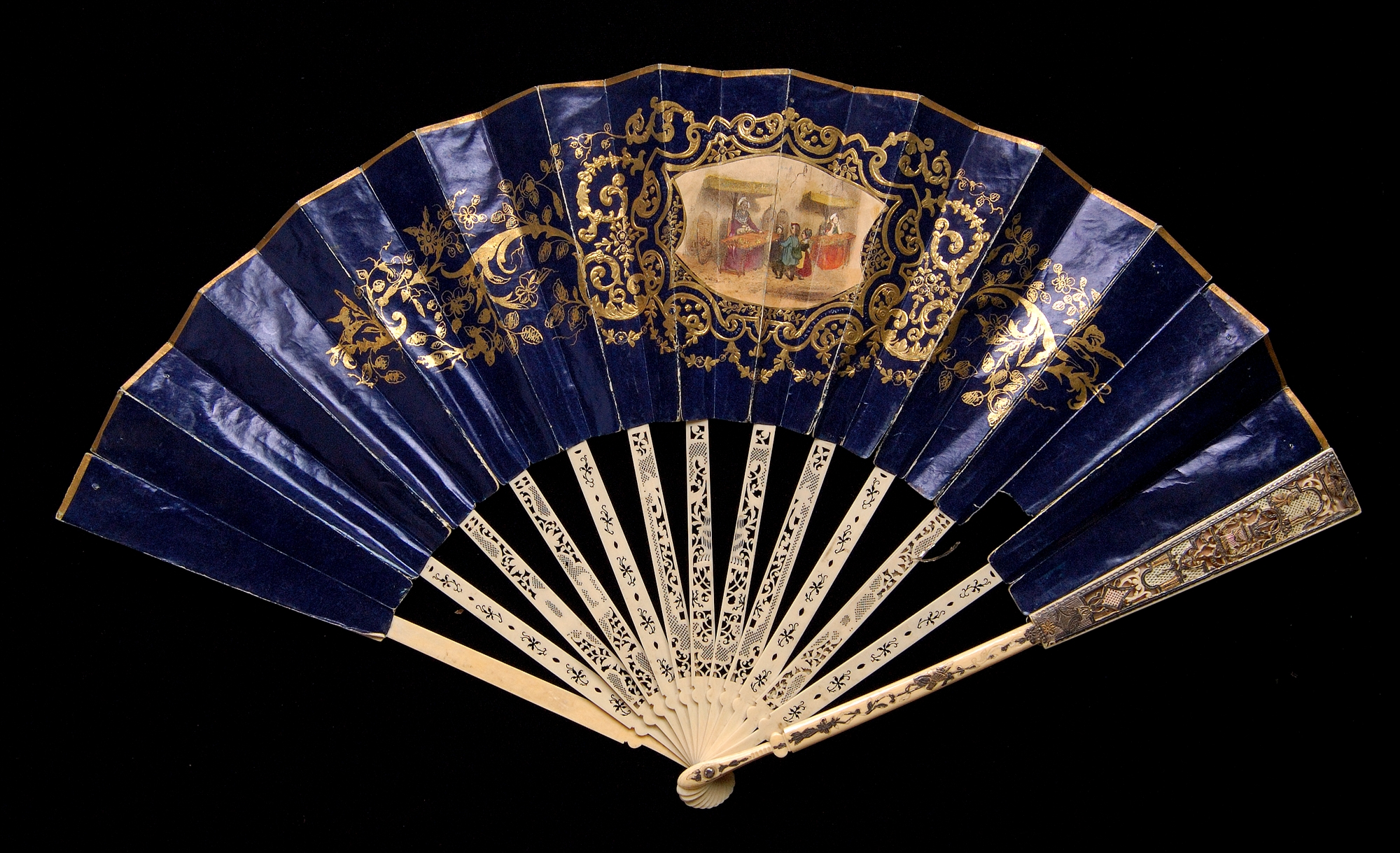 Victorian fans came in all shades of blue. The shade that a lady chose was dependent on the color of her evening dress. Fans could either harmonize with an evening dress or provide a pop of contrasting color. The below fan from the mid-nineteenth century has leaves of light blue satin embellished with steel sequins. 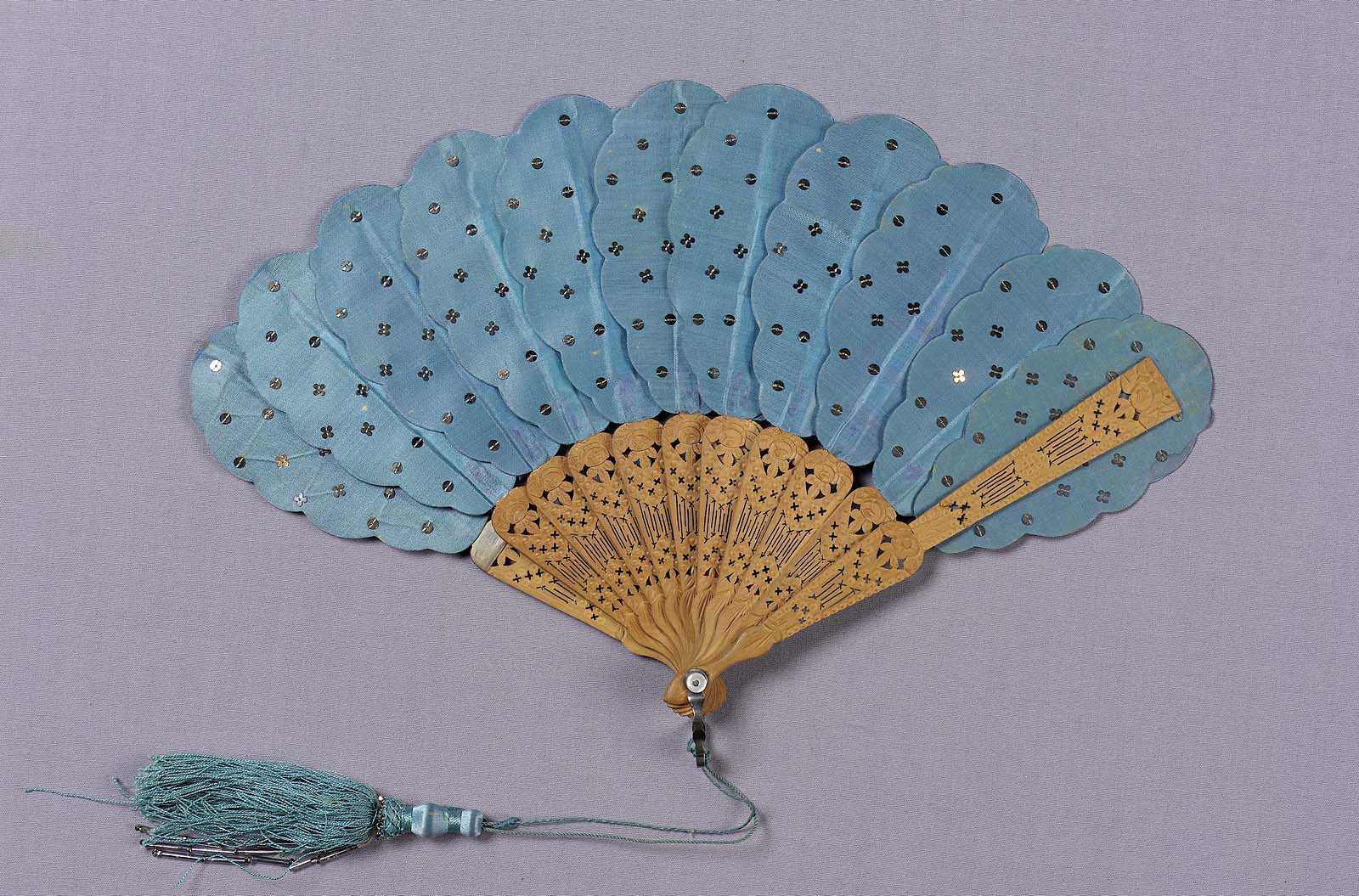 The fashionable Victorian lady had several options when it came to blue jewelry. Of these, the sapphire was, by far, the most popular. Victorian era sapphires came in shades from deep blue to pale blue and could be found set in necklaces, earrings, bracelets, brooches, and rings. 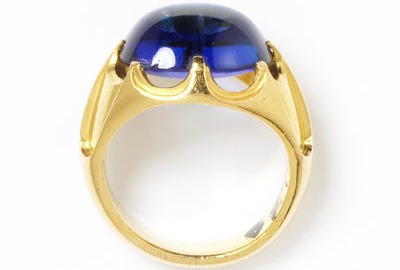 In his 1856 book Jewelry and the Precious Stones, author Joseph Rupert Paxton states that the sapphire was “the emblem of heaven, the firmament, truth, constancy, and fidelity.” In Victorian jewelry, it was often set in gold with other precious or semi-precious stones. Sapphires and diamonds were one of the most striking—and expensive—combinations. 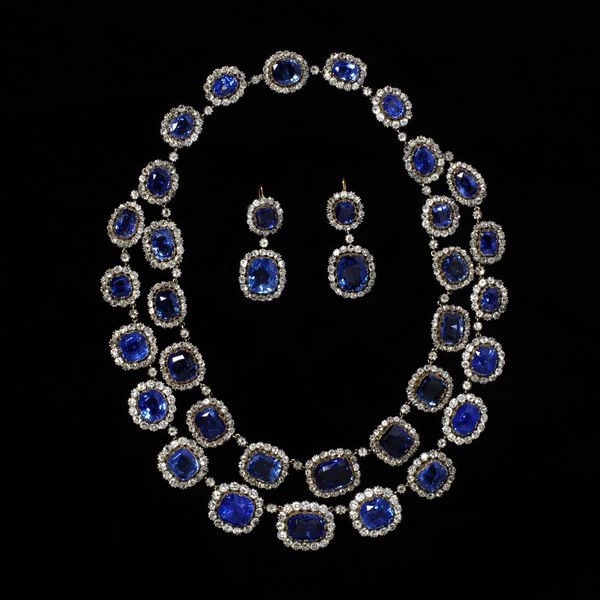 1850 Sapphire and Diamond Necklace and Earrings.
(Victoria and Albert Museum)

There is no one color that fully represents the Victorian era.  However, I hope the above has given you some idea of how blue was used in Victorian women’s fashion.  For a refresher on the shades of Victorian fashion that we have already covered, the previous articles in my series are available here:

In future, I’ll be profiling other popular shades of the era.  Until then, I leave you with the following wise words on color from an 1850 edition of Peterson’s Magazine:

“Want of taste is more frequently exhibited, perhaps, in the selection of colors inappropriate for the complexion, than in any other thing in female dress.” 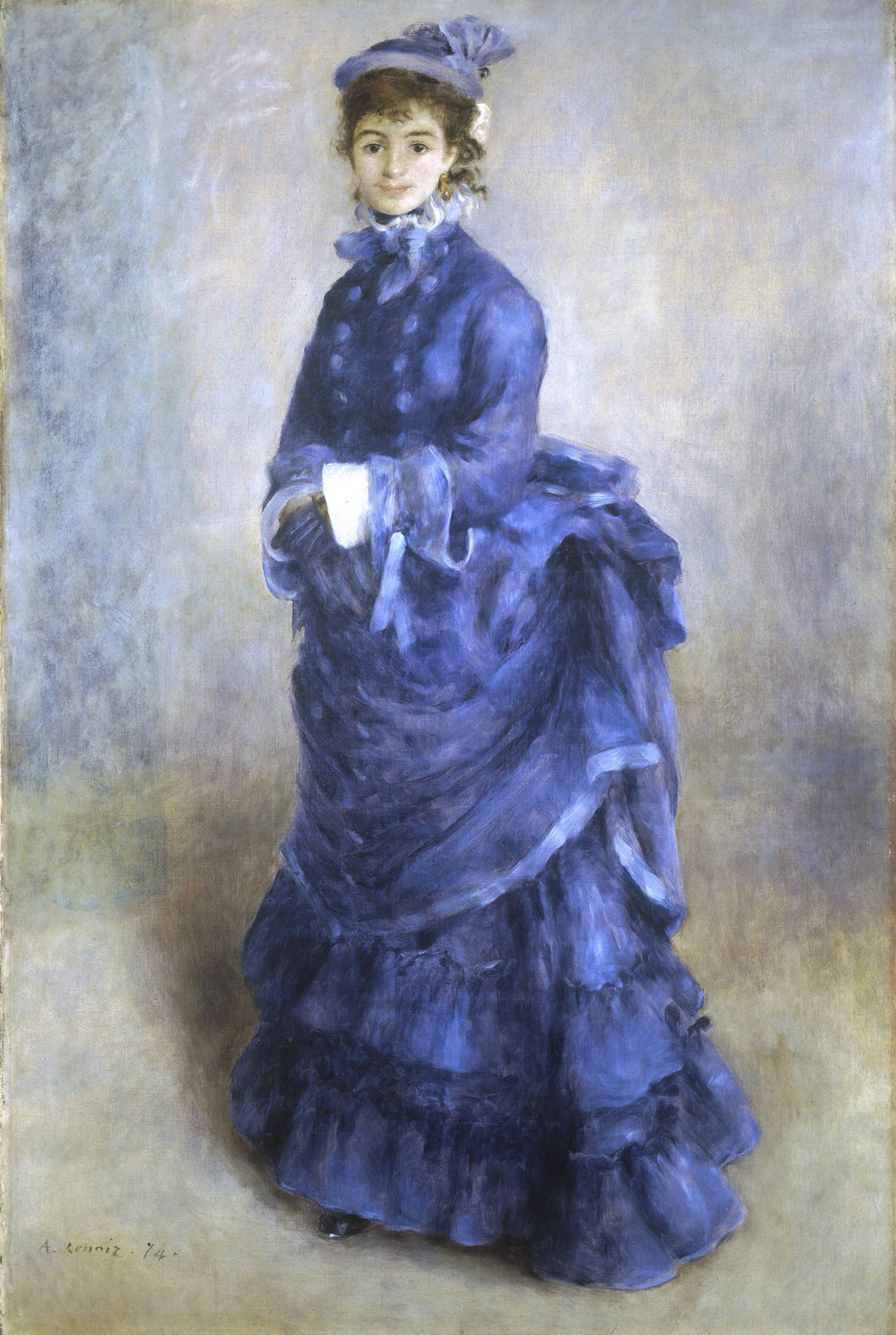