The 1777 edition of the London Magazine includes an interesting letter to the editor in which a gentleman—who signs himself as ‘A Friend to the Community’—has appended a proposed bill to levy a tax of ‘6d. in the pound’ on old maids. He claims that this tax will generate revenues of nearly £300,000 per annum, a sum which could then be used to help fund the British war against the American colonies. The proposed bill begins by stating:

‘That all maids, intitled to a clear yearly income of 100, or 1000l. in the whole, and so in proportion to any fortune above that sum, do at the age of 27 years (being the time limited for the commencement of their old maidship) register themselves in the books of the lord lieutenant of the county they live in, and then and there give in a true and particular inventory or schedule of all their real and personal estate…’

The bill goes on to state that any old maids of twenty-seven years or older who failed to register with the lord lieutenant of their county and give an inventory of their property would be penalized by having ‘a fourth of their fortune forfeited for the first offence’ and ‘double that sum for every other the like omission.’ 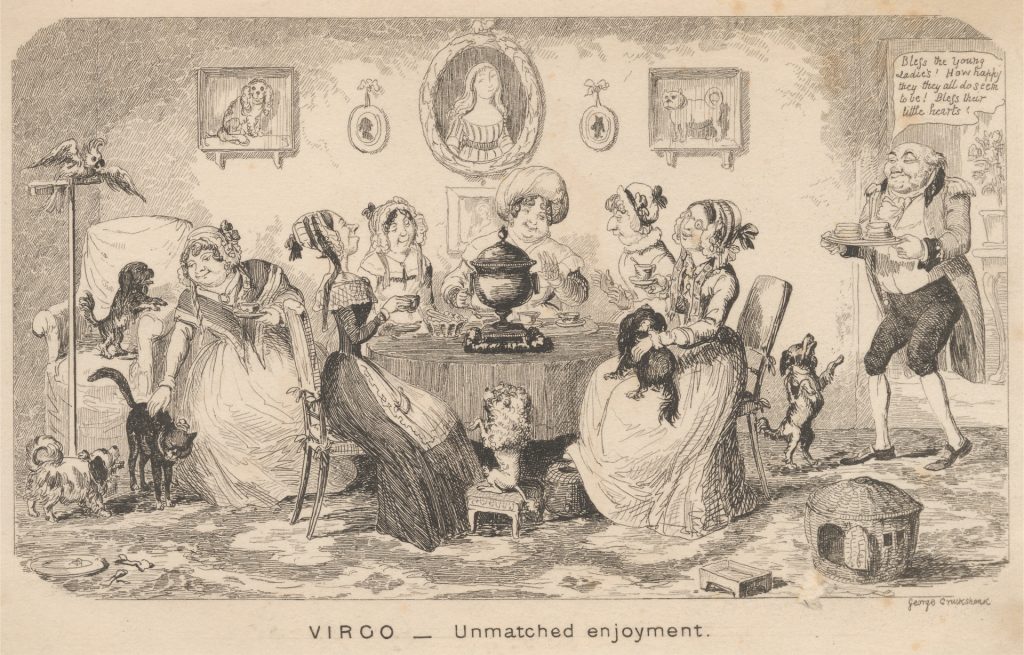 The bulk of the author’s ire seems to be directed at ladies who were old maids by choice—those women who refused offers of marriage in order to remain independent or to keep control of their own money and property. For women who remained unmarried simply because no man had ever asked them for their hand, he is much more sympathetic. In fact, he exempts these ladies from the proposed tax altogether, writing:

‘And be it further enacted, by the advice and authority aforesaid, that this act, nor any matter, clause, or thing therein contained, shall not extend, or be deemed to extend to such old maids, as never had a true, genuine, or serious proposal of marriage made to them, nor to any person on their account, for ten years preceding their old maidship, any clause, matter, or thing contained to the contrary notwithstanding.’

According to a further provision, those ladies of 27 years of age or older who wished to avoid the onerous spinster tax by getting married had only a limited number of years in which to do so. The author of the bill gives women what amounts to an expiration date—an age after which they are prohibited from entering into marriage. He writes:

‘And be it further enacted, that after the age of 35 years, no old maid shall be allowed, or permitted to enter into the holy state of matrimony; as at that period they shall be deemed incapable of performing any of the necessary functions incident to such happy state.’ 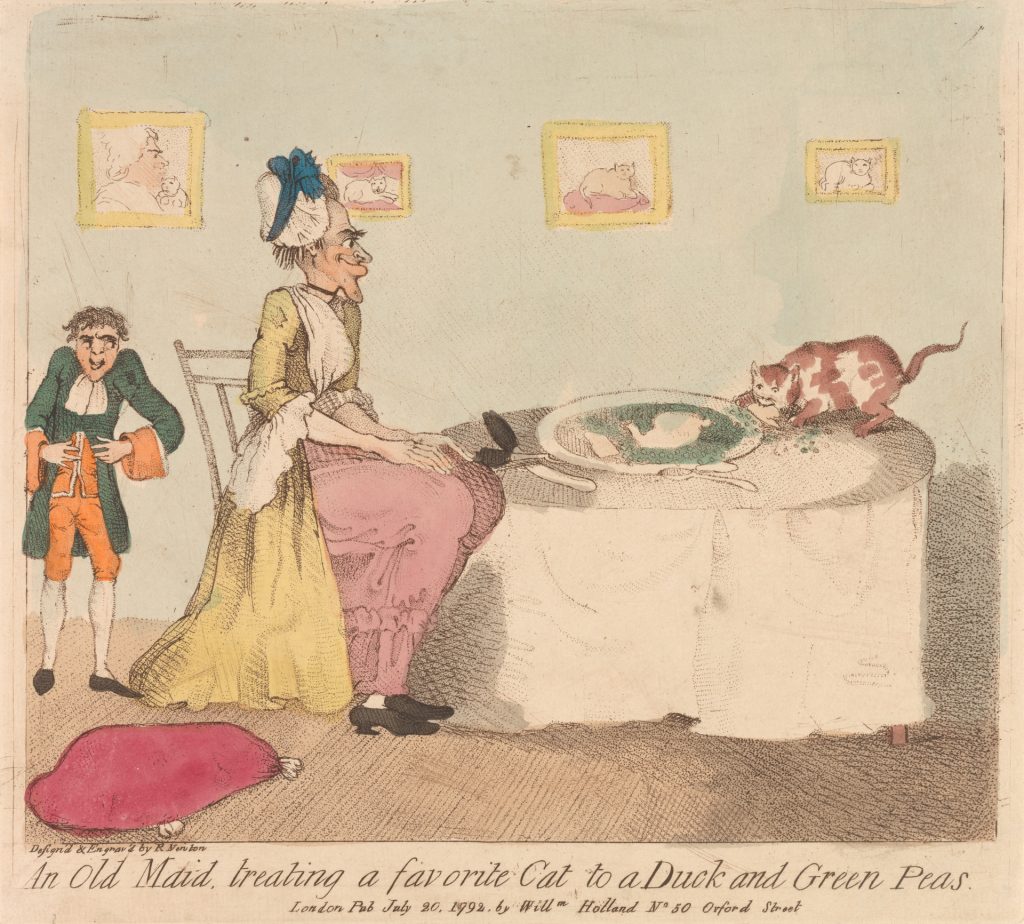 An Old Maid Treating a Favorite Cat to a Duck and Green Peas by Richard Newton, 1777–1798.
(Yale Center for British Art)

Adding insult to injury, the bill concludes by stating that ‘all legacies, given by old maids to favourite cats, lap-dogs, or to other animals, shall be void.’ Money that would have otherwise gone toward the care and support of an old maid’s pets after her death, would instead be appropriated by the government and used to defray the cost of the ‘present American war.’ As the final paragraph of the bill proclaims:

‘…and when and so soon as a peace shall be effected, or take place with the American colonies, that such sums be appropriated towards the support and maintenance of the Magdalene hospital.’

Magdalene hospitals, also known as Magdalene laundries, were 18th and 19th century institutions which housed unwed mothers and other ‘fallen’ women, often in conditions which were more brutal than a workhouse or a prison. The idea of taxing old maids to pay for the maintenance of such grim establishments seems a bit odd.  One would think it made more sense to tax the gentlemen responsible for the condition of the unwed mothers. Unfortunately, the author of the bill makes no mention of any taxes on men except for a lone postscript which states, quite clearly:

‘No old bachelor is to be concerned in raising this tax upon any pretence whatever.’ 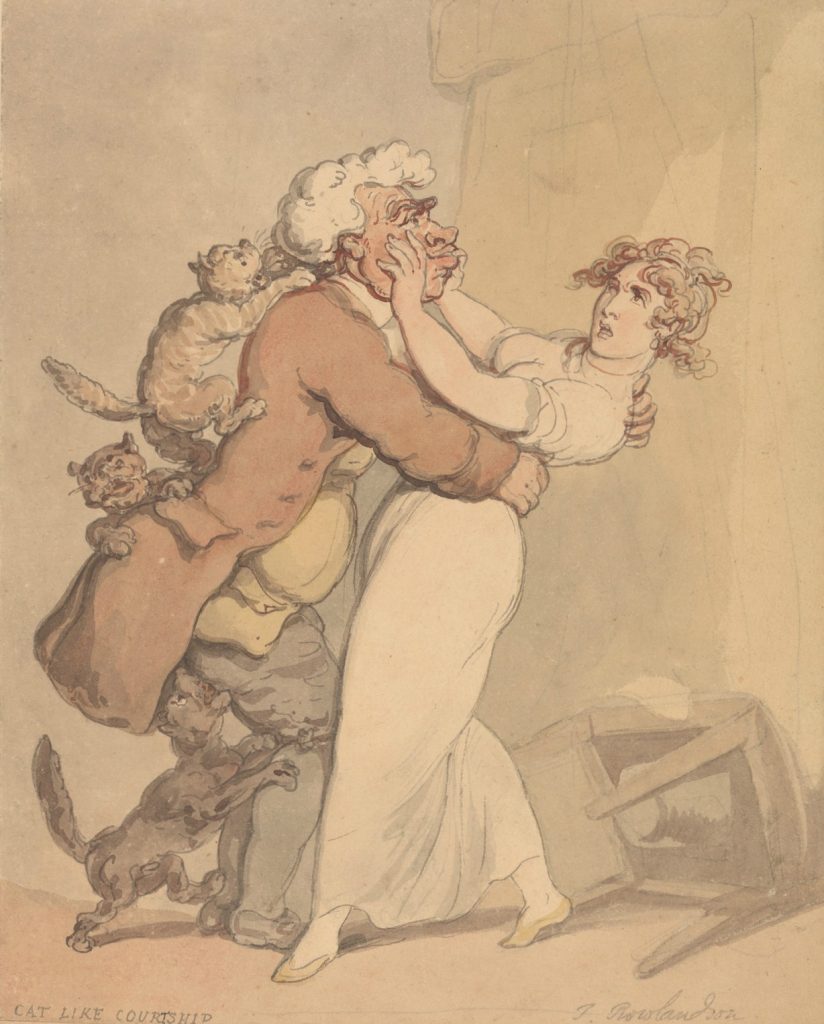 I suspect that the proposed bill written by ‘A Friend to the Community’ was meant purely as masculine humor.  Stories about old maids and their pets were a source of great amusement in both the eighteenth and nineteenth centuries. Nevertheless, there is something vaguely unsettling about the tone of this proposed bill.  It makes one wonder, just what type of man was this ‘Friend to the Community’?  And what in the world did an old maid ever do to him?