Never Bring a Dog into a Drawing Room: The Etiquette of Paying Calls with Pets

“Favorite dogs are never welcome visitors in a drawing-room.”
Martine’s Hand-Book of Etiquette, 1866. 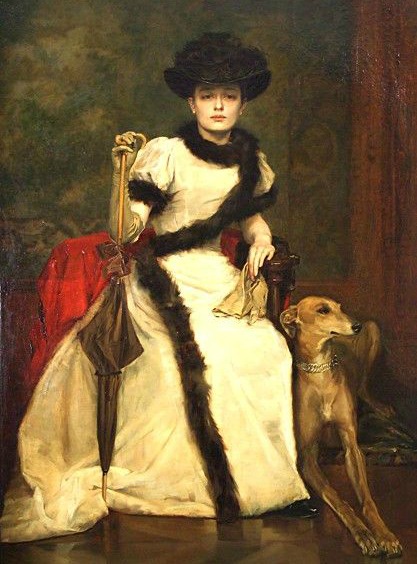 In the Victorian era, etiquette books offered very specific advice on how to conduct oneself when paying a social call. In some cases, this advice differed from book to book and decade to decade, but in one respect all the etiquette manuals throughout the Victorian era seem to agree. When paying a call on a friend or acquaintance, one should never bring along one’s dog. As the 1840 book Etiquette for Ladies states:

“To carry children or dogs with one on a visit of ceremony, is altogether vulgar. Even in half ceremonious visits, it is necessary to leave one’s dog in the ante-room…As for animals, it is a thousand times better not to have them at all.”

By the 1860s, advice relating to visitors’ dogs in the drawing room was relatively unchanged. Expounding on the subject in his 1866 Hand-book of Etiquette and Guide to True Politeness, author Arthur Martine informs his readers that:

“Favorite dogs are never welcome visitors in a drawing-room. Many people have even a dislike to such animals. They require watching lest they should leap upon a chair or sofa, or place themselves upon a lady’s dress, and attentions of this kind are much out of place.” 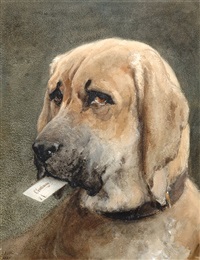 The strictures on dogs in the drawing room remained in place throughout the Victorian era in both England and America. For example, in her 1877 book the Ladies’ and Gentleman’s Etiquette: A Complete Manual of the Manners and Dress of American Society, author Eliza Duffy writes:

“Never allow young children or pets of any sort to accompany you in a call. They often prove very disagreeable and troublesome.”

While in her 1893 book Rules of Etiquette & Home Culture, author Mrs. Walter Houghton advises that:

“Callers should never take children or pets with them, as they are apt to be very annoying to some people.”

This advice was all well and good for the visitor who brought a dog along with them, but what was a guest to do if the dog in question belonged to their hostess? Fortunately, Victorian era etiquette manuals offered advice on this subject as well. In her 1884 book Etiquette, the American Code of Manners: A Study of the Usages, Laws, and Observances, author Mary Sherwood gives her readers instructions on how to behave if they encounter a dog in the drawing room of their host or hostess. She writes:

“The family dog is a very hard case to manage. If he be ugly, and frighten you, go around him cautiously; if he be dirty and offensive, and if, like Macbeth’s crime, ‘he smell to heaven,’ never speak of it. A family are always sensitive on this point. They will defend the dog at the cost of their lives, and as a guest, if you would preserve your popularity, do you also defend, praise, and endure the family dog.” 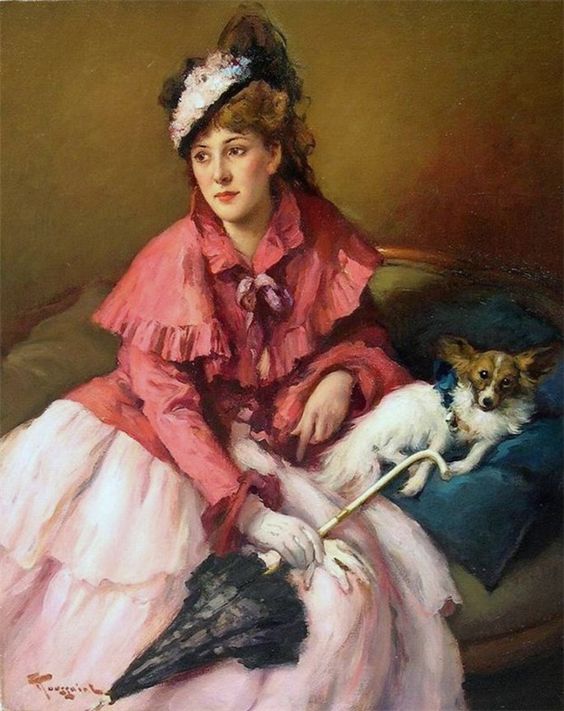 Sherwood goes on to advise that it is a guest’s job to be “as agreeable as possible.” Therefore no matter how bad the weather or how bad-smelling or bad-tempered the resident family dog, a guest must “never abuse the weather, or the family dog.” In her 1891 book Polite Life and Etiquette, author Georgene Benham goes one step further. Instead of merely refraining from verbally abusing or criticizing the family dog, Benham advises actively befriending domestic pets. To do so was as much a measure of good character as any other social grace. She writes:

“Do not hesitate to be the friend of any domestic animal. How rude, senseless, weak, and degrading it is to abuse the poor dog, cow, or horse, our servants and slaves. True, they were created for us, but for use, not to abuse.”

The general advice on bringing dogs along when visiting a friend or acquaintance seems fairly sensible and straightforward. What is not made clear in Victorian era etiquette manuals is whether this advice also applies to small lapdogs which a visiting lady might hold in her arms. After researching this topic quite a bit, I tend to think that the advice was geared more toward larger dogs who often jumped up on people and furniture. This is not to say that small dogs were wholly welcome in the drawing room of one’s host or hostess. In fact, when let down onto the floor, small dogs could often be just as destructive as their larger brethren. 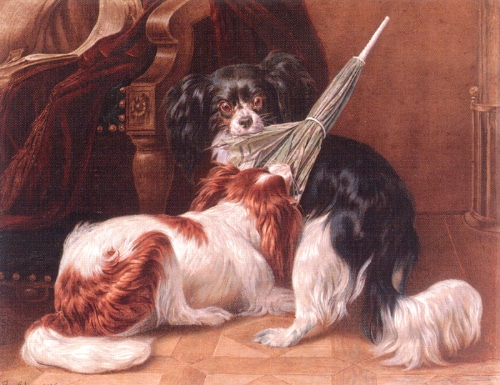 Thus concludes another of my Friday features on Animals in Literature and History. If you are interested in adopting a dog or if you would like to donate your time or money to a rescue organization, I urge you to contact your local animal rescue foundation or city animal shelter.  The below links may also be useful as resources:

Benham, Georgene Corry. Polite Life and Etiquette: Or, What is Right and the Social Arts. Chicago: Louis Benham & Co., 1891.

Duffy, Eliza Bisbee. The Ladies’ and Gentleman’s Etiquette: A Complete Manual of the Manners and Dress of American Society. Philadelphia: Porter and Coates, 1877.

Etiquette for Ladies: With Hints on the Preservation, Improvement, and Display of Female Beauty. Philadelphia: Lea & Blanchard, 1840.

Home  »  Blog  »  Never Bring a Dog into a Drawing Room: The Etiquette of Paying Calls with Pets