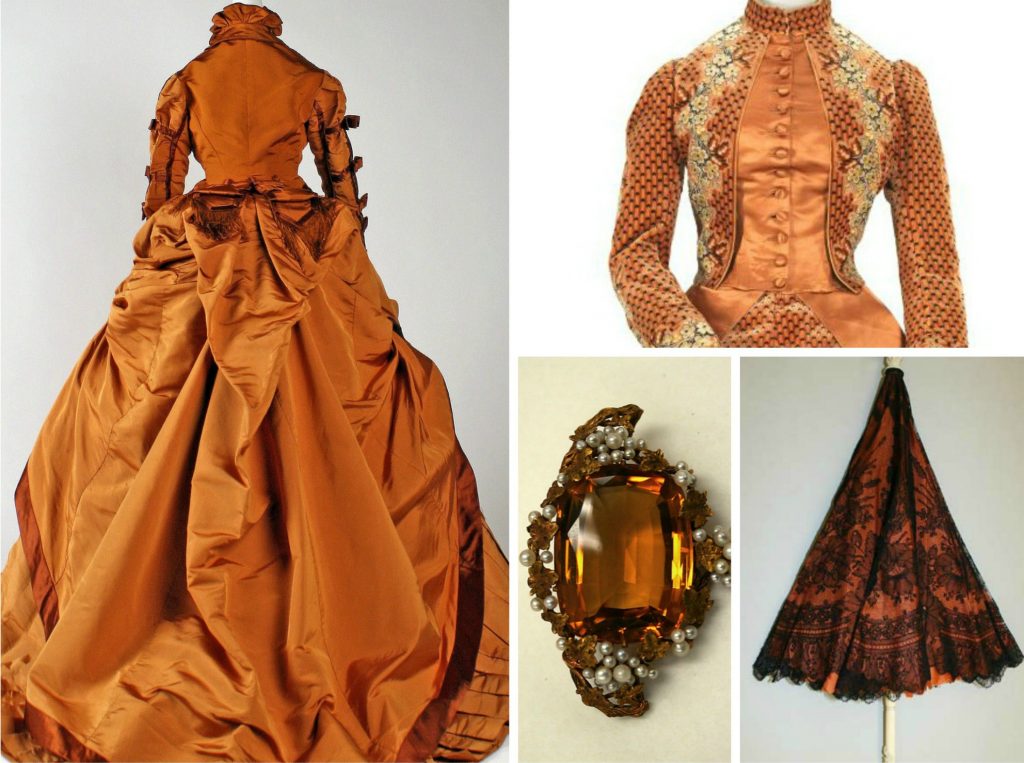 Unlike popular autumnal shades, such as golds, browns, and burnished reds, the Victorians generally regarded the color orange with disfavor.  Fashion magazines of the day advised against wearing orange dresses, calling the color ugly and claiming that it was unflattering to every complexion.  Even worse, as fashion historian C. Willett Cunnington reports, some believed that the color orange implied “a degree of animal passion which the pure ought not to possess.”  I had not intended to give orange an article of its own, but it’s Halloween today and I can think of no better occasion to showcase a selection of this much maligned—but nonetheless striking—shade of Victorian fashion.

A true, solid orange dress was quite rare in Victorian fashion.  The color was generally viewed as being too overpowering for the complexions of most women.  For example, in his 1870 book Colour in Dress, author George Audsley calls orange one of the colors “particularly to be avoided by the Fair Blonde,” while an 1855 edition of Godey’s Lady’s Book declares:

“Orange suits nobody.  It whitens a brunette, but that is scarcely a desirable effect, and it is ugly.” 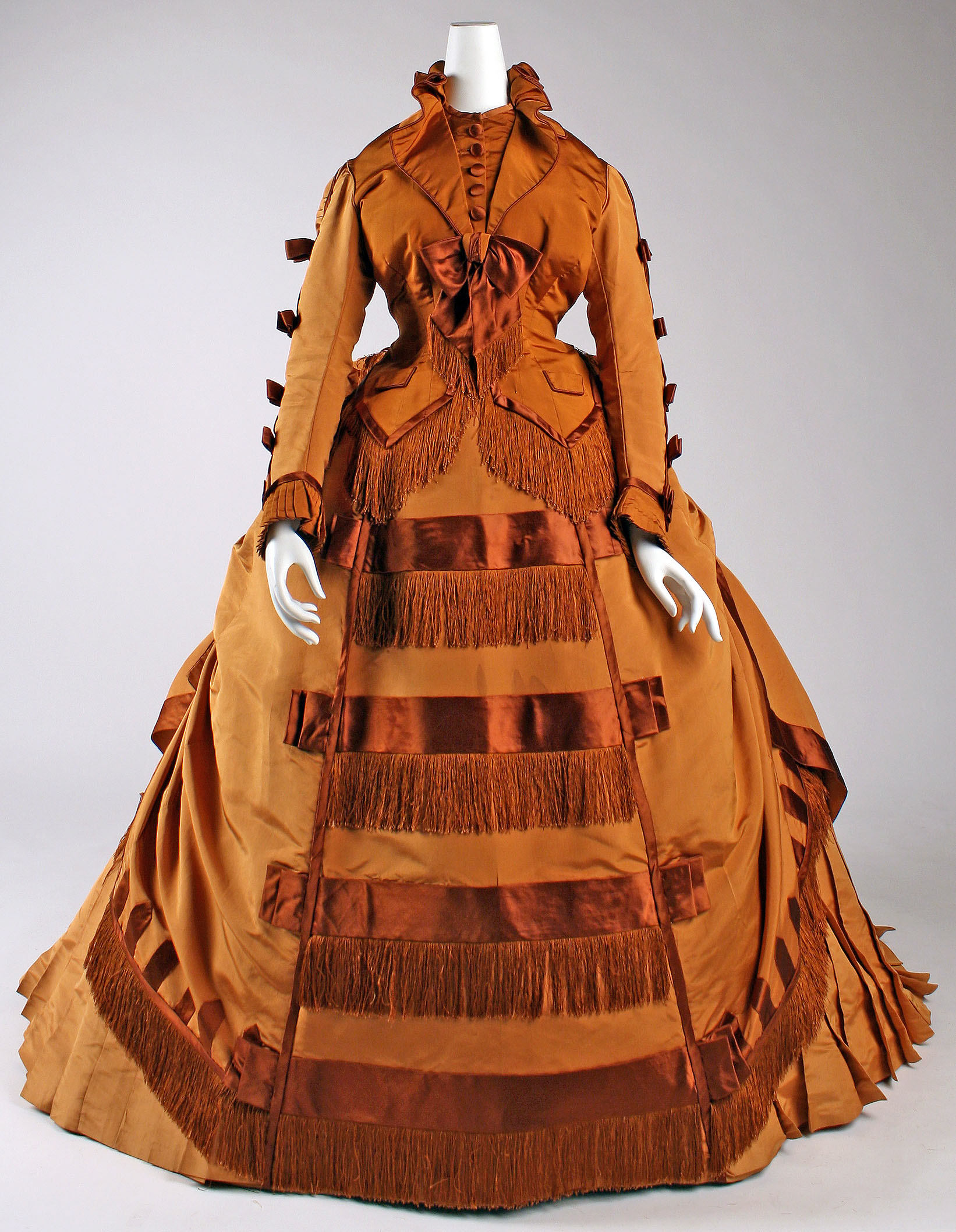 Does this mean that there were no instances of solid orange dresses during the Victorian era?  Not in the least.  One might see a peach-colored day dress or a warm, pumpkin orange visiting gown.  Bright oranges, however, were usually combined with other colors in the form of stripes, patterns, or trimmings. 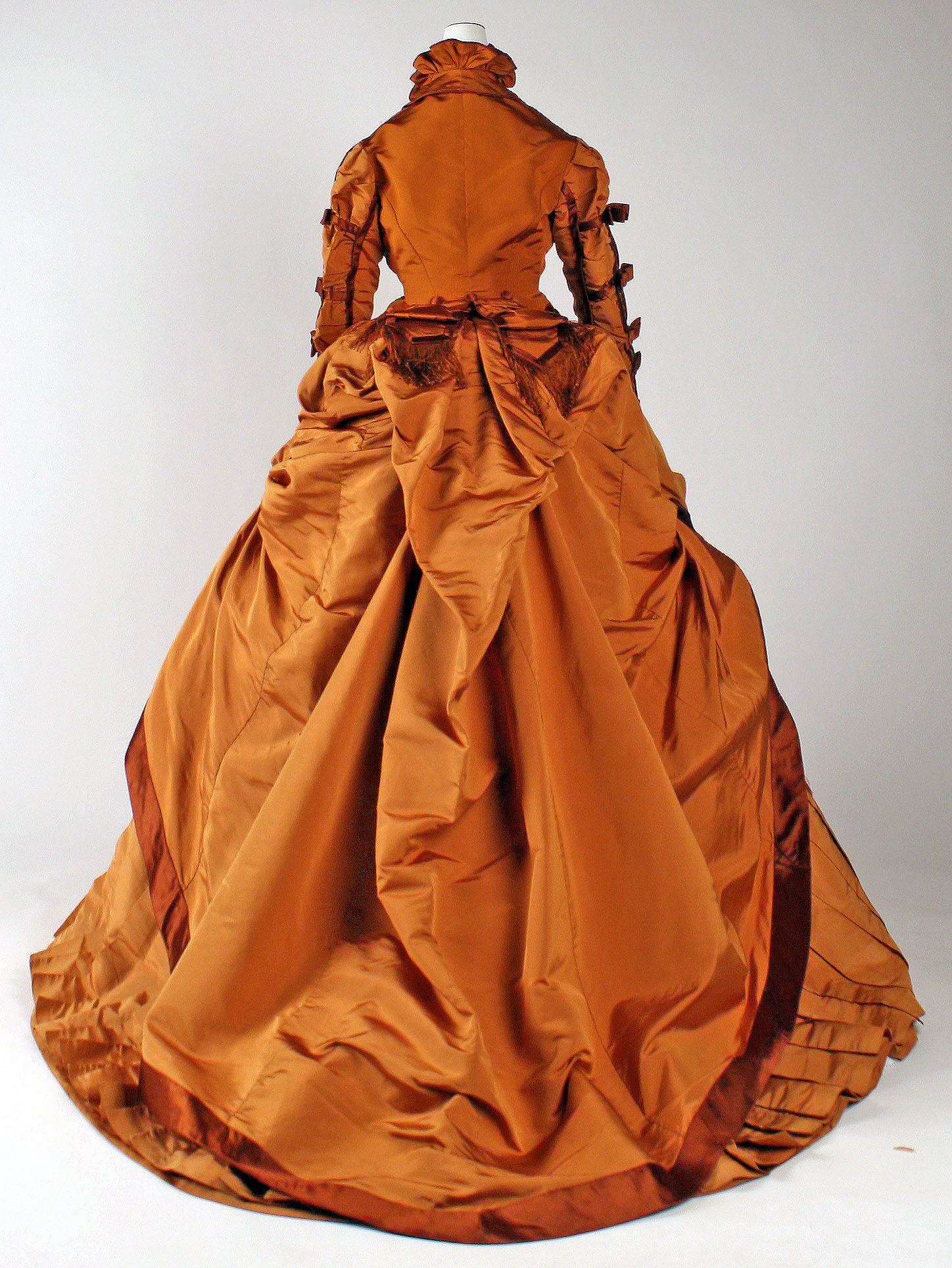 Orange was considered to be harmonious with several other colors.  Blue was recognized as orange’s opposite.  As such, Audsley states that blue and orange worn together formed a “harmony of contrast” which could be quite attractive on certain ladies.  Orange could also be worn with scarlet, a flattering combination which Audsley refers to as a “harmony of analogy.” 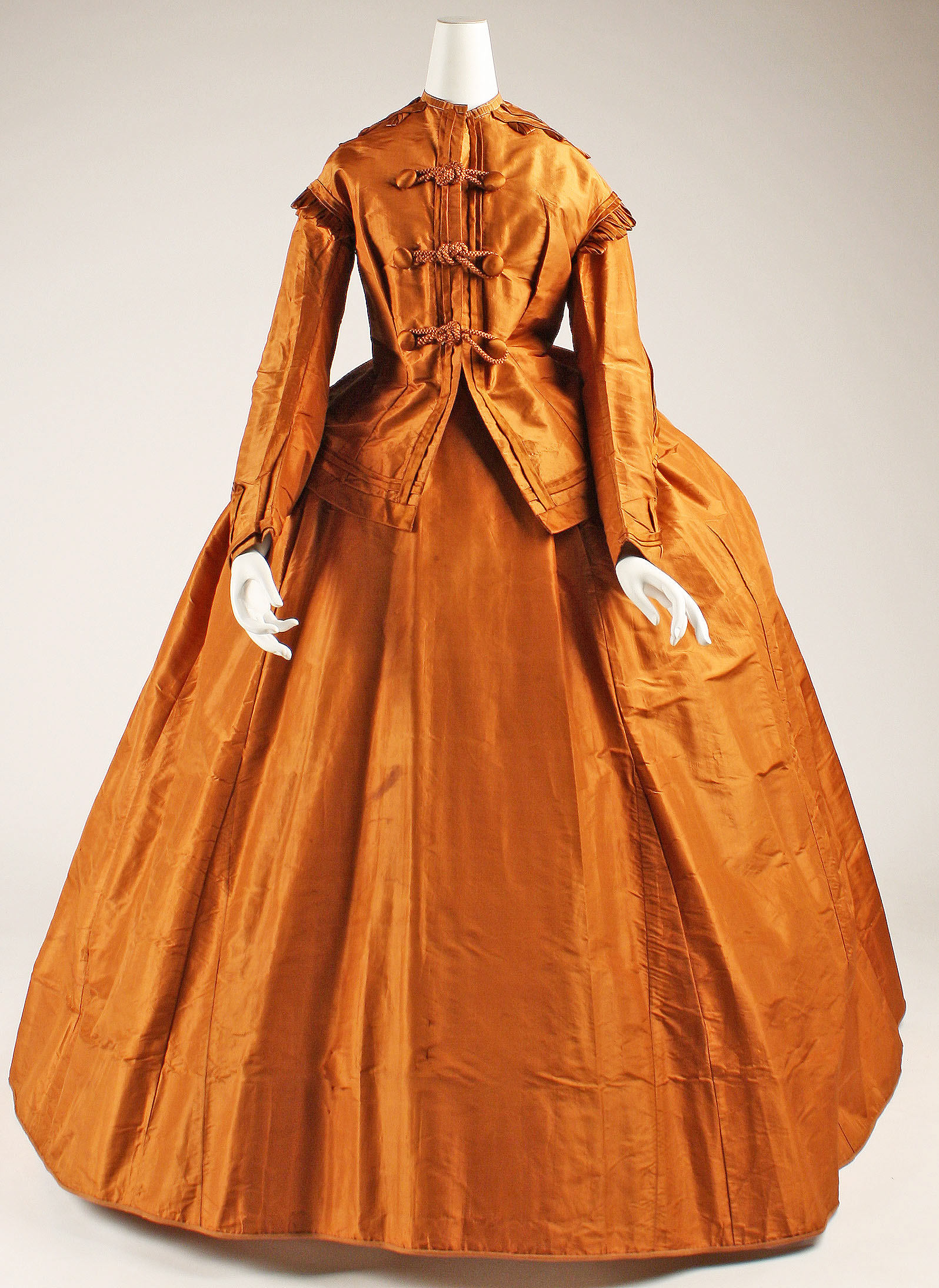 In addition to the colors mentioned above, Victorian ladies also paired orange with other autumnal shades, such as soft greens, browns, and yellows.  These shades were worn in various combinations, depending on what was popular that season.  According to an 1868 edition of the Gazette of Fashion a “pale shade of orange” mixed with a “light snuff-brown and a pale green” was considered a fashionable combination that year. 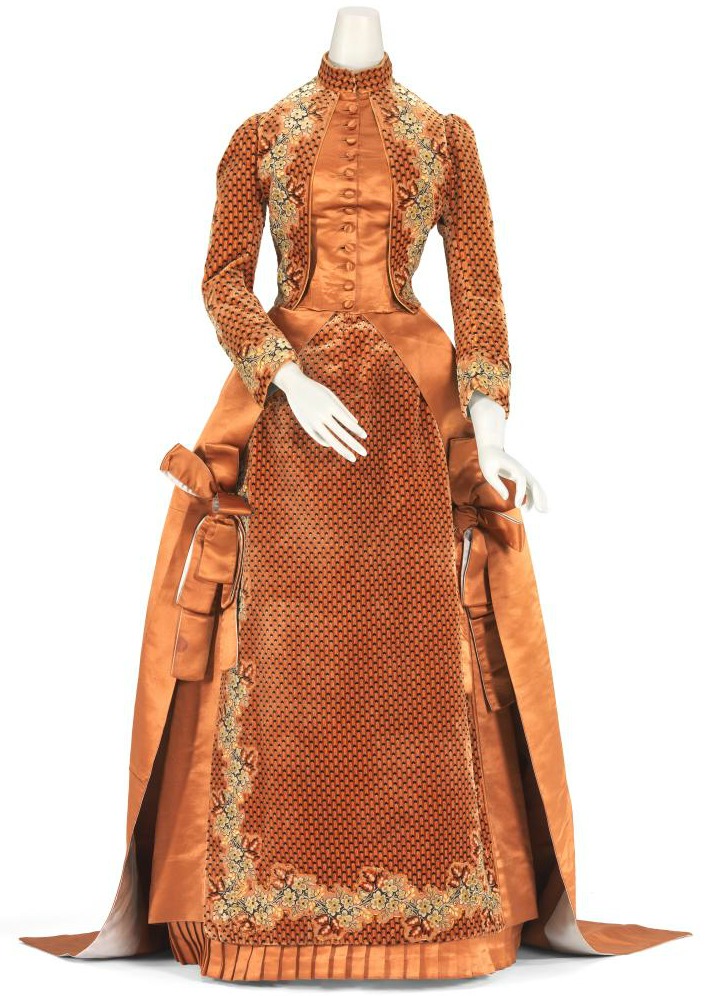 1884 House of Worth Silk Afternoon Dress.
(National Gallery of Victoria)

In choosing complementary shades, much depended on the underlying tones of the orange itself.  As a general guideline, Godey’s advised Victorian women to remember that “yellow-oranges contrast with violet-blue” and “orange-reds with the blue-greens.”  The below dress from 1857-1860 combines orange and gold with a blue train. 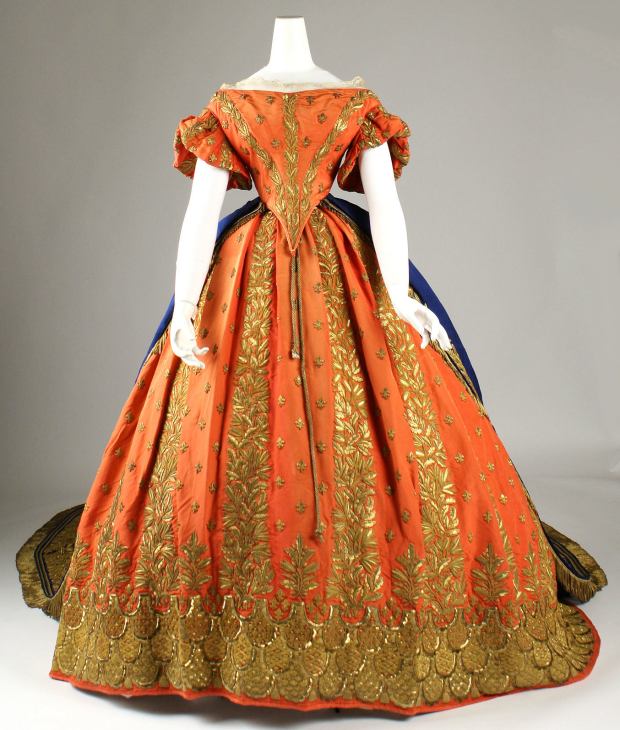 Though orange was chiefly an autumnal color, it could also be worn in warmer months, especially when paired with white.  White cotton dresses were often trimmed in orange ribbons, while orange silk evening dresses could feature white embroidery, as seen on the House of Worth evening dress shown below. 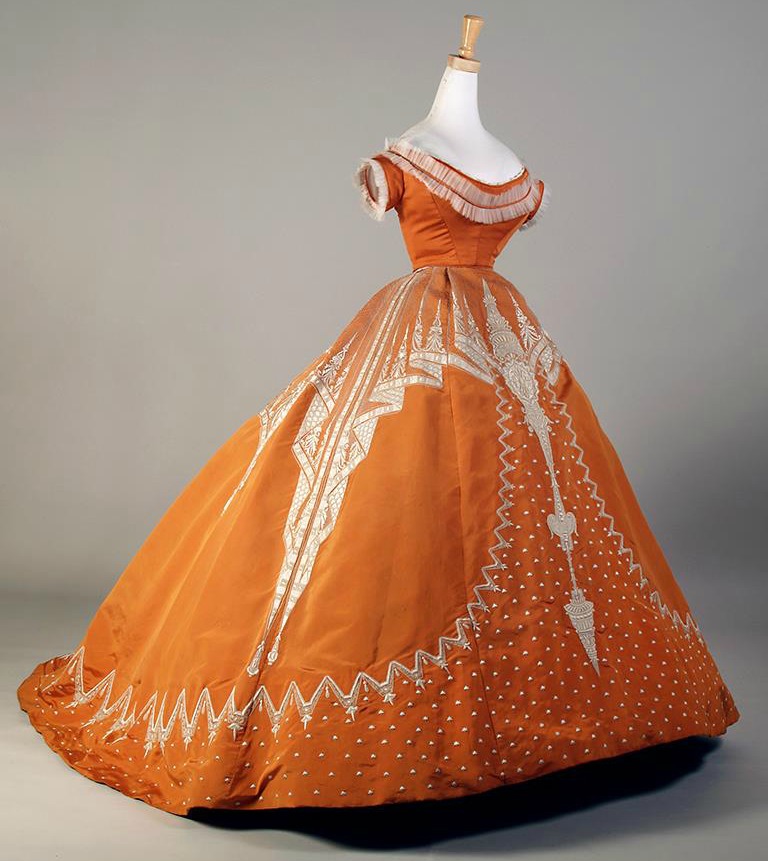 Lighter shades of orange, such as apricot or peach, were also fashionable options for warmer weather.  When combined with other shades, like cream, white, or blue, the effect was quite pretty.  The below evening dress is a soft peach with cream lace. 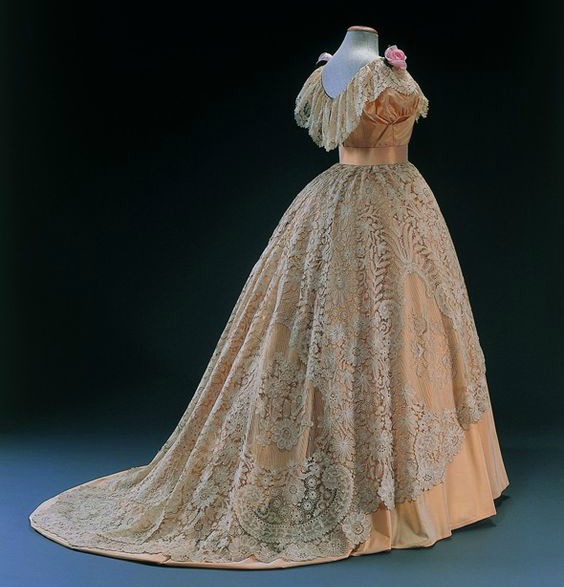 Though one is unlikely to see many bright orange or rich pumpkin tea gowns, pale peach was a popular shade for the tea gowns that came into fashion in the late 19th century.  The below silk tea gown from 1885 is just one example of how delicate these shades of peach could be. 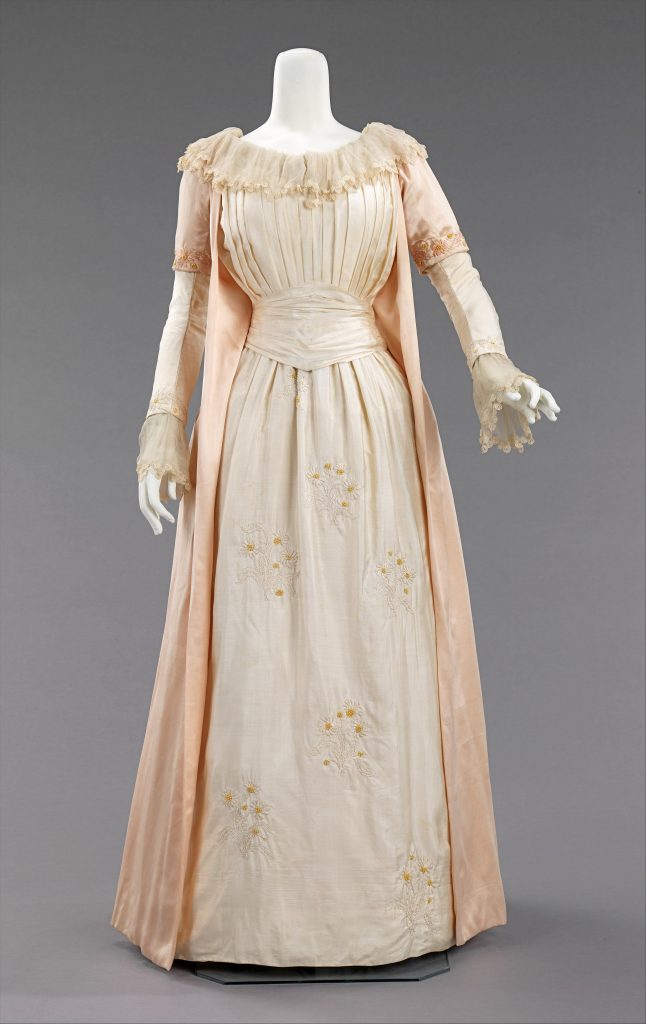 According to Audsley, orange and black were harmonious.  This combination—particularly evocative of Halloween—was rather striking and is not seen as often in gowns as it is in Victorian hats, parasols, and other accessories.  In these cases, orange silk or satin was frequently paired with black lace or jet beading.  The below 1860s parasol is orange silk with an overlay of black lace and a carved ivory handle. 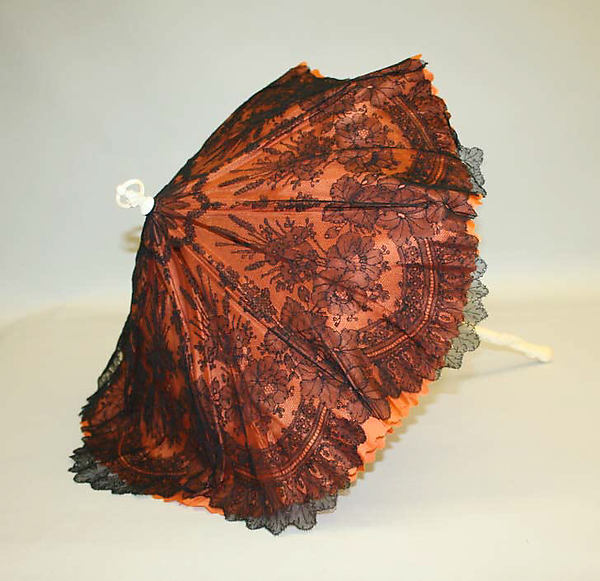 Fashionable hats and bonnets of every type were often trimmed with orange ribbons or orange flowers in shades ranging from pale peach to pumpkin.  As an 1847 edition of the Ladies Cabinet of Fashion, Music, and Romance reports:

“We have recently seen some decorated with shaded orange ribbons, the shades varying from the deepest to the palest shade of range.” 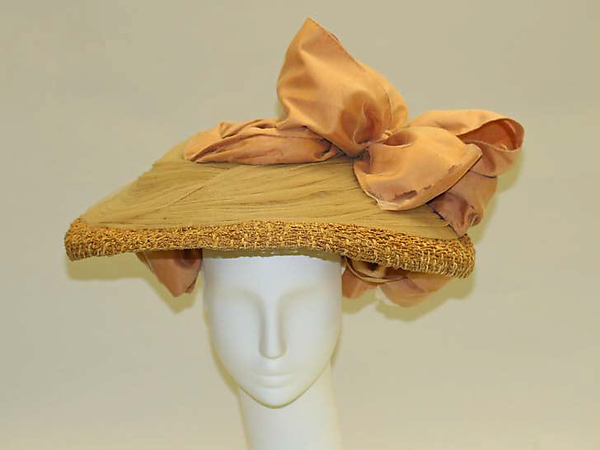 Some hats and bonnets were made of orange combined with other colors.  When the shades used were strong, the result could be quite dramatic.  This was particularly true when (as noted with the parasol above) orange was worn with black.  The below hat from 1888 is made of orange silk and jet. 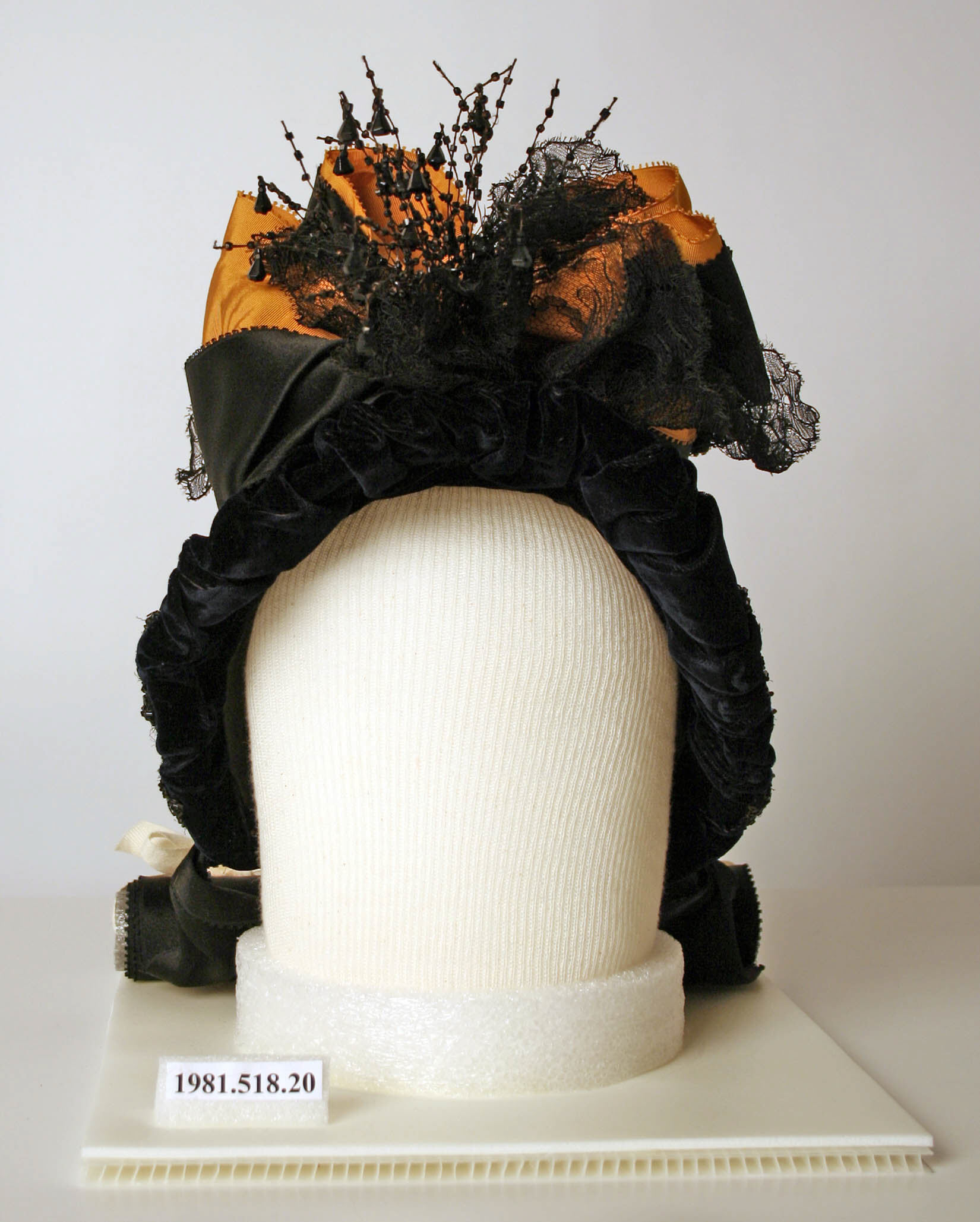 Somewhat less dramatic were the hats and bonnets made of lighter shades of orange coupled with a softer color, such as blue.  The 1850s capote below illustrates just how becoming shades of blue and orange could be when worn together. 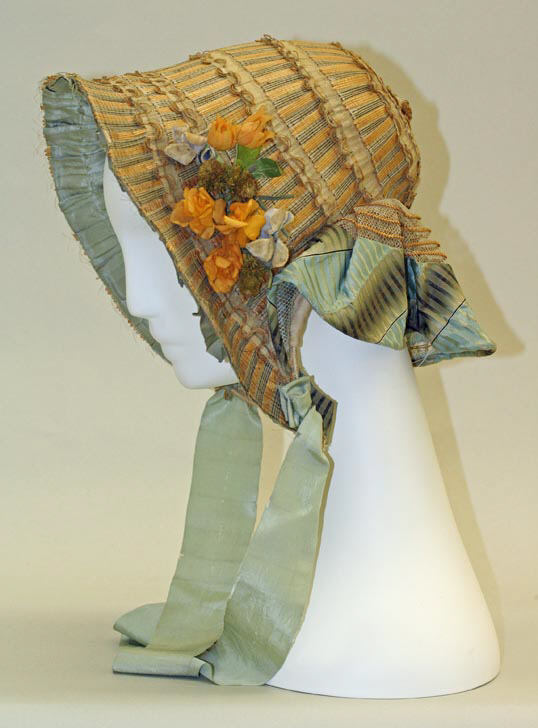 Even those not disposed to wear an orange dress or carry an orange parasol, might adorn their visiting dress or ball gown with a piece of orange jewelry.  Of these, an orange topaz was perhaps the most popular.  The below topaz is from the late nineteenth century and is accented with pearls and gold. 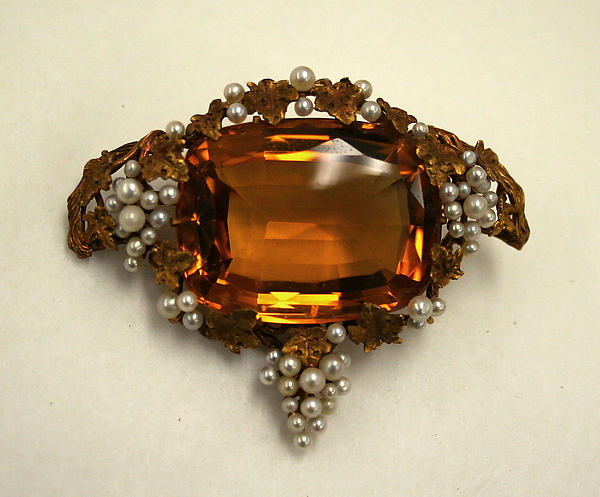 There is no one color that fully represents the Victorian era.  However, I hope the above has given you some idea of how orange was used in Victorian women’s fashion.  For a refresher on the shades of Victorian fashion that we have already covered, the previous articles in my series are available here:

In future, I’ll be profiling other popular shades of the era.  Until then, I leave you with the following wise words on color from the 1862 edition of the London Society Magazine:

“Experience, after all, is the best guide for those who have any eye for colour at all, and a little quiet observation upon their friends’ dresses during a morning or evening assembly, will teach them more than whole chapters on the subject.” 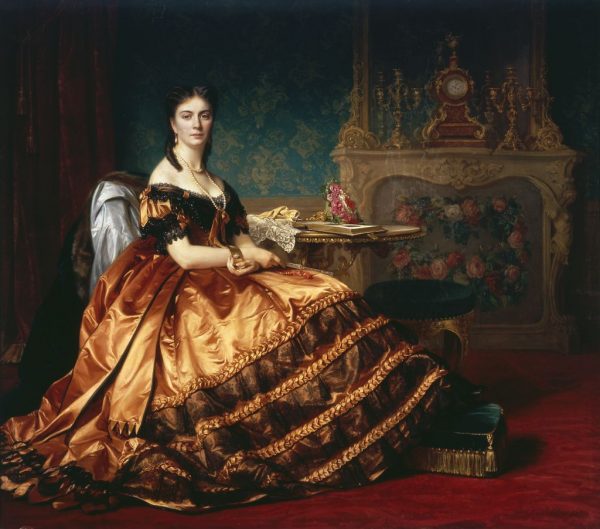 “Choice of Colors in Dress; Or, How a Lady May Become Good Looking.”  Godey’s Lady’s Book.  Philadelphia: Louis A. Godey, 1855.

Previous Post
Kissed Against Her Will: A Victorian Case of Assault and Abuse of Power
Read More
Next Post
The Dog on the Train: A Victorian Fox Terrier at King’s Cross Station
Read More