Emblems of the Soul: Butterflies in Victorian Fashion and Folklore 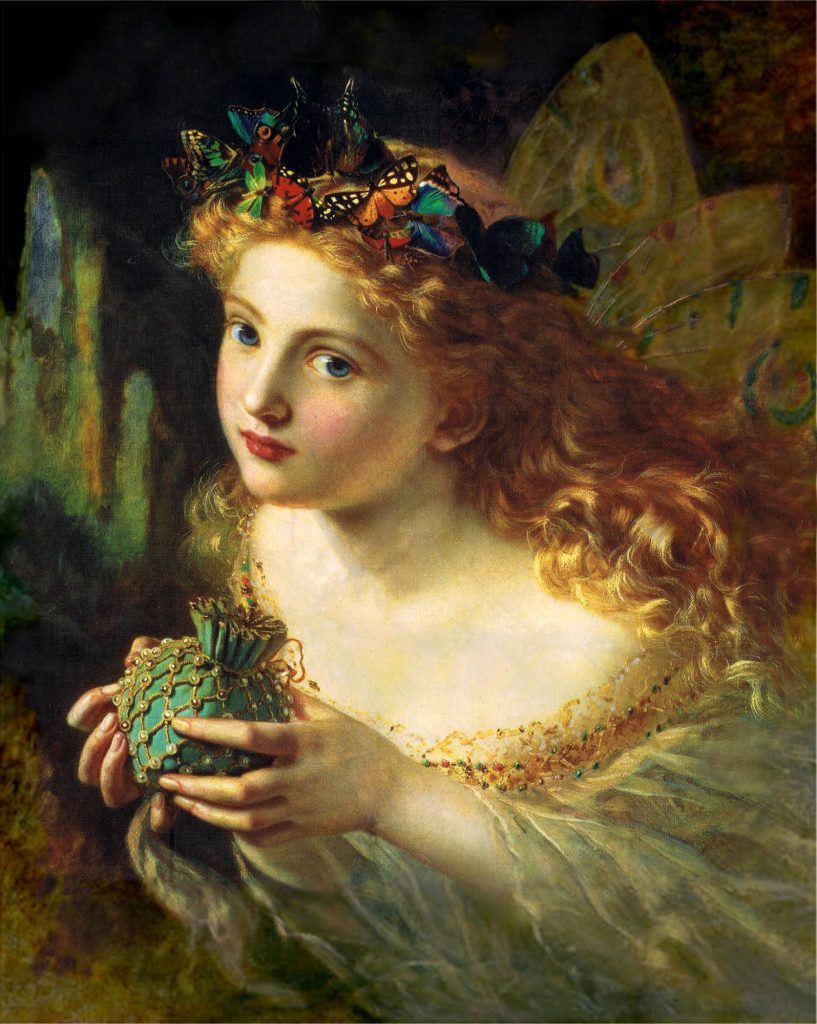 Take the Fair Face of Woman, and Gently Suspending, With Butterflies, Flowers, and Jewels Attending, Thus Your Fairy is Made of Most Beautiful Things by Sophie Gengembre Anderson, (1823-1903)

Victorians had a fascination with natural history.  This manifested itself in various ways, not the least of which was in fashionable clothing and décor.  A Victorian parlour, for example, might feature a scientific display of pinned butterflies.  While insects, such as butterflies, dragonflies, beetles, and grasshoppers, were often depicted in Victorian jewellery, with some insect brooches and hairpins set en tremblant (on a spring) so that the jewelled insect would tremble and shake as if it were actually alive.

Of these various insects, butterflies were undoubtedly the most popular of the Victorian era.  Embroidered butterflies decorated women’s ball gowns, enamelled butterfly pins adorned lady’s hats, and diamond butterfly hair ornaments accented fashionable coiffures.  But the butterfly was not only striking in its own right, it was also symbolic of something greater.  As Rosemary McTier explains in her book An Insect View of Its Plain:

“In the complex symbolic language of the Victorian era, flies represented humility and butterflies the soul…” 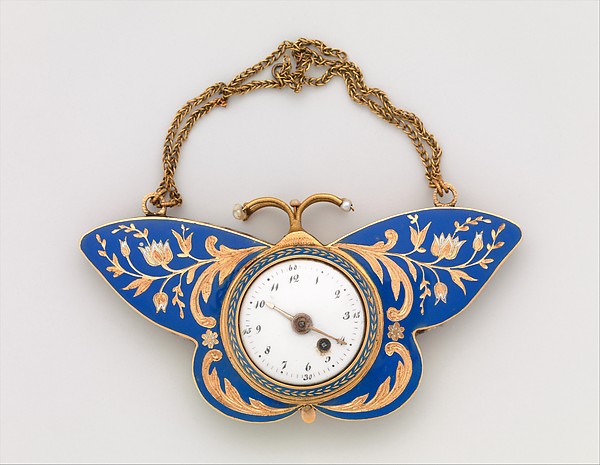 The belief that butterflies represented the soul was fairly widespread.  In the United Kingdom, regional folklore could be quite specific on the matter.  For instance, in Ireland, butterflies were thought to be either the souls of dead grandfathers or the souls of the newly dead waiting to pass through Purgatory.  While in Devonshire and parts of Yorkshire, they were believed to be the souls of unbaptized babies. 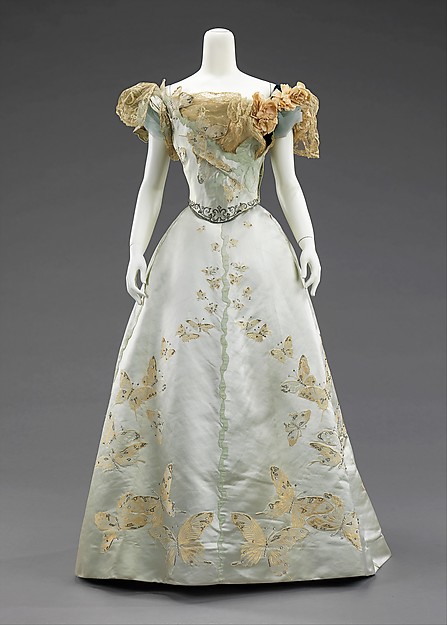 Much of these beliefs can be attributed—at least in part—to the notion that the metamorphosis of a butterfly was symbolic of the phases of human growth. Since there was a long-standing idea that, upon death, the soul would escape the body and simply fly away, the final phase of the butterfly’s life—wherein she emerges from her chrysalis and takes flight—was naturally connected with the last journey of one’s immortal soul. 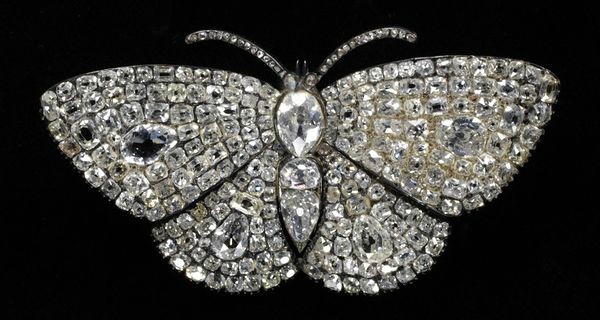 It was therefore quite unlucky to kill a butterfly…Except under certain circumstances. For instance, in his 2011 book, Some Notes on English Animal Lore, author T. Rhiselton Dyer relates the popular Devonshire belief that:

“…anyone neglecting to kill the first [butterfly] he may see in the season, will have, it is generally supposed, ill-luck for the remainder of the year.” 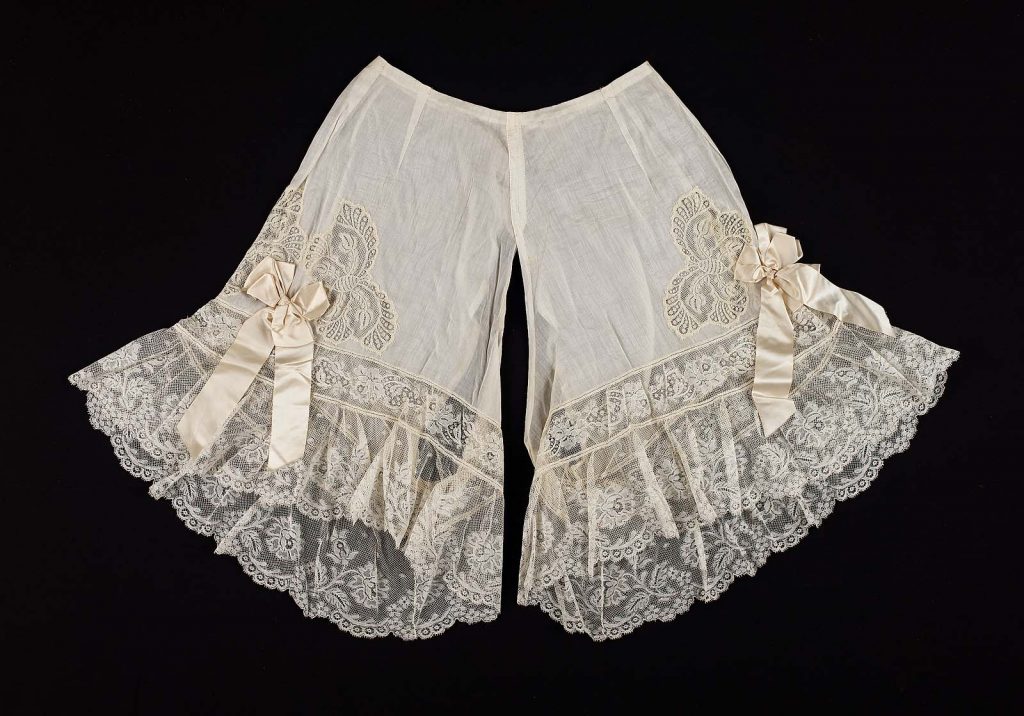 Butterflies were also symbolic of death in general. As the Oxford Dictionary of English Folklore states:

“Butterflies and moths were associated with death, sometimes merely as omens, sometimes as the soul or ghost.”

These butterfly omens came in many ways.  For example, in the nineteenth century United States, some people thought that a trio of butterflies was an omen of death.  Others subscribed to the popular belief that if a butterfly landed on your shoulder it was a sign that you would die relatively soon. 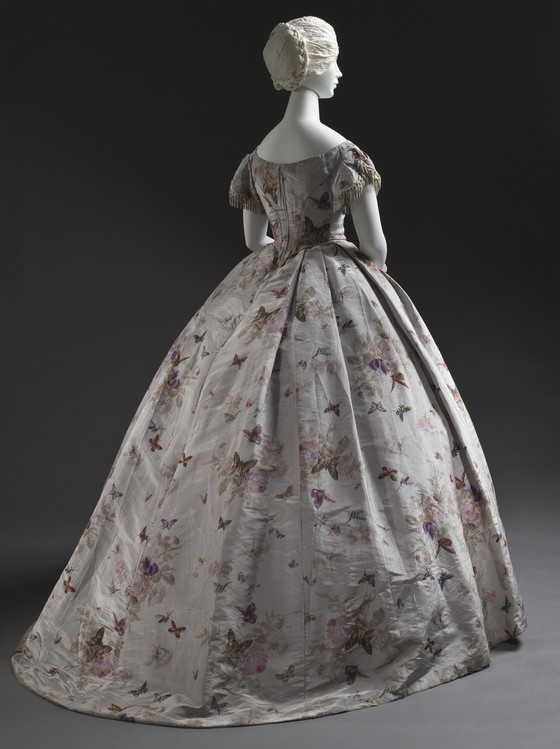 Such associations might make one wonder that Victorians were so keen on adorning their clothing and their homes with butterfly motifs.  However, Victorians had a great love of symbolism, whether via insects, animals, or flowers.  By the second half of the nineteenth century, they were also becoming quite comfortable with the idea of death.  Victorians of all classes carried memento mori, either in the form of jewellery—often carved in the likeness of a skull or an hourglass (to illustrate that one’s earthly time was growing shorter)—or in the form of a photo of a dead loved one or a brooch containing a lock of a deceased loved one’s hair. 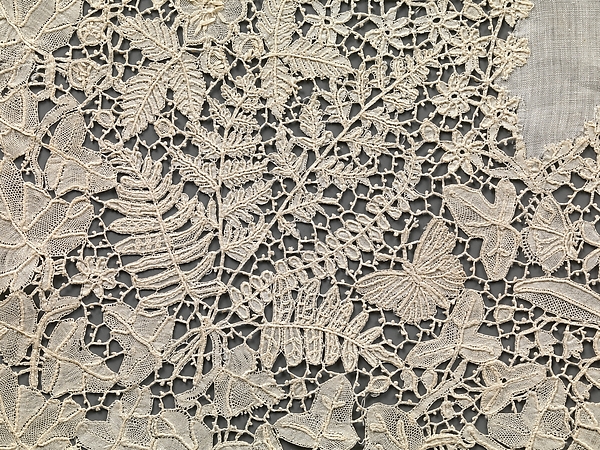 Spiritualism was also on the rise in the second half of the Victorian era, with many participating in séances or attempting to contact the dead.  Even Queen Victoria herself—by this point in a state of deep mourning after the death of Prince Albert—was suspected of engaging in a secret séance at Windsor Castle. 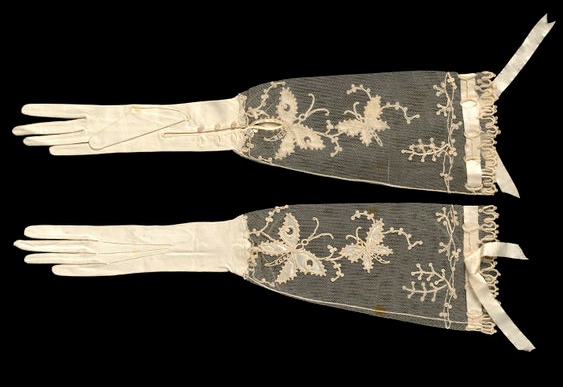 In this context, butterflies as a fashion accessory seem rather tame.  Nevertheless, it is always good to know the deeper meanings that exist in some elements of Victorian dress and décor.  At the same time, it is important to remember that, to some people, butterflies were not so much symbolic of the supernatural as simply elegant and beautiful—perfect accessories for the fashionable Victorian lady. 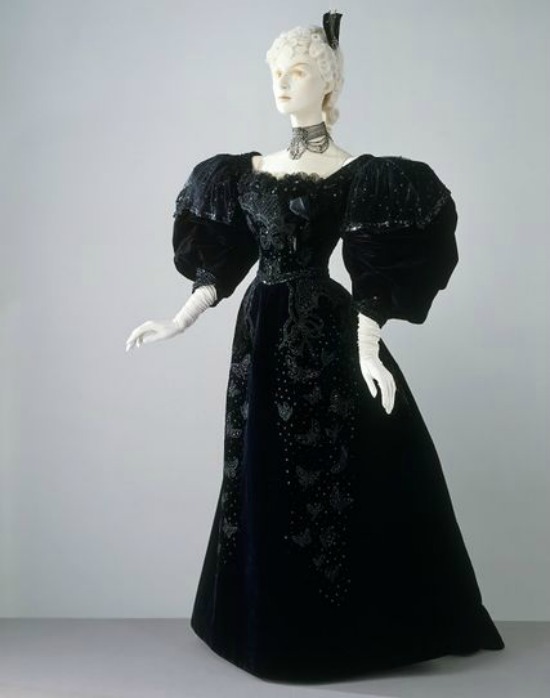 Before closing, I must note that butterflies also featured regularly in Japanese art and fashion, such as the painted fan below. The Victorian love for Japonisme encouraged the use of Japanese motifs in fashion and home  décor which was yet another reason butterflies were so much in fashion toward the end of the nineteenth century.  For more on Japonisme, you can read my article linked below: 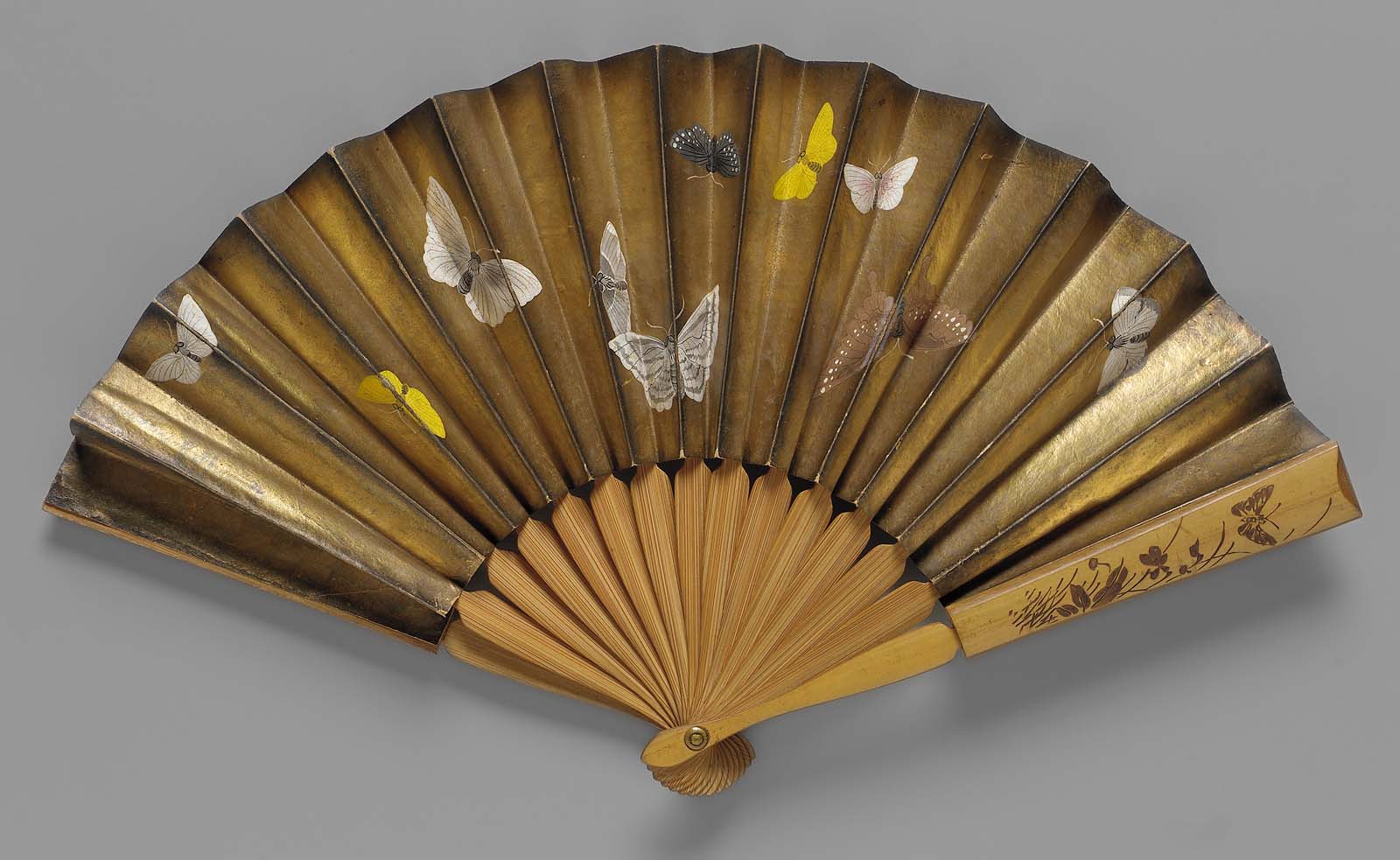 Thus concludes another of my now twice monthly features on animals in literature and history.  Butterflies are one of my favourite creatures in the animal kingdom.  However, rather than pinning one to your hat, I recommend admiring them in their natural habitat.  Below is a link to the butterfly rainforest feeding station cam at the Florida Museum of Natural History.

Previous Post
James Tissot’s Fashion Plates (1864-1878):  A Guest Post by Lucy Paquette
Read More
Next Post
Kissed Against Her Will: A Victorian Case of Assault and Abuse of Power
Read More

Home  »  Blog  »  Emblems of the Soul: Butterflies in Victorian Fashion and Folklore