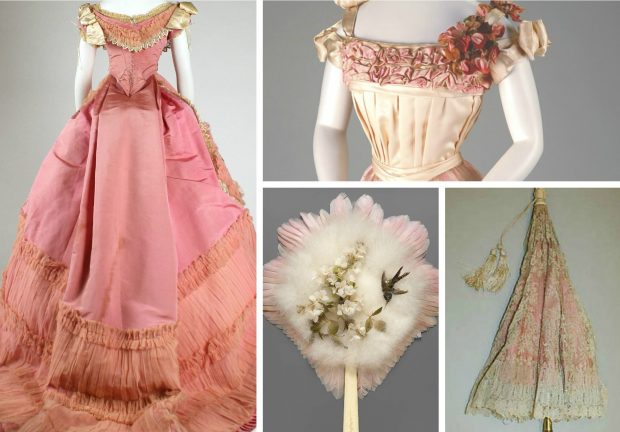 During the Victorian era, pink was considered a sweet, feminine color, suitable for the gowns of young ladies in their first season.  It was also fashionable for more mature Victorian women, who often wore evening dresses made of fine pink satins and silks.  Most commonly of all, pink was an accent color used for trim and accessories.  Ladies carried pink parasols and pink fans.  They decorated their bonnets with pink ribbons and flowers.  And, in the summer, their light cotton gowns were brightened with pink stripes and pink floral sprigs.  In today’s article, we look at some of the loveliest examples of the color pink in Victorian fashion.

The 1862 edition of Littell’s Living Age states that pale pink was not an ideal shade for daytime wear, explaining that “in daylight, pink heightens the sallowness of the complexion.”  For evening dress, however, pink was highly recommended as it was “often becoming by candle-light.”  The below dress is a classic example of a late 19th century pink evening dress.  Made of silk, it is trimmed in pink flowers. 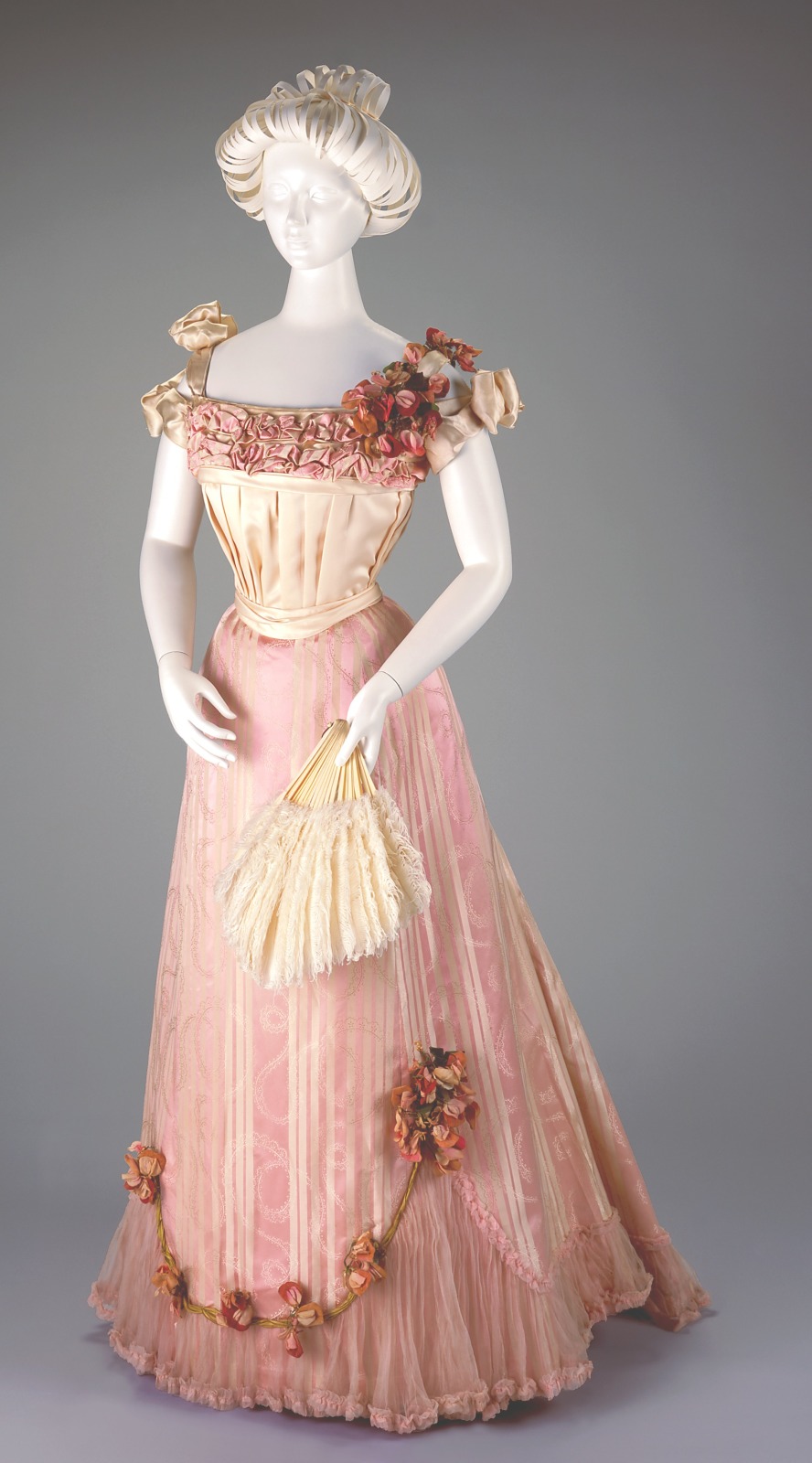 According to Littell’s Living Age, pink was most flattering when “uncombined with other colors.”  As for trimmings, Victorian ladies were advised that a pink evening dress was “more elegant” when worn with flowers or trimmings that were also a shade of pink.  As an example, the below evening dress is made with a pale pink satin and a slightly darker pink tulle. 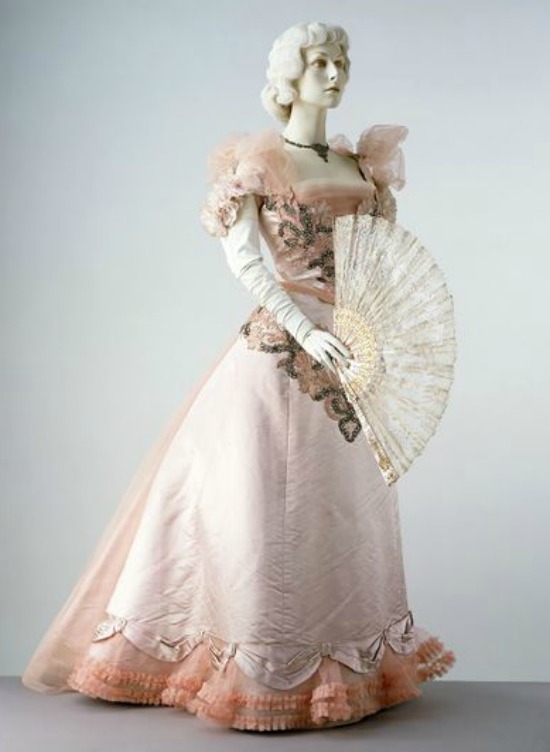 Pink was considered a flattering color for blondes and fair-skinned brunettes, but the 1860 issue of Godey’s Lady’s Book advises that “those of darker complexion must avoid pinks.”  Littell’s Living Age echoes this sentiment, warning ladies with “raven hair and dark eyes” to steer clear of pink and choose deep reds instead.  The pink silk ball gown below looks like it may have fit the bill for a Victorian blonde or brunette. 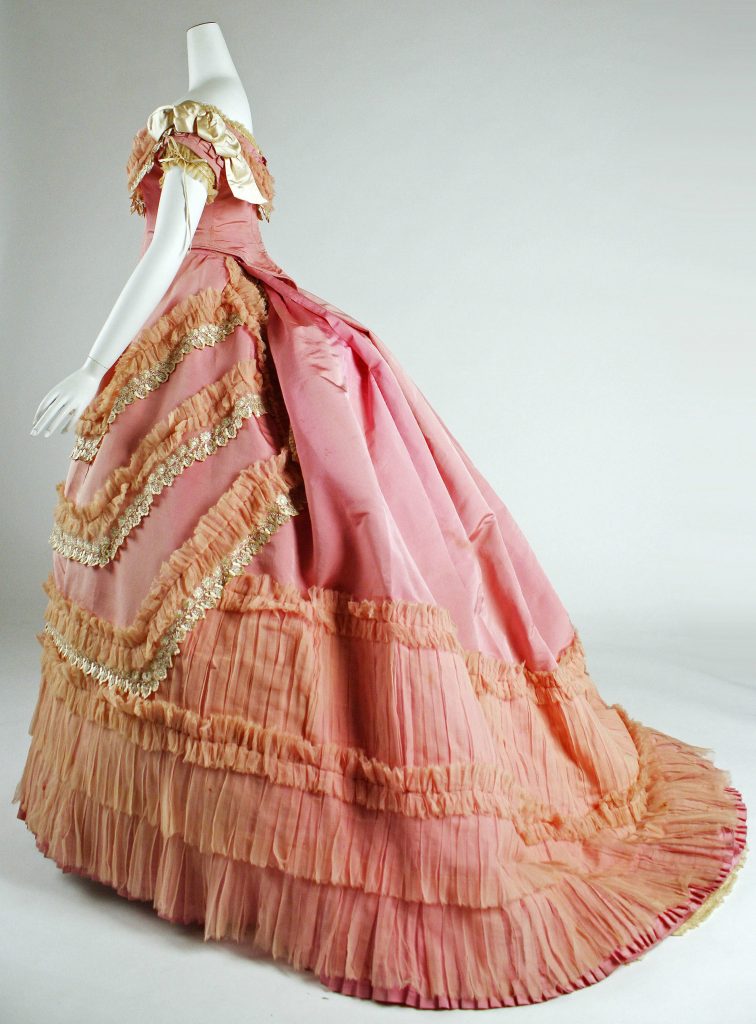 Slightly darker shades of pink were suitable for morning dresses, day dresses, and tea gowns.  These included colors such as “shrimp-pink” and “salmon-pink” (frequently mentioned in Victorian fashion magazines of the day).  The brighter shades of pink could be quite dramatic, as illustrated by the silk taffeta afternoon dress shown below. 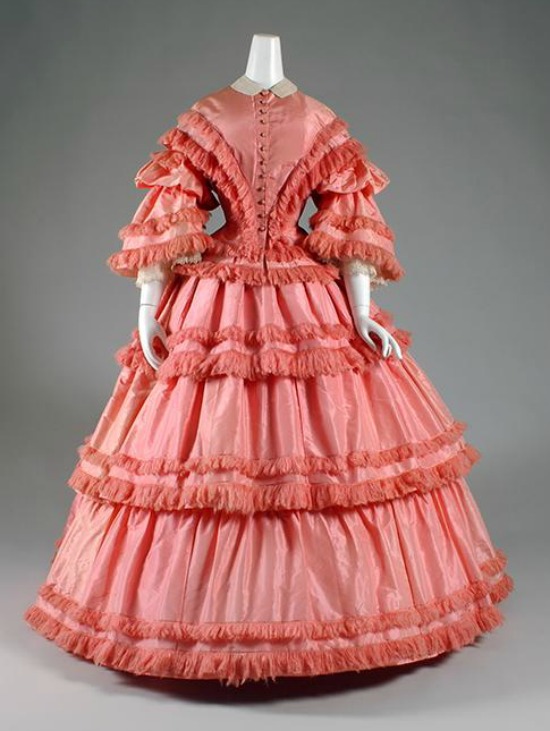 Darker pinks could be contrasted with other colors, such as white or black.  Black could be especially striking when worn with pink, but Littell’s Living Age is careful to warn that “black, although agreeable, is so positive a contrast, as to savor somewhat of the theatre.”  A harsh judgment indeed!  The below pink cotton dress employs black trim in what would have been an acceptable fashion. 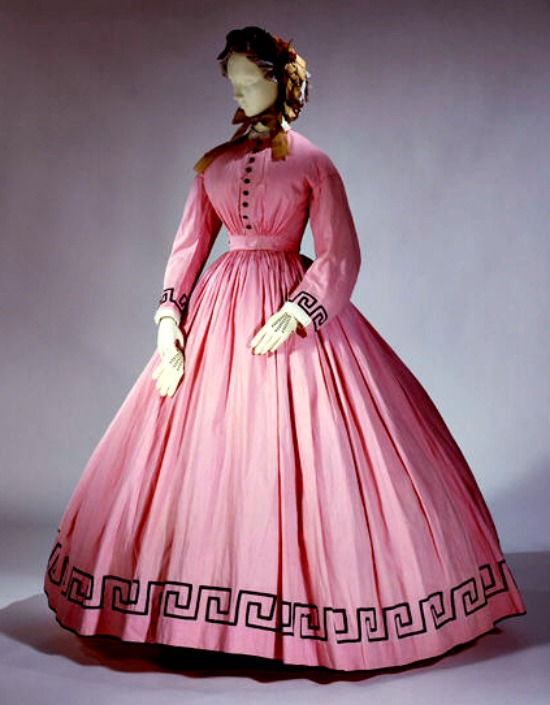 Pink and white was another popular color combination—especially for young ladies.  Pale pink roses and ribbons often adorned white ensembles, while pink and white stripes were regularly seen in summer day dresses and evening gowns.  The below dress of pink striped silk taffeta is one example. 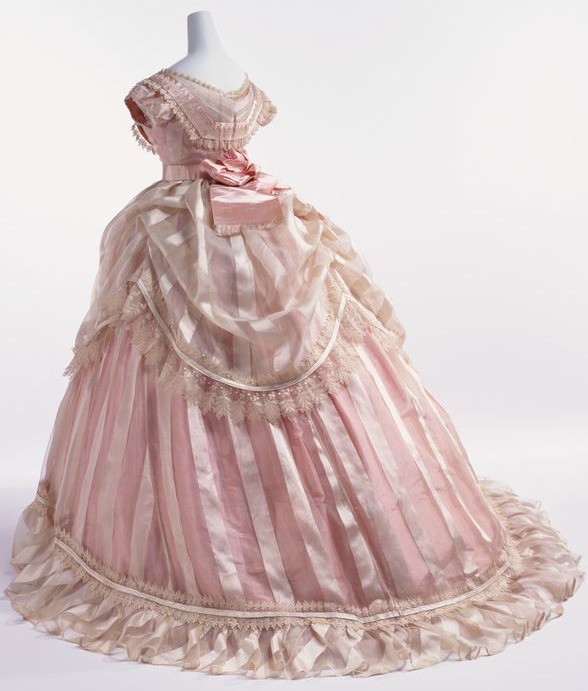 Pink paired well as a trim with other warm colors.  It looked particularly pretty with browns and tans.  The evening dress below is tan silk faille trimmed with pink. 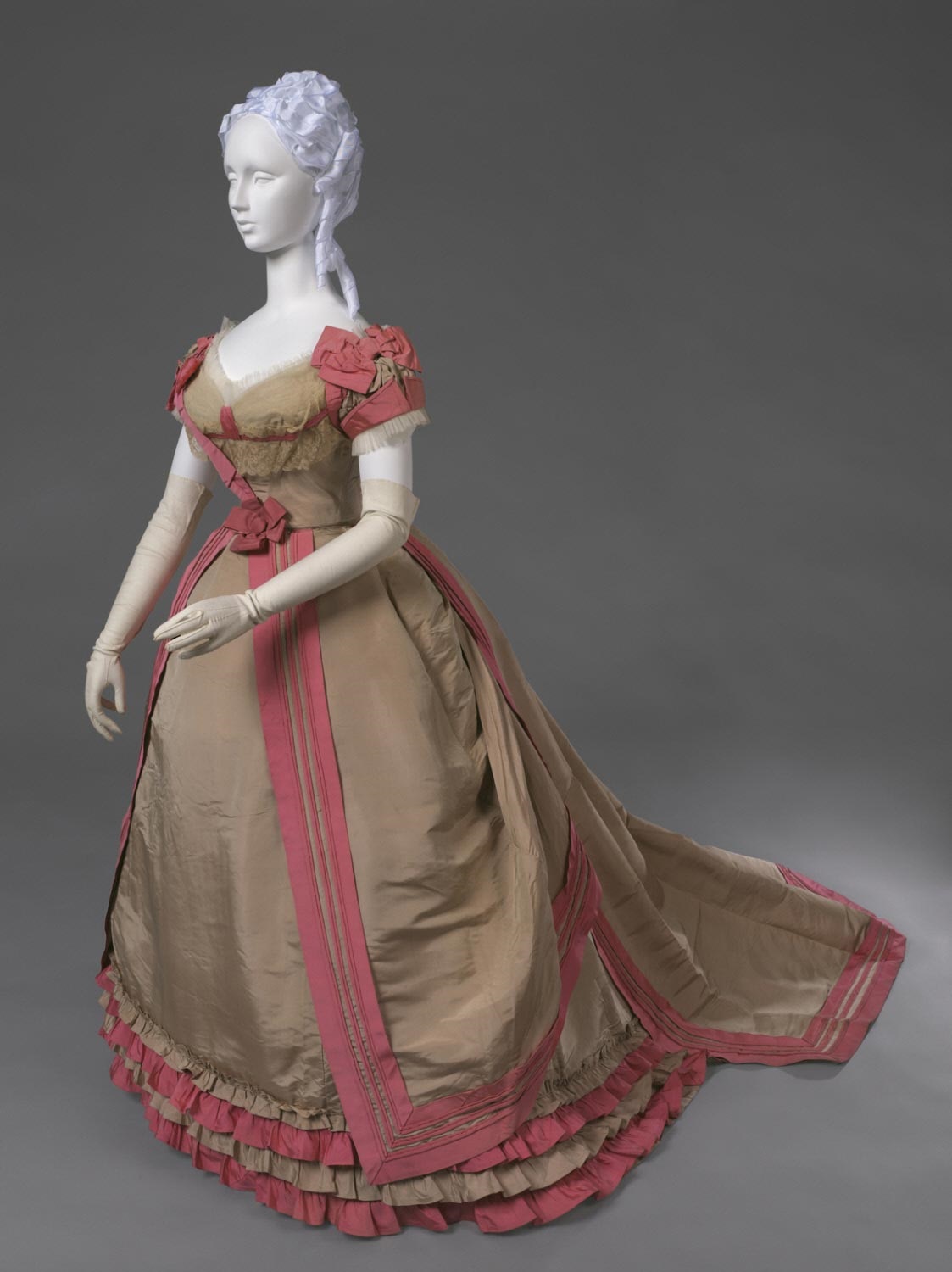 When pink was paired with a cold color, such as blue or gray, Littell’s Living Age advises that the cold color “should always predominate.”  This advice is illustrated perfectly by the dress below.  Made of green-blue silk, it is trimmed with pink ribbons and bows. 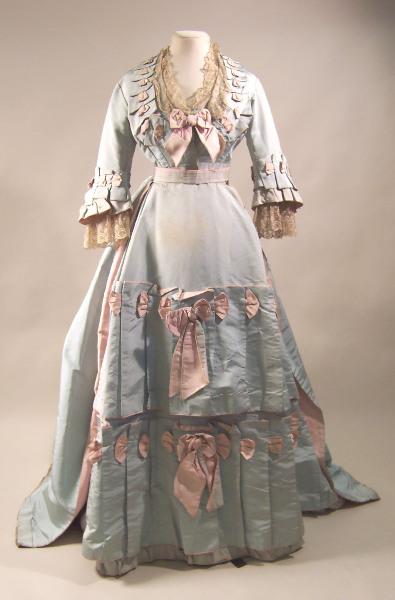 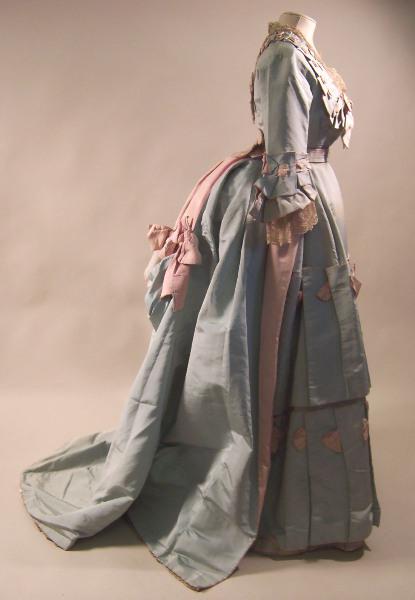 Pink accessories were quite fashionable during the Victorian era.  Pink slippers, pumps, and boots were also considered very stylish.  The silk evening pumps below are one example of how pink was used in Victorian footwear. 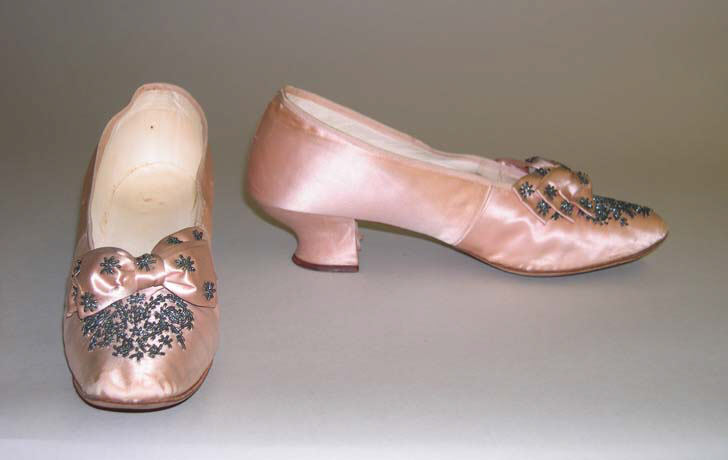 Pink boots could be worn for day, evening, and formal occasions—even weddings.  Below is a gorgeous pair of pink evening boots from 1870. 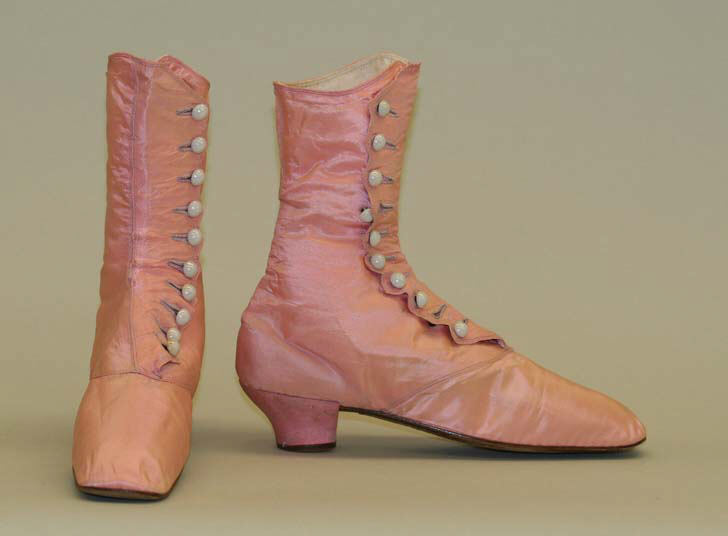 Pink ribbons, pink plumes, and pink silk flowers were popular trimmings for Victorian era straw bonnets.  The straw hat below features pink flowers, ribbons, and white plumes at the back. 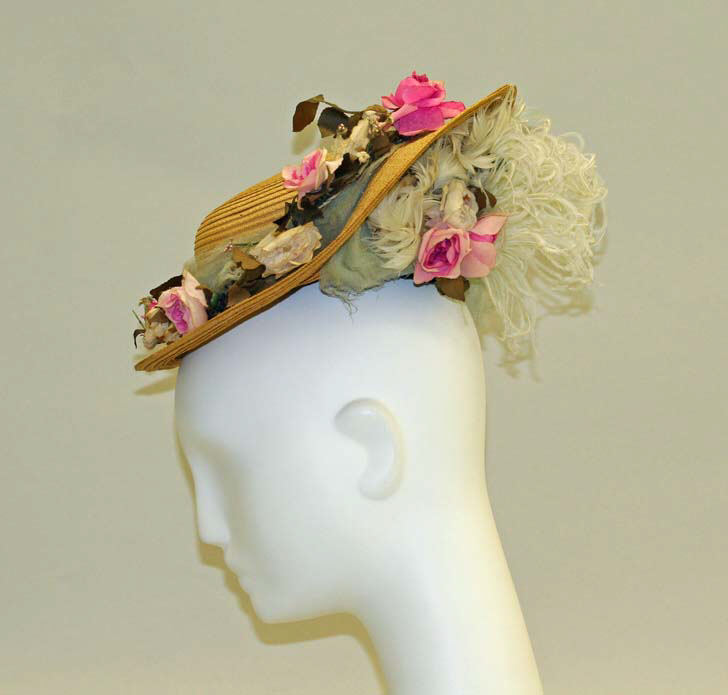 Pale pink was particularly pretty when combined with the lace on ladies’ indoor caps.  These sorts of caps were worn by matrons and spinsters throughout the 19th century.  Below is an 1880 lace cap trimmed with pink silk ribbons. 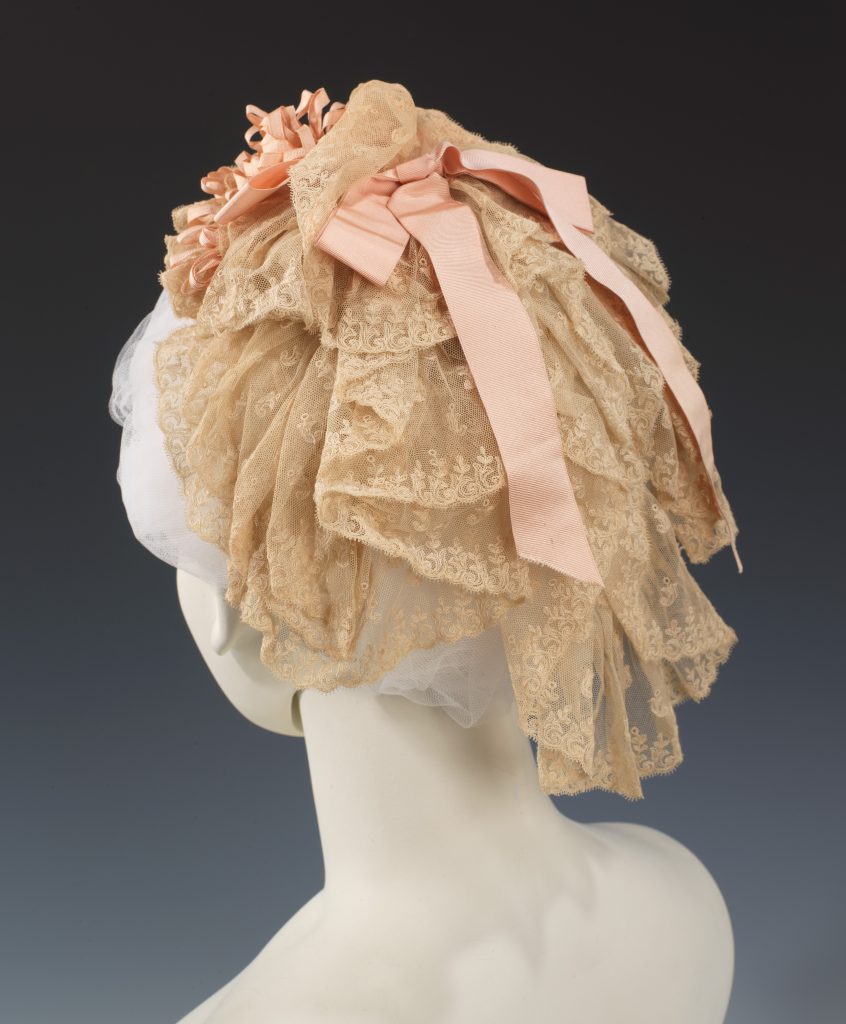 Pink parasols were another fashionable accessory.  They were generally made of silk and came in a range of shades, including pale pink and delicate pink prints.  Many of them were trimmed with lace, adding to their soft, feminine appeal. 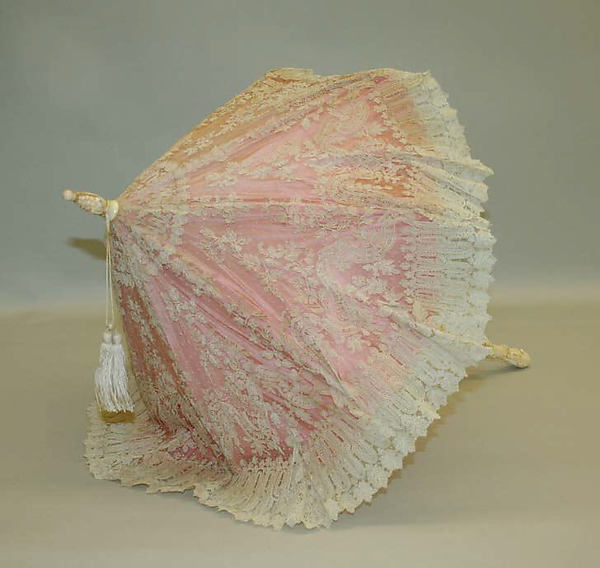 For evening dress, a soft, pink fan could be a lovely accessory.  In addition to painted paper fans, there were decadent feather fans like the one below.  Note the hummingbird drinking from the orange blossoms! 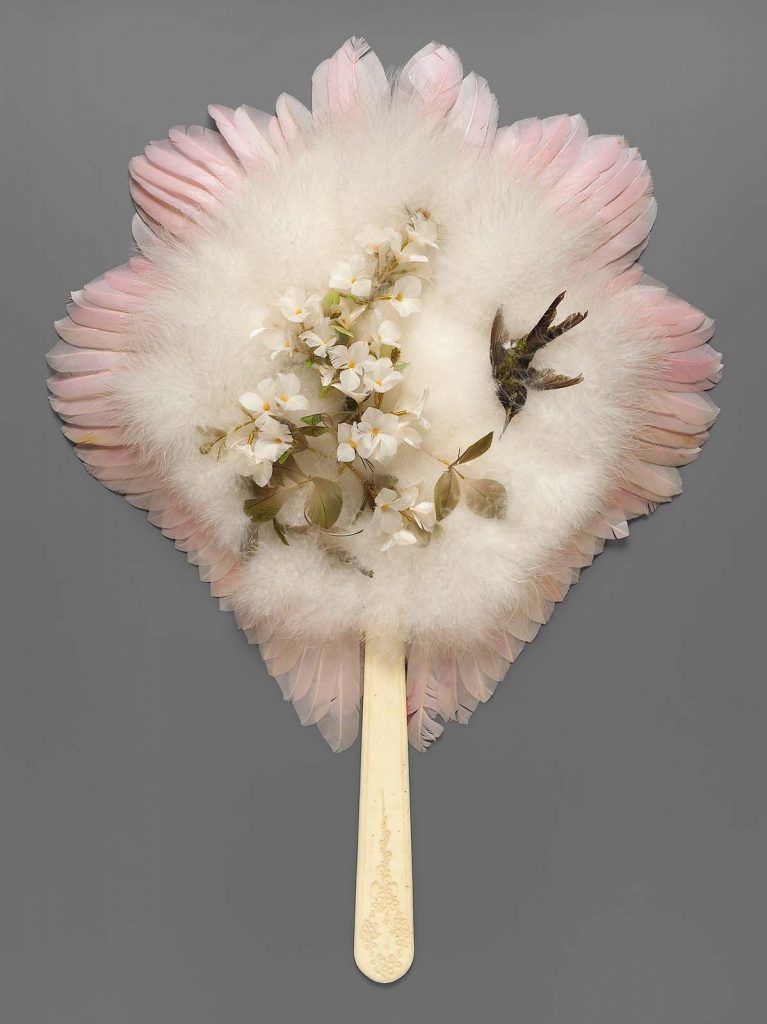 Pink jewels, like pink diamonds and pink sapphires, may sound like a modern fad, but they existed in the Victorian era as well.  Even more popular were necklaces, rings, and brooches made of pink topaz or pink conch pearls.  Conch pearls were highly prized during the 19th century.  In his 1886 book Pearls and Pearling Life, Edwin Streeter describes them as having a “wavy appearance and a peculiar sheen, something like that of watered silk.”  Most were irregular in shape.  Those that were perfectly round were exceedingly valuable.  They were used in all manner of jewelry, including brooches, rings, and even hatpins. 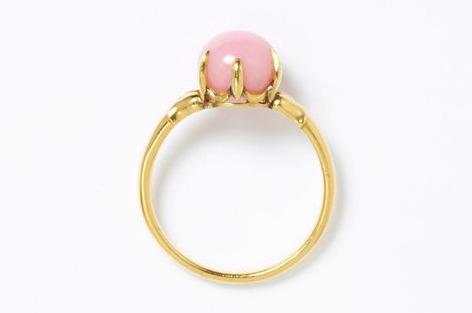 I hope the above has given you some idea of how shades of pink were used in Victorian women’s fashion.  For a refresher on the shades of Victorian fashion that we have already covered, the previous articles in my series are available here:

In future, I’ll be profiling other popular shades of the era. Until then, I leave you with the following quote from Littell’s Living Age:

“It is chiefly in the choice and arrangement of color that a woman’s taste in dress is displayed.” 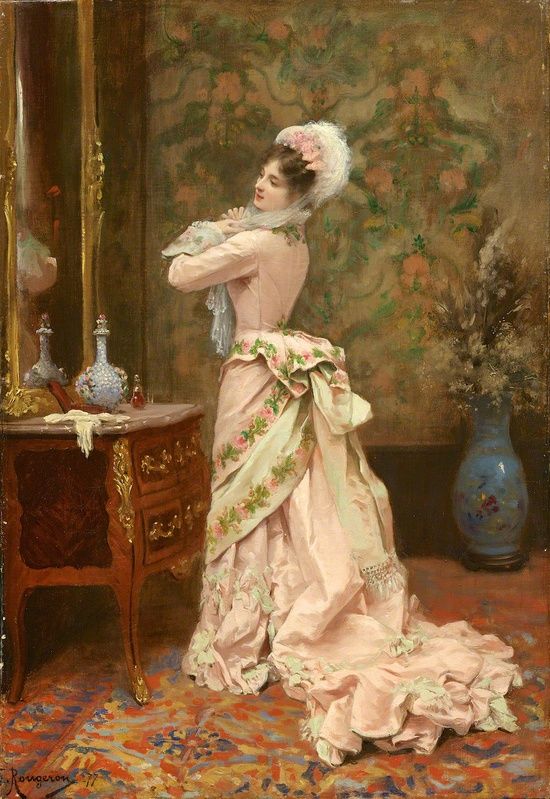