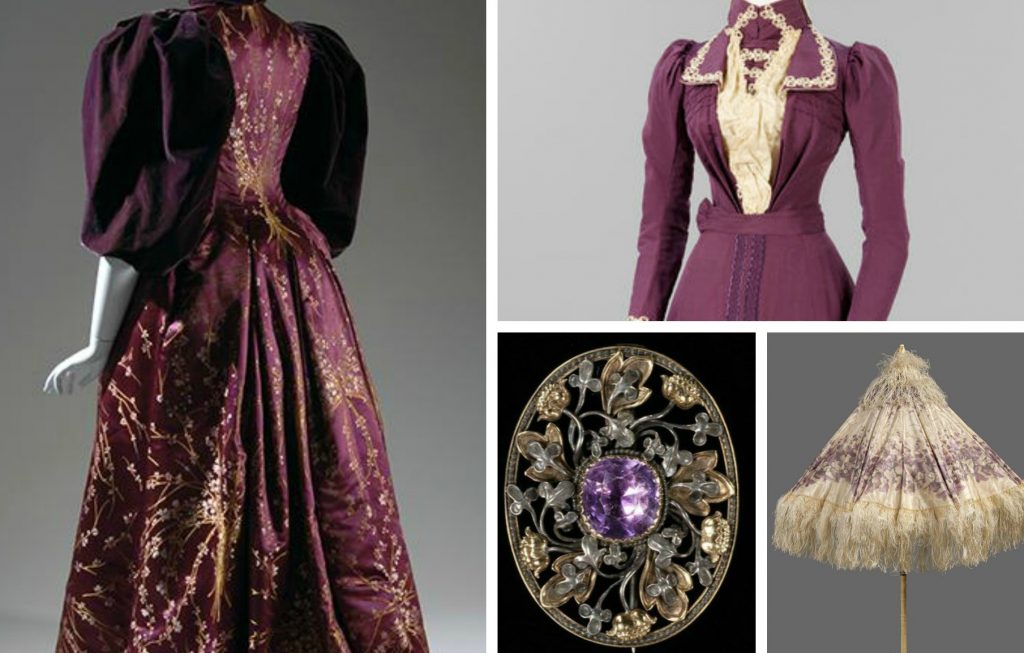 Individual Images via Museum at FIT, MFA Boston, and Victorian and Albert Museum.

Purple was one of the most fashionable—and versatile—colors of the Victorian era.  In fabric shades ranging from pale, delicate lilac to rich, deep plum, it was suitable for day dresses, visiting dresses, riding habits, and evening gowns.  It was also an acceptable color for those in half-mourning, with ladies frequently wearing dresses in shades of mauve-grey or lavender.  The 1856 invention of aniline dyes resulted in even more varieties of color.  Gowns and accessories were produced in violets, magentas, and brilliant berry hues.  In today’s article, we look at some of the loveliest examples of purple in Victorian fashion.

In his 1870 book Color in Dress, author George Audsley calls purple “the most retiring of all rich colors.”  It could be worn in winter, spring, or autumn and was considered to be particularly flattering to those with darker hair.  For those with fair, blonde hair, Audsley warns against the color purple, though he does allow that the lightest shades of lilac may be permitted if separated “by an edging of tulle, or similar trimming.”  The below dress looks like it may have fit the bill for a fair, Victorian blonde. 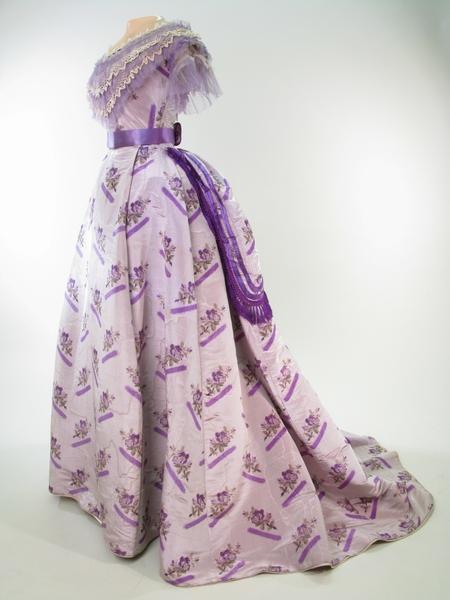 According to Audsley, purple harmonized well with a variety of colors, including gold, orange, maize, blue, black, white, and scarlet.  Lighter shades, like lilac, harmonized with gold, maize, cherry, scarlet, crimson, or combinations thereof.  One combination Audsley recommends is that of lilac, gold, and crimson.  You can see how beautifully this color combination works in the silk dress shown below. 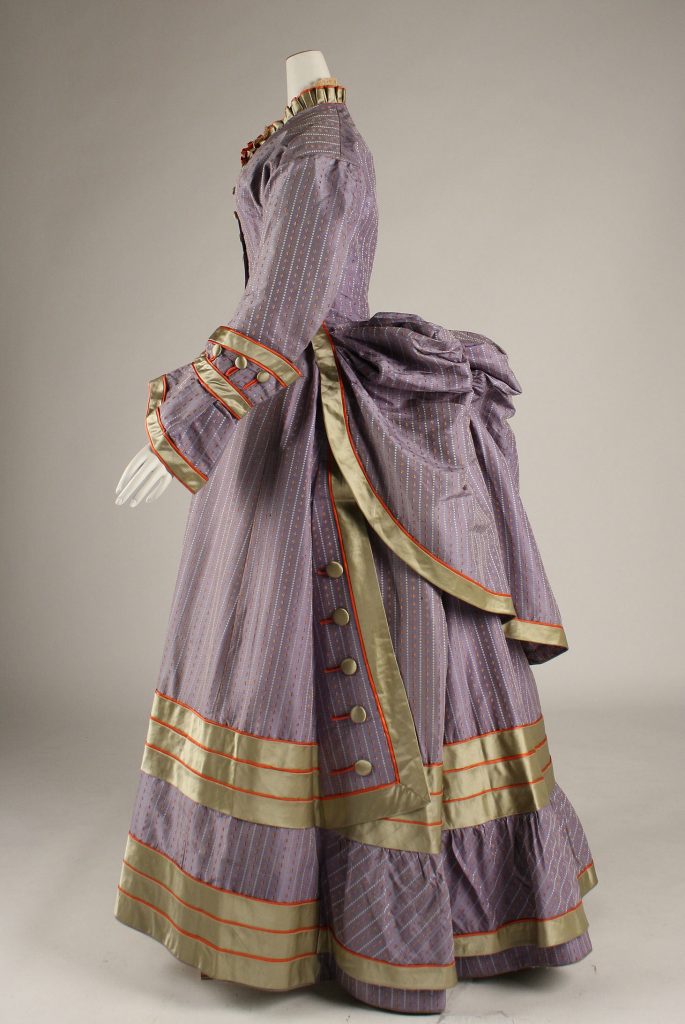 Some Victorian dresses were made of two or three different shades of purple.  This could be quite striking, as in the walking dress shown below.  Made of silk and cotton, it combines a dark purple with a medium grey purple.  From a distance, the buttons appear to be a shade of red (which Audsley would consider complimentary), but on closer inspection, you will see that they are, in fact, a berry-colored purple. 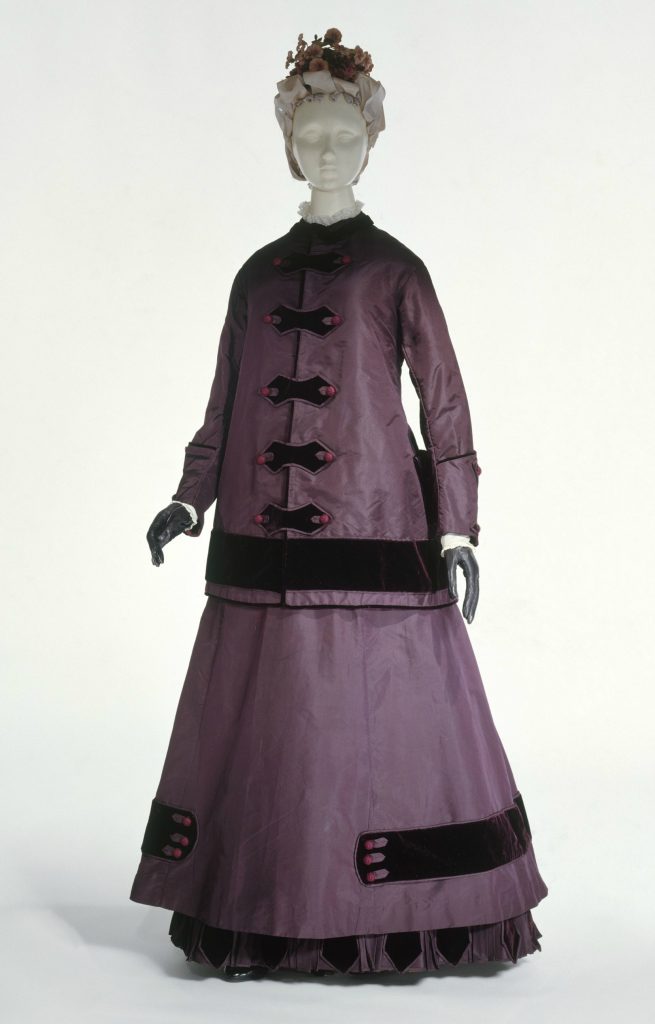 Rich purples were very fashionable for Victorian evening dress.  Generally designed in silks, satins, and velvets, they were made in shades of mulberry, magenta, and plum.  Below is one of the most stunning evening dresses of the era.  Made in 1894, it is comprised of magenta floral brocade, plum velvet, and yellow silk satin. 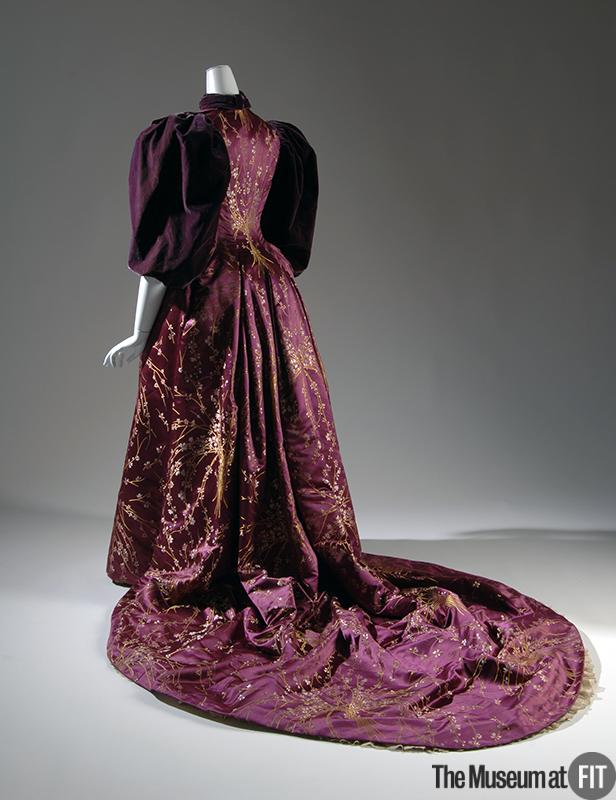 Audsley states that purple, as a color of mourning, was “expressive of gravity, sorrow, and sadness.”  But purple was not always grim.  In fact, it was occasionally used for Victorian wedding dresses.  The below wedding dress from 1899 is made of purple ribbed silk trimmed with lace and braid. 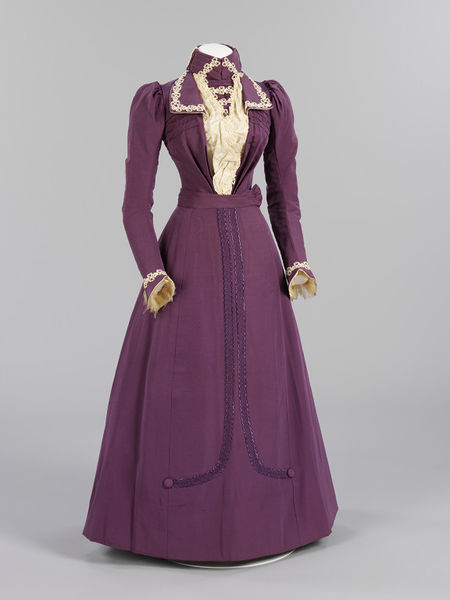 The Victorian era ended in 1901, but I cannot move on to purple accessories without sharing the following images of a purple silk tea gown from 1905.  This gown was designed by Charles Frederick Worth for the wife of American banker, J.P. Morgan, Jr. 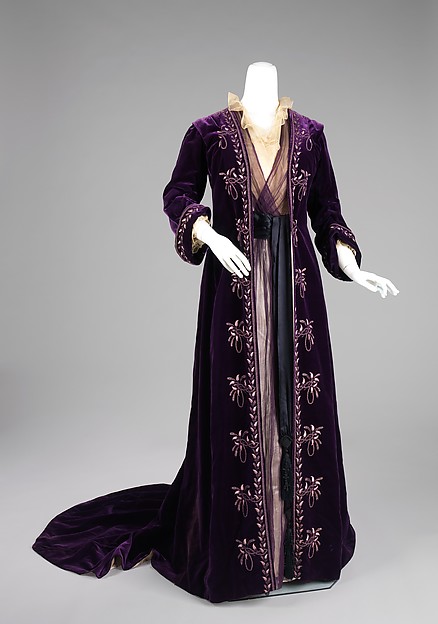 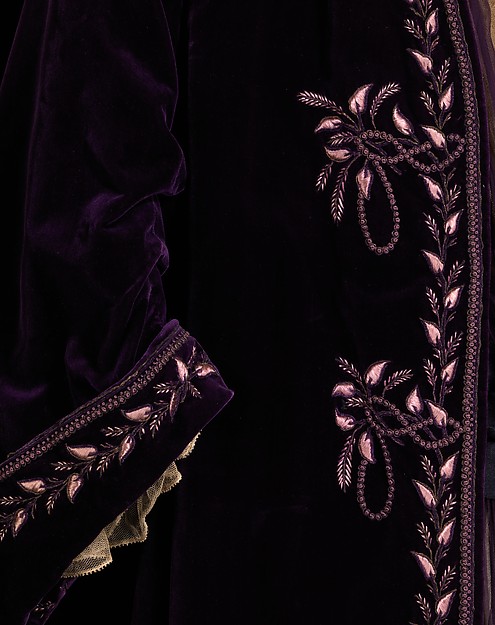 The color purple was not limited to ladies’ gowns.  Shades of purple also found their way into women’s accessories, including bonnets, parasols, gloves, fans, and jewelry.  Purple shoes could also be very stylish.  These brilliant purple panné velvet evening slippers are just one example. 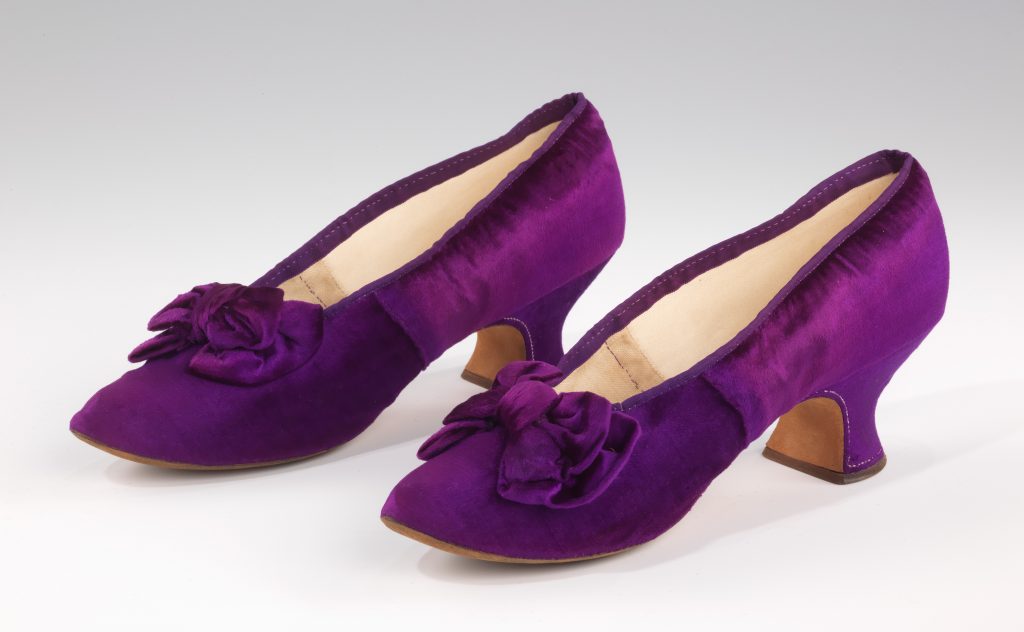 Victorian women’s boots can often be seen in lighter shades of purple, such as mauve, lavender, and lilac.  These colors were far more subdued for daywear than brighter berries and magentas.  Below is a pair of mauve satin boots from the 1860s. 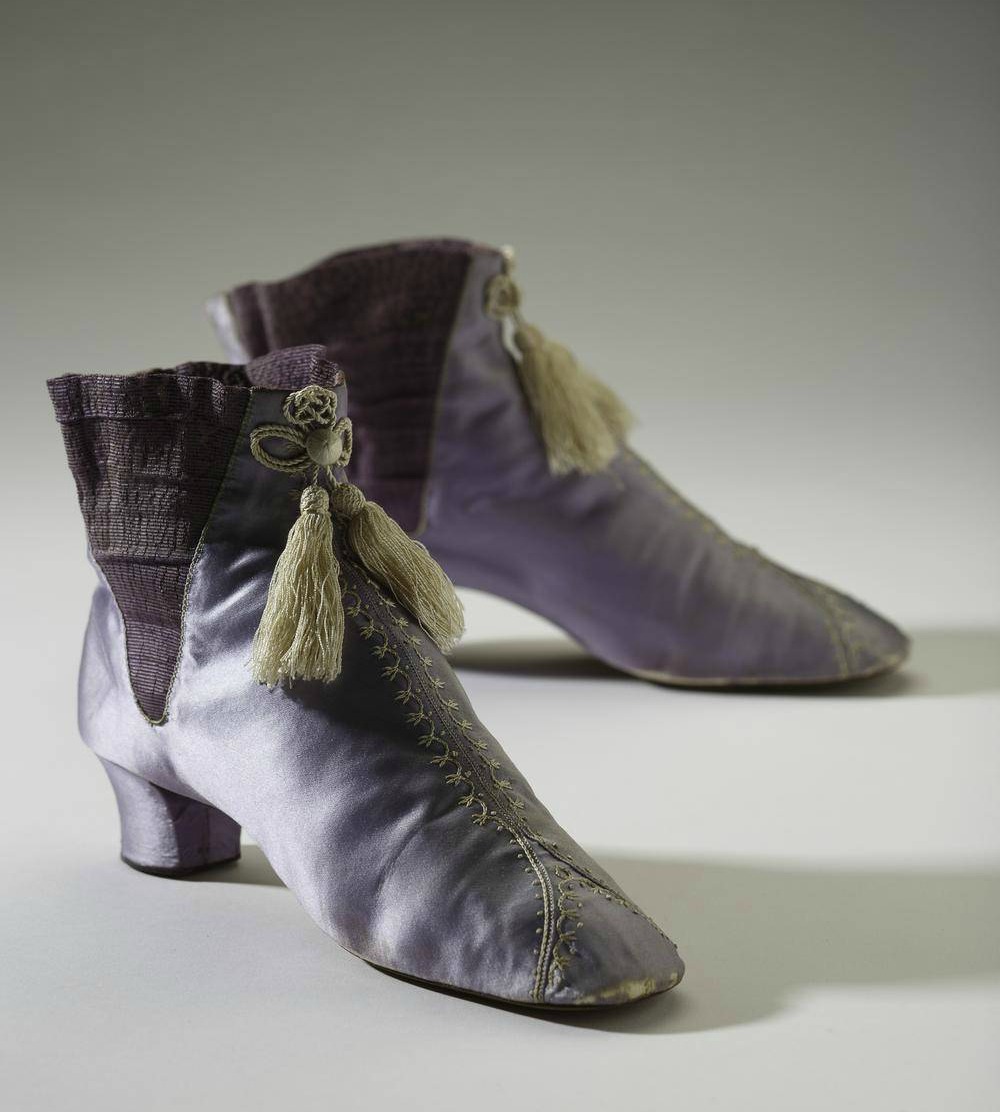 The 1900 edition of Good Housekeeping states that “a gaudy red, green, or purple glove is never in good taste.”  However, colored gloves in more subdued shades were popular throughout the 19th century.  These lovely lavender gloves from 1887 are just one example of an acceptable shade. 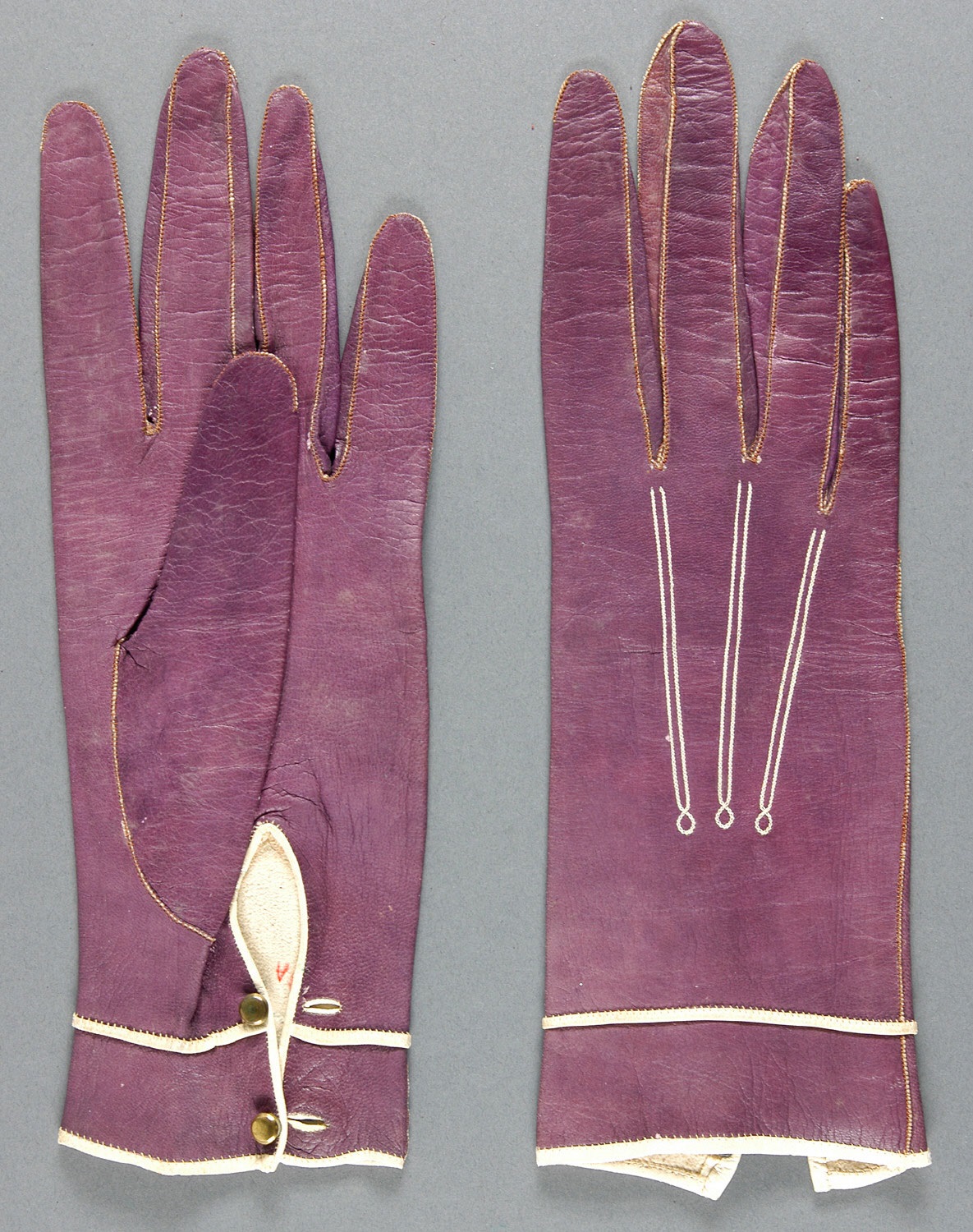 Purple ribbons or purple flowers were often used to trim Victorian era bonnets.  Some bonnets were solid purple, like the 1862 silk and velvet bonnet below. 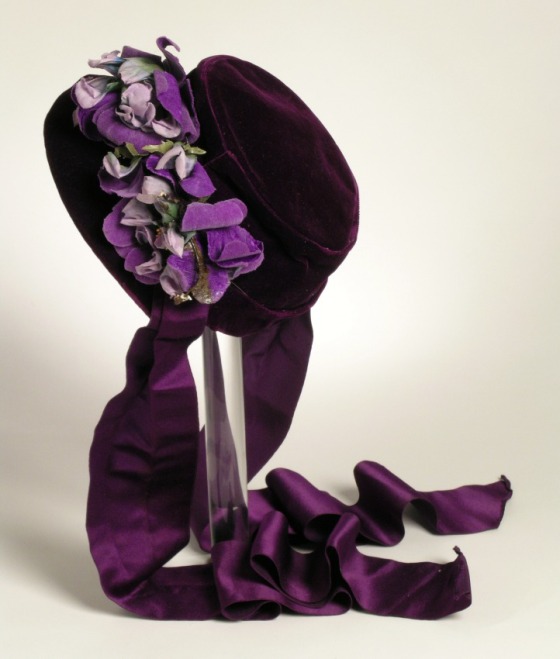 Purple parasols were another fashionable accessory.  Generally made of silk, they were available in shades of solid purple as well as in delicate prints and patterns.  On some parasols, purple was simply used as an accent color.  The below parasol from the early Victorian era is made of white, moire silk taffeta with a purple motif.  It is trimmed with white, crimped fringe. 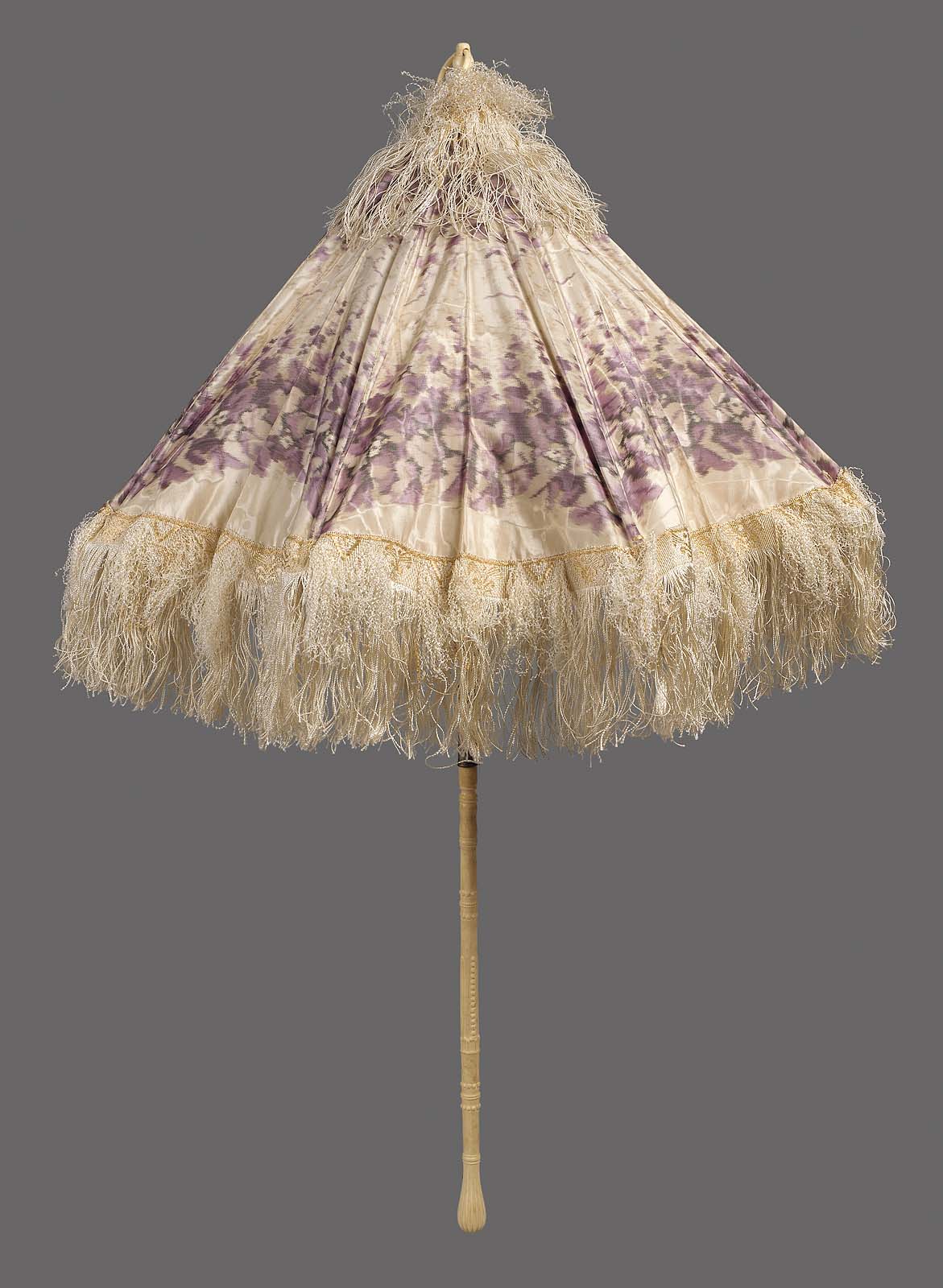 For an evening ensemble, a purple fan could be quite striking.  Fans came in a variety of styles.  There were painted fans, fans with watercolor pictures, and fans spangled with gold and sequins.  The below fan is made of purple silk satin with brass sequins, gold covered sticks, and mother-of-pearl. 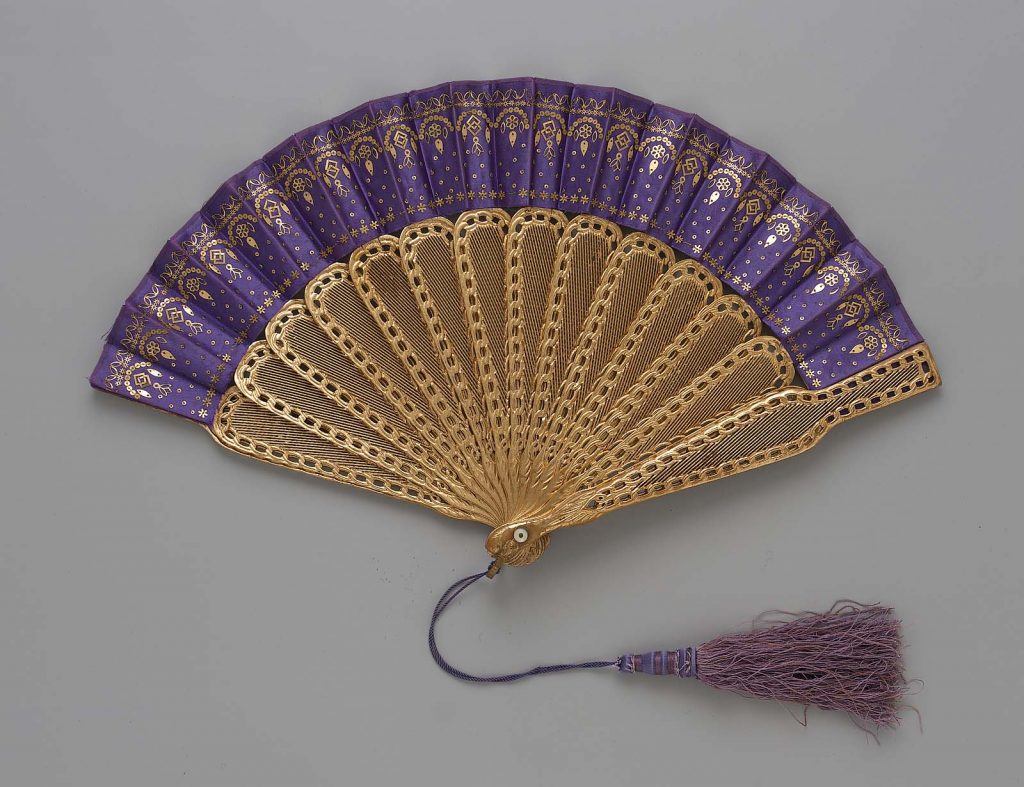 According to fashion historian C. Willett Cunnington, by the early 1870s, “gigantic fans” were all the rage.  The below fan looks to be one of the more conservatively sized fans from the late 19th century.  Made of sheer silk weave, it is designed with a pattern of purple violets and carnations. 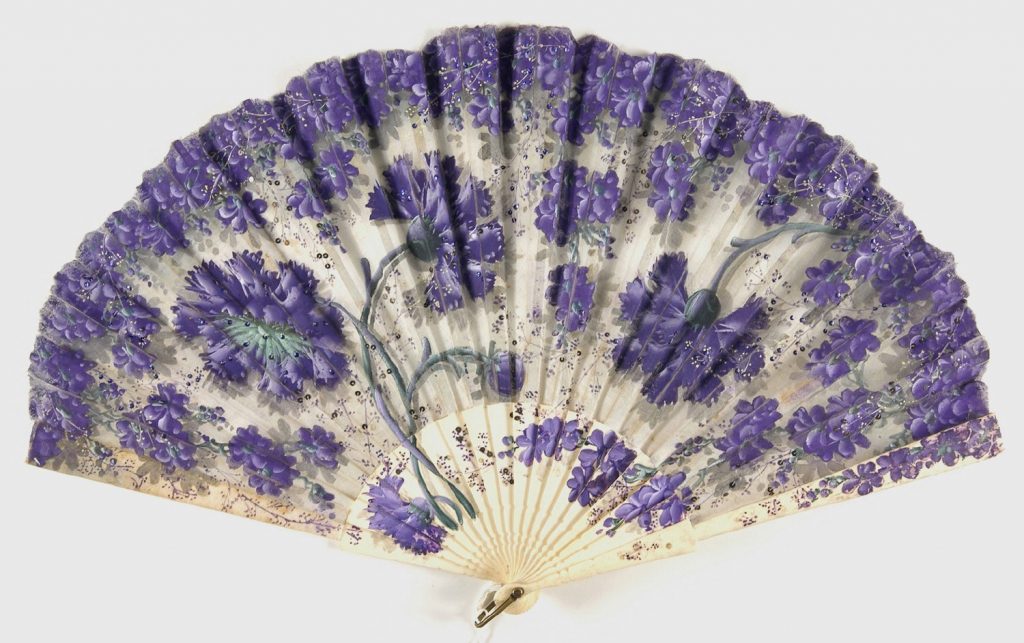 Jewels provided the finishing touch to any Victorian ensemble and, among purple jewels, the amethyst reigned supreme.  Below is an amethyst and gold bracelet given to Queen Victoria by the Duchess of Kent upon the queen’s engagement to Prince Albert. 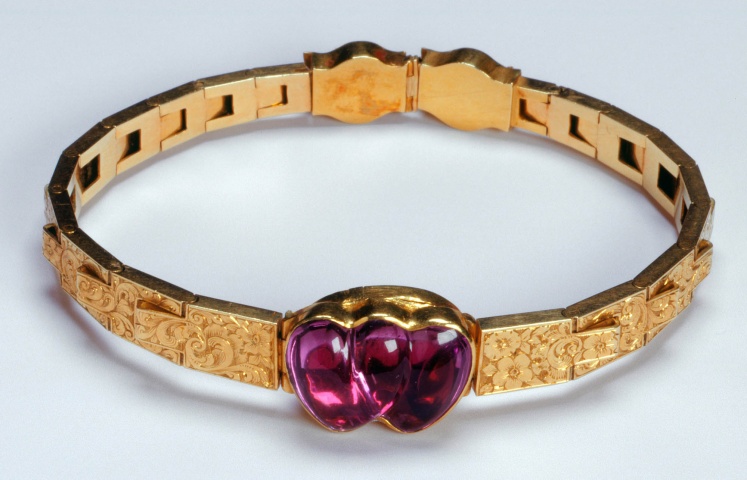 Amethysts were versatile stones.  In his 1856 book Jewelry and the Precious Stones, author Joseph Rupert Paxton states that amethysts showed best when set in necklaces.  They were also used in rings, brooches, bracelets, and hair combs.  Below is an 1885 amethyst brooch believed to have been designed by Edward Burne-Jones. 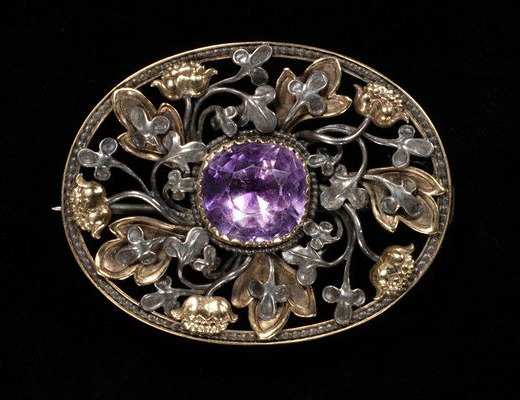 There is no one color that fully represents the Victorian era.  However, I hope the above has given you some idea of how purple was used in Victorian women’s fashion.  For a refresher on the shades of Victorian fashion that we have already covered, the previous articles in my series are available here:

In future, I’ll be profiling other popular shades of the era. Until then, I leave you with the following wise words on color from George Audsley:

“It is not the material worn, but the judicious choice of colors, which indicates the true lady.” 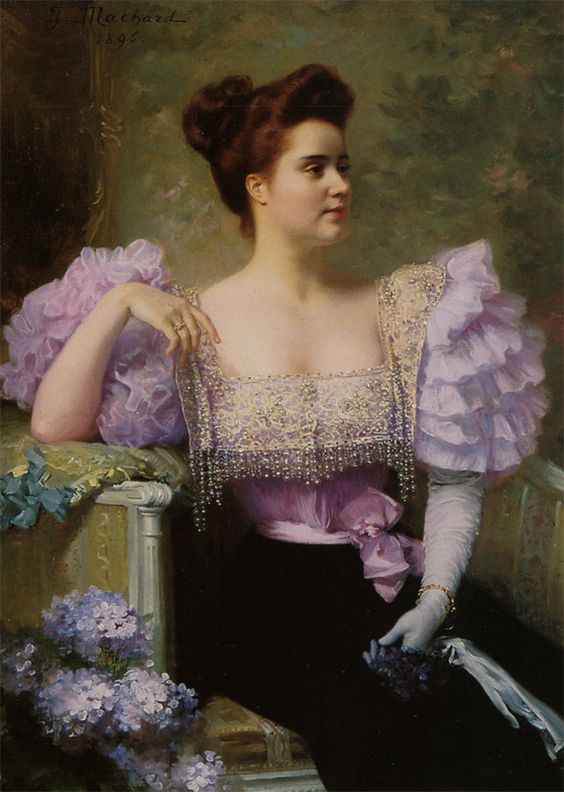