“It is during the summer months, when house holders leave town for their holidays, that poor pussy is forsaken and forgotten, and no provision being made for her, she is forced to take to the streets, where she seeks in vain to stalk the wily London sparrow or pick up any scraps from the gutter.”  The Book of the Cat, 1903. 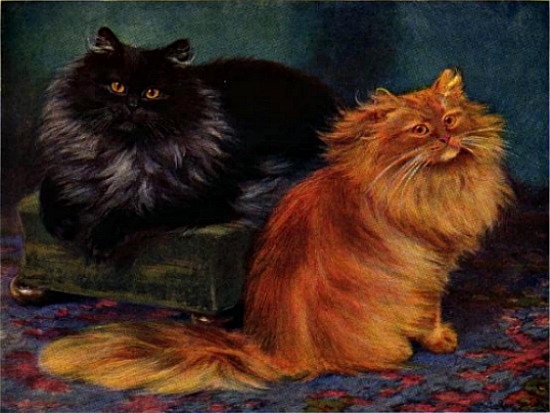 In the late 19th century, Victorian families embarking on their summer holidays often chose to leave their pet cat behind unattended.  This decision—likely motivated by the belief that, when left to their own devices, all cats will hunt for their supper—resulted in a profusion of half-starved cats wandering the streets in search of a handout.  The sight of so many cats in distress compelled some to take drastic action.  One lady in the west of England even went so far as to offer a holiday feline euthanasia service.  As a June 24, 1889 edition of the Gloucester Citizen reports:

“In a large town in the west of England there resides a lady executioner—for cats.  She announces to all her friends, and others whom it may concern, that at her hands poor pussies will meet with a speedy and painless death by chloroform.  Persons who are going away for the summer, leaving empty houses, are urged to send their cats to her, as a more merciful plan than leaving them to be half-starved during their absence.”

Admittedly, having a pet cat euthanized simply because one was leaving on vacation does seem rather extreme.  Wouldn’t it have been easier for Victorians to have paid a neighbor to stop in once a day and feed their cat?  In some cases, they did just that.  Alternatively, a caretaker hired to look after the house for the summer would also be tasked with looking after the family feline.  But these sorts of arrangements were not always successful.  In her 2013 book Beastly London, author Hanna Velten cites the observations of Victorian RSPCA secretary John Colam in explaining that:

“…feeding dependent cats was not included in servant’s ‘board wages’ (reduced pay when the owners were away), that cats were kicked out of the house when the owners left, and that servants and housemaids kept cats’ food for themselves, or forgot to feed them.” 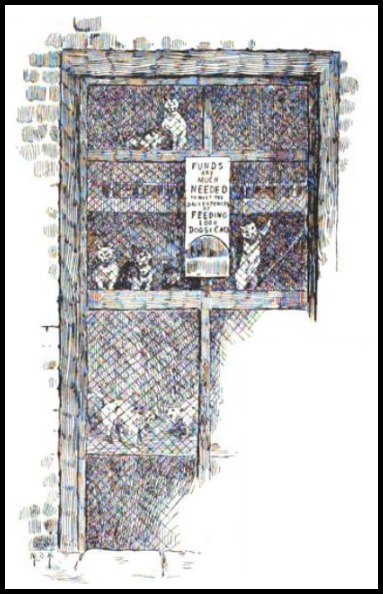 Fortunately, by the 1880s, there was another option for conscientious cat owners: the boarding house for cats.  In 1883, the Dogs’ Home at Battersea began accepting both stray cats and cats for boarding.  An 1884 edition of the Pall Mall Budget reports:

“The cats are taken en pension at a uniform rate of 1s. 6d. a week.  This charge would hardly be an appreciable addition to the cost of a holiday tour, but to the cats it would make all the difference between comfort and starvation.  Those who are not leaving London should specially petition their neighbors to avail themselves of the Home at Battersea, for prowling and starving cats are not a pleasurable addition to London in August.”

England was not alone in facing a seasonal epidemic of abandoned cats.  Americans were dealing with starving cats in the summer as well.  For them, cat boarding houses were an equally satisfactory solution.  An 1889 edition of Our Dumb Animals (published by the Massachusetts Society for the Prevention of Cruelty to Animals) states:

“‘What shall be done with ‘Tabby?’ is a serious question in many households.  Puss cannot be taken to the summer resort, because the hotel men will not have her around.  She cannot be locked up in the house, because she would starve to death.  A cat boarding house is the only recourse, and there Tabby is consigned.” 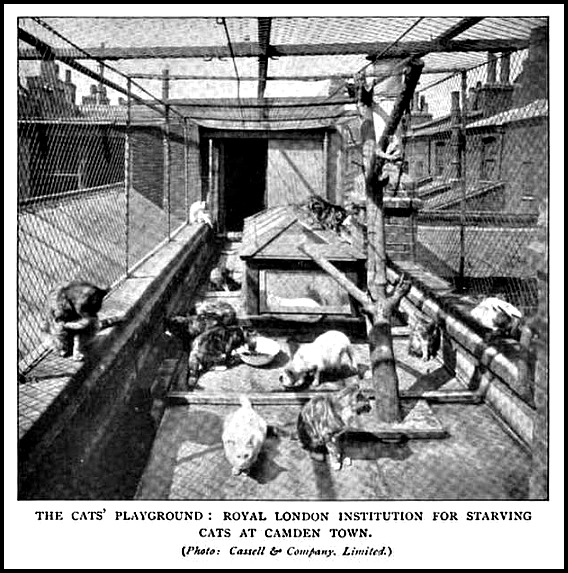 Cat boarding houses of the late 19th century were not always as structured as pet hotels or cat boarding facilities today.  In some, there were no individual cages or pens.  Instead, cats were kept communally inside of houses that had been converted to the purpose.  For example, Our Dumb Animals describes the cat boarding house in 1889 Boston as being situated inside of what was once an “aristocratic old mansion.”  As for the rest of the interior:

“The furniture and carpets are stored away in the garret, and rows of shelves, about eighteen inches in width, are arranged around the rooms for the accommodation of the pussies.  The cats are allowed the freedom of the entire house, but they cannot go out to meet their friends on the back fence.  Every possible convenience is made for the cats, the shelves they sleep on being covered with rugs and mats.  There are three rows of these shelves, and it is a case of first come, first served.” 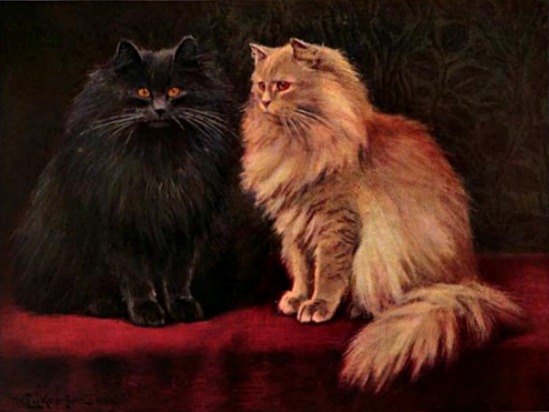 A similar cat’s boarding house existed in Paris in the 1890s.  A writer for the 1896 edition of the Temple Bar was obliged to leave his kitten, Czarina, there for two months when called away from Paris for the summer.  He describes his experience, writing:

“To take this timid, vivacious creature travelling was not to be thought of.  With many regrets and misgivings she was left at a cats’ boarding-house, where I paid for her at the rate of a St. Bernard dog, who would have had to be taken a walk daily, besides consuming pounds of meat, ‘because,’ I was told, ‘kittens are so difficult to manage.’  I heard that she pined at first, but having playmates and a tree to climb she consoled herself.”

In many cases, cat boarding was provided as an additional service at cat rescue homes.  In addition to the Cats’ Home at Battersea, there was the Home for Starving and Forsaken Cats at Gordon Cottage, Hammersmith (est. 1895) and the Royal Institution for Starving Cats in Camden Town (est. 1896), both of which offered cat boarding for a moderate fee. 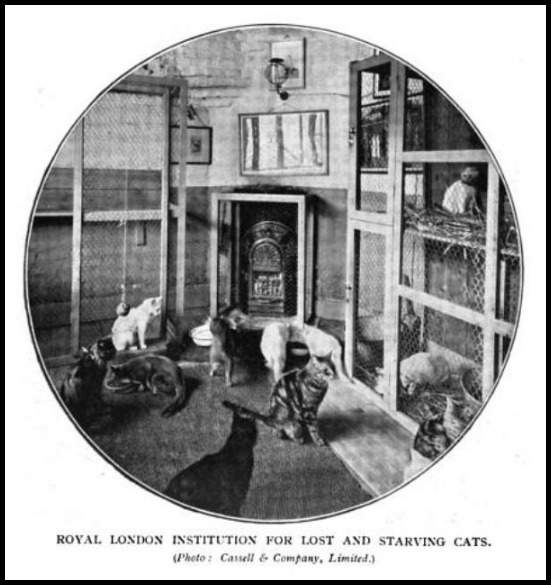 By the end of the century, cat boarding houses were becoming quite popular.  Unfortunately, the sight of a half-starved pet cat haunting the summer streets was still fairly common.  Describing London in the off-season, a lady’s column in an 1892 issue of the Freeman’s Journal states:

“A thin cat follows any stray pedestrian, craving attention in the homeless loneliness of the months when the family is out of town.  Let us hope that the days are past in which pussy was left to starve.  Most people arrange that the poor thing shall have food to eat, either in the silent kitchen, where there is now no company save that of the caretaker, or in one of the cat boarding houses that are becoming a feature of the age.”

Today, cat boarding houses and cat hotels are everywhere.  Nevertheless, there are some who still believe that a cat abandoned to her own devices for a few months will fend for herself.  In case it’s not clear from the article above, this belief is false. 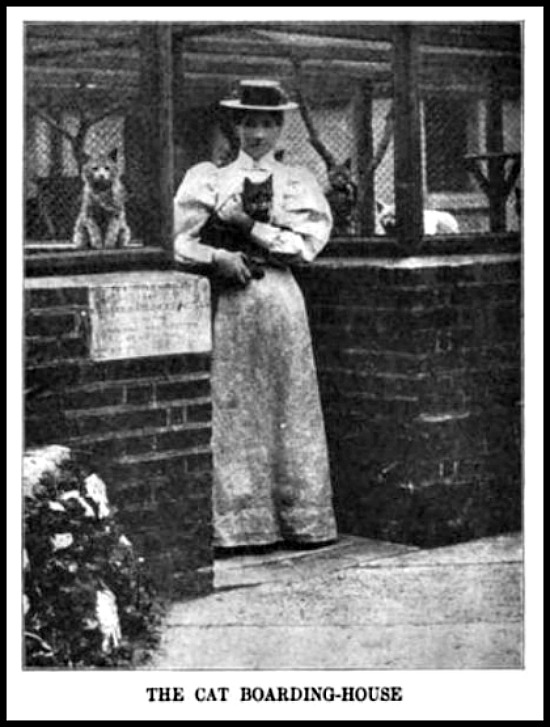 Thus concludes another of my Friday features on Animals in Literature and History.  If you are going on holiday this summer—or anytime—I urge you to make suitable arrangements for your pets.  If you would like to adopt a pet or if you are interested in donating your time or money to a rescue organization, I encourage you to contact your local animal rescue foundation or city animal shelter.  The below links may also be useful as resources:

“Summer Boarding House for Cats.”  Our Dumb Animals.  Vol. 22.  Boston: Massachusetts Society for the Prevention of Cruelty to Animals, 1889.