On Bluestockings and Beauty: 19th Century Advice for Educated Women

“Blue-stocking or not, every woman ought to make the best of herself inside and out.  To be healthy, handsome, and cheerful, is no disadvantage even in a learned professor.”
The Art of Beauty, 1883.

Portrait of a Woman by Henry Inman, 1825.
(Brooklyn Museum)

Unlike the clever, witty bluestockings that populated the fashionable salons of the 18th and early 19th centuries, the Victorian bluestocking was considered to be, as one 1876 publication puts it, “a stiff, stilted, queer literary woman of a dubious age.”  This unfortunate stereotype was so firmly entrenched that it even made its way into an 1883 edition of the Popular Encyclopedia, wherein a bluestocking is defined as a “pedantic female” who has sacrificed the “excellencies of her sex” to education and learning.

In her 1883 book The Art of Beauty, author Maria Haweis offers some well-intentioned, advice to these plain Jane academics.  As she reasons:

“It is one of the most potent objections to the cause of female education, that clever women go in for huge boots and Gampian umbrellas, setting at nought many graces essentially womanly and indispensable in woman: and the fact, which really has some truth in it, positively damages the cause.”

According to Haweis, an excess of education had the all too frequent side effect of turning attractive young ladies into unfashionable dowds.  She urges her female readers not to succumb to this unhappy transformation, writing:

“Recollect that you have a body, although exceptionally gifted with a mind: a little attention to it will neither nip your mental powers nor impede you as you clamber up the tree of knowledge.  Busy sisters, if you climb at all, climb gracefully, rather than bring the tree into disrepute.” 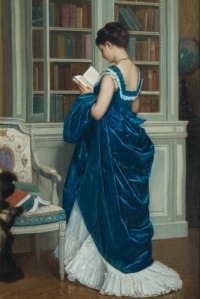 In the Library by August Toulmouche, 1872.

Later in the book, Haweis offers an unflattering example of the highly educated female.  She is described as “a mannish young lady,” of the sort which is a “hybrid between masculine and feminine.”  As Haweis states:

“Many are her ‘ologies’ — and were she a woman of extraordinary ability one might find excuse for her elbows and knees.  But I happen to have discovered that Dorothea knows much more on any subject, though she does not straddle across the paths, nor try to ape a man.”

The Dorothea mentioned by Haweis is described as quiet, “sweet-faced,” and charming—a girl that seldom says a word and “has always men around her.”  In short, an ideal manner of Victorian female.  That is not to say that Dorothea is a nitwit.  She is, in fact, intelligent and even seems to have some level of education.  But the essential point of her character (at least as far as Haweis’ example) is that she does not flaunt her intelligence and she is never so strong-minded as to be accused of aping a man.

Based on some of Haweis’ wrongheaded remarks, one might think she was against education for women.  Quite the contrary.  For unattractive girls (referred to, rather unkindly, as “Nonentities”), Haweis asserts that education is absolutely essential.  Addressing the “Nonentity,” she writes:

“To her I have but one word to say: educate yourself…books are so cheap, and your leisure probably so large that there is little to prevent an effort to redeem lost time.” 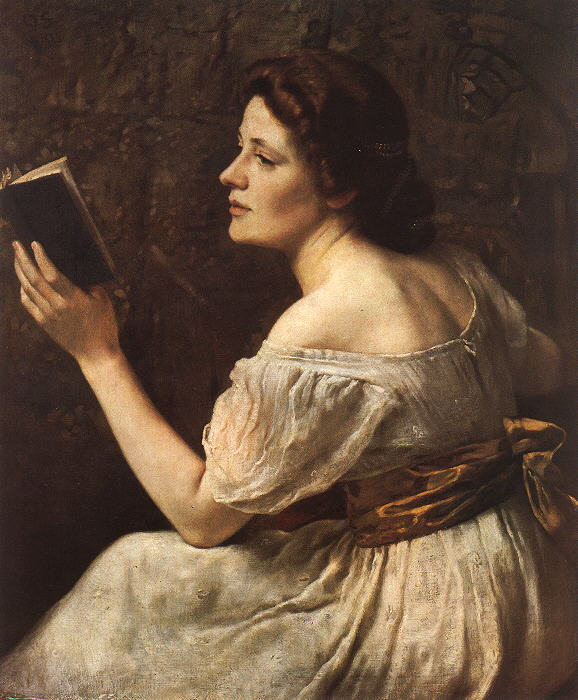 Despite her advice to nonentities, Haweis is very clear that outward beauty is a woman’s most important asset.  To this end, she is unwilling to believe those bluestockings who claim not to care what they look like, writing:

“No woman can say truthfully that she does not care whether she is pretty or not.  Every woman does care.  The immutable laws of her being have made physical attractiveness as much a natural glory to her as strength is to a man…After all, what is vanity?  If it means only a certain innocent wish to look one’s best, is it not another name for self-respect—and without it, what would woman be worth?”

The idea that a woman’s worth stems from her outward appearance is not exclusive to the Victorian era. However, the notion that beauty and intellect are somehow incompatible in women is something which we definitely see more of in the 19th century. That’s not to say that the beliefs of those like Haweis were the norm, only that the stereotype of the unattractive bluestocking was very much a reality.