“In Germany the children believe that the Easter hare places eggs and other presents in the baskets they leave outside the nursery on the eve of Easter.”  The Cornishman, 1892.

Though the origin of Easter eggs and Easter bunnies can be traced back to ancient times, the Victorians did not begin to celebrate Easter in the way that we know now until the late 19th century.  It was then that Easter bunnies became fashionable.  Before the 1880s, however, it was in Germany—not in England or the United States—that children believed in the “Easter hare.”  As American author Linda Beard states in her 1893 book How to Amuse Yourself and Others:

“In Germany, too, we should find that children believe as sincerely in the Easter hare as they do in Santa Claus in our country; and the saying, that ‘the hares lay the Easter eggs,’ is never doubted by the little ones.”

Belief in the Easter bunny may have been a little slow in getting started in the United States and England, but by the 1890s, Beard reports that it was not uncommon to see an image of a “hare wheeling his barrowful of eggs” displayed in the confectioners’ window.  Easter eggs were dyed and decorated, and according to an April 1893 edition of the Tamworth Herald:

“…if you tell the nursery folk that an Easter-bunny brings the eggs and hides them in the garden or the nursery, where they may be hunted, you surround them with an air of special grace and favour.”

Newspapers of the late 19th century featured advertisements for decorative Easter cards and Easter eggs made of every material one can imagine.  As the Tamworth Herald reports:

“There are eggs of polished and of inlaid wood; there is our old friend the satin-egg, hand-painted (would that it were not!), and embellished with cheap tinsel and cheaper lace; there is the egg of china and of glass, and, of course, there is the egg made of sugar or of chocolate which looks as if it might be good to eat.” 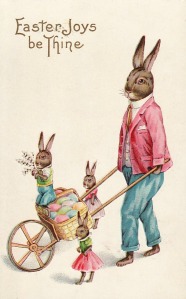 Perhaps the most unique variety of fashionable Easter egg in 1893 was the one made of plain, hinged wood that, when opened, revealed an interior bursting with rosebuds, violets, and other spring flowers.

For those of simpler taste—or more moderate means—plain eggs boiled and dyed were the most popular Easter eggs of all.  Onion peel added to boiling water would dye an egg terracotta brown.  A spoonful of aniline dye would tint an egg “a fashionable, but unbeautiful” magenta.  And if one wanted to dye their Easter eggs a “lovely ebony-black,” the Tamworth Herald advises boiling them in a mixture of young rye and water.

By 1897, commercial Easter egg dyes were also available.  In fact, Donnell Manufacturing, a St. Louis based company, was the first to capitalize on the German myth of the Easter hare by using colored lithographs of four white rabbits and eight colored Easter eggs to advertise their White Rabbit Easter Egg Dye—which included directions in both German and English.  Their idea caught on like wildfire and it wasn’t long before imitators sprang up throughout the country.

Savvy marketing, like that employed by Donnell Manufacturing, was not the only influence on the rise in popularity of the Easter bunny.  By the end of the century, many German immigrants had brought the tale of the Easter hare along with them to their new homelands.  For example, an 1899 American magazine reports the story of Frau Zehner who was known as the “Rabbit Woman” of New York.  Zehner was a German born street peddler who made a tidy profit each Easter by selling “little bunnies” in every imaginable color.

By the turn of the century, confectioners were making chocolate bunnies and Easter cards were featuring rabbits on their covers.  Soon, images of rabbits at Easter were almost as common as images of Easter eggs themselves.

Today, the Easter bunny is an inextricable part of the Easter festivities in England and America.  In many ways, he is as much a holiday icon as Santa Claus.  Obviously he is not real, but as March 27 is Easter Sunday, I hope you do not mind that I have included him as part of my Animals in Literature and History series.  To those who celebrate it, I wish you all a very Happy Easter weekend with your family and friends, both human and animal.  As for myself, I will be spending Easter with my own family, complete with Easter eggs and Easter bunnies (of the chocolate variety!). 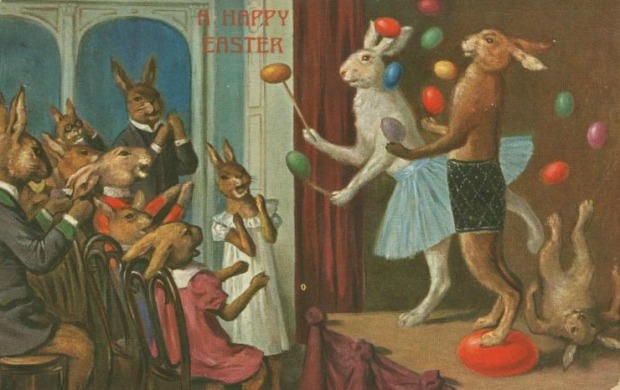 Thus concludes another of my Friday features on Animals in Literature and History.  If you are interested in helping a rabbit in need or would like to adopt a rabbit of your own, the following links may provide a starting point:

*Author’s Note: Sunday is Easter and in some places this means baby bunnies, chicks, ducklings, and kittens will be sold or given away as Easter presents.  Baby animals are very cute and I understand the temptation to put one in a child’s Easter basket, however, I hope that before you do so you will first consider the long-term commitment to the baby animal’s health and welfare.