In his 1825 novel, The Talisman, Sir Walter Scott famously refers to the Scottish Deerhound as “a most perfect creature of heaven.”  A truly noble and majestic breed, the purebred Scottish or “Scotch” Deerhound was a rarity outside of Scotland throughout much of the 19th century.  Those that did reside in England lived under the auspices of Queen Victoria.  Early in her reign, she had a favorite Scottish Deerhound named Hector (seen in the above portrait by Landseer).  By the 1870s, there were several Scottish Deerhounds at Windsor Great Park.  And by the end of the century, the Scottish Deerhound Club was established under the queen’s patronage.

According to an article in an 1870 edition of The Graphic, the Deerhounds at Windsor Great Park were “the only true Deerhounds in England.”  They were employed at Windsor for catching fawns and for assisting in the capture of  red deer that would be sent on to Swinley Paddock for stag hunting.  On occasion, they were even used to “secure the wounded deer that had got away.”  As the article reports:

“Like all pure-bred dogs they are obedient to the voice of the keeper, and do their work in an intelligent and orderly way, as befits dogs of genteel education, and they take to their business naturally like hereditary legislators.”

Not all of the Deerhounds at Windsor Great Park were natural born hunters.  According to the article, deer hunting was done by “sight and not scent” and, in some young dogs, the instinct was slow to develop.  One particular Scottish Deerhound at Windsor, who went on to become “a first-rate dog,” refused to follow his “natural vocation” until he was two years old. 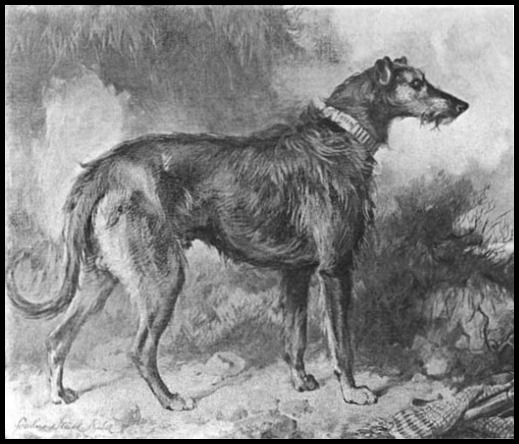 Bran, Illustration from Scotch Deerhounds and their Masters, 1894.

Hoping to improve the breed, Mr. Cole, the head deer and gamekeeper at Windsor Great Park, frequently crossed the Scottish Deerhounds in residence with other breeds of dogs.  As the article in The Graphic reports:

“A very useful cross is obtained with a good big greyhound, but after the first cross the quality deteriorates.  Useful crosses are also obtained with the Talbot, or so-called bloodhound, the mastiff, Cuba mastiff, bulldog, foxhound, and the colley [sic].”

A decade later, an even better cross was to be achieved.  In 1880, the Russian Czar made a gift to Queen Victoria of two “magnificent Russian wolfhounds.”  In his 1894 book Scotch Deerhounds and their Masters, author George Cupples writes:

“…after which — by Mr. Cole at Windsor Great Park, and by the head forester at Balmoral — the said ‘breeding expedient’ was begun and continued, with a decisive success that has been often manifested since then in the deer-stalking feats which dogs of this strain have performed under H.R.H. the Prince of Wales and the Duke of Edinburgh, when engaged in Highland forest-sport.”

The above illustration depicts the Scottish Deerhounds who lived at Windsor Great Park in 1870.  The Graphic lists their names as follows:

“The large hound in the foreground to the right, is Caird, the sitting hound facing him is Mark, the other hounds at the back, beginning at the right hand, are Strath, Hag, Swankey, and Keildar.  Of these Caird, Hag, and Keildar, are winners of prizes at various shows.”

Despite its increase in popularity, the Scottish Deerhound was never as common in Victorian England as other hunting breeds, such as the Foxhound or the Greyhound.  Throughout the century, it remained an elegant, noble creature, more likely to be possessed by royalty or those in the upper echelons of society than by the average huntsman.

Lufra, Illustration from Scotch Deerhounds and their Masters, 1894.