Cat Funerals in the Victorian Era

During the early 19th century, it was not uncommon for the mortal remains of a beloved pet cat to be buried in the family garden. By the Victorian era, however, the formality of cat funerals had increased substantially. Bereaved pet owners commissioned undertakers to build elaborate cat caskets. Clergymen performed cat burial services. And stone masons chiseled cat names on cat headstones. Many in society viewed these types of ceremonies as no more than an amusing eccentricity of the wealthy or as yet another odd quirk of the elderly spinster. Others were deeply offended that an animal of any kind should receive a Christian burial.

In March of 1894, several British newspapers reported the story of a Kensington lady “of distinction” who held a funeral for her cat, Paul.  An article on the subject in the Cheltenham Chronicle states:

“Except that the Church did not lend its sanction, the function was conducted quite as if it had been the interment of a human person of some importance.  A respectable undertaker was called in, and instructed to conduct the funeral in the ordinary way; the body was to be enclosed in a shell which would go inside a fine oak coffin.  There were the usual trappings, including a plate on which was inscribed the statement that ‘Paul’ had for seventeen years been the beloved and faithful cat of Miss —, who now mourned his loss in suitable terms.  The coffin, with a lovely wreath on it, was displayed in the undertaker’s shop, where it was an object of intense interest and not a little amusement.”

Though Paul’s burial service was not sanctioned by the Church, this did not stop other cat funerals from adopting a religious tone.  An 1897 edition of the Hull Daily Mail reports the story of a clergyman who held a funeral for his cat.  This particular cat is described as an obese, black and white female who was known to go for walks with her master.  Upon her death, the clergyman and his household were “thrown into mourning.”  The Hull Daily Mail reports:

“For three days pussy, whose remains were placed with loving care in a beautiful brass-bound oaken coffin, with inner linings of silk and wool, lay in state in the drawing-room.  At the termination of this period, the rev. gentleman hired a cab, drove to the station, and took a train for the North, bearing with him the oak coffin and the precious remains.  Where the funeral took place seems to be somewhat of a mystery – at least there are conflicting accounts – but of one thing people seem to be certain.  The ceremonial respect which had been accorded to the deceased was maintained to the last, and the burial service, or part thereof, was recited at pussy’s grave.”

The majority of historical reports on cat funerals from the Victorian era are recounted with humor.  Others show a darker response to pet burials.  A September 1885 article in the Edinburgh Evening News relates the story of an “old old woman” in Abercromby Street intent on giving her deceased cat, Tom, a “decent burial.”  She applied to the local undertaker to build Tom a suitable coffin and employed a gravedigger, by the name of Jamie, to dig a grave for Tom in the local burying ground.  As the article states:

“…the funeral, which took place in the afternoon yesterday, was largely attended.  Miss — carried the coffin, and on the way to the graveyard the crowd of youngsters who followed became exceedingly noisy, and being apprehensive that the affair would end in a row, ‘Jamie’ closed the iron gate with the view of preventing any but a select few from entering.  The crowd, however, became even more excited, scaled the wall, hooting and yelling vociferously, crying that it was a shame and a disgrace to bury a cat like a Christian.”

Whether this uproar was truly a result of outrage over Tom being buried “like a Christian” or simply an excuse for rowdy youths to misbehave is unclear.  Regardless, the results of the riot that ensued were exceedingly unpleasant for Tom’s elderly, bereaved owner.  The Edinburgh Evening News reports:

“The coffin was afterwards smashed, and the body of the cat taken out, and ultimately the uproar became so great that the police had to be called to protect the gravedigger and the old lady.  The latter managed to get hold of the dead body of Tom, and with the assistance of Constables Johnston and Smith escaped into a house in the neighborhood, where she remained for some time.  In Abercromby Street, where she resides, a number of policemen had to be kept on duty till a late hour in order to protect her from the violence of the crowd.”

Perhaps the main cause of outrage lies in the fact that Tom’s owner was attempting to bury a cat in the human graveyard.  This was not an uncommon complaint.  Many graveyards did not allow pets to be buried in consecrated ground.  As a result, pet cemeteries were established.  One of the most well-known was the Hyde Park Dog Cemetery, opened in 1881.  As the name denotes, this was primarily a burial ground for dogs.  However, according to author Gordon Stables (qtd. in Animal Death 22), the cemetery also admitted the corpses of “three small monkeys, and two cats.”

Other pet cemeteries existed throughout Victorian England, both public and private.  The pet cemetery at the Essex seat of Sir Thomas Lennard had pet monuments dating as far back as the 1850s.  While the pet cemetery at Edinburgh Castle originated as a burial place for 19th century regimental mascots and officers’ dogs.  And I would be remiss if I did not mention author Thomas Hardy, who had a pet cemetery at his home at Max Gate in Dorchester in which all but one of the headstones were carved with the famous novelist’s own hands.

Unsurprisingly, the majority of headstones and monuments in pet cemeteries of that era are for dogs.  Dogs were incredibly popular pets during the 19th century.  They were typically viewed as selfless, devoted friends and guardians.  While cats were, to some extent, still seen as sly, self-serving opportunists (for more on this, see my article Peter Parley Presents the Treacherous 19th Century Cat).  In addition, as author Laurel Hunt points out in her book, Angel Pawprints:

“Queen Victoria’s fondness for dogs strengthened their role as companions in the Victorian era.”

This bias in favor of dogs had no effect on Victorian cat fanciers whatsoever.  Cat funerals continued to take place with just as much pomp and ceremony as dog funerals.  The public reaction to both was very much the same – amusement, outrage, and occasionally scorn.  One of my favorite examples of the latter is from an article in an 1880 edition of the Portsmouth Evening News which reports on a lady who sent out “black-edged funeral cards” upon the death of her dog.  As a sort of disclaimer, the article states:

“It is superfluous to affirm that the owner of that lamented Fido is a maiden lady.”

It does seem that a great many reports of pet funerals in the 19th century news involve some stereotypical variety of spinster – the Victorian cat (or dog) lady, if you will.  Though humorous, I do not believe this was the norm.  The simple fact is that, throughout history, there have been people who have grieved at the loss of their pets.  During the Victorian era, this grief took shape in elaborate pet funerals.  For cats, who were still persecuted in so many ways, these ceremonies strike me as especially poignant. 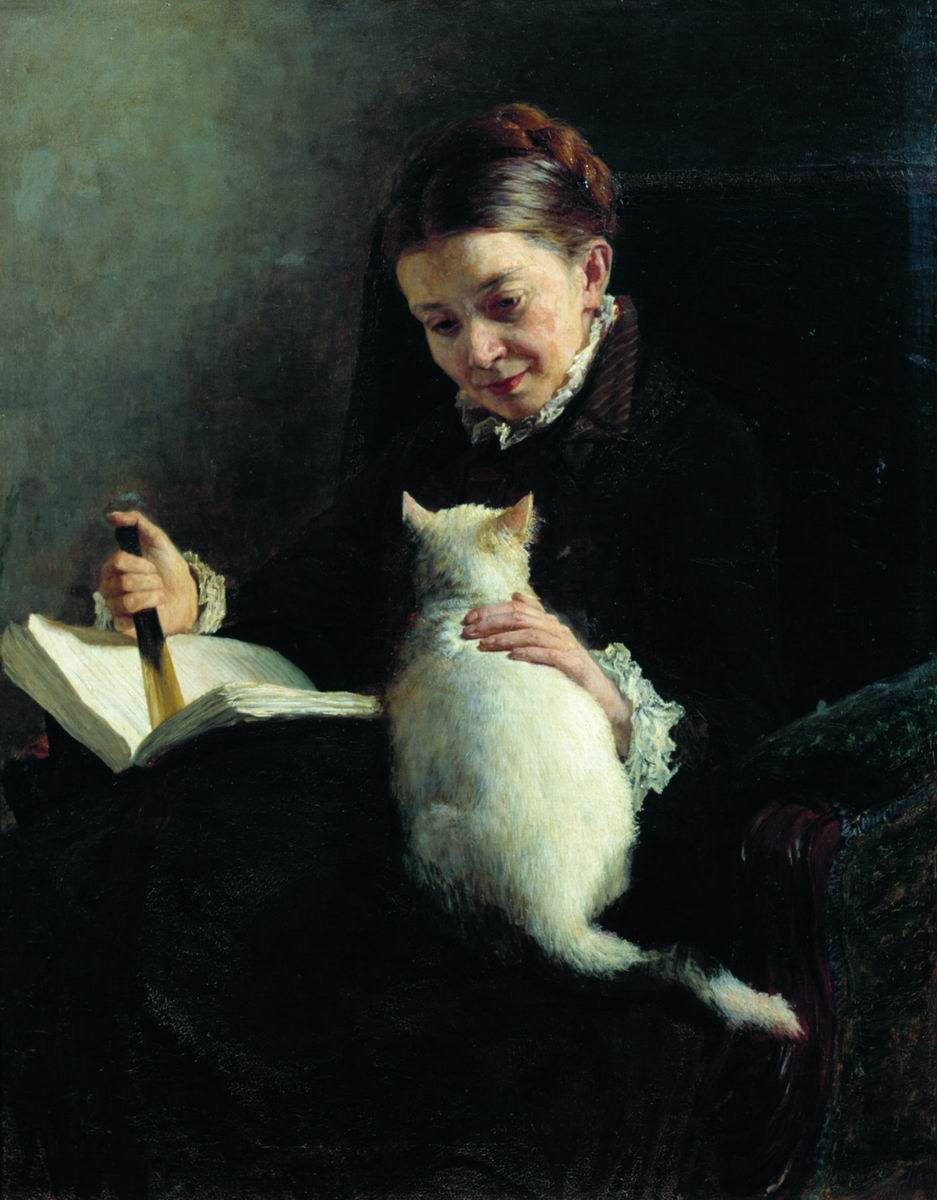 I close this article with poet Clinton Scollard’s 1893 elegy for his cat, Peter.  In her book Concerning Cats (1900), author Helen Winslow claims that this tribute to a deceased cat is the “best ever written.”  I’ll let you be the judge.

In vain the kindly call: in vain

The plate for which thou once wast fain

At morn and noon and daylight’s wane,

No more I hear thee purr and purr

As in the frolic days that were,

When thou didst rub thy velvet fur

How empty are the places where

Nor dreamed a dream of feline care,

The sunny haunts where, grown a cat,

You pondered this, considered that,

The cushioned chair, the rug, the mat,

Although of few thou stoodst in dread,

How well thou knew a friendly tread,

And what upon thy back and head

A passing scent could keenly wake

Thy eagerness for chop or steak,

Yet, Puss, how rarely didst thou break

Though brief thy life, a little span

Of days compared with that of man,

The time allotted to thee ran

Now with the warm earth o’er thy breast,

O wisest of thy kind and best,

**This article is an excerpt from Mimi Matthews’ book The Pug Who Bit Napoleon: Animal Tales of the 18th and 19th Centuries.