The Evolution of the 19th Century Gown: A Visual Guide

The silhouette of women’s gowns changed a great deal over the course of the 19th century. Most of us can easily identify the lines of an early Regency gown or the shape of a late-Victorian dress with a bustle.  But what about those transitional years?  The 1820s, 1830s, and 1870s, for example.  Sometimes styles of these decades are harder to pinpoint.  With that in mind, I present you with a decade-by-decade visual guide to silk gowns of the 19th century.

*All of the images of gowns are courtesy of The Costume Institute at The Metropolitan Museum of Art.  If you click an image here, it will take you straight to their website where, in many cases, you can see multiple views of the gown as well as close-up images of stitching and trim.

To usher in the century, here is an elegant striped silk British dress from 1800.

A festive 1811 British ballgown of gold and lace fabric trimmed with pearls.  For reference, this is the decade of most of our Jane Austen and Georgette Heyer heroines.  Pride and Prejudice was published in 1813 and Heyer’s Regency Buck was set in 1811.  Which heroine do you suppose would look best wearing this gold confection? 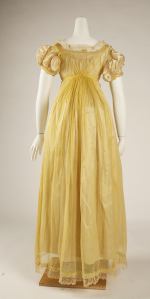 A lovely printed silk British dress  from 1820.  Note the addition of flounces, belt, and trimmings!

A beautiful floral and striped silk British gown from 1836.  As a point of reference, this is the decade in which George Eliot set her novel, Middlemarch.  Perhaps the below gown is one that Rosamond Vincy might have worn?  Failing that, it could just as easily have been in the wardrobe of one of the characters in Elizabeth Gaskell’s Wives and Daughters (which was set in the same decade).

An 1842 British gown of floral-patterned silk.  Gowns of the 1840s were often severe, but the pattern of this dress makes it appear much softer and more feminine than others of the decade. 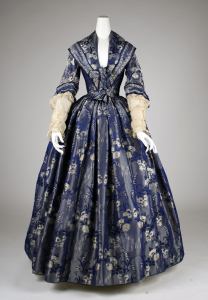 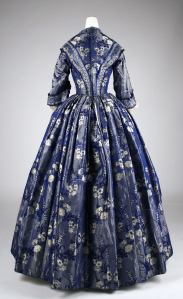 A very pretty 1850 British gown made of silk and flax.  The 1850s were the decade in which Elizabeth Gaskell set her novel North and South.  I wonder if Margaret Hale could have bought a gown like the one below in Milton?

A stunning Emile Pingat French silk ballgown, circa 1864.  Notice the increase in the width of the skirts.  During the 1860s, the popularity of the crinoline was at its peak! 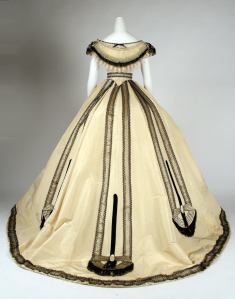 A gorgeous green silk British dress from 1870.  By the late 1860s/early 1870s, the crinoline had fallen out of favor.  The size of skirts reduced to more manageable proportions, with the bulk of the fabric now drawn to the back of the dress in elegant—and sometimes elaborate—draping.  This is generally known as the “first bustle era.” 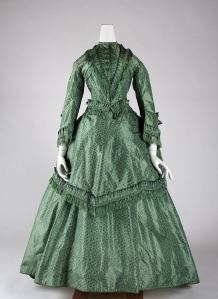 A brown silk and velvet American gown from 1884.  This is what is known as the “second bustle era.”  Gowns were made of heavier fabric and trimmings, while the bustle itself grew to enormous proportions.  It was at its biggest by the middle of the decade, but reduced to a more modest size by 1890. 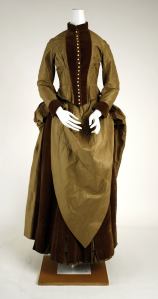 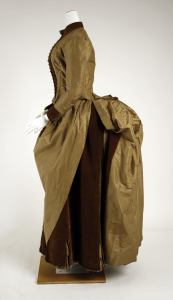 For our final gown of the 19th century, here’s an 1893 silk and wool evening dress trimmed with rhinestones. 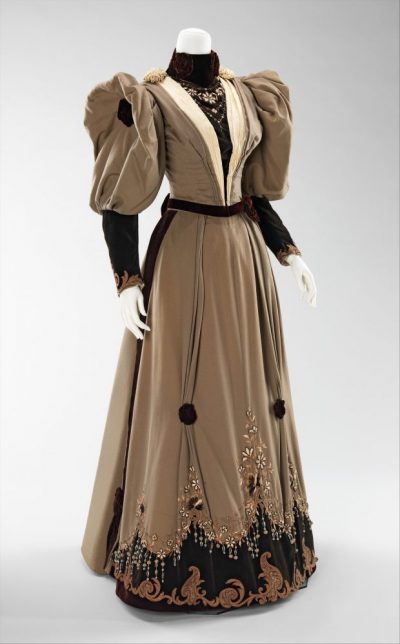 I hope you have found the above to be a useful basic visual guide to the evolution of the 19th century gown. Of course, there are infinite variations on each of these styles.  Fabrics varied.  As did prints, patterns, and colors.  And as for trimmings—some gowns were edged with pearls or jewels.  Some with fragile, expensive lace.  And some with fringe or even fur.  The only limit for a lady was her budget and her own good taste (or the good taste of her modiste!).