Villains, Shysters, and Pettifoggers: The Lawyers and Law Clerks of Bleak House 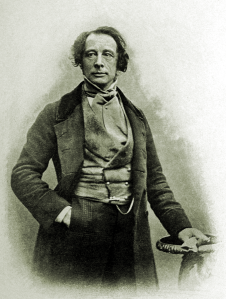 In my last article on Law and Literature, I discussed the workings of the early nineteenth century British Court of Chancery, both in reality and as portrayed by Charles Dickens in his magnificent novel, Bleak House.  Such a serious subject in a work of fiction, especially one written in serial form for the Victorian masses, must necessarily be offset by a strong cast of characters with whom the reader can relate.

As always, when it comes to depicting the frailties of human nature, Charles Dickens does not disappoint.  From the noble to the ridiculous, we are given a glimpse of the people whose lives have been touched by the infamous lawsuit of Jarndyce and Jarndyce.  And none of them are more fascinating than the range of lawyers and law clerks that navigate (with varying degrees of skill) the murky waters of Chancery dysfunction.

In light of the fact that we now know there were a few good attorneys around Chancery in that era, it is interesting to see that most of the legal professionals in Bleak House are sinister villains, shysters, or “narrow, mean, ignorant pettifoggers.”  However, in this novel especially, Dickens is more satirist and caricaturist than impartial historian and his depictions of Mr. Tulkinghorn, Mr. Vholes, and Guppy the law clerk are written so masterfully that it is hard to take issue with any inaccuracy. 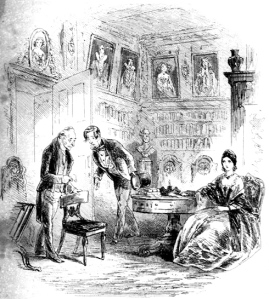 “The Old Man of the Name of Tulkinghorn”
by Phiz (Hablot Knight Browne) for Bleak House, 1853. Image scan and text by George P. Landow.

Mr. Tulkinghorn, the esteemed attorney of Lord and Lady Dedlock, is respected by both the courts and the community.  Instead of having “foggy glory” around his head, as does the Lord Chancellor, Tulkinghorn is “surrounded by a mysterious halo of family confidences” of which he is known to be the “silent depository.”  He is compared to a mausoleum, except that, according to Dickens, mausoleums hold fewer secrets.

Tulkinghorn has no life outside of the law.  He is welcomed as a silent observer at the tables of fine country houses, but he “never converses when not professionally consulted.”  He lives and works in what was once a great house of state and is now set off into chambers where “lawyers lie like maggots in nuts.”  Everything within “that can have a lock has got one; no key is visible.”  And, unlike the Court of Chancery which thrived on its scores of underlings, Tulkinghorn will have no clerk.  He does not want to share a single confidence.  He knows the value of his vault-like secrecy.

In contrast to Tulkinghorn, Mr. Vholes, the lawyer who eagerly dupes Richard Carstone into pursuing his rights in the Jarndyce case, does not appear to have ever been welcomed into anyone’s home – great or otherwise.  In fact, Mr. Vholes freely admits that were he to partake of solid food in company, he wouldn’t know “what the consequences would be.”  He is described as having a cold-blooded, gasping, fishlike manner and, in repose, of picking at “one of the red pimples on his yellow face with his black glove.”  He confesses that he is not a “man of capital” and blames his depressed economic circumstances on the three daughters that he is raising at home.

Mr. Vholes has his offices in a “little, pale, wall-eyed, woebegone inn, like a large dust-bin.”  His office itself is squeezed into a tiny corner and “blinks at a dead wall.”  The quarters are so small and cramped that the one clerk assisting Mr. Vholes can open the door without even getting up from the stool on which he sits. 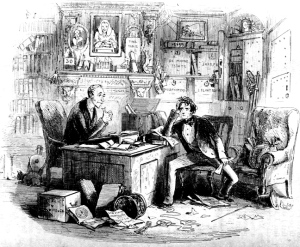 When Dickens describes the “three feet of knotty floored dark passage” that bring a potential client to Mr. Vholes’s “jet black door” it is easy to surmise what sort of desperate individual that poor fellow might be.  Indeed, Mr. Vholes is only too happy to pursue Richard Carstone’s claim in Jarndyce and Jarndyce, despite it being common knowledge that it is a futile enterprise and that Carstone has no money.

Mr. Vholes considers that the question of “Right and Wrong” is an extraneous consideration and that the only relevant question is “one of injury or advantage to that eminently respectable legion, Vholes.”

At the close of the novel, when it is learned that Jarndyce and Jarndyce has been settled, but that the whole estate has been absorbed in costs, Mr. Vholes immediately abandons Richard Carstone in the gallery and giving “one gasp as if he had swallowed the last morsel of his client” glides away through a door at the end of the hall.

“The Young Man of the Name of Guppy”by Phiz (Hablot Knight Browne) for Bleak House, 1853. Image scan and text by George P. Landow

When it comes to law clerks, though Dickens was once himself a law clerk and might have spared a little kindness, instead he gives us Mr. Guppy.  Guppy is, at best, a zealous clerk in the law firm of Kenge and Carboy.  At worst, he is a grasping, pretentious, legal acolyte.

So desperately does Guppy desire to be one of the legal elite that he cannot even divorce himself from legalese when proposing marriage to the woman he loves.  Before tendering his proposal to Esther Summerson, he asks for a guarantee that his statements will be in “total confidence” and taken “without prejudice.”  Once assured that the communication will be confidential, he asks Esther if she would be so kind as to allow him to “file a declaration – to make an offer.”

When Guppy later meets Esther, disfigured by small pox, he goes to great pains to make her understand how the law of contracts applies to his first offer of marriage:

“I did myself the honor of making a declaration which…you was so good on that occasion as to repel and repudiate…such a declaration of my part was final, and there terminated.” 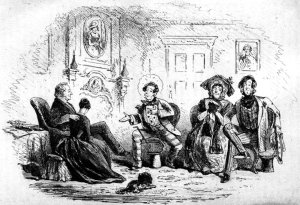 Guppy is so mindful of his legal aspirations, perhaps hoping to one day be a man like Tulkinghorn with no divide between his personal and professional life, that he chases Esther down the street, where she has met up with a friend of hers, only to have her repeat again her admissions in front of a witness.  When she states that there is “no proposal or promise of marriage whatsoever between this gentleman (and)” he quickly interjects “William Guppy of Penton Place, Pentonville in the county of Middlesex” so that she will repeat his name and address in full – for the record.

Mr. Tulkinghorn, Mr. Vholes, and Mr. Guppy are by no means the only legal professionals that Dickens has subjected to the sharp edge of his quill pen.  Lawyers feature heavily in many of his novels.  There is the law firm of Messrs. Dodson and Fogg in The Pickwick Papers.  Mr. Sampson Brass in The Old Curiosity Shop.  Mr. Jaggers in Great Expectations.  And of course, barrister Sydney Carton in A Tale of Two Cities.  Complex characters all and while some of their qualities bear hints of truth (indeed, I believe I sat beside a Mr. Guppy in law school), they are still purely works of fiction – designed above all to entertain.

Stewart, James. Suggestions as to Reform in Some Branches of the Law. London: V & R Stevens and G.S. Norton, 1852.

John Eyre
A Tale of Darkness and Shadow

Yorkshire, 1843. When disgraced former schoolmaster John Eyre arrives at Thornfield Hall to take up a position as tutor to two peculiar young boys, he enters a world unlike any he’s ever known. Darkness abounds, punctuated by odd bumps in the night, strange creatures on the moor, and a sinister silver mist that never seems to dissipate. And at the center of it all, John’s new employer–a widow as alluring as she is mysterious.

Sixteen months earlier, heiress Bertha Mason embarked on the journey of a lifetime. Marriage wasn’t on her itinerary, but on meeting the enigmatic Edward Rochester, she’s powerless to resist his preternatural charm. In letters and journal entries, she records the story of their rapidly-disintegrating life together, and of her gradual realization that Mr. Rochester isn’t quite the man he appears to be. In fact, he may not be a man at all.

From a cliff-top fortress on the Black Sea coast to an isolated estate in rural England, John and Bertha contend with secrets, danger, and the eternal struggle between light and darkness. Can they help each other vanquish the demons of the past? Or are some evils simply too powerful to conquer?

“[Matthews] retells Charlotte Bronte’s classic story in a way that will keep fans of the original novel totally gripped from cover to cover… Fresh and dynamic… Fast-paced and spellbinding…a book you will have a hard time putting down.” -Readers Favorite

“One of the most moving, suspenseful, innovative and remarkable retellings of a classic in the history of, well, ever… Every page is sheer rapture as [Matthews] moulds popular source material into a spell-binding creation so wholly her own.” -Rachel McMillan, bestselling author of The London Restoration

Charles Dance made a magnificent Tulkinghorn in the 2005 BBC production. He positively frightened me with his characterization of that lawyer’s hounding of Lady Dedlock.

You are so right! Now, whenever I read anything about Tulkinghorn, I imagine Charles Dance and not the elderly figure from the original Bleak House illustrations. But then, I do love Charles Dance ;)

Reblogged this on Bevieann61's Blog 2 and commented:
Great article

Thanks for the reblog, Bevieann! So glad you liked my article :)